In October 1991, the final course of the proposed Channel Tunnel Rail Link (CTRL) had been determined, after much political wrangling over less popular, albeit cheaper, alternatives. Next came the process of ''furnishing'' the line with stations, maintenance depots, and sidings. Essentially, the CTRL's primary role was to provide a high speed route between the capital and the Chunnel portal for passenger services. However, it was quickly reiterated that the line was as much a freight artery as it was a passenger route, and that the infrastructure would reflect this. The implications of this were significant: by definition, freight trains are heavier and slower than passenger trains, and have the potential to hold up the faster express services. From the outset, the CTRL had to be designed in such a way to make it suitable for both high speed passenger trains of 19-tonne axle weight and slow speed freight trains of 23-tonne axle-weight. For instance, steep gradients which could easily be tackled by a ''Trans Manche Super Train'' Eurostar set could potentially reduce a freight to an unacceptably low speed, thus track cant level had to be less severe than that of a dedicated passenger line. Secondly, the dual-use scenario gave rise to the concept of ''freight loops''. These would allow freight trains to temporarily leave the main running lines to clear the way for an oncoming passenger service.

In the House of Commons on 16th January 1995, the then Secretary of State for Transport, Dr Brian Mawhinney, stated that the provision of passing loops at Charing Heath was a possibility. On 20th July of the same year, the House of Commons Select Committee formally confirmed that two sets of freight loops should be installed along the extent of the CTRL. The selected locations were Singlewell (Gravesend) and Charing Heath, which provided passing locations for passenger services over freight trains at approximately ⅓ and ⅔ of the length of the CTRL from London. In November 1995, the Government confirmed that it had accepted the Select Committee's proposal and freight loops at these locations would be enshrined within the CTRL Bill of 1996.

Charing Heath Loops (or ''Lenham Loops'') resided upon the border of two CTRL building contracts: Nos. 420 and 430. The latter was awarded to ''Kværner Construction'' (later absorbed into ''Skanska Construction UK Ltd''), and this firm was responsible for building of CTRL infrastructure between Lenham Heath (exclusive) and Ashford. Construction works for Contract 430, worth £150 million, formally commenced on 1st October 1998. Contract 420, worth around £140 million, concerned the section of the CTRL between Boxley (four miles north of Maidstone) and Lenham Heath, and was awarded jointly to ''Hochtief'' and ''Norwest Holst'' in March 1999. A third building contract is of relevance to this section: No. 570. This involved track laying and catenary installation along the entire CTRL, and was awarded to ''AMEC Spie Rail Systems Ltd'', with an estimated value of £120 million. Twin-block sleepers, designed specifically for high speed lines, were produced for AMEC by ''Stonna Bonna'', the latter a UK-based concern specialising in concrete manufacture for road, rail, and water industries. ''Up'' and ''Down'' freight loops at Charing Heath would extend for a length of 1⅓-miles, making them capable of accommodating the longest of freight trains. 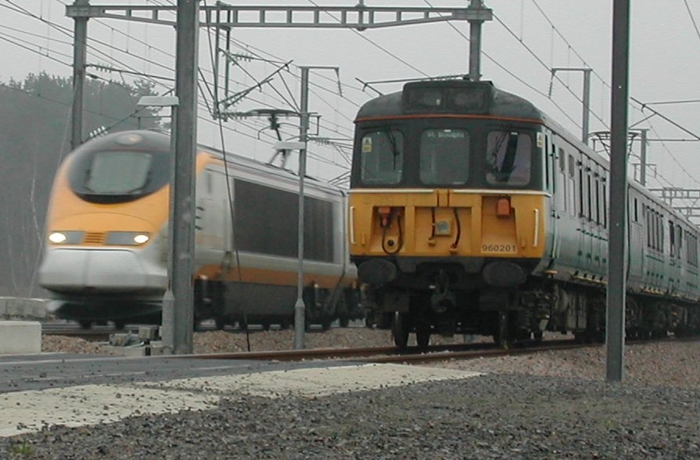 Overtaking in action: a Trans Manche Super Train is seen passing the Hitachi Verification Train at the ''country'' end of Charing Heath loops. The V-Train was a converted Class 310 EMU, used to test Hitachi's ''A-Train'' technology on AC and DC lines, as part of the Class 395 project. © Ian Milligan 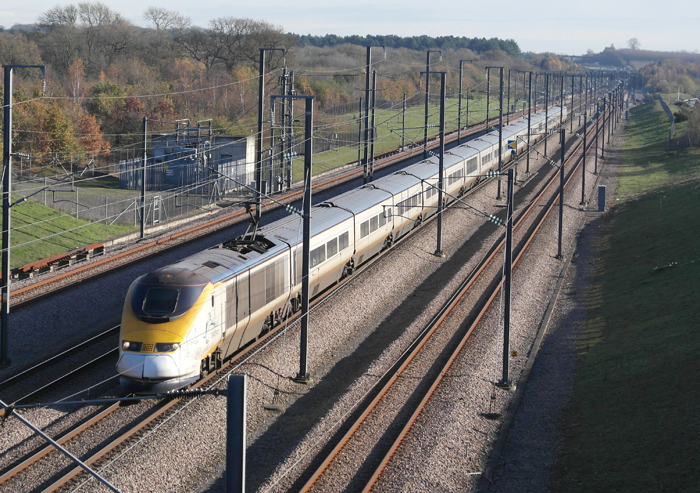 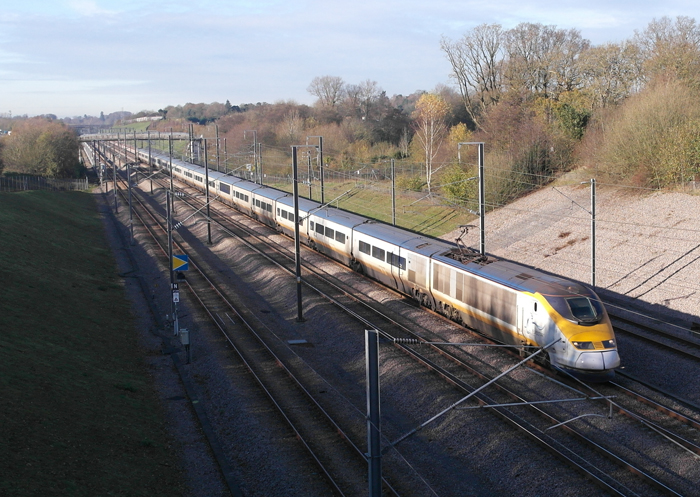