During the peak times there would be, on average, seven trains in each running tunnel at any one time, thus a total of fourteen under the English Channel, comprising a mixture of Shuttles, Eurostars, and freights. In the future, Britain’s high-speed Channel Tunnel Rail Link would be controlled from a computerised signalling centre at Ashford, but the actual Channel Tunnel and terminal system were to be operated from a pair of control centres – one at the Cheriton Terminal and another at Coquelles. Similar to control towers at airports, these tall white-painted buildings would afford an unrivalled view across the terminal areas. A giant illuminated signalling diagram – destined to become the largest LED (Light Emitting Diode) displays in the world – was to be present in each control room, allowing operators to pinpoint the exact positions of trains within the tunnel and terminal areas. The entire Eurotunnel layout was to use the TVM430 (TVM: Transmission Voie Machine) signalling system, a modernised version of the existing TVM300 signalling used on the high-speed TGV line between Paris and Lyon. Locomotives equipped with TVM430 equipment would be able to operate over TVM300 lines, but the reverse would not be possible. The entire Chunnel system, including the terminals, was to be operated by just one of the control centres mentioned, and this role would usually fall to the Cheriton installation. These control towers would also be responsible for controlling terminal road traffic. Both control rooms were to be equipped with a back-up power supply, should the electricity mains be cut off. Planned for each terminal were huge electricity sub-stations: that at Cheriton was to be positioned to the north east of the tracks, and measure some 590-foot long by 260-foot wide.

As mentioned earlier, Coquelles was to house the core engineering facilities to maintain the shuttle fleet, although a smaller affair would be present at Cheriton. An 8000 square foot workshop was to be positioned at the south west corner of the terminal, within the arrival curve, and would be joined by four shuttle stabling lines and an array of maintenance sidings. In the company of the tunnelled double-track arrival curve would be a third line; this would connect the shuttle stabling sidings with the platforms. By April 1992, the workshop and maintenance sidings had been completed, and since the beginning of that year, this area had been used to stable permanent way trains.

Queen Elizabeth II and French President Mitterrand formally opened the Channel Tunnel and shuttle terminals on 6th May 1994, with much ceremony. On 10th December of the previous year, TransManche Link (TML) had disbanded as a result of the Channel Tunnel handover to Eurotunnel. Thereafter, commissioning of traffic would be piecemeal, and the first commercial trains to use the Chunnel were freight services, these commencing on 1st June 1994. The Chunnel terminals did not see their first customers until 25th July of the same year, which marked the inauguration of the freight shuttle service. It was not until Christmas that leisure travellers could use ‘’Le Shuttle’’, the passenger services starting on 22nd December. The latter had been preceded on 14th November by the running of the first Eurostar services from Waterloo. By October 1995, the shuttle terminals were handling a full range of road traffic: coaches and campervans had been permitted on services from 26th June and 29th September respectively.

On 18th November 1996, disaster struck: a cornflakes lorry caught fire on a Britain-bound shuttle within the southern running tunnel. Damage was to the extent that a large section of this particular tunnel had to be closed for nearly six months, whilst over 655 yards of lining was replaced. The whole tunnel blockade cost Eurotunnel £191 million, a figure which was met by the company’s insurers.

On 8th May 1998, it was announced that the branding of ‘’Le Shuttle’’ was to be dropped, and the shuttle service would become plain ‘’Eurotunnel’’. This course of action was in response to the claim by the company’s Board that the existing name was confusing for the Chunnel’s French users. In the meantime, HGV custom had been growing steadily, and measures were put in place to facilitate further expansion of such traffic. The launching of the ‘’Arbel’’-type freight shuttle rolling stock on 11th January 1999 had set the ball rolling. Nine ‘’Arbel’’ shuttle fleets were commissioned, each comprising thirty HGV-carrying vehicles, a trio of loading/unloading flat wagons, and an air-conditioned club car. The ‘’Arbel’’ vehicles are easily distinguished from the earlier freight wagons introduced by Eurotunnel; they lack the extensive lattice framework of their older counterparts, which means they require less maintenance and are of reduced weight. To accommodate increased shuttle movements, an additional island was brought into use at Cheriton during October 2002, to the north of the existing surfaces, creating a total of ten platform faces. The increase of platforms here was matched at Coquelles, with the commissioning of two additional platform faces. 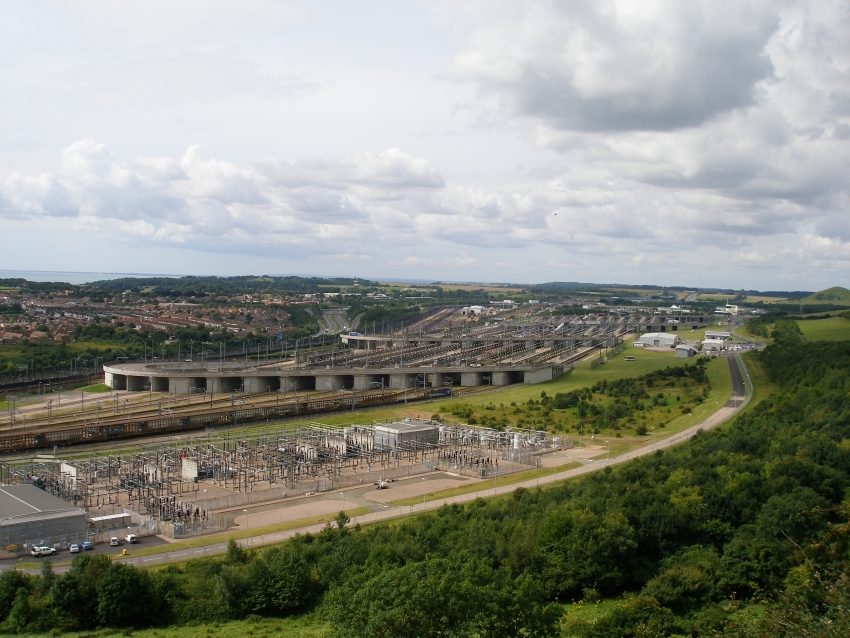 A westward view from the North Downs reveals the extensive terminal site, complete with the huge electricity sub-station in the foreground. The large concrete-built bridges, which link the road system with the terminal platforms, dominate the scene. In the background, left of centre, can be seen the M20, whilst to the right of this can just be seen the maintenance depot and sidings. © David Glasspool 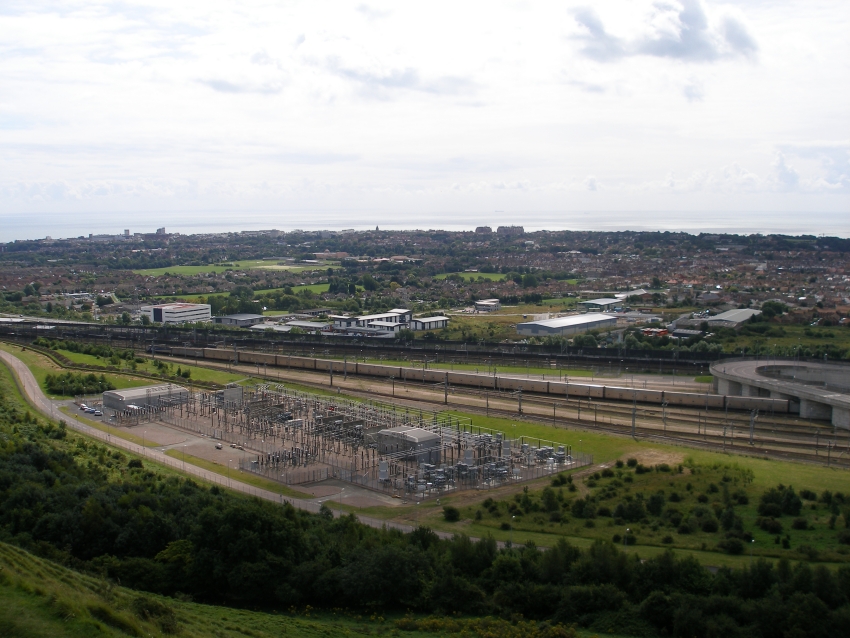 A southward view shows Folkestone in the background, with the English Channel beyond. A passenger shuttle is observed leaving the terminal: all twelve single-decked wagons of the first rake are in view. Hidden by the bridge support is the telescopic unloading wagon, which in turn is connected to the second rake of twelve vehicles, the latter being double -decked wagons. In the foreground is the electricity sub-station. © David Glasspool 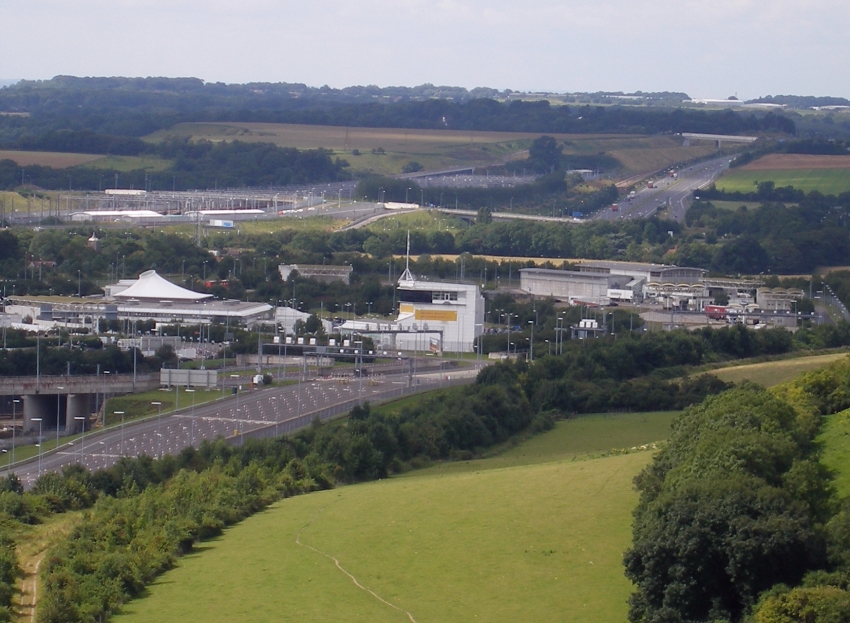 In view is the Cheriton Control Tower, which oversees the operation of the terminal's road and rail networks. It is home to the world's largest LED display panel, which illuminates a signalling diagram of the entire Eurotunnel system. © David Glasspool 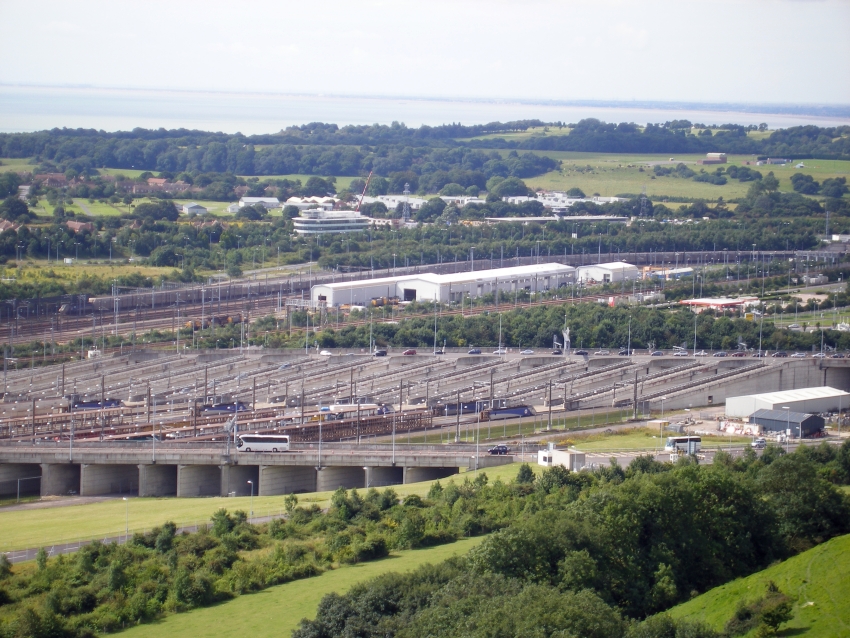 In the background of this view is the diesel-electric maintenance depot. Of the two main rail-served buildings, the largest measures some 475 feet by 75 feet, whilst the smaller structure is approximately 335 feet by 35 feet. From the outset, Eurotunnel had five diesel-electric locomotives, which were used for hauling maintenance trains through the tunnel, but also for rescuing stricken shuttles. The depot and shuttle stabling sidings are separated from the main terminal complex by the lines from the capital. © David Glasspool