Meanwhile, whilst CSC was installing First Class into former 319/0 units, on the Thameslink operation, First Class was being removed from all twenty-six 319/2 formations. This programme, which began in 1997 at Eastleigh Works and was implemented over a two-year period, increased available seating from 272 (including 16 First Class seats) to 308. These units, re-classified as 319/3, were destined for the suburban ‘’City Metro’’ services. Conversely, the same operator sent Nos. 319021 to 319060 to Wolverton for the insertion of First Class seating, this batch subsequently being employed on ‘’City Flyer’’ services between Bedford and Brighton. The type became subclass 319/4.

Mention should also be made of a small number of major service alterations. By the end of 1995, Class 465/466 ‘’Kent Link Networkers’’ had overcome initial teething troubles and all members had been deployed into service. This, combined with the 1996 privatisation of the former Network SouthEast operation, saw the withdrawal of the Thameslink service to Sevenoaks. In its place, a limited peak-time ‘’Networker’’ service was to be operated between Sevenoaks and City Thameslink by franchise holder ‘’Connex South Eastern’’. The Connex Express Class 319 service has already been mentioned, but also of significance to the Central Division was the commencement of a through service from Gatwick Airport to Rugby. This started on 1st June 1997 with the Summer timetable, operated by Connex South Central. Rugby presented the advantage of having underused bay platforms, thus acted as an ideal terminating point for services from the south. The service was scrapped after the implementation of the Summer timetable in May 2002.

Two units, Nos. 319008 and 319009 had two claims to fame over the 1993/1994 period. In 1993, the pair was dispatched to Chart Leacon Depot, Ashford, to receive modifications which would allow a higher vertical extension of the pantographs. The units were scheduled to transport a party of guests through the then recently completed Channel Tunnel, and the pantograph alterations were made in light of the higher level of the overhead wires, compared with those on the British Rail network. The Chunnel run, which took place on 10th December 1993 between the Folkestone terminal at Cheriton and that at Calais Fréthun, marked the disbanding of Chunnel building consortium TransManche Link, and the takeover of operations by Eurotunnel. The large loading gauge at both terminals resulted in considerable gaps between the platform surface and the side of the vehicles, which required planks to bridge the gap when embarking on and alighting from the units. A second Channel Tunnel appearance for the pair occurred on 7th May 1994 as part of the ‘’Folkestone 1994’’ French-themed celebrations. The units departed from London Victoria’s platform 2 at 07:52 for Cheriton. Here, the units took passengers only 2½ miles into the tunnel, terminating at a diamond crossing and running back to Sandling station, where shuttle services to and from the tunnel were run for the remainder of the day. To mark the event, Nos. 319008 and 319009 were named ‘’Cheriton’’ and ‘’Coquelles’’ respectively, and both received plaques on the motor carriages commemorating the fact that they were the first units to carry fare-paying passengers into the Channel Tunnel. The plaques were accompanied by the Union Jack and Tricolor Flags. 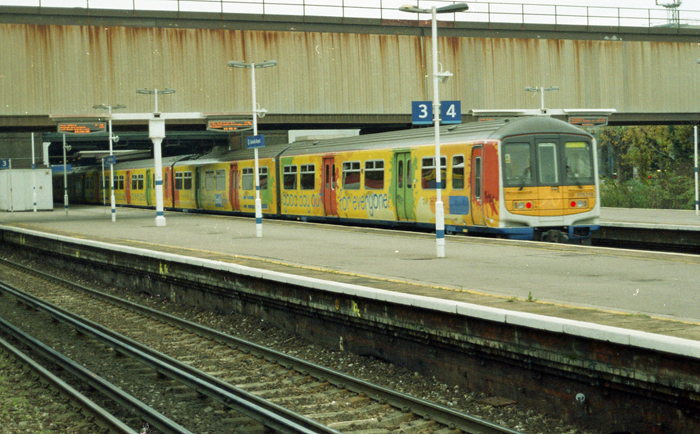 Another advertising scheme presented itself on a Class 319 at Gatwick Airport. This colourful livery promoted a crèche located at Victoria. The unit is another of the former "Connex Express" fleet, being No. 319218. © David Glasspool 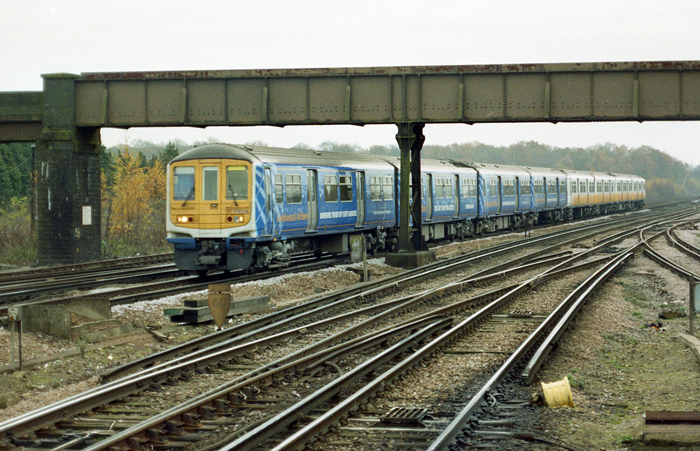 One of the former ''Connex Express'' units, No. 319214, is seen trundling into Gatwick Airport, leading a second 319 unit which wears the original Connex South Central scheme. © David Glasspool 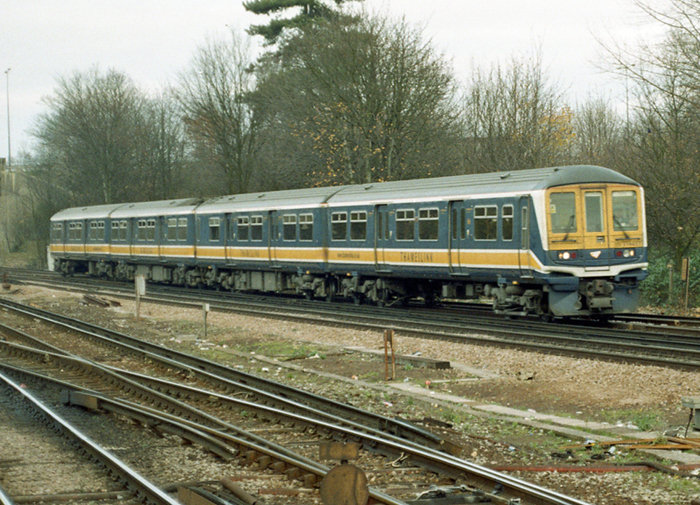 From late 1994 onwards, when ''Thameslink'' became a standalone shadow franchise in the run up to privatisation, NSE livery began giving way to an all-over plain white scheme. The latter had a symbol depicting the London skyline superimposed, complete with the word ''Thameslink'' in plain blue. An uninspiring scheme, this swiftly became dubbed the ''Graffiti'' livery. By 1997, when applied to a handful of units, this itself started being replaced by the livery seen in the above picture, worn by No. 319437 on the approach to Gatwick Airport. © David Glasspool