This was once a fleet of twelve locomotives involved in what transpired to be a rather unfortunate chapter in Channel Tunnel passenger service history. In November 1990, "European Passenger Services Ltd" (EPS) was set-up as a wholly-owned subsidiary of the British Rail Board to manage the proposed daytime international passenger services between London, British provincial cities, Paris, and Brussels. These were to be procured as a joint effort between EPS, SNCF, and SNCB, and the wheels were set in motion on 18th December 1989 when a contract was signed with GEC-Alsthom for the construction of thirty Trans Manche Super Trains.

In addition to the daytime services, a series of overnight sleeper trains were also planned to run through the Chunnel. These were promoted under the "Nightstar" brand and to manage this project, "European Night Services Ltd" (ENS) was established in 1992. ENS was a collaboration between EPS, SNCF, Deutsch-Bahn (DB), and Nederlandse Spoorwegen (Netherlands Railways). London, Edinburgh, Glasgow, Plymouth, Swansea, Paris, Brussels, Amsterdam, Cologne, Dortmund, and Frankfurt were all outlined as potential recipients of the sleeper trains, these of which are looked at in greater detail in the Nightstar section of the website. However, to set the scene, a £120,000,000 order was placed with a reluctant GEC Alsthom at Washwood Heath, Birmingham, for the construction of 139 passenger vehicles for the sleeper operation.

"Nightstar" services from Glasgow and Edinburgh would head south via West Coast and East Coast Main Lines respectively, and remarshalling of the trains would take place at Kensington Olympia before onward travel to the Chunnel. To haul the sleepers along these electrified routes and for passage through the Chunnel, seven Class 92 locomotives were ordered from Brush Traction Ltd at Loughborough in July 1990, each costing £3,000,000. However, those "Nighstar" trains emanating from Plymouth and Swansea, which used the Great Western Main Line to reach London, required diesel power as far as Kensington Olympia. The option of procuring a brand new diesel locomotive for this purpose was initially considered, but subsequently dropped. This was because the cost of building a relatively small number of diesel locomotives equipped with Electric Train Supply (ETS) to form a dedicated "Nightstar" fleet would be very expensive. As a result, ENS turned to the existing British Rail pool of diesels and in 1994, twelve Class 37 locomotives were selected from the TrainLoad freight sector to form a dedicated fleet for the Nightstar operation.

British Rail Maintenance Limited (BRML) Doncaster was awarded the contract to overhaul and modify the selected Class 37 locomotives. This included a complete overhaul of mechanical components, separation of the crank shaft from the engine, and bodywork restoration; known in the trade as a "G" exam. The bogie sets on all twelve were replaced by those salvaged from withdrawn Class 50 diesels and re-gearing increased the top speed from 80 MPH to 90 MPH. Fitted with vacuum braking when first introduced, all Class 37s were later converted to dual braking (i.e. vacuum and air); however, the vacuum equipment was removed from the "Nightstar" locomotives during overhaul and UIC (Union International des Chemin de fer) air brake pipes incorporated. ENS 61-way through train jumper connections were installed to make the locomotives and "Nightstar" carriages compatible with each other, Railway Clearing House (RCH) communication jumpers fitted, and standard coupling gear was retained.

In addition to those modifications already mentioned, the selected Class 37s were also wired for Electric Train Supply. However, the power for this would not come from the locomotives themselves, but rather a pool of generator vans dedicated to the "Nightstar" service. Five BR Mk 3 ex-sleeper cars were selected for conversion to this role. Originally, 120 of these vehicles had been ordered for construction at Derby from 1981 to 1984 for a market which was already in steady decline. Faster InterCity daytime services, combined with competing air travel, had eaten into the railway sleeper train business and the provision of Mk 3 vehicles for the latter, capable of 100 MPH running, was an attempt to regain some ground. Sadly, the demand never reached a level to justify such a large carriage fleet, which saw many of the Mk 3 sleeping cars become surplus to requirements early on.

For their new role on the Nightstar services, the ex-sleeper Mk 3 vehicles were to be equipped with a pair of diesel generators and associated fuel tank, and be re-wired for ETS operation. Technical details aside, the most interesting aspect of these carriages was how they would work in conjunction with the Class 37/6 fleet. To ensure the schedules of the Swansea and Plymouth sleepers ran to time, the plan was to have two diesel locomotives fronting each "Nightstar" formation, the latter of which would comprise seven passenger vehicles. The customary arrangement would then have been to sandwich the Mk 3 generator car in-between the sleeper stock and locomotives on all workings. However, from an operational viewpoint, this would result in a complex shunting arrangement at the end of each journey: not only would the Class 37s have to run round the coaching stock, but they would also have to switch to the opposite end of the generator car in a separate movement and re-attach it to the front of the train. The solution devised was novel and the final proposal was to have the generator car sandwiched in-between the locomotives, as per the below formation:

Therefore, this "top-and-tailing" of the generator car ensured that simple runaround manoeuvres at the end of each journey ultimately had a locomotive leading.

The Class 37/6 fleet would also not necessarily be limited to the "Great Western" lines. Engineering works on the ECML/WCML which required traversing non-electrified sections of route would call for diesel haulage on Scottish sleepers. On the daytime side of the operation, the locomotives could also be used, too: should the usual West London Line course between North Pole Depot and Waterloo International be blocked, Class 37/6s were intended to front TMSTs on a diversionary route from Kensington Olympia to Clapham Junction, via Willesden, Acton Central, and Barnes Bridge. The diesels could also be used to haul any failed "Eurostar" units. Given that the locomotives kept standard coupling gear, "barrier" wagons were procured to enable the fleet to be coupled to the TMSTs.

On 31st January 1995 the first of the overhauled "Nightstar" Class 37s, No. 37601, was formally handed over to EPS at Doncaster Works. The upper third of the bodyside was painted in "Executive Grey", the lower bodyside in light grey, and the roof in dark blue. Cast Channel Tunnel roundels were carried on both sides, and at one end the locomotive number and "EPS" branding was applied below the cab window. Snowploughs were fitted, but by May 1995 these had been removed, and by October of the same year the "Executive Grey" of the upper bodyside had been replaced by a lighter "Flint Grey" shade.

Official allocation of the type from the outset was to St Philips Marsh Depot (Bristol), which was geographically suitable to cover Plymouth and Swansea sleepers from a single base. Whilst the fleet could also be stabled at North Pole Depot for any Class 373 drags, maintenance work on them here was prohibited, because the site did not have the required environmental protection in the event of a diesel spillage. Therefore, some members were stationed at nearby Old Oak Common.

For the electric side of the operation, the first Class 92 was formally handed over to EPS at Waterloo International on 1st February 1995. On 29th February of the following year, the British Rail portions of EPS and ENS entities became part of the private consortium "London & Continental Railways", which had been announced as the preferred bidder to build and operate the proposed Channel Tunnel Rail Link. Whilst daytime London to Paris/Brussels services had been running since 14th November 1994, the "Regional Eurostar" and "Nightstar" operations were still distant.

L&CR made known that the existing "Eurostar" services were carrying much lower passenger numbers than originally forecast and soon after construction of the CTRL got underway, the company found itself in financial difficulties. This resulted in the Government stepping in to assist in February 1999, taking a large share of the firm at this time. Cost-cutting was the order of the day and in 1997, both "Nightstar" and "Regional Eurostar" schemes were put on hold. Their fate was sealed on 9th July 1999, when the two were formally cancelled.

What now for the stock procured for the "Nightstar" operation? The sleeper vehicles were placed into secure storage at MOD Kineton, Warwickshire, and the Class 92s offered for sale. No buyer could be found for the latter and the seven-strong fleet went into storage at Crewe Electric Depot. The Class 37/6 fleet had started to disband as early as 1997, when the "Nightstar" scheme was initially put on hold. In that year, Nos. 37607 to 37612 were taken on by "Direct Rail Services" (DRS), a freight operator established in 1995 as a wholly-owned subsidiary of "British Nuclear Fuels" for the movement of nuclear material. The rest were retained by EPS for TMST drags, although the pool was further reduced in size in 2002 when another three class members, Nos. 37602, 37605, and 37606, became part of the DRS fleet.

Nos. 37601, 37603, and 37604 remained at North Pole Depot as "Thunderbird" locomotives. On 7th October 2007, maintenance of the Class 373 formations was transferred to Temple Mills Depot prior to Section 2 of the CTRL from St Pancras to Southfleet Junction opening to scheduled passenger traffic. That saw No. 37604 being cast off to DRS in the previous week. Section 2 of the CTRL opened on 14th November 2007, which resulted in the last two EPS Class 37/6s, Nos. 37601 and 37603, being taken off L&CR's books. They became part of the DRS fleet early the following year. 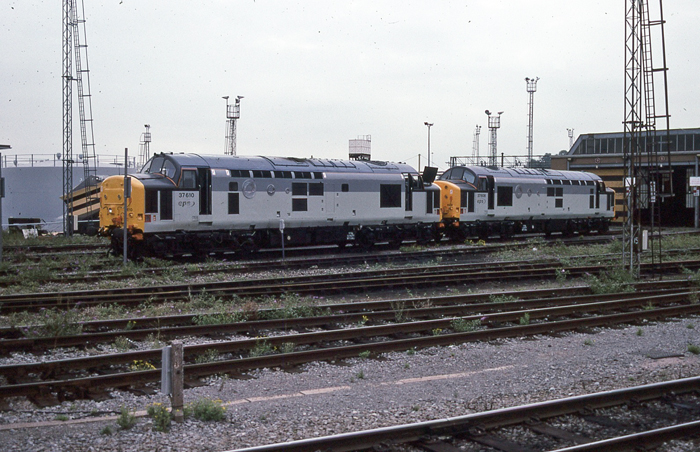 Nos. 37608 and 37610 are seen at Bristol Bath Road Depot, not long after being allocated to the former Western Region for hauling the Plymouth and Swansea portions of the "Nightstar" sleeper. In 1996, both were transferred to Old Oak Common. © David Glasspool Collection 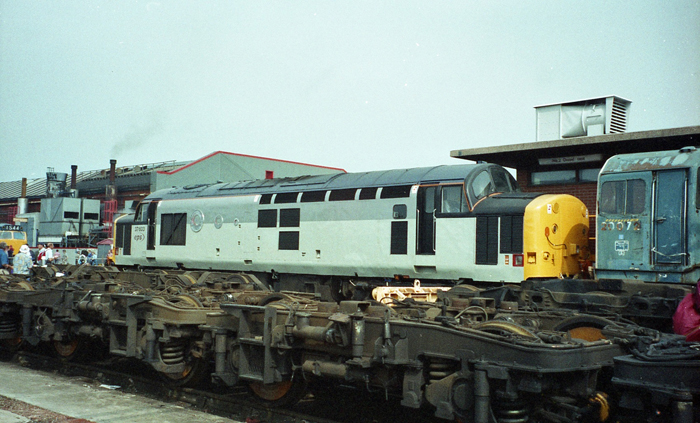 A sparkling No. 37603 is seen at Crewe Works Open Day, wearing the attractive flint/light grey two-tone "EPS" livery. Note the Channel Tunnel roundels, which were applied to Class 37, 73, and 92 locomotives under the "EPS" umbrella, in addition to those Class 92s belonging to "Railfreight Distribution" and SNCF. This locomotive remained in use as part of the "Eurostar" operation until November 2007. © David Glasspool Collection 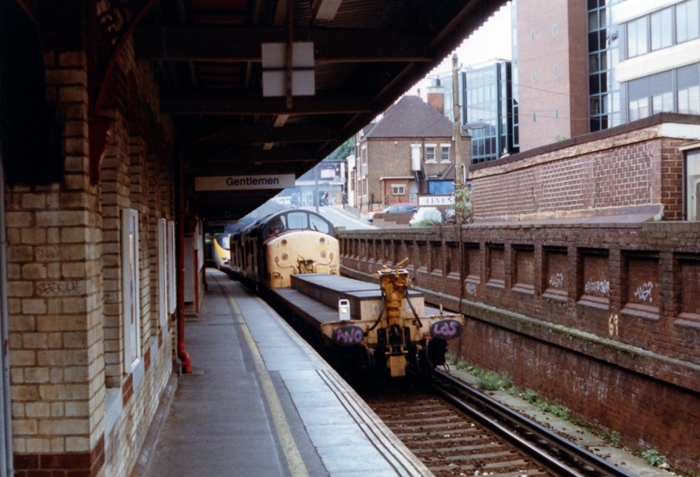 "Thunderbirds" in action: Class 373 set Nos. 3311 and 3312 are seen being towed alongside Bromley South's platform 4 behind Class 37 Nos. 37601 and 37606, en route from North Pole Depot to Cheriton (Folkestone). Separating the diesels and Class 373 sets is a barrier wagon, which allows the former to connect to the latter's unique coupling. One of these very wagons is seen being propelled at the front of the formation. © Roger Goodrum 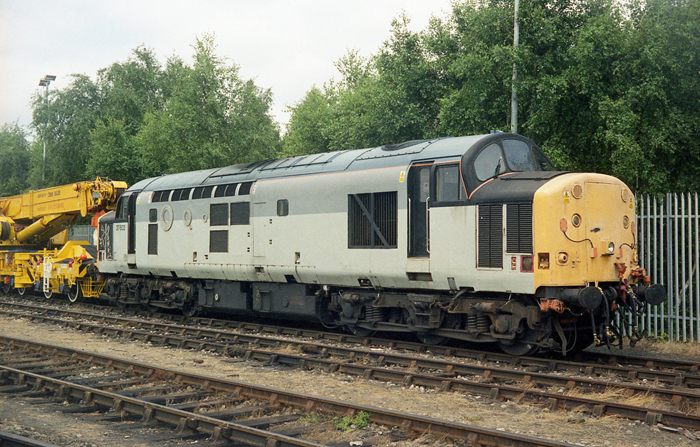 Not so happy times: a somewhat faded No. 37602 is seen at Old Oak Common Open Day, a year after the "Nightstar" project was cancelled. This locomotive was transferred to "Direct Rail Services" in 2002. © David Glasspool Collection