On 29th February 1996, it was formally announced by the then Secretary of State for Transport, Sir George Young, that ‘’London & Continental Railways’’ (L&CR) had been selected as the preferred consortium to build and operate the CTRL. As part of its bid package, L&CR had included plans for amalgamated international and domestic stations at both Ebbsfleet and Stratford. A station on the CTRL at Stratford was anticipated to bring much needed regeneration to the run-down areas of East London. Similarly, high-speed domestic services were also recognised as having the potential to revitalise depressed areas of Kent, particularly Thanet and the Medway Towns, where new employment opportunities were desperately needed. It would, however, be over seven years until noticeable planning for high-speed domestic trains commenced. By April 2003, the concept of such domestic services in Kent was in some doubt; the now defunct ‘’Strategic Rail Authority’’ had suggested that significant limits on government rail spending, in light of cost overruns on the main CTRL project, could prevent the commencement of these trains. However, by October of the same year, fairly solid proposals were devised. The SRA outlined running fast commuter services from St Pancras to Ashford, Canterbury (West), Folkestone, Ramsgate, and finally, the Medway Towns, all via the CTRL. Maidstone, the county town, had not been earmarked for any form of CTRL service, and physical limitations presented by Shakespeare Tunnel saw that Dover was similarly lacking (more of later).

In the meantime, Japanese firm ‘’Hitachi’’ had been further developing its ‘’A-Train’’ technology. The SRA’s announcement of a potential order of new stock for the envisaged high-speed commuter services had stimulated the company’s interest in entering the British railway market. ‘’A-Train’’ expands to ‘’Advanced-Train’’, and is a general brand name applied to a family of Hitachi EMUs. No less than six classes of EMU under the ‘’A-Train’’ heading had been produced by the company between the Octobers of 1999 and 2001 for the railways of Japan. These units had been built using a new generation of aluminium, which was lightweight and, at the end of the rolling stock’s economical life, could easily be recycled. A new form of welding, ‘’Friction Stir Welding’’ (FSW), allowed metal panels to be fused together with minimal detrimental effects on this material’s strength, heat distortion being kept to an all-time low during the process. A robust body was achieved by means of creating a double-skinned aluminium shell, which could reduce vibrations, limit the level of exterior sound, and provide highly effective heat insulation. Such construction requires far fewer individual components and sets high-quality crash worthiness standards.

Hitachi’s venture onto the former British Rail network began in 2004, with the deployment of its ‘’Verification Train’’. In January of that year, work had commenced on converting a redundant Class 310 EMU into a testing unit for Hitachi’s ‘’A-Train’’ technology. The four-vehicle Class 310 fleet had originally been built in 1966 for the London Midland Region, to operate local services out of the rebuilt Euston station. The unit was required to operate on both AC and DC electric networks, thus the solution devised was novel. The conversion task involved retaining both driving trailers and the original motor carriage (complete with pantograph). A fourth vehicle in the form of another motor carriage was to incorporate Hitachi’s testing equipment, in addition to a second pantograph for the AC lines (including the CTRL). To be compatible with the third rail DC network of Kent, a fifth vehicle was involved in the conversion task. A redundant motor car from a 4-VEP unit was modified for operation with the Class 310 formation, making it possible to pick up third rail current. Thus, for DC operation, the original AC motor car would be removed and replaced by the 4-VEP vehicle.

On 27th October 2004, the Government formally gave CTRL domestic services the ‘’go-ahead’’, and both Gravesend and Sittingbourne had been added to the list of locations which were likely to benefit from the scheme. Stratford International was also included within the plans, in light of the capital’s 2012 Olympic bid. On this same day, it was also announced that Hitachi had been selected as the preferred contractor to construct the new high-speed stock for the domestic scheme. The company continued to experiment with the Class 310 ‘’Verification Train’’ until the end of March 2005. On 1st June of that year, the SRA formally signed a contract with Hitachi Europe Ltd, worth some £250 million, for the construction and delivery of 28 six-vehicle dual-voltage units, incorporating the aforementioned ‘’A-Train’’ technology. Finance was provided by HSBC Rail Ltd.

After the signing of rolling stock contracts, as far as CTRL services were concerned, Dover was still out of the frame. The decidedly slim twin single-track bores of Shakespeare Tunnel, on the Folkestone to Dover stretch of Kent Coast line, presented safety obstacles. Only passenger trains which incorporated end gangway connections were permitted to run through them. Should a train breakdown in either of the bores, passengers would be unable to exit through the conventional side doors of carriages, since there would physically be no room between these and the tunnel walls. End gangway doors bypass this predicament, by permitting exit through the front or rear of a multiple unit (or just the latter in the case of locomotive-hauled formations). The streamlined design of the proposed domestic stock made end gangway corridor connections a non-starter; such features were not suitable for the high-speed running planned. However, on 29th July 2006, despite the obstacles, it was formally announced that CTRL services would in fact reach Dover, replacing the original end point of Folkestone. The fact that the new stock was to include recessed airtight sliding doors, as opposed to those externally-opening plug doors found on the Class 375 fleet, may have influenced this decision. Indeed, sliding doors had been used by Hitachi on the previous ‘’A-Train’’ builds. Now that Dover had been added to the passenger schedule, an additional unit was tagged on to the original rolling stock order, bringing the total number of units to 29 and adding about £9 million to the overall construction cost. As far as the twin bores of Shakespeare Tunnel were concerned, the tracks within them would be slewed to one side to provide enough room for evacuation.

The latest technology was to be housed within a shell based heavily on the existing Hitachi 885 Series ‘’Sonic’’ EMU, also part of the ‘’A-Train’’ family. This had a top speed of 81 MPH; new electronics, motors, and gearing, would give the British fleet a maximum speed of 140 MPH. Whilst the CTRL is, in sections, passed for 186 MPH running, the lower top speed of the Hitachi stock is to compensate for the stop-start service patterns of the commuter diagrams. Thus, the gearing ratio allows for a faster acceleration than a setup optimised for 186 MPH running. On 23rd June 2006, a full-size mock up of a driving trailer was unveiled at Ashford station, which revealed the proposed internal seating arrangements, the driver’s cab, and the planned black, white, and yellow external livery. A mixture of 2+2 ‘’airline’’, ‘’facing’’, and tip-up ‘’perch’’ seats would provide a standard class sitting capacity of 354. Standing capacity in addition to this has been estimated at 154. 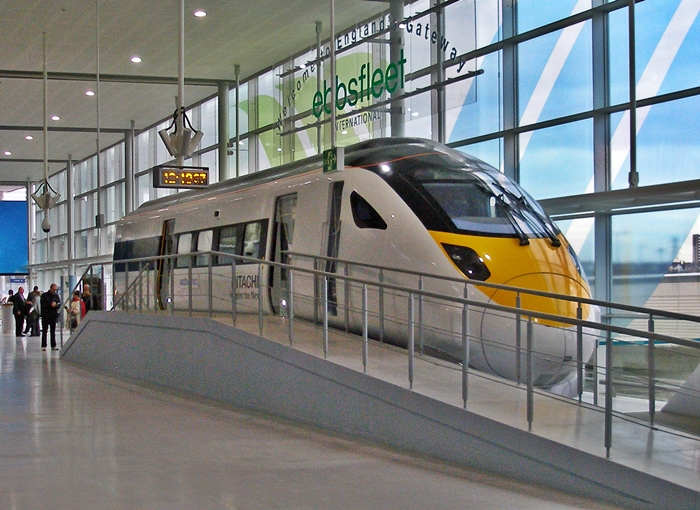 In the main circulating hall at Ebbsfleet International can now be found the original full-size mock-up of a ''Javelin'' driving trailer. This was formerly based at Ashford, having been unveiled in June 2006. Instantly recognisable is the black and white livery which was applied to pre-production drawings of the type. © David Glasspool 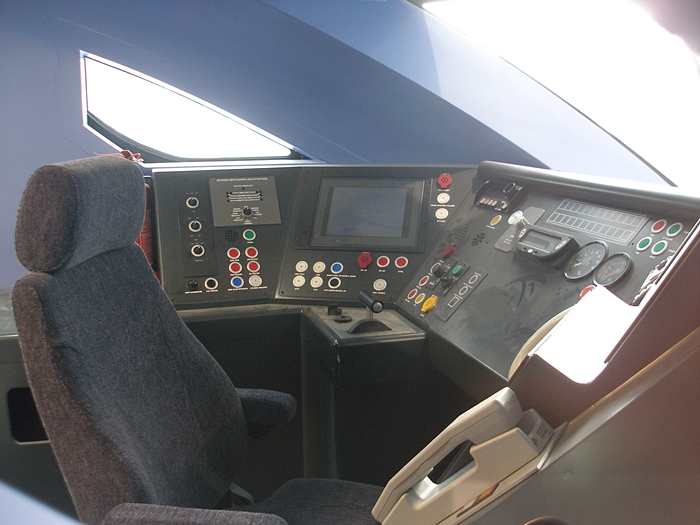 A view of the cab reveals the centrally-located driving position, as per the Class 373 formations. The unit is driver only operation, thus doors and lights are controlled from here. The three red buttons below the television screen configure the unit for three different networks: Network Rail AC; Network Rail DC; and CTRL. © David Glasspool 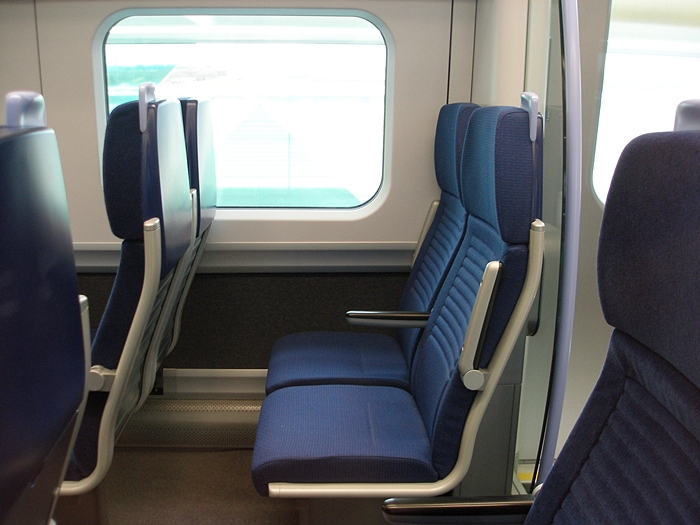 The units are equipped with 2+2 seating in ''airline'' and ''facing'' arrangements, in addition to tip-up seats. Chairs also have fold-down tables. The seats are German-built, as are the gangways between vehicles, and the couplings. © David Glasspool