This was once a typical rural outpost of the South Eastern Railway, which opened on 1st April 1882 with the Hoo Junction to Sharnal Street section of the branch to the Isle of Grain. Single-track throughout, the final 6½-miles to Port Victoria, where the SER commissioned a deep water pier, were opened to traffic on 11th September of the same year. The line had been conceived under the name of the "Hundred of Hoo Railway Company", which had been incorporated by an Act of Parliament dated 21st July 1879 and was subsequently absorbed by the SER.

The line to Grain was the SER's response to the rival LC&DR's agreement with the ‘’Zealand Shipping Company’’ to transfer the latter's steamer traffic from Ramsgate to a new pier at Queenborough. For this, the LC&DR opened a short spur to a "Queenborough Pier" station on 15th May 1876, this feeding off the company's earlier-commissioned Sheerness branch. This decision had financial implications for the SER: in 1865, the company and LC&DR both signed the "Continental Traffic Agreement", which meant that any receipts generated from port traffic between Margate and Hastings inclusive would be pooled into a common account. By switching steamer traffic from Ramsgate to Queenborough, the LC&DR could avoid sharing this income with the SER.

The station at Cliffe was situated 2-miles 43-chains from Hoo Junction, 29¾ miles from Charing Cross, and 1 mile south of the village it purported to serve. A single brick platform was built on the southern side of the track, upon which was erected a typical SER main building. The latter was a single-storey structure of tongue-and-groove timber construction, with a hipped slated roof, and attached to its northern elevation was an attractive canopy with arched roof and decorative valance. Unassuming this building may have been, seemingly no expense was spared when it came to providing accommodaton for the Station Master at this quiet, isolated spot. A substantial two-storey-high house was erected on the platform, just west of the station building, and similarly generous provision was also made for the Station Master at Sharnal Street.

Unlike at Sharnal Street station, 3¼-miles to the east, no passing loop was present in the layout at Cliffe, but goods traffic was seeminly well catered for by the presence of four sidings. An interesting freight load handled at this station was that of explosives, emanating from the gunpowder factory of "Curtis & Harvey's", which was situated on Cliffe Marshes, 2⅔-mile north of the station. The company built the chemical explosives factory in 1898, having taken over a gunpowder storage depot which had been on the marshes since 1892, and production lasted until 1920.

Of the goods sidings mentioned, two required a head shunt manoeuvre to access, which included a dock line that terminated behind the eastern end of the platform. These sidings are illustrated in the below diagrams, and the layout was controlled from a signal box situated on the opposite side of the running line to the main station building. The signal box was built to the SER's in-house design, being two-storeys high, of all timber construction, with sash-style windows and a hipped slated roof, and a virtually identical cabin came into use at nearby Sharnal Street.

The importance of the Grain branch for steamer traffic declined after the formation of the SE&CR Joint Managing Committee in 1899. Ferries which linked Port Victoria and Queenborough ceased two years later, and the deteriorating condition of the timber pier at the former saw the seaward end abandoned in 1916. Eventually, the line was cut back from the pier in 1931 and a replacement station, also carrying the "Port Victoria" name and comprising a single platform, was erected on terra firma.

In lieu of the receipts once generated by Port Victoria trains, the SE&CR attempted to generate more local traffic along the line. In summer 1906, a series of single-platform timber-built halts were opened at Grain Crossing, Middle Stoke, Beluncle, High Halstow, and Uralite. These were served by a "railmotor", which was essentially a steam locomotive and carriage which shared a common chassis, and seen by the SE&CR as an economical way of serving sparsely populated areas.

The Southern Railway embarked on a scheme to develop the "Hundred of Hoo" line as a genuine holiday route, by promoting a rather bleak outpost on the peninsula by the name of "Allhallows-on-Sea". The upshot of this was the commissioning of a new spur, just 1¾-miles in length, which left the original line to Grain at a newly-created "Stoke Junction", 1⅓-miles west of Grain Crossing. This spur opened to passenger traffic on 14th May 1932, most of the Port Victoria services being diverted there, and such was the SR's optimism that they doubled the branch between Allhallows-on-Sea and Stoke Junction in 1934. In conjunction with this, upgrades were made to the stations at Cliffe and Sharnal Street in the same year. Both sites gained a second platform, manufactured from precast concrete components from the SR's works at Exmouth Junction, Devon. Naturally, Cliffe's track layout was upgraded to include a passing loop at this time, in addition to another siding east of the station, and the existing platform of 1882 was re-faced with precast concrete, again of Exmouth Junction origin. At both Cliffe and Sharnal Street, timber waiting shelters with backward-sloping roofs were brought into use on the additional platforms. Interestingly, the SR did not introduce its trademark Swan Neck gas lamps at either of these stations during the 1934 upgrades, the older diamond-shaped lamp design being used on the platforms.

By the early 1950s, the main station building at Cliffe had lost its decorative canopy valance, but otherwise remained structurally complete. Allhallows-on-Sea never developed into the resort that SR had originally hope for, the crowds not being tempted away from the premier beaches of Margate, Broadstairs, and Ramsgate, to the mud of the Thames Estuary. This culminated in the singling of the Allhallows spur in 1957, but stations at Cliffe and Sharnal Street retained their second platforms erected in 1934. The push-pull service, comprising an SE&CR "H" Class 0-4-4 steam engine and coaching stock of the same company, had become known locally as the "Gravesend Flyer" and reportedly, on a good day with a tail wind, could reach 30 MPH.

In 1960, the British Transport Commission announced the withdrawal of passenger services between Gravesend Central and Allhallows-on-Sea and Grain. Annual passeger revenue along the route was about £12,900, but operating costs were around £25,000. In the Commons, Gravesend's MP had argued that poor patronage was because services along the line were not run at convenient times, often failing to connect with London services at Gravesend Central. Additionally, it was made known that even the oil refinery on Grain (construction of which had started in 1950) had complained to British Railways that the timing of the services along the line was incovenient both for workers and visitors to the site. A diesel service on the route was countered on the grounds that it would not make any significant cost savings, whether based on the existing steam timetable or one with more frequent services.

Railway passenger services over the Hoo Peninsula ran for the last time on Sunday 3rd December 1961, but public goods facilities were still officially available at Cliffe and Sharnal Street stations until 20th August of the following year. The structures remained intact at both sites until 1966, when an earnest effort was made to remove traces of the former stations. At Cliffe, the signal box and Station Master's house were given a temporary stay of execution, the former being retained to control the still extant passing loop. Everything else, even down to the platforms, disappeared. The signal box and Station Master's house were finally culled in the early 1970s, and the layout simplified to a single track. This left just the former approach road on the southern side of the track as evidence that a station was once here; however, in 1990, the top half of this disappeared under new housing plots.

Diagram showing the early, single-platform track plan. Click the above for a larger version. © David Glasspool

Track layout after the building of a second platform by the Southern Railway in 1934, and the conversion of the parallel-running siding into a loop. Click the above for a larger version. © David Glasspool 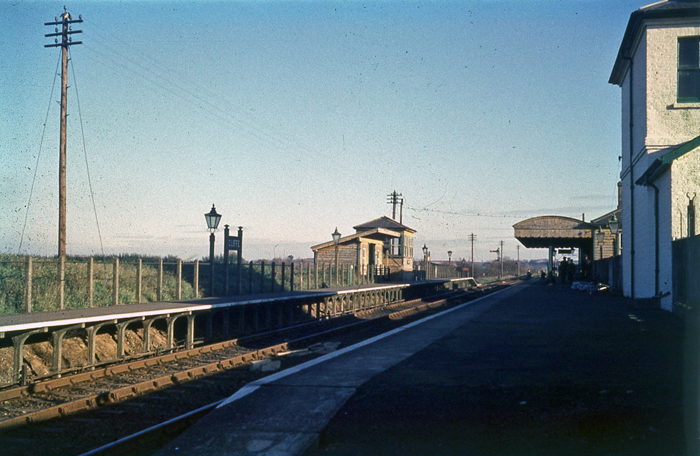 The end is nigh in this eastward view, which shows the station little over a week before closure to passenger services. On the right is the whitewashed Station Master's house, whilst just beyond is the main timber station building, shorn of its decorative canopy valance. The platform on the left, complete with timber waiting shelter, had been erected in 1934, when the siding there was formed into a loop. Behind the waiting shelter is the SER-designed signal box, whilst beyond the end of the platform is the "down" starter signal. A track foot crossing at the far end provided passage between the platforms. Today, neither a brick nor timber remains of this station © David Glasspool Collection 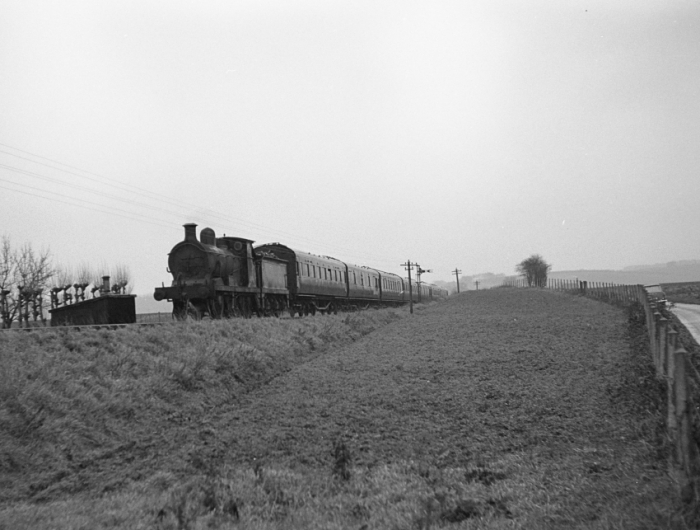 Just under ⅔-mile from the station, "C" Class No. 31689 is seen approaching the platforms from the east at 2:58 P.M. on the last day of passenger services. Evidently, it was forecasted to be a popular day for travel to mark the end of passenger trains, given that the locomotive has seven carriages in tow. © David Glasspool Collection 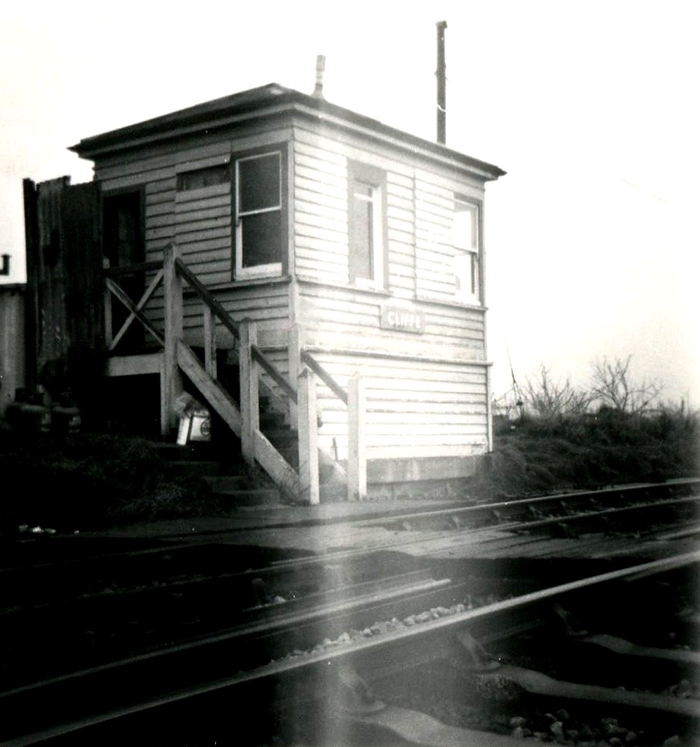 The signal box remained in existence for over a decade beyond the closure of the station to passengers. By the time of this photograph, three of the sash-style windows had been covered over by clapboard panels. © Roger Goodrum