Before continuing, it is worth examining one of the out-of-the-ordinary boat trains that served Dover Marine. Initially, the French inaugurated the ‘’Flèche d’Or’’ on 11th September 1926, a prestigious boat train running between Calais and Paris. The ‘’Compagnie Internationale des Wagons-Lits’’ (International Sleeping Car Company) ordered twenty British Pullman vehicles to operate the service: fifteen kitchen cars (Nos. 4001 to 4015) were built by the Birmingham Railway Carriage & Wagon Company, and fifteen parlour cars (Nos. 4016 to 4030) were constructed by the Metropolitan Carriage, Wagon & Finance Company. The luxury vehicles were delivered new in the now renowned Umber and Crème ‘’New Standard’’ Pullman colours of the British fleet, and were operated as pairs, rather than individual carriages. With reference to the latter, this meant that a kitchen car and a parlour car would be semi-permanently coupled into a pair known as a ‘’Couplage’’, or, if you like, ‘’Linkage’’. Initially, the Flèche d’Or service was operated by two trains, each ten vehicles in length. From 1932 onwards, Pullman vehicles were repainted into the standard colours worn by the rest of the Wagon-Lits fleet: a lighter shade of crème appeared in place of the British colour, and the umber lower half became dark blue.

The French’s efforts were matched on the other side of the Channel by an all-Pullman service run by the Southern Railway from Victoria. Colloquially, this was referred to as the ‘’White Pullman’’, because the other Pullman cars on the Eastern Section at that time still wore the crimson lake livery of the SE&CR. Officially, however, the service was called the ‘’Continental Express’’, but it was nevertheless referred to by passengers as the ‘’Golden Arrow’’, the English translation of the French title. This was a sign of things to come, for on 15th May 1929, the SR’s all-Pullman boat train service was re-launched as the ‘’Golden Arrow’’. Significant engineering works occurred on the ex-SER trunk line between Petts Wood Junction and Dover, which involved strengthening bridges to accommodate the heavier engines planned to haul this prestigious service. Maunsell ‘’Lord Nelson’’ 4-6-0 locomotives were selected as the prime motive power, with Urie 4-6-0 ‘’King Arthur’’ engines (later modified by Maunsell) supplementing the fleet.

Much of the time, the outward ‘’Golden Arrow’’ from Victoria was booked to arrive at Folkestone Harbour, but the return portion instead started at Dover Marine, which gave rise to some interesting shunting movements. As mentioned elsewhere on the website, the Folkestone Harbour branch has never had a direct connection with the main line, and access to it can only be made by means of a headshunt manoeuvre. This arrangement was implemented as a safety measure from the outset, since the branch descends at a steep gradient of 1 in 30 to the harbour. Thus, the Pullman service would arrive at Folkestone Junction, and initially terminate in the reception sidings positioned to the east of the station there, where the connection with the Harbour Branch was made. An ex-SE&CR R1 Class 0-6-0 Tank would then attach itself to the rear of the train, whilst the ‘’main line’’ engine was detached, and take the Golden Arrow stock down to Folkestone Harbour. This released the ‘’main line’’ locomotive from the headshunt, and consequently, it ran light along Folkestone Warren, to Dover Marine. At the latter, the engine would be rotated, more often than not by means of the triangular junction between the converging lines from Folkestone, Priory, and Marine stations, rather than on the turntable at Dover shed. After rotation, the locomotive would then head back to Folkestone Junction to collect the empty Pullman stock for the return working, which had previously been banked up the steep Harbour Branch incline by as many as four R1 Tanks. The tank engines would usually bring the train out onto the running lines at the Junction station, allowing the express locomotive to immediately couple to the stock. The Pullman vehicles would then be hauled empty to Dover Marine to form the return working to Victoria. This involved some indignity for the engine because for this empty stock movement, it had to run tender-first.

The declaration of war on Germany on 3rd September 1939 signalled the beginning of harsh times for the Port of Dover, as it became a prime target for bombing raids. Boat trains and steamer services were suspended immediately, and passenger services to the Marine station ceased. The Marine site was again dedicated to military traffic, just as it had been during World War I, and as a consequence, services along the ex-SER route went no further than Folkestone. Indeed, consistent shelling over the Channel, from France, had made the site unsafe to handle any form of passenger traffic, and even the 1928-opened engine shed had to close during the conflict, all engines being stationed at Ashford for the duration. The attractive Marine station suffered damage to the trainshed roof, but thankfully, this was modest enough to deem it practical and worthwhile to repair, normal service at the station resuming after the conflict. Since the advent of World War II, the prominent Lord Warden Hotel had been used as offices; the Marine Department occupied the building from 1952 onwards, by which time it was known as ‘’Southern House’’.

Initially, the British Railways era did not necessarily mean rationalisation for this extensive site, as it did at so many other stations nationwide. Rather, the emphasis was on modernising facilities, to cater for new rail freight boat traffic which, in these pre-Chunnel days, was still important and by no means in decline. Modernisation of the site began in 1953, with the renewal of the five quayside cranes which ran alongside the northern wall of the terminus. This was followed in February 1956 by the approval of the Kent Coast Electrification Scheme. Published within an ‘’Extension of Electrification’’ report of 1957 were the alterations proposed for the Marine station. In early 1959, the station was closed to passengers temporarily to allow modifications to be carried out. These involved the extension of both island platforms westward by 114-feet, beyond the extent of the trainshed, and the installation of canopies above the exposed surfaces. The platform extensions were constituted of prefabricated concrete components, manufactured at Exmouth Junction concrete works; the platform canopies were W-shaped and lacked any form of valance. The latter were virtually enlarged versions of the equally clinical canopies which emerged at the rebuilt Folkestone Central and St Mary Cray stations, and these additions somewhat marred the attractive stone façade of the SE&CR station. Third rail was installed on all platform lines during 1959, as part of the ‘’Chatham’’ line electrification of the scheme’s ‘’Phase 1’’, and these were subsequently energised for the commencement of the full electric timetable via this route on 15th June of that year. An enclosed riveted steel footbridge was also erected across the approach tracks from Dover Priory, linking the main entrance beside the Lord Warden Hotel with the Customs Hall, on the northern perimeter of the Western Docks. Naturally, steam continued to visit the station by means of the ex-SER trunk line from the Folkestone direction until the implementation of a full electric timetable on this route on 18th June 1962. The Golden Arrow had been hauled by E5000 series electric locomotives since 12th June 1961. Colour lights installed at the Marine station during the electrification scheme were of the three-aspect type. Before electrification, the empty stock of arrived services would be shunted out the seaward end of the trainshed, and up along the extent of the old Admiralty Pier, to clear the platform lines. Locomotives would also be required to run-a-round using the Admiralty Pier tracks.

The commencement of electric haulage on the Golden Arrow in the June of 1961 coincided with the demise of Dover engine shed. Hitherto, the depot had the responsibility of servicing the Stewarts Lane-allocated steam locomotives which brought the luxurious train down from Victoria. Closure of the sub-shed at nearby Folkestone Junction also occurred, but the site of Dover MPD was put to new railway use, becoming host to a plethora of goods sidings. Closure of goods sidings at Bulwark Street occurred on 15th August 1966, but Archcliffe Junction – at the Folkestone end of the Hawkesbury Street Curve – remained in existence. In the following decade, major works were planned around the Marine station’s peripheral: in 1973, proposals were put forward for the construction of a roll-on-roll-off vehicle shed, and in 1974, planning of a new hoverport at the Western Docks began. After a consultation period spanning 1975 to 1976 inclusive, the hoverport was formally commissioned for operation on 5th July 1978, and replaced a smaller affair situated in the Eastern Docks. Track rationalisation had also occurred beyond the rear of the trainshed, and the ‘’Golden Arrow’’ had ceased between Victoria and the Channel Ports after a final run on 30th September 1972. Since 1969, the number of Pullman cars in the train had been whittled down to five, and the rest of the formation consisted of Second Class BR Mk 1 vehicles. 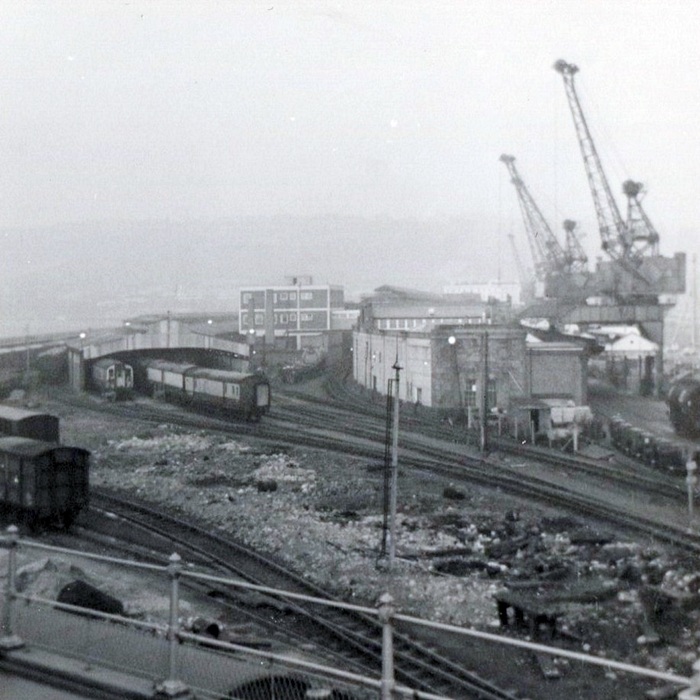 This north western view was taken from the southern extremity of the man-made spit of land upon which the Dover Marine railway complex was built. In evidence is the 820-foot-long four-track carriage shed, which can be seen accommodating a 4 CEP unit and Royal Mail coaches. The cranes on the right are standing along the edge of the ferry berth. The rear of Dover Marine station was behind the three-storey-high square block. © Roger Goodrum 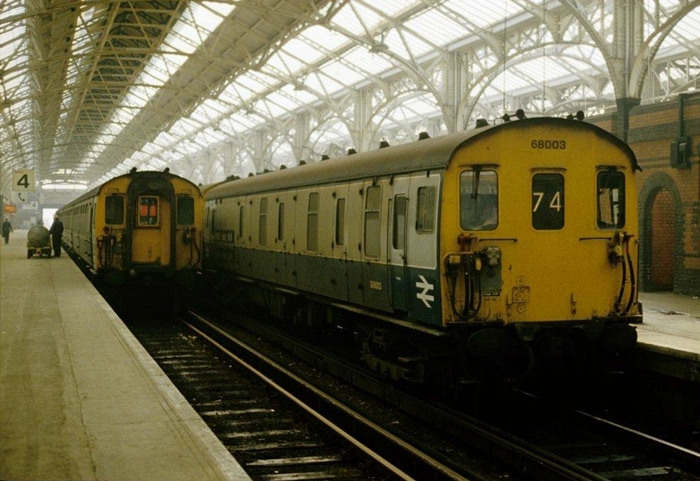 How it used to be. Motor Luggage Van No. 68003 has just arrived at the head of a 4 CEP formation, with a boat train from London Victoria. The head code indicates it has come via Herne Hill and Chatham, rather than via Tonbridge and Ashford. Also underneath the cavernous trainshed is 4 CEP No. 7176. © Wayne Walsh 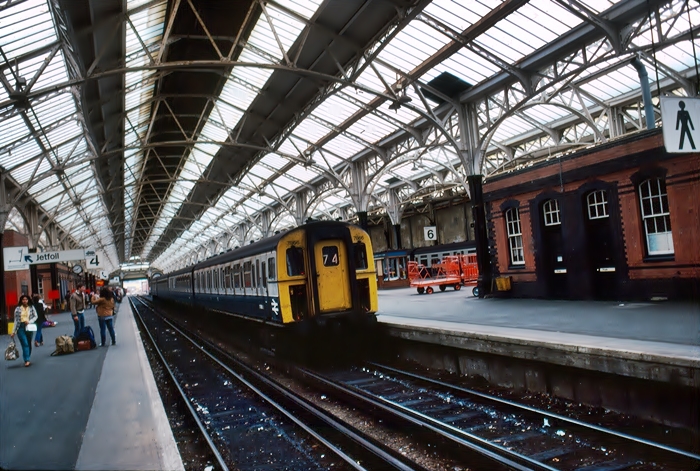 4 VEP No. 7866 is seen forming a service to Victoria, via Chatham and Herne Hill. At this time, the tracks still passed through the rear of the building. © David Glasspool Collection 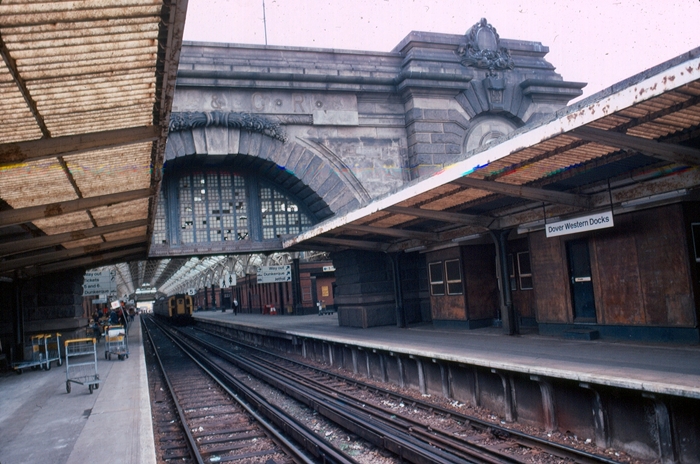 4 VEP No. 7866 is again evident in this view, which shows the main station façade. The concrete platform extensions, canopies, and offices date from 1959. © David Glasspool Collection