Carriage storage accommodation here was generous, especially in light of the limited amount space on offer. Five sidings were sandwiched in-between the engine shed and station; the four closest to the shed were covered for 300 foot of their length by a symmetrical pitched-roof building. This in itself was of peculiar construction: the walls were constituted of brick, but the façade was of timber fabrication and even boasted an ornate valance, similar in pattern to that of the passenger trainshed. The goods yard was quite a contrast in size to the carriage accommodation on offer: initially, only two sidings, parallel with and to the east of the running lines, were provided. One of these terminated within a pitched-roof goods shed, whilst the second terminated behind the northern end of the "down" platform. Three diminutive wagon turntables were incorporated within this complex, and one of these led to an additional, very short siding behind the goods shed, perpendicular to all other tracks. On the formation of the SE&CR there were, however, improvements. In conjunction with the engine shed receiving a larger 50 foot turntable, the goods yard more than doubled in size and the goods shed became a through affair, the extended line this time terminating at a wagon turntable, this again leading to an additional perpendicular freight siding.

There has been significant change at this station, the most major of alterations being under Southern Railway ownership. In 1924 the SR finalised plans for a then new six-road engine shed on reclaimed land near Dover Marine station. It formed part of the company's general modernisation of the Dover area and was priced at £190,000 (approximately £7,220,000 by today's prices). The depot's opening in 1928 coincided with the closure of the existing shed at Dover Priory and marked the first stage of this station layout's complete reconstruction. The shed was demolished in the year of its closure, along with the carriage shed, and the area became host to five spaced-out freight sidings, the most western of which passed through a then new goods shed. This building ultimately replaced the earlier structure on the "down" side, the site of which was used to provide lengthier platforms. Cattle pens and a trio of sidings did, however, remain on this side of the running lines. The most noticeable change instantly recognisable by a passenger would have been to the actual platforms and their associated structures. The main station building on the "down" side was demolished shortly after the removal of the trainshed in 1932 – unlike the large vaulting roofs of the London termini, trainsheds of smaller intermediate stations usually suffered from bouts of lingering smoke. This problem would have been exacerbated at Priory station as a result of the façades on either side of the trainshed, despite the provision of ventilation on the apex of the roof.

The rebuilt station was a total transformation, its only resemblance with the old layout being the site it was situated on and the retention of the railings which separated the platform lines from the goods sidings. The canopies here were of the same fundamental design which had appeared at Herne Bay and Dumpton Park during 1926: riveted steel. The footbridge was glazed and enclosed, complete with platform lifts; its design had again been seen previously at Dumpton Park. The platforms had been rebuilt in the familiar SR concrete, prefabricated at the company's own factory at Exmouth Junction, and the replacement station building here was evidently built for function, not looks, unlike its counterparts in Thanet. Three platform faces were now available with the conversion of the "up" side to an island. Finally, a signal box – built by the company but reflecting the design traits of Saxby & Farmer – was commissioned at the London end of the "down" platform, coming into use on 16th November 1930.

The station had received considerable damage a number of times during air raids of World War II and the destruction sustained was later "patched up" by British Railways during the 1950s. Direct electric services to and from London began on 15th June 1959, but little changed at the station as a result of this. The London end of the "down" platform saw a concrete extension added, taking its length to beyond the signal box, but it was not possible to treat other platform ends likewise. On 3rd July 1961, goods facilities were officially withdrawn, but all lines were left in situ for rolling stock storage. Those sidings on the "down" side also remained in this capacity until they were decommissioned in April 1969, which subsequently allowed for the lengthening, once again, of the "down" platform's London end. The first colour aspect light had come into operation on 10th October 1965, at the southern end of the "down" platform, but the rest of the signalling remained mechanical until April 1980, complete colour light operation coming into force on 27th of that month. The signal box remained functional, however, until that, too, was superseded in 1998 by the panel at Folkestone East. 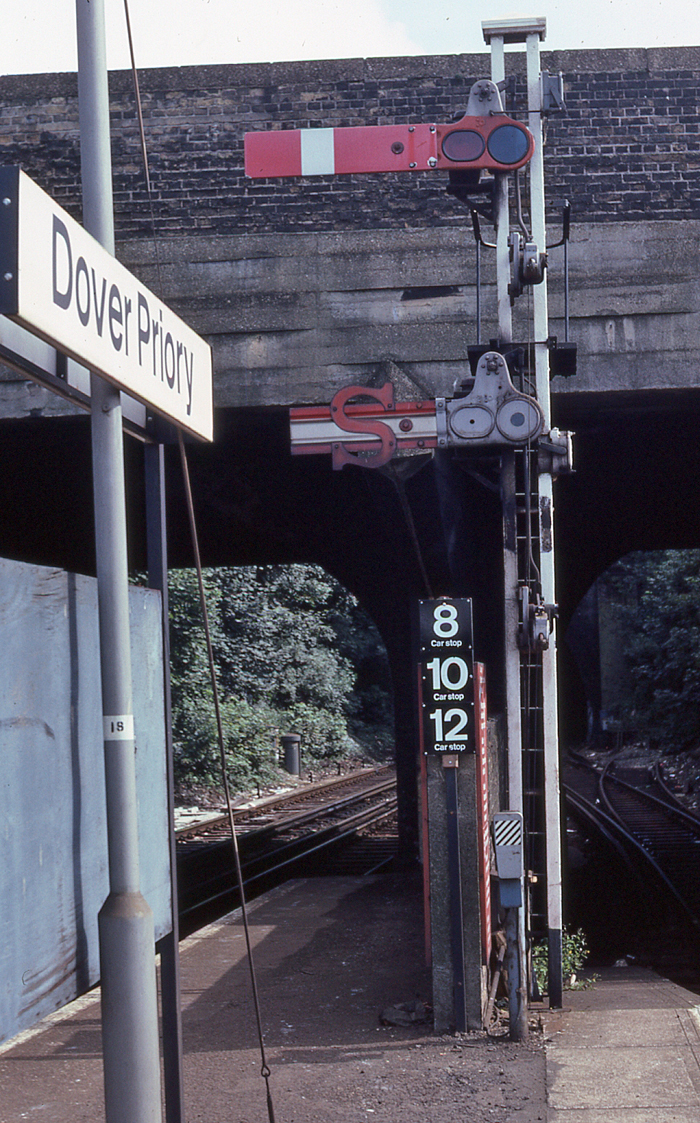 At the southern end of platform Nos. 2 and 3, facing Harbour Tunnel, once existed this double-armed semaphore post. The upper arm is a regular "stop" signal, whist that below is a "shunt" signal. If the "stop" signal showed "danger", but the lower arm read "go", trains could proceed only as far as was necessary to complete a shunting manoeuvre. © David Glasspool Collection 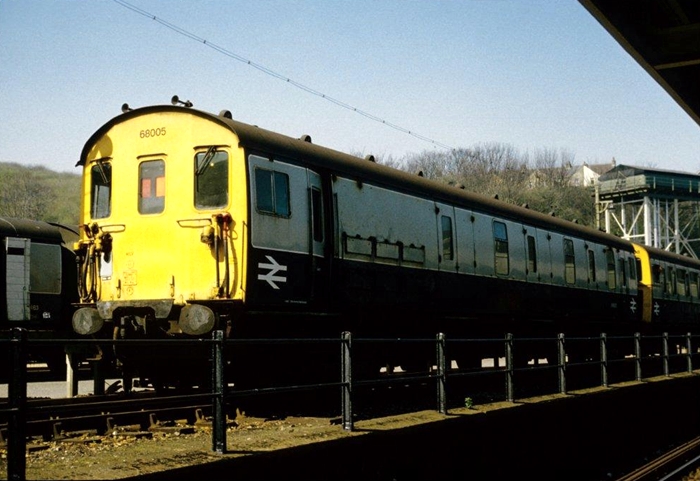 Motor Luggage Van No. 68005 is seen stabled in the EMU berthing sidings, situated in an elevated position west of the platforms. At this time, the water tower was still in evidence. No. 68005 can now be found at the Coventry Railway Centre. © Wayne Walsh 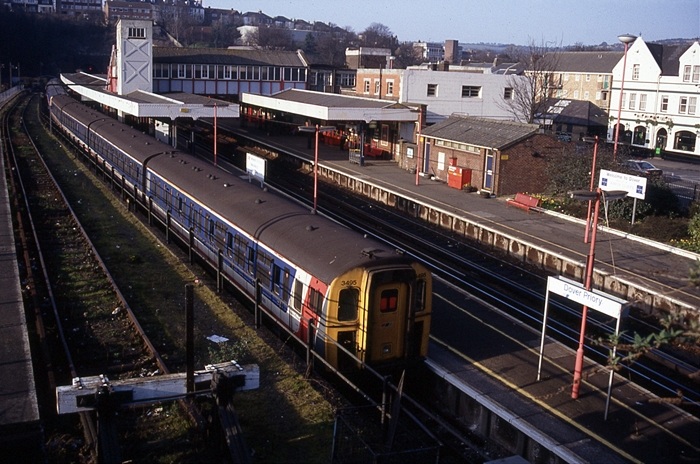 A 1993 overview shows 4 VEP No. 3495 sandwiched in-between platform 3 and the elevated rolling stock sidings. The canopies are of riveted steel construction, as per those erected by the SR at Herne Bay and Dumpton Park, and extend for 365-feet. © David Glasspool Collection