The first Shuttle locomotive was completed in December 1992, and on 14th of that month, arrived at the huge 100,000 square foot maintenance depot at Coquelles, Calais. This depot was destined to become the main heavy maintenance and repair shed for the whole of the Shuttle fleet, dealing with both locomotives and rolling stock around the clock. A pair of the Shuttle electrics were dispatched to Velim, Czech Republic in 1993, to be run on the 8¼-mile long oval test circuit of the ‘’Traffic Research Institute’’ of Prague. The circuit, electrified with overhead wires, allows high-speed endurance tests of up to 125 MPH. In 1994, two Brush-built Class 92s were also delivered to the circuit for testing. The Tri-Bos were equipped with TVM430 (TVM: Transmission Voie Machine) signalling equipment; this system had been used to signal the tunnel, and was an upgraded version of the earlier TVM300 signalling used on the Paris to Lyon TGV line in 1981. TVM430 was also installed on the May 1992-opened TGV-Nord high speed line, which links Paris with the tunnel portal and the Belgian border. Whilst existing TVM300-equipped trains are not compatible with TVM430, those with TVM430 can run on TVM300-signalled lines.

On 6th May 1994, the Channel Tunnel was formally opened by Queen Elizabeth II and French President Fraçois Mitterand, and the pair were conveyed through the tunnel by a freight shuttle formation. Thereafter, services were commissioned piecemeal: first, the HGV shuttles commenced, on 25th July, which comprised twenty-eight lattice-framed carrier wagons towering 18.4 feet into the air, in addition to a pair of unloading wagons and an air-conditioned passenger carriage, all sandwich in-between two Tri-Bo locomotives. Shuttle services for cars were inaugurated on 22nd December, whilst coaches could not use the tunnel until 26th June of the following year. Finally, on 29th September 1995, shuttle trains began accommodating camper vans and caravans.

As early as 18th November 1996, disaster struck – a fire in the South, Cheriton-bound tunnel, which started upon a lorry, saw one Shuttle locomotive, No. 9030, extensively damaged. The electronics were totally burnt out, and the locomotive was seen as beyond economical repair, whilst its partner at the other end of the stricken formation, No. 9006, could eventually be returned to service. Eurotunnel’s electric fleet was now one down, but further new-builds were on the cards: in 1997, an order was placed with Brush Traction for the construction of five more Shuttle locomotives. This order was extended in the following year, during the first deliveries, to include a further nine locomotives, bringing Eurotunnel’s fleet total to fifty-one. Finally, in the year 2000, an additional batch of seven Tri-Bo locomotives were ordered, but compared to all earlier builds, these were decidedly more powerful. Their traction output rated at 9,387 HP (7 Megawatts), compared with the 7,724 HP (5.76 MW) of the first locomotives. In 1994, the heaviest Freight Shuttles weighed approximately 2,400 tonnes, but longer formations were later introduced, these being 600 tonnes heavier - thus, trains were to be equivalent in weight to nearly seventeen Boeing 747-400 aircraft. The final examples of this powerful batch were delivered by Summer 2003. The end of deliveries heralded the beginning of an upgrade programme for the existing thirty-seven 7,724 HP locomotives constructed by Brush in the early 1990s. All builds, 5.76 MW and 7 MW, are designed to run at a top operating speed of 87 MPH, and onboard computers ensure that power application is limited during speeds of up to 40 MPH, to prevent wheel slip. All later builds are dedicated to the Freight Shuttles only. It appears that, eventually, Eurotunnel will have an entire fleet of 9,387 HP locomotives. 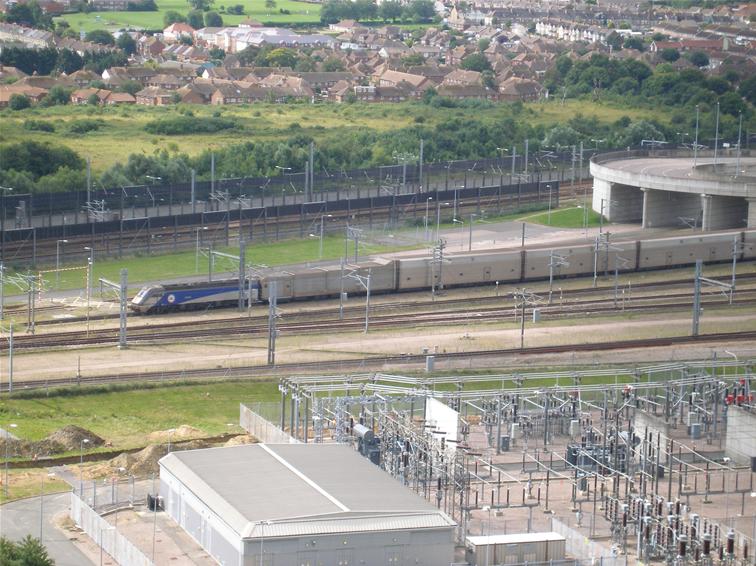 Refurbished No. 9809 is observed departing Cheriton with a Passenger Shuttle. To ensure that drivers are not hypnotised, Shuttle locomotives have been designed with cab windows which limit how much can be seen immediately in front of the driving position. Thus, the first 65 feet of track in front of the locomotive cannot be seen by the driver, thus helping to prevent hypnosis by a quick succession of sleepers passing by. Furthermore, thick cab struts either side of the main two windows also ensure that the driver cannot be hypnotised by identical tunnel segments flashing by. © David Glasspool 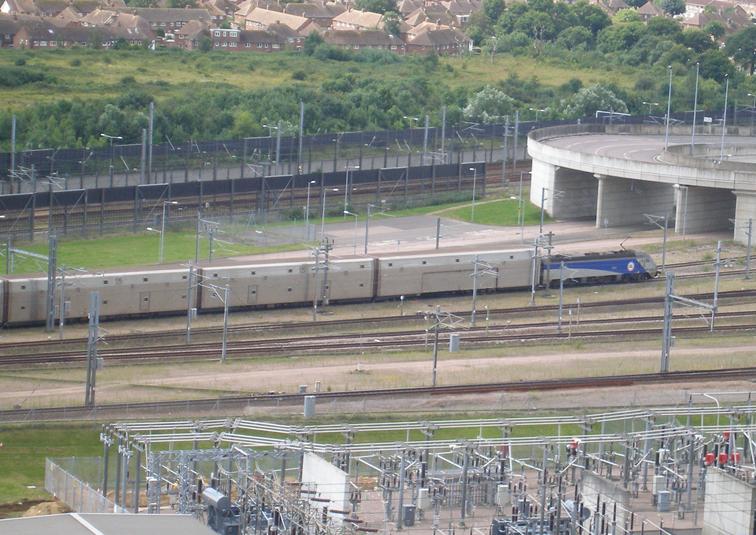 A view of the rear of the formation in the previous picture affords a view of the double-deck stock, which is always to be found at the rear of the train. No. 9028 ''Dame Kiri Te Kanawa'' is seen trailing, complete with the front pantograph raised. Two pantographs feature on each Shuttle locomotive, demonstrating one example of component duplication onboard, ensuring that electronic failures do not leave a train stranded within the tunnel. Each pantograph is fitted with ''wings''; when travelling through the tunnel, the wind resistance causes the pantograph to ''fly'', thus keeps it firmly in contact with the overhead wires. © David Glasspool