This has for long been an interesting and important interchange station between two alternate routes to London and Plymouth, where the novelty of trains leaving for the capital in opposite directions could be witnessed. It was the Great Western Railway which set the ball rolling for a main line to the south west. The company was incorporated on 31st August 1835 to build a line between London and Bristol, 117-miles and 4-furlongs in length, with an authorised capital of £2,500,000 (£215,000,000 at 2008 prices). The capital was divided as follows:

Contracts for the works were put out to tender as early as 26th November of the same year. Isambard Kingdom Brunel was appointed Chief Engineer of the line, and he assured GWR shareholders that his own Broad Gauge of 7-foot 0¼-inches was the best gauge to use. Latterly giving evidence before the Gauge Commissioners on 25th October 1845, Brunel was asked ‘’At what period did it occur to you to change the gauge from 4-feet 8½-inches to 7-feet?’’ The engineer responded; ‘’I think, in my own mind, it occurred to me in the course of my surveys in 1833 and 1834.’’ Brunel put forward serious proposals for Broad Gauge to GWR Directors immediately after the Act was passed, in August 1835, and initially received little encouragement. Company Directors did not doubt the engineer’s ability to deliver on his novel concept; rather, they were concerned that the deviation in gauge would entail a negative public reaction, for the GWR would be declaring themselves as the leaders of the revolutionary railway movement. Brunel cited the advantages of greater speed, stability, and capacity of his gauge, but it was not this line of reasoning which swayed the GWR Board. Brunel confirmed that as a result of the Broad Gauge, the GWR ‘’could have no connexion with any other of the main lines of railway’’ – thus, the company would have a complete monopoly of the West Country. Aware of this significance, Brunel received shareholders’ endorsement, and in November 1836 it was announced that construction works were already active on every section of the route between London and Bristol.

Brunel was appointed Consulting Engineer of the B&ER. Naturally, the line was to be built to his 7-foot 0¼-inch Broad Gauge, making a connection with the GWR at the throat of Temple Meads station. Whilst Brunel laid out the course of the line, much of the work was supervised by his Chief Assistant, William Gravatt. The latter was a competent mathematician: he was the son of an Assistant Inspector of the Royal Military Academy, Woolwich Arsenal, being born in Gravesend, Kent on 14th July 1806. Reportedly one of Brunel’s most trusted men, Gravatt had worked with the former and his father, Marc Brunel, on boring the Thames Tunnel between Rotherhithe and Wapping (due to financial shortages and a series of floods, this had yet to open).

The first section of line to be dealt with was that between Bristol and Bridgwater, Somerset, a distance of thirty-three miles. Progress was initially held up by complications over land purchase, in some cases due to unreasonable demands made by existing landowners. The latter were dealt with by subsequent legal action, and at the Half-yearly General Meeting of the B&ER on 14th August 1838, it was reported that the works were ‘’going forward with spirit and energy.’’ This section of route was built by private contractors, reportedly at a cost of under £7,600 per mile (about £553,000 at 2008 prices), which included the amount spent on a bridge spanning the River Parrett, ¾-mile beyond Bridgwater station. For the bridge, which was of 100-foot span, cofferdams were driven into the river, after which the contractor started building the abutments. Other major works included cutting through Puriton Hill, on Bridgwater’s northern peripheral, where in 1839 it was reported that upwards of 500 men were working.

It was not long before Gravatt was under fire from his superior. Progress on the line was not as advanced as Brunel had hoped, and in April 1841 the Chief Engineer revealed that he was intending to remove all but one of his staff from their positions. The assistant who remained safe was one William Froude. He had become part of Brunel’s engineering staff in 1837, working under Gravatt, and was the son of R. H. Froude, the Archdeacon of Totnes. The latter was a large shareholder of the B&ER, which may explain, at least in part, Brunel’s willingness to retain Froude as a junior engineer. On 6th June 1841, Brunel complained to Gravatt in writing about the latter’s failure to regularly inform his superior of progress on the B&ER. Then, on 18th of the same month, Brunel wrote to Gravatt stating that he had lost confidence in him, effectively forcing his resignation. He was subsequently replaced by John Joseph Macdonnell. The Bristol to Bridgwater section of the B&ER was opened to traffic on 14th June 1841. Shortly afterwards, on 30th of the same month, through running on the GWR between London and Bristol began.

The second section of the B&ER to be completed was that between Bridgwater and Taunton, opening to traffic on 1st July 1842. 11½-miles long, the extension followed the valley of the River Tone for over 8-miles of its extent, on a gradual upward gradient to bring it into the station at Taunton. The latter resided 45-miles from Bristol, 161½-miles from London, and when the line was finally complete, would be 29½-miles from Exeter. The third section of the route, the 9¼-mile stretch between Taunton and Beambridge, did not come into use until 1st May 1843. Beambridge resided two miles south west of Wellington, and existed as a temporary railhead for exactly a year, when the entire line was completed. The latter was achieved on the commissioning of the Beambridge to Exeter section for traffic on 1st May 1844. This part of the route extended for 21¾-miles, and the major earthworks centred on boring a 1092-yard-long tunnel, three miles south west of Wellington. Referred to as ‘’Whiteball’’, this tunnel was on the summit of the line, and reportedly cost £56/yard (about £4,300 at 2008 prices) to form. Thereafter, the line descended at a rate of 1 in 229 for the next five miles, beyond which the final leg to Exeter fell on a gradient of 1 in 459.

From Bristol to Exeter 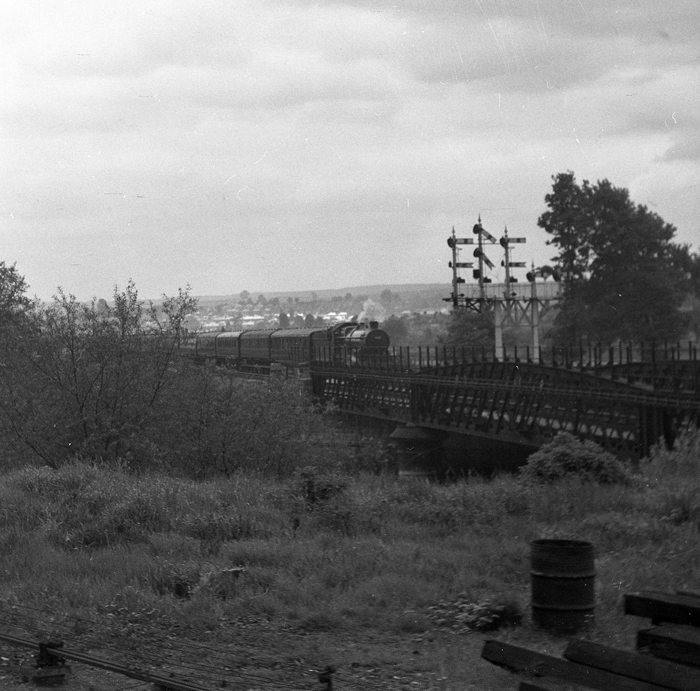 It's morning and a Castle Class, fronting Grouping-era carriages, is seen waiting to enter the station from the south. The lattice bridge in the foreground carried the railway over the River Exe. The photograph is likely to have been taken from a train upon the connecting curve between Central and St David's stations. © David Glasspool Collection 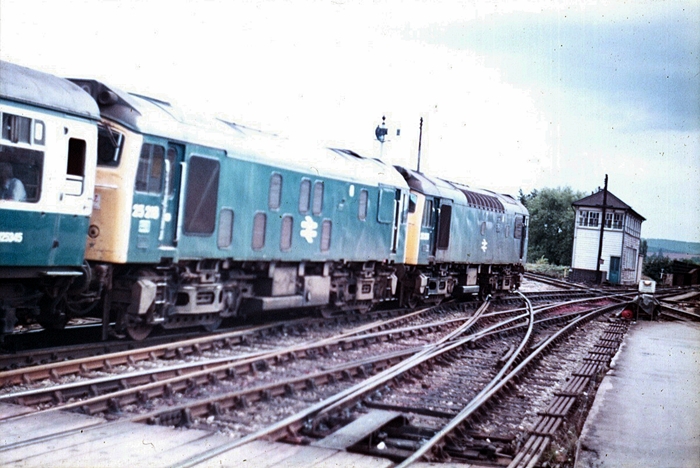 Exeter West Box is in evidence in this 1975 view, which shows double-heading Class 25s departing platform 1. The nearest locomotive is No. 25218. The photograph was taken from the central island platform, which at that time was used by Waterloo services. © David Glasspool Collection 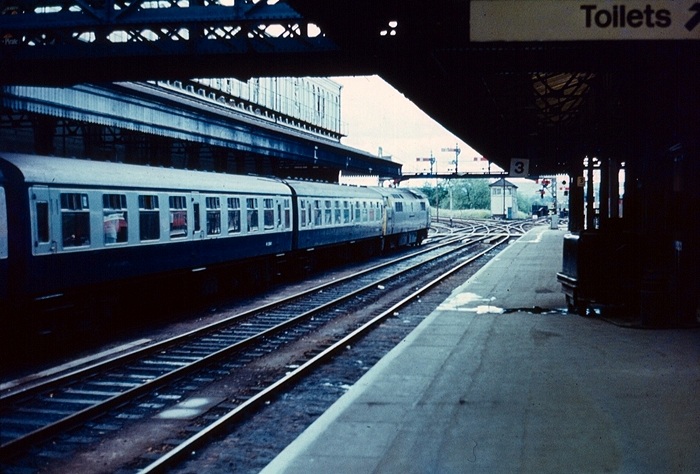 This southward view once again shows Exeter West Box, but also the complicated junction with the ex-SR line from Exeter Central. The splendid semaphore signal gantry and centre road disappeared during re-signalling works in 1985. Above the platform canopy over platform 1 can be seen the line of arched windows which, later, were replaced by corrugated plastic sheeting. At the head of the train is a Class 52 diesel-hydraulic. © David Glasspool Collection 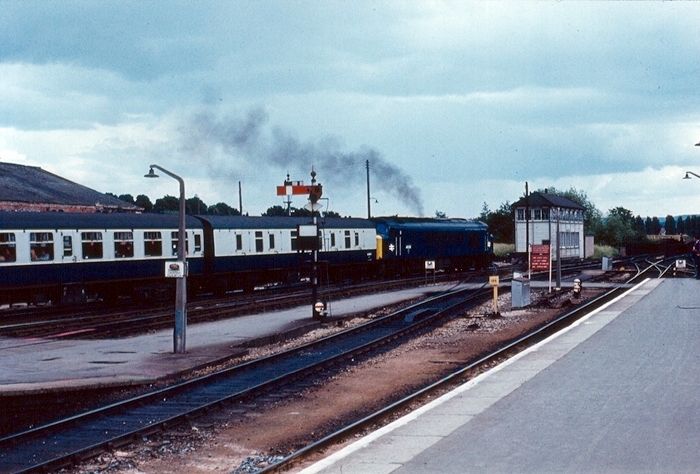 This view of a departing train headed by a Class 45 ''Peak'' shows part of the former SDR's Broad Gauge carriage shed. This can be seen rising behind the second BR Mk 1 coach, and survived until June 1977. © David Glasspool Collection