Today, this is a barren station, devoid of any form of finesse or style; it is the resultant of a rebuild and subsequent degrading. However, once upon a time this was a layout demonstrating the quintessential character of the SER, from the canopies to the signal box. The SER began running to Ashford on 1st December 1842, but it was not until 28th June of the following year that Folkestone was reached. Here, the line terminated at a temporary station whilst the feat of building the nineteen-arch Foord Viaduct was undertaken. With arches 100 foot in height, trains were able to cross the structure from 18th December 1843 onwards, a permanent ‘’Folkstone’’ (note the initial lack of a central ‘’e’’) station being provided on its eastern side. Folkestone West was the next station to follow, this being opened as ‘’Shorncliffe Camp’’ one mile to the west of the viaduct, on 1st November 1863. The harbour branch came into use on 1st January 1849 and finally, what is now known as ‘’Folkestone Central’’ was opened to traffic on 1st September 1884, a third of a mile west of the viaduct. From the outset, the station was named ‘’Cheriton Arch’’, but in September 1886 this was altered to ‘’Radnor Park’’.

Radnor Park, as it was then known, consisted of features which, although no longer exist at this location, can readily be found at those stations still constituted of SER architecture. Located upon an embankment, there were initially two platform faces provided. These were each protected by a canopy typical of SER character, from the cross-sectional design to the valance pattern. They replicated the arched examples still in existence at Paddock Wood and were each served by a covered footway at their ‘’Dover’’ ends, which descended to street level. The main building here was located on the southern side of the layout, immediately adjacent to and parallel with the platform canopy, and was one of the SER’s conservative single-storey clapboard efforts. At the western end of the ‘’down’’ platform was situated the signal box, of all-timber construction and to the SER’s own in-house design. One significant feature this station did lack was any form of goods yard, freight traffic instead being handled using the extensive sidings at the West (Shorncliffe) and Junction stations. The Radnor Park station of 1884 was, however, short-lived, for in 1890 a general rebuilding programme was begun; this saw the demolition of all structures except the signal box. The ‘’up'' platform was widened, and at its western end was lengthened with wooden planks. This was to accommodate a westward-facing bay line, giving the station a total of three platform faces. The ‘’down’’ platform received neither widening nor lengthening, but both surfaces received revised platform canopies and were linked by a subway; this had superseded the track foot crossing of the original complex. The canopies were to the same design as those implemented at Maidstone West and, incidentally, are still in existence at that location. Both sides were treated to brick-built station structures: these demonstrated unusually high pitched roofs like the buildings on the Sandgate branch and at High Brooms, the latter on the SER’s line to Hastings. Again, no goods yard was established with the rebuilt layout, but rolling stock sidings appeared to the west of the platforms, one either side of the running lines. The station subsequently became ‘’Folkestone Central’’ on 1st June 1895.

Throughout both SE&CR and SR eras, the station remained virtually unchanged; major alterations would instead be undertaken by BR. As part of the Kent Coast Electrification’s ‘’Phase 2’’, a thorough rebuild of Folkestone Central began in 1960. Both platforms were converted to island status by the quadrupling of the route between the station and Cheriton Junction; the existing station buildings had to be demolished to vacate space for the additional lines. The pleasing canopies also succumbed and the wooden extension of the ‘’up’’ platform’s western end was rebuilt using prefabricated concrete – the ‘’down’’ platform was also extended at its western end with the same material. The islands received ‘’V’’ shaped canopies to the same design as the 1959-installed examples at Chatham and St Mary Cray, and at the platforms’ eastern ends, subway lifts appeared. A ‘’power box’’ came into use at Folkestone Junction on 18th February 1962, this taking control of the area, and whilst the rebuilding of the Central station had been completed the previous year, it seems likely that the latter’s SER-designed signal box lasted until the signalling alterations. For the sake of completeness, mention will also be made of Folkestone Central’s station building of 1961. This ghastly structure, fabricated out of a mixture of corrugated metal and glass, was erected on the northern side of the layout and represents the typically poor architecture of the period.

After the opening of the Channel Tunnel and closure of Dover Western Docks in 1994, the Folkestone line lost its boat traffic. Consequently, the quadrupled section of line between Cheriton Junction and Central station was degraded to double-track, and the latter became a two platform station. Both islands were still in use, but their outer edges were now devoid of track. Degrading did not stop there and in 1999 it was decided to realign the track to allow the running lines to serve either side of the northern island. As a result of this, the southern of the islands went out of use completely and all structures upon it were demolished.

Corrections to this article gratefully received from Richard Weller 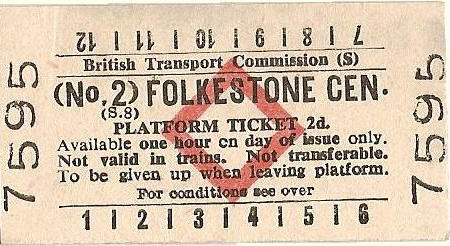 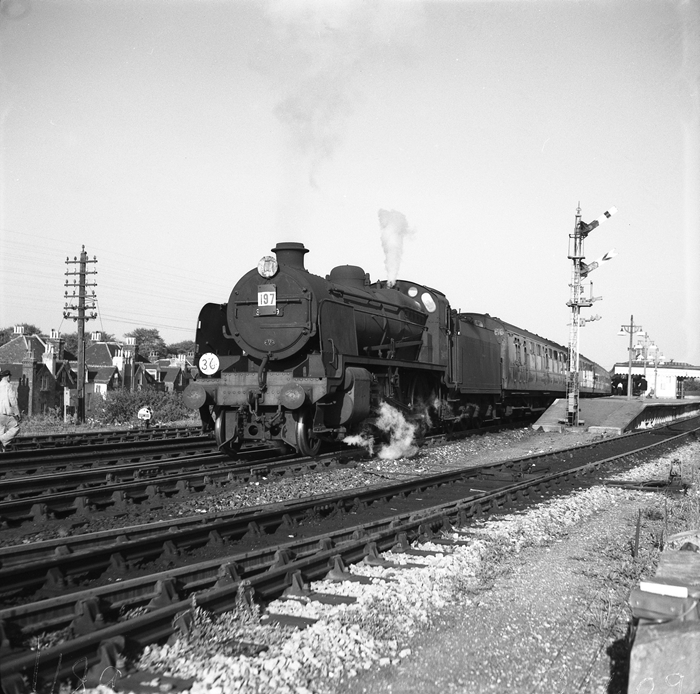 An ''N'' Class is seen leading a rake of Bulleid carriages west out of the SER Folkestone Central station in 1958, prior to the site's rebuilding. The service is for London Bridge via Tonbridge and Chislehurst. The line in the foreground led to the westward-facing bay platform, which at that time was numbered ''3''. Note the concrete bracket lampposts on the platform surface, complete with hexagonal shades. © David Glasspool Collection 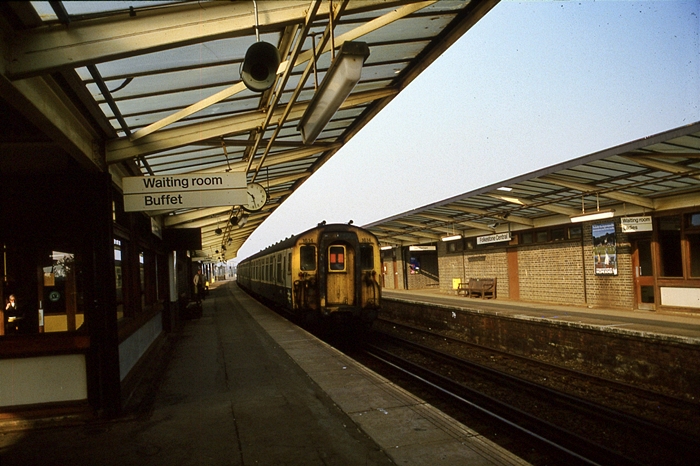 4 CEP No. 1614 is seen departing the ''up'' island platform, towards Folkestone West, on the 09:29 Ramsgate to Charing Cross. It is this platform which was taken out of use completely in 1999, the canopy and waiting room being demolished. © David Glasspool Collection 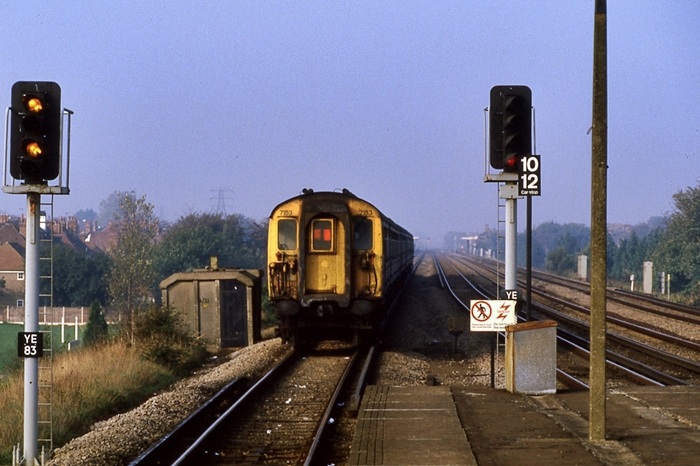 4 CEP No. 7153 is seen with the 10:25 Dover Marine to Charing Cross service. An impressive quadruple track layout is in evidence, as is Folkestone West in the background. Today, just two tracks remain. © David Glasspool Collection