In 1893, a comprehensive rebuild of the site began, involving the demolition of the original terminus station and the creation of a through affair. Two platforms were built around a tight curve, which eventually gave the line a south-easterly heading towards a timber-built pier. The latter jutted out from the shingle spit and was served by a single-track from the goods sidings. Stone-faced single-storey offices appeared on both platform surfaces, and these in turn were fronted by ornate V-shaped platform canopies. Built on a lattice iron frame, the canopies demonstrated the typical SER clover valance design (an example of which can still be seen in existence at Maidstone West). The platforms were linked by an enclosed lattice footbridge, which was to the same design as that still in evidence at Maidstone West, and intercepted the canopies at their halfway point. A second, exposed lattice footbridge was also erected at the northern extremity of the station site, adjacent to the level crossing.

As part of the revisions, the goods yard to the east of the platforms was wholly revised and enlarged, and consequently, the aforementioned warehouse became sandwiched within a maze of tightly curved sidings. Over twenty-five sidings eventually appeared at the harbour site (including carriage berthing facilities west of the platforms), three of which entered the warehouse. The majority of the goods yard required a reversal manoeuvre to gain access: locomotives would proceed through the Harbour station platforms, and on reaching their ends, would be presented with a trailing junction. Here, goods and carriage sidings converged with the platform lines, and both sets of metals lead to a head shunt upon a timber-fabricated pier. As part of the same works, piecemeal rebuilding of the pier from wood to concrete began, and overall lengthening of the structure also occurred. A single SER-designed all-timber signal box was in evidence at station: this was positioned upon the southern end of the ‘’up’’ platform and controlled the junction between the platform lines and the carriage sidings. A second signal box, again of SER design, could be found on the northern side of the inner harbour water, built upon a brick pier jutting out from the west side of the railway viaduct.

The continued southerly extension of the pier, coupled with the rebuilding of it in concrete, gave rise to a second station. A single wooden-fabricated platform was erected alongside the ‘’up’’ track, south of the existing station, in 1905. It was physically detached from the harbour station, being separated from the latter’s ‘’up’’ platform by the single-track trailing connection from the carriage sidings to the west. The platform was protected by a flat-roof timber canopy, demonstrating the familiar clover-patterned valance. The two sites were connected by a lengthy exposed metal footbridge, and access to the pier required the payment of a toll. A second signal box was opened to control the complex arrangement of tracks upon the extended pier.

Circa 1915, track revisions took place at the northern end of the site, which involved removing the ‘’down’’ track wagon turntable sandwiched in-between the level crossing and the platform ends. A new signal box came into use upon the northern end of the ’’up’’ platform: this was built by the SE&CR, but clearly derived its design from those earlier cabins erected by contractor Saxby & Farmer. Complete with a brick base, timber upper half, and pyramid-shaped roof, a much larger example, but of the same ilk, came into use with the newly built Dover Marine terminus in February 1915.

Under the Southern Railway, changes at Folkestone Harbour were substantial. These commenced in 1930 with the removal of the lattice-patterned swing bridge across the inner harbour entrance. This was replaced by a heavier and more robust single-span steel bridge, which could support greater weight. The strengthened swing bridge would indeed have been immediately useful, for during the same decade, the SR tested the use of ''W'' Class 2-6-4 and ''Z'' Class 0-8-0 engines on the harbour branch. These were powerful locomotives, which were able to haul heavy loads up inclines and negotiate flying junctions with ease. However, restricted clearances put paid to their continued use on the Harbour line, and banking engines remained in the form of the 1910-introduced 0-6-0 R1 Class. The greatest of the SR’s works at the site commenced in 1938: the ‘’down’’ Harbour station platform was extended southwards, virtually doubling its length, and bringing its southern end in line with the sea end of the isolated pier platform. This produced a platform measuring about 215 yards in length, protected by a steel-framed canopy with a plain timber valance. The gap in-between the wooden pier platform and the Harbour station’s ‘’up’’ surface could not be in-filled to produce a similarly-long area, because between the two was the single track trailing connection with the carriage berthing sidings. As a consequence, the somewhat unusual arrangement of having a single, elongated ‘’down’’ platform, combined with two separate ‘’up’’ platform sections, was retained. At the southern extremities of both the ‘’down’’ and pier platforms, an enclosed concrete footbridge was installed. The enclosed lattice footbridge of SER origin, within the confines of the original Harbour station, had been removed in 1920, under SE&CR auspices. 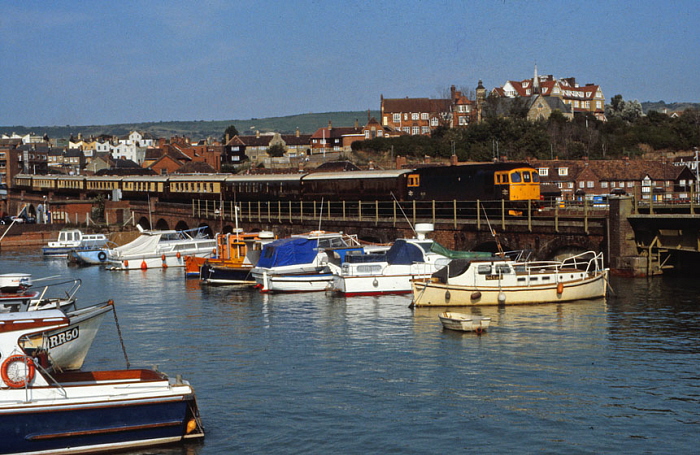 The tide was in when this BR Blue Class 33/2 was seen drifting over the famous harbour viaduct with the VSOE (or, rather, British Pullman) from London Victoria. The British Pullman made its debut in April 1982, the first trip being a one-off run between Victoria and the Sussex Coast to open the Brighton Festival. Regular services for the luxury train commenced in May. © Chris 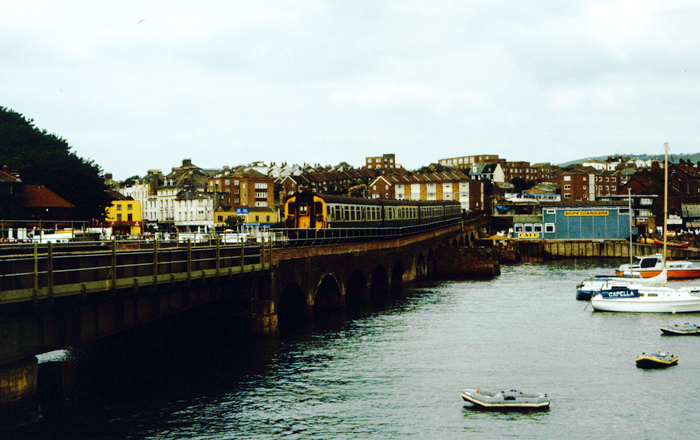 4-CEP No. 1541, forming the 1220 ex Folkestone Central (the unit was detached from a service originating at Charing Cross), is seen crossing the Harbour Viaduct as it approaches Folkestone Harbour Station. Note the abrupt change of gradient part way across the viaduct. © David Morgan 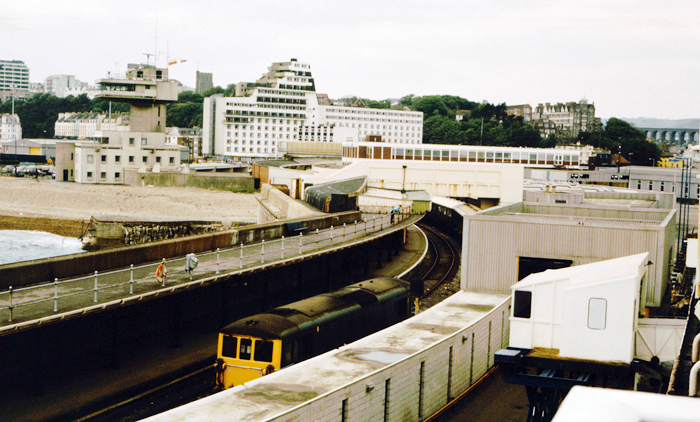 Viewed from aboard the MV Hengist, an unidentified Class 73 is seen running round empty VSOE Pullman stock in platform 2; passengers from the luxury train will have already joined the 1315 sailing to Boulogne Maritime. Running along the harbour wall and above platform 1 is a walkway that could be accessed by the public, mainly fishermen, upon payment of a small fee. The background is dominated by the ocean liner-shaped Grand Burstin Hotel, whilst the Foord Viaduct carrying the Folkestone to Dover main line can just be seen on the far right. © David Morgan