Mention should be made of the ‘’Continental Traffic Agreement’’ between the SER and LC&DR. Formally signed on 7th October 1865, the contract stated that the receipts from all Continental traffic stretching from Hastings to Margate was to be directed into a common pool of funds. Also included within this scheme was all domestic traffic between the capital, Folkestone, and Dover. The money accumulated in this fashion would subsequently be reallocated to the companies, the SER and LC&DR initially receiving 68% and 32% of the takings respectively. A hidden agenda of the SER’s during the 1881 rebuilding of Shorncliffe Camp was to deprive the LC&DR of funds. To do this, the station was recreated on a much larger scale than its predecessor: this would attract local passengers away from Folkestone Junction and Harbour stations. Then, by retaining the name ‘’Shorncliffe Camp’’, the SER could claim that the station was in fact not part of Folkestone, thus was not bound by the agreement! Unfortunately for the company, the LC&DR’s subsequent legal action of 1887 cost a significant sum in compensation - some £85,000 - and Shorncliffe Camp was included within the agreement; the existing name was, however, retained.

The Southern Railway brought early change to the station’s name. On 2nd July 1926, the ‘’Camp’’ suffix was dropped; 40,000 Canadian troops had been in training at the nearby British Army base during the first half of World War I. The SR altered the lamppost design at the station, but even more significant was the degrading and subsequent closure of the Elham Valley Line at Cheriton Junction, which removed Shorncliffe’s importance as an interchange point for such services. However, in retrospect, this branch to Canterbury was always loss-making, which resulted in the majority of it closing to passenger traffic on 2nd December 1940. This was not before the line’s singling during World War I. Only the small stretch between Cheriton Junction and Lyminge remained in use: passenger traffic over this ceased on 16th June 1947 and total closure came on 10th October of the same year. Despite this, the additional third track installed for slow traffic from the branch remained in use and indeed, as part of the Kent Coast Electrification, was to be joined by another line. During 1960 / 1961, the stretch of line between Cheriton Junction and Folkestone Central was quadrupled, which included the complete rebuilding of the latter. As far as Shorncliffe was concerned, the loops were opened out as running lines. This required the rebuilding of the ‘’up’’ platform’s western end, which followed the curvature of the loop line. The decision was also taken at this time to rebuild both platforms in prefabricated concrete. Electric services commenced on this stretch of line on 12th June 1961, and although Folkestone East power box came into use on 18th February 1962, it would seem likely that Shorncliffe’s cabin remained open beyond this date for the existing goods yard. Most goods traffic was officially withdrawn from the site as of 26th April 1965, but coal continued to be handled here until 22nd April 1968. Meanwhile, further changes had occurred: the bay platform had gone out of use and the ornate canopies had been replaced with shorter plain metal types. On 10th September 1962, the station had also been renamed ‘’Folkestone West’’, now harmonious with the Central and East stations. The final spout of degrading came after the 1994 closure of Dover Western Docks as a result of the Channel Tunnel opening. With the loss of boat traffic over the Folkestone Line, the quadrupled section between Cheriton and Central station was degraded to double-track working, which prevented any passing at the West station. Consequently, the running lines diverge apart at this point to serve the spaced-out platform faces. 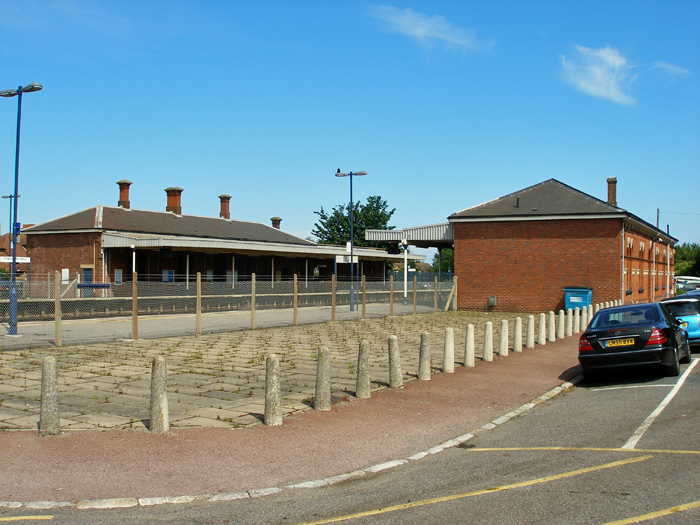 Until the late 1960s, the area in the foreground of this eastward view was host to goods sidings, these of which dealt with coal up until April 1968. Sadly, the canopies have been truncated substantially and timber valances have given way to corrugated metal. © David Glasspool 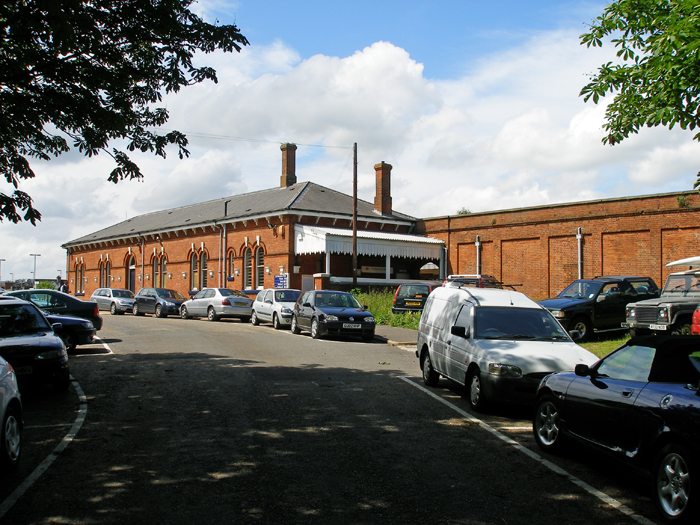 Worthy of note is the still extant ornate canopy over the side entranceway to the "up" platform: this is the very same valance design as that still in use at St Johns. Both "up" and "down" buildings at Folkestone West are a variation of standard SER architecture, demonstrating arched sash-style windows and hipped roofs. Similar buildings were brought into use at stations on the Dover & Deal Joint line, Chislehurst, and Ashford, to name a few locations, although those at the latter were demolished during Kent Coast Electrification rebuilding works. © David Glasspool 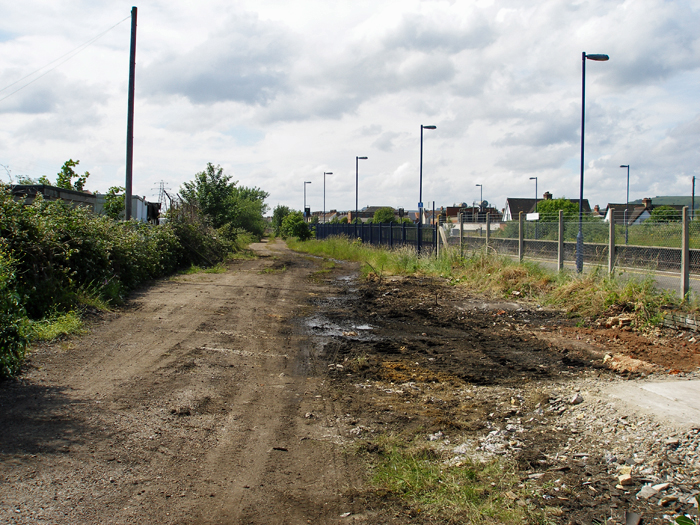 This is the former site of the ''up'' side goods yard, which remains undeveloped and instead serves as road access to the line. © David Glasspool 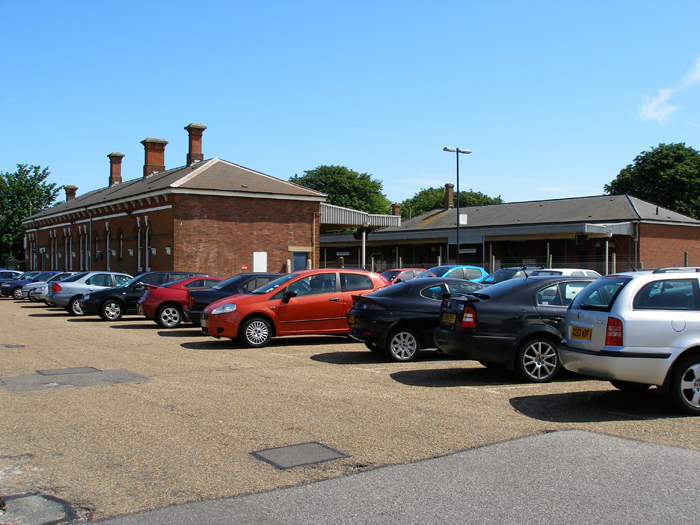 The bay platforms on the "down" side formerly came in from the right. Their site is now partly used for car parking, but much of the land appears to have become a junk yard. The station building here is a mirror image of that on the "up" side, save for some later chimney removals. © David Glasspool