In 1913, enlargement and re-signalling works were undertaken at the site. The railway cutting was widened south of the station to incorporate a third track, thus converting the ‘’up’’ platform into an island. This was lengthened at both ends at this time and the waiting shelter was superseded by a splendid W-shaped canopy. The latter featured an intricate timber valance akin to those designs which later appeared at Ashford and Margate, and underneath were built crčme-brick platform offices. Two new signal boxes also came into use, to replace the existing cabin positioned alongside the Dockyard branch. Brick-built with hipped slated roofs, these were both erected by the SE&CR, but were heavily based on those earlier designs of contractor Saxby & Farmer. ‘’A’’ box was built into the slope of the widened railway cutting on the ‘’up’’ side and overlooked the eastern end of the island platform. The 44-lever ‘’B’’ Box was positioned 374-yards east of ‘’A’’ Box, adjacent to the level crossing, on the ‘’up’’ side of the running lines. A lattice footbridge was also provided beside the crossing at this time, allowing pedestrians to cross the running lines when the gates were against the road.

During the aforementioned works, a coal yard was established on the ‘’down’’ side. This was situated within the triangle created by the goods sidings and diverging Dockyard branch, and comprised a pair of eastward-facing sidings. Changes had also been enacted on the ‘’up’’ side, where two of the engine shed’s tracks had been extended through the rear of the building. Since the formation of the SE&CR in 1899, the shed had paired with the ex-SER depot at Strood, both sharing the shed code ‘’10’’.

On 9th July 1923, the station became ‘’Gillingham (Kent)’’, to avoid confusion with the place of the same name in Dorset (although the pronunciation of each differs). The engine shed was re-roofed in 1931 and, in the following year, the Southern Railway undertook a further station enlargement scheme. This involved constructing a new ‘’high-level’’ station building, 170-yards west of the original station house, which straddled the tracks and fronted onto a road bridge. New canopies with plain riveted-metal valances were erected on both platform surfaces, although a part of the existing SE&CR canopy on the island, complete with offices, was retained. The new ‘’down’’ canopy was upward-sloping and extended for 355-feet, whilst the SR portion of the island platform canopy stretched for 140-feet. Lift shafts were erected on both platforms and these were linked to the new station building by a series of roofed metal walkways. In spite of these works, the original EKR Station House survived.

In 1935, in response to a loan agreement between the Government and the four main railway companies, a series of improvement programmes were proposed. On the SR, much of this money was to be spent on further electrification on Western, Central, and Eastern Sections. Part of this encompassed electrification from Swanley to Gillingham and Gravesend to Maidstone, including the connecting spur between North Kent and Chatham lines at Strood. Electric services had previously reached Gravesend Central on 6th July 1930 and Sevenoaks (via Orpington and Swanley) on 6th January 1935. The scheme was priced at Ł1,750,000 (about Ł94,700,000 at 2011 prices) and involved converting 117 track miles. At Gillingham, which would form the end of the suburban electrification system, it was decided to establish an EMU depot. For this, a large area of land east of the level crossing, on the ‘’up’’ side of the line, was purchased – until this time, the site had been occupied by allotment gardens. An eastward-facing four-road EMU cleaning shed, 820-feet by 60-feet and clad with asbestos, was erected. This was accompanied by a trio of sidings running along its southern elevation, a pair of reception lines feeding off the running lines, and a carriage washer. To access the cleaning shed, a reversal manoeuvre into a head shunt was required. Trial running of electric trains over the new third rail sections started in May 1939 and public electric services commenced on 2nd July 1939. This resulted in closure of engine sheds at Strood and Maidstone West (which had principally provided the tank engines used on local services), but the retention of that at Gillingham, albeit with much reduced allocation.

Improvements under British Railways began in 1955 with the commissioning of a coal gantry. This was installed across three tracks between the engine shed and turntable, and allowed coal to be hoisted and moved between lines. In February of the following year, the Kent Coast Electrification Scheme was approved by the British Transport Commission at a cost of Ł25,000,000 (Ł487,000,000 at 2011 prices). This was split into two phases, the first involving the laying of third rail from Gillingham to Ramsgate and Dover, and along the branch to Sheerness-on-Sea. Works at Gillingham started in 1958 with the extension of both platform surfaces at their eastern ends with prefabricated concrete. On Sunday 26th April 1959 at 00:50, colour aspect lights were brought into use between Gillingham and Western Junction (Sittingbourne). Existing cabins at Rainham and Newington were taken out of use, a new ‘’power box’’ commissioned at the former, and Gilingham ‘’A’’ and ‘’B’’ boxes retained. Trial running of electric trains through to Ramsgate commenced on 1st June 1959. The final day of scheduled steam haulage over the ‘’Chatham’’ main line was on 14th June 1959, the accelerated electric timetable coming into use the following day.

On electrification, the remaining locomotive allocation at Gillingham was transferred to Tonbridge, the shed at the former being closed and subsequently demolished. The goods yard on the ‘’down’’ side of the line remained operational, not closing to general traffic until 4th May 1970, but the sidings remained thereafter to stable wagons. Previously, on 21st June 1964, the level crossing wicket gates were replaced by automatic lifting barriers controlled from the adjacent signal cabin. On 21st January 1973 ‘’A’’ box was closed, its functions being assumed by ‘’B’’ Box (which, as a result, was renamed ‘’A’’ box). Sadly, it was around this time that the original Station House on the ‘’down’’ side, which had come into use with the site in 1858, was demolished. Upon its site, a pair of dreary two-storey-high CLASP blocks were built. This also appears to be the period when the ''(Kent)'' suffix was dropped from the station signs. 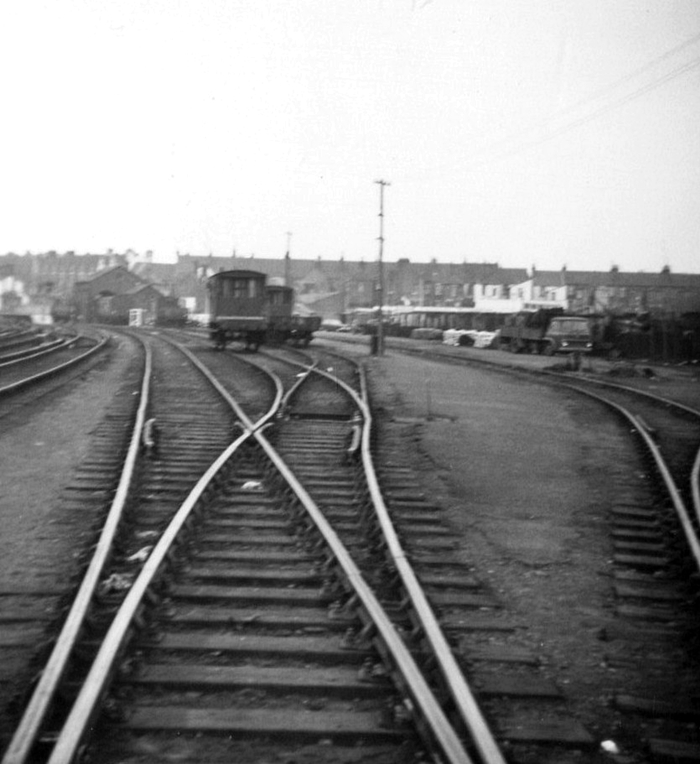 A westward view of the goods yard on the ''down'' side of the line shows the original goods shed in the background, with pitched roof and arched entrance. The end of the station's ''down'' platform can just be seen on the far left. © Roger Goodrum 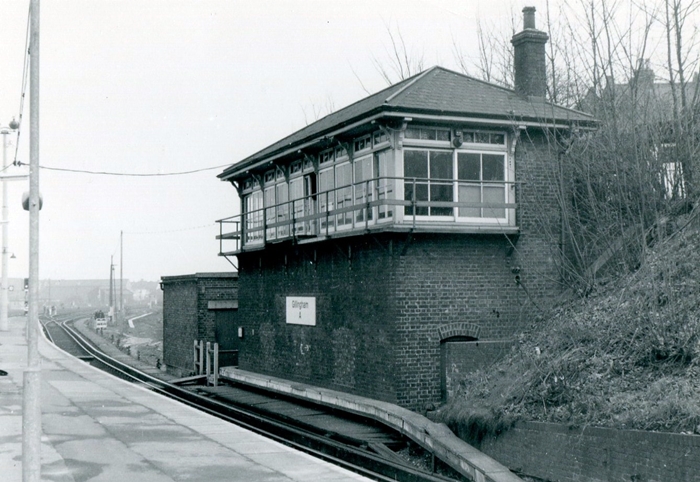 Gillingham ''A'' Box was situated at the eastern end of the station, within the embankment on the ''up'' side. The brick structure immediately beyond the signal box is the relay room, which was commissioned as part of the 1959 Kent Coast Electrification Scheme. This allowed the cabin to continue to control points after re-signalling. Closure came in January 1973. © Roger Goodrum 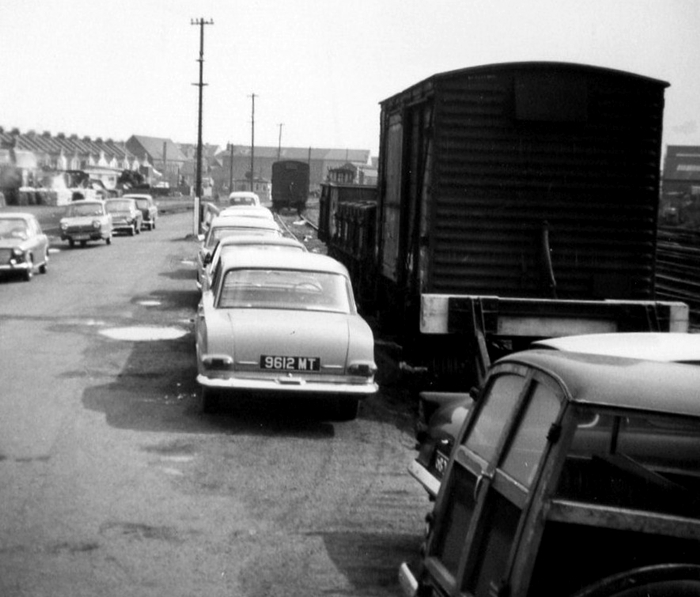 This is an eastward view of the ''down'' side goods yard - the running lines are evident on the extreme right. On the left-hand side can be seen a Reliant Regal van. © Roger Goodrum