During the SR alterations, the surviving SER ‘’down’’ side building acquired toilet facilities. To accommodate these, a rather mean concrete extension was added to the timber building’s eastern elevation – nearby Pluckley received identical treatment. An oddity at this station, however, was that despite the modifications, both the ‘’down’’ platform and new ‘’up’’ platform continued to be hosts of the SER’s diamond-shaped gas lamps. The SR’s trademark ‘’Swan Neck’’ variant had been introduced a number of years earlier, particularly at those sites within the electrified suburban network. Further points of interest include the erection of timber waiting shelters on both platforms, and the retention of the original corrugated iron shelter on the revised K&ESR platform. The goods shed and sidings on the ‘’down’’ side, west of the station, were retained during the works.

Nationalisation in 1948 saw the independent K&ESR absorbed into British Railways’ Southern Region, but the branch line continued to use a separate platform at Headcorn. From the outset, this platform had proclaimed ‘’Headcorn Junction’’ on its name boards, the suffix of which the ex-SE&CR station did not share. The line had for long been loss making, and it was not long until BR axed it from the network: the last Robertsbridge to Headcorn passenger services ran on 2nd January 1954. The Robertsbridge to Tenterden Town section of line remained in use solely for goods traffic, but track lifting between the latter and Headcorn proceeded almost immediately. It was also around this time that the diamond-shaped gas lamps of the ‘’main line’’ Headcorn station were replaced by electric lighting supported upon prefabricated concrete bracket posts. Rationalisation of the BR layout was also set to occur in the following decade, as the Kent Coast Electrification Scheme began to gather momentum, in addition to the decline in rail traffic as a whole.

Third rail was installed along the ex-SER main line to Dover during 1960 – the existing limit of suburban electric operation on the route was at Sevenoaks Tubs Hill. Three-aspect colour lights were brought into use between Tonbridge and Headcorn on 1st April 1962; their scope was extended eastwards to Wye, Westenhanger, and Ham Street on 29th of the same month. As a result, control of the ‘’up’’ platform loop and through line at Headcorn passed to the then new Tonbridge ‘’power box’’, whilst the ‘’down’’ loop and through line came under the control of the newly-commissioned Ashford Panel. The SR signal box of 1930 remained in existence at Headcorn as a back-up to take control of both platform loops and through lines, should there be any failure of either Ashford or Tonbridge Panels. It remained in this function until total abolition on 28th July 1968. Freight traffic had since ceased on 2nd April 1962, and the goods yard was later wholly redeveloped into the customary car park. The site had also become host to an electric substation, this being one of sixteen situated between Sevenoaks Tubs Hill and Dover.

The greatest transformation of this station was undoubtedly that enacted during the 1980s. By 1982, the concrete bracket platform lampposts had given way to more modern metal types. Then, in late 1988, all platform buildings were demolished as part of a major modernisation scheme, which left the SR footbridge of 1930 as the oldest surviving structure at the site. The platforms were lengthened by 250-feet at their western ends with concrete components, and a brand new main building came into use on the former site of the SER timber structure. The replacement building was of red brick construction, single-storey, 80-feet in length, and came complete with a pair of pitched roof sections. It was opened with ceremony by MP for Maidstone, Ann Widdicombe, on 11th May 1989. The platforms received new mesh metal seating, and bus shelters appeared the ‘’up’’ side.

In Summer 1991, it was announced that three sites in Kent had been identified for the building of freight loops, in connection with the opening of the Channel Tunnel. Each was to be about 900 metres (985 yards) in length, and the selected locations were Borough Green, Headcorn, and Otford. The loops were seen as crucial to keeping slow freights out of the paths of Eurostar services and the existing domestic trains of Network SouthEast. At Headcorn, the former site of the K&ESR track bed on the station’s ‘’up’’ side was chosen for the electrified freight loop. The infrastructure works were completed in time for the first Eurostar services, which commenced on 14th November 1994, and the Headcorn project had also included the replacement of the SR footbridge of 1930. In its place, a larger two-span structure, some 120-feet in length, was brought into use, and this stretched both the quadruple-track in-between the platforms and the freight loop. This ensured that access to a public footpath was retained. The transformation of Headcorn was now complete, and today the station bears no resemblance to the rural affair which once existed under SER auspices. Not everything has been wholly swept away, and within the vegetation behind the Chunnel freight loop remains a curved section of the long disused concrete platform of the K&ESR. 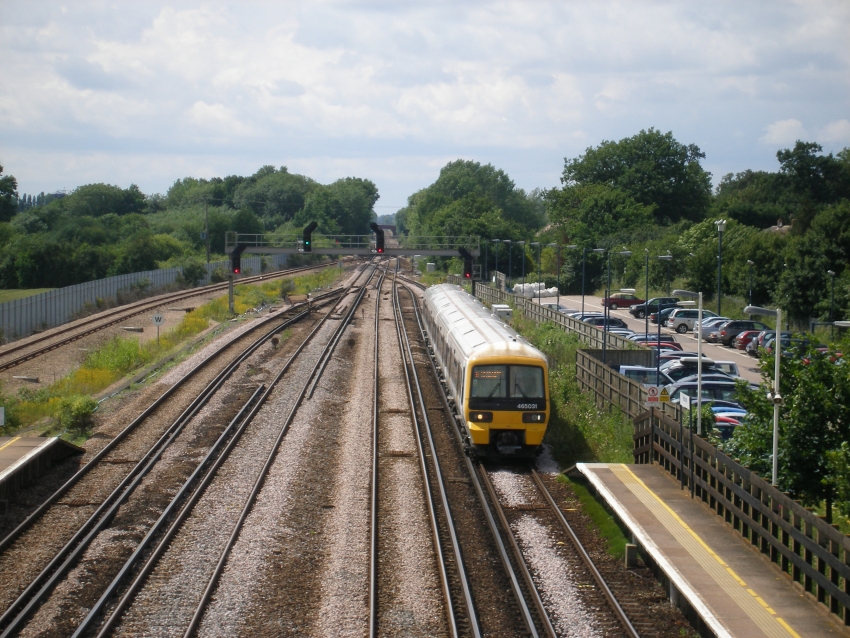 A westward view depicts Class 465 No. 465031 trundling along the ''down'' platform loop with an Ashford stopping service. On the right is the car park, which now sits on the former site of the goods yard. On the left can clearly be seen the CTRL loop, completed in 1994. © David Glasspool 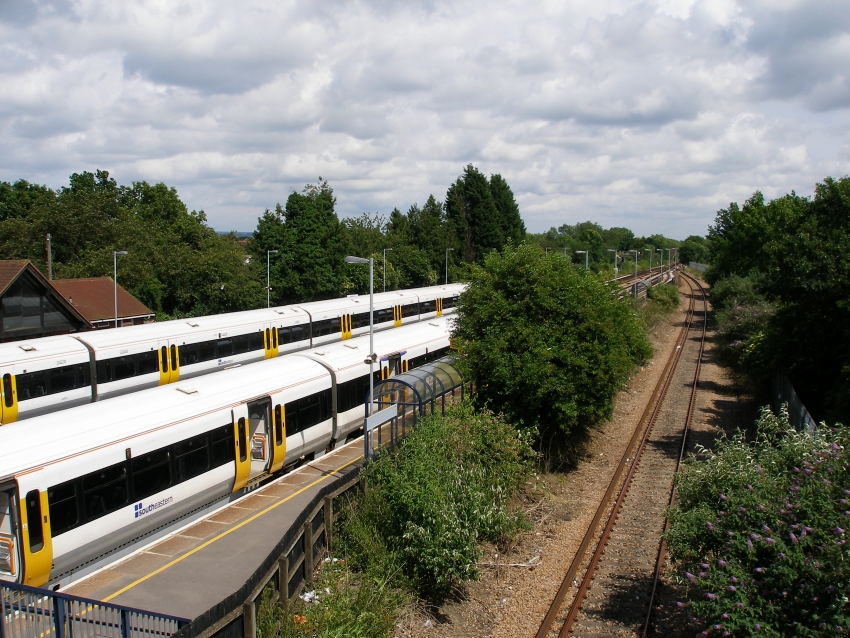 An eastward view shows the Channel Tunnel freight loop in the foreground, passing over the former site of the K&ESR station. The latter has not been wholly obliterated, however, and a section of concrete platform can still be found in the vegetation on the right, beyond the palisade fencing. Stabled in the ''down'' loop is No. 465031, whilst in the ''up'' loop is No. 465922. © David Glasspool 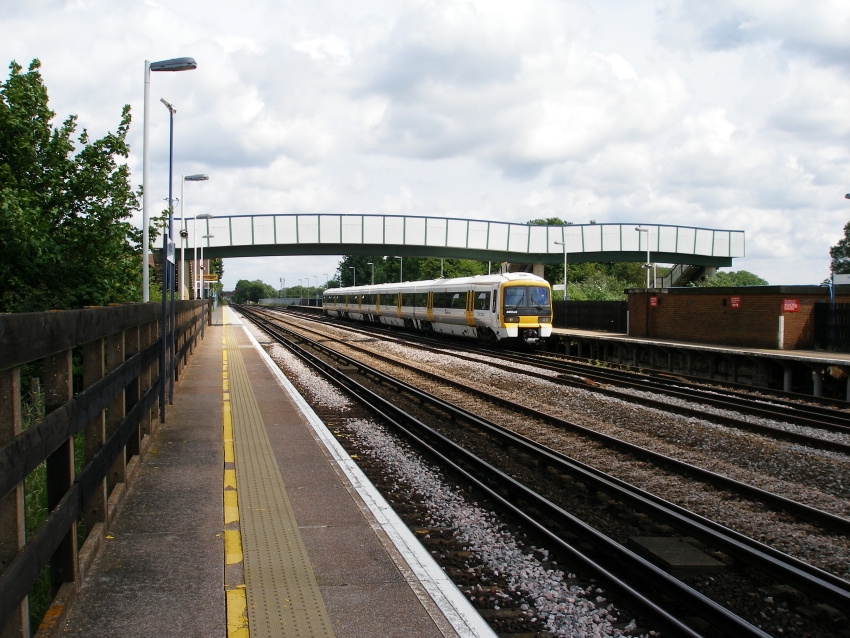 Another Eastward view shows No. 465922 once again, stabled in the ''up'' loop waiting for a fast service to pass. In the foreground are the platform extensions which date from the station's rebuilding in 1989. The red brick structure on the right is an electricity substation, whilst above it is the second span of the footbridge which gives access to a public footpath. © David Glasspool 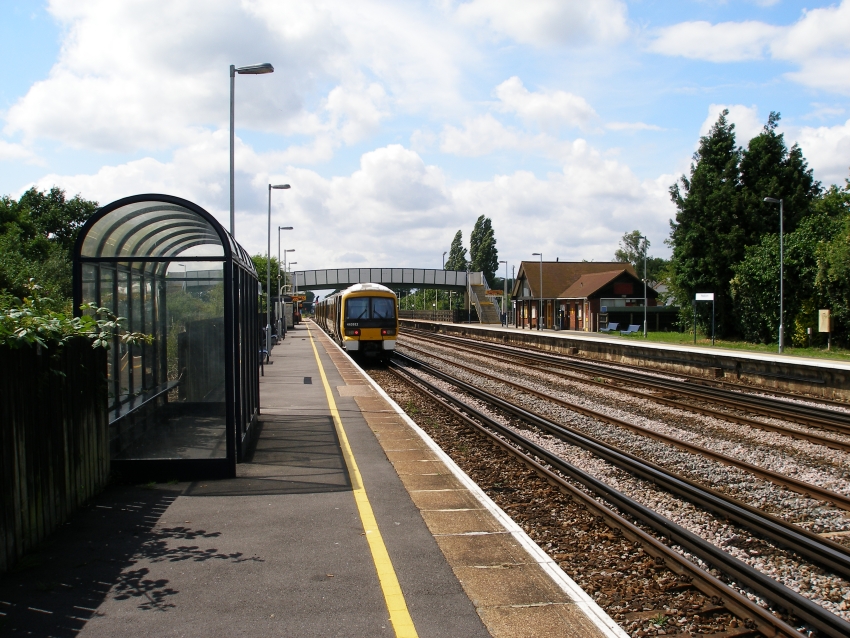 A final westward view shows the tidy ''down'' side station building, dating from 1989, in addition to the platform extensions beyond the footbridge. On the left is one of three bus shelters received by the ''up'' platform during the 1989 rebuilding works. © David Glasspool