This was once an attractive market town station which, although fortunate to have retained a double-track formation since 1967, has witnessed virtually all infrastructure of historical interest obliterated. Even the platform surfaces have been wholly rebuilt in breezeblock fashion, making Honiton a decidedly clinical, modern affair. The origins of the line through the area can be traced back to 1854, when a nominally independent concern known as the ‘’Salisbury and Yeovil Railway Company’’ – backed by the LSWR – lobbied Parliament for powers to build a single-track line between its namesakes. The proposal received formal approval, and the first sod on the route was cut on 3rd April 1856. Trains began running as far as Yeovil on 1st June 1860, and a single-track extension through to Exeter was commissioned on 19th July 1860, Honiton coming into use on this date. Early commercial success of this route saw doubling of the entire Salisbury to Exeter section in 1870.

Sir William Tite was the architect for the majority of stations west of Salisbury. Tite had earlier been employed by the London & Southampton Railway (later renamed LSWR) to produce stations at Nine Elms, Gosport, and Southampton, and had also been architect for the Necropolis Funeral Company. At Honiton emerged an attractive Gothic main building, situated on the ‘’down’’ platform, constituted of red brick and frescoed at its edges and around the windows with stone lining. This was a two-storey-high standardised design, which appeared at neighbouring Colyton Junction (later Seaton Junction) and Feniton (later Sidmouth Junction) stations, and can still be found in existence today at Axminster and Whimple. Attached to the building’s platform-facing elevation was a flat-roofed canopy demonstrating an unusual irregular saw-tooth patterned valance. This was a feature of most of those stations credited to Tite between Salisbury and Exeter, but the saw-tooth design was lost by many buildings very early on in their existence. Also to be found on the ‘’down’’ platform was a bookstall and telegraph office, and a letterbox was incorporated within the wall of the main building. On the ‘’up’’ platform was situated another standardised feature of the route: the waiting shelter. These were built in sympathy with the station buildings and featured twin gabled pitched-roof sections flanking a central piece with a forward-sloping roof. That at Honiton was of tongue-and-groove timber construction, but others, such as the waiting shelters at Colyton Junction and Feniton, were brick-built. Linking the platform surfaces was an iron footbridge, which was roofed and fully glazed.

The goods yard was situated on the southern side of the layout, behind the ‘’down’’ platform, and comprised three westward-facing sidings, a dock line, an eastward-facing siding, and a headshunt. A 90-foot-long pitched-roof goods shed was in evidence, constituted of the same red brick as the station building, and extending from the structure’s southern side was a flat-roofed canopy, also 90-feet in length. The westward-facing sidings were linked together at their terminating ends by small wagon turntables, which allowed trucks to be switched between lines without a laborious shunting manoeuvre by a locomotive. A pair of eastward-facing sidings also existed on the ‘’up’’ side of the line, west of the platforms; as the photographs show, one of these sidings appears to ascend upon an embankment, since the running lines are falling at a gradient of 1 in 300 in the Exeter direction. The layout was controlled by an attractive LSWR-designed signal box, positioned just beyond the western end of the ‘’down’’ platform. Signal cabins were yet again another standardised feature west of Salisbury, featuring clapboard upper halves, hipped slated roofs, horizontally-sliding windows and, finally, bases of either brick or local stone construction.

Before moving on to the changes enacted at the site, it is worth making brief mention of the water tower. This could be found beyond the eastern end of the ‘’up’’ platform, and rivalled the station building in height. It comprised a substantial red brick base of identical design to that which also appeared at Axminster. Crewkerne was similarly equipped, although its water tower base was fabricated from local stone. 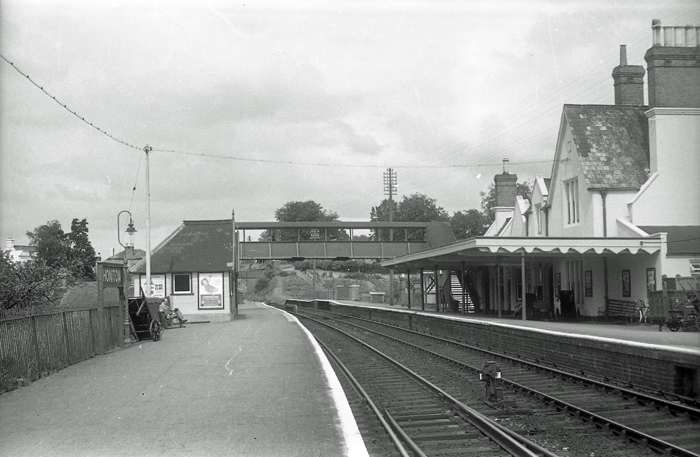 A London-bound view shows the station when it still sat on a proper main line, with all platform structures in tact. On the right is Tite's splendid main station building, built to the same design as those which still survive at Axminster and the closed Seaton Junction stations. As per at the latter, the slated pitched roof had been extended forward beyond the limits of the wall. Note the huge platform canopy and the irregular jagged valance, another standard feature of the route. On the left can be seen the "up" side tongue-and-groove timber shelter of generous proportions, comprising two pitched roofs linked by a central span. The curious bump of the "down" platform in the background passed over a road. The shunt signal and points blades in the foreground were that of a trailing crossiver between the running lines. The platforms themselves aside, the only structure in this view to remain today is the footbridge, albeit now without roof. © David Glasspool Collection 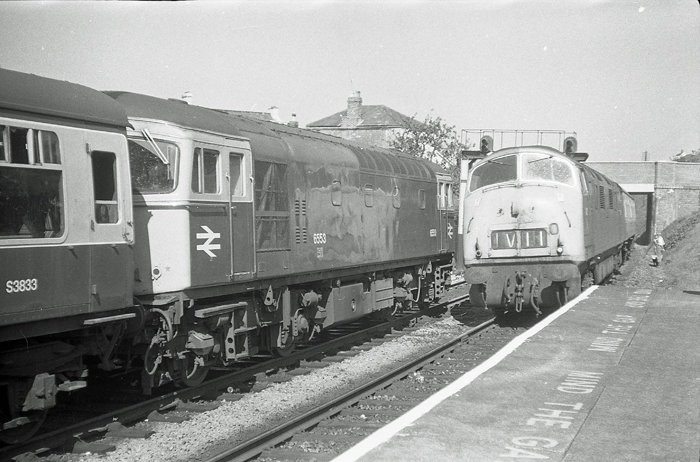 A "Warship" diesel-hydraulic enters Honiton from the Salisbury direction, the class being in terminal decline by the time of this view. These diesels started to take over from steam traction on Waterloo to Exeter trains in August 1964, after lines west of Salisbury had been transferred from the Southern Region to the Western Region. Waiting to depart London-bound is diesel electric No. 6553 (later Class 33 No. 33035). Since singling of this part of the line in 1967, trains could only pass each other in the station. © David Glasspool Collection 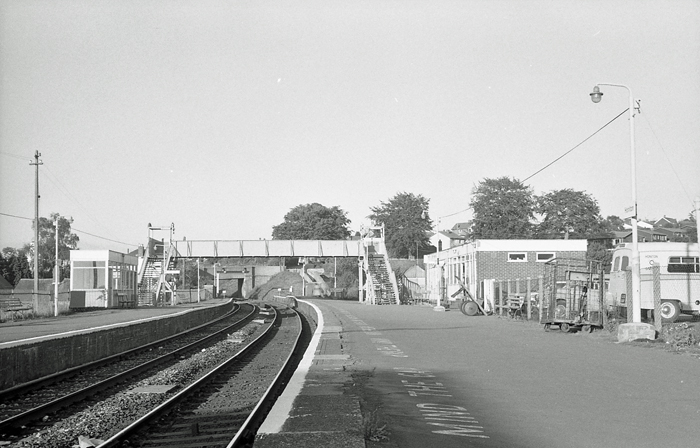 A view in the Salisbury direction shows the sad state of affairs after demolitions at the station left the footbridge as the only structure of LSWR origin still standing. Of course, the platforms dated from the earliest days, and vintage iron railings still lined the rear of the "up" platform (on the left). The CLASP ticket office on the "down" platform resides on the precise site of Tite's station building of 1859. © David Glasspool Collection 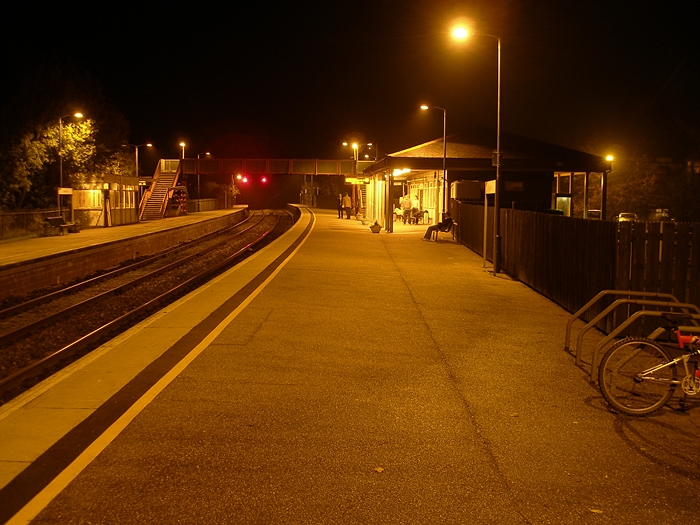 A second Salisbury-bound view shows that some effort had been made to give the ticket office a bit of style, a hipped roof being added in 1994. The iron railings remained at the rear of the "up" platform, but timber fencing had appeared on the "down" side since the 1979 view. © David Glasspool 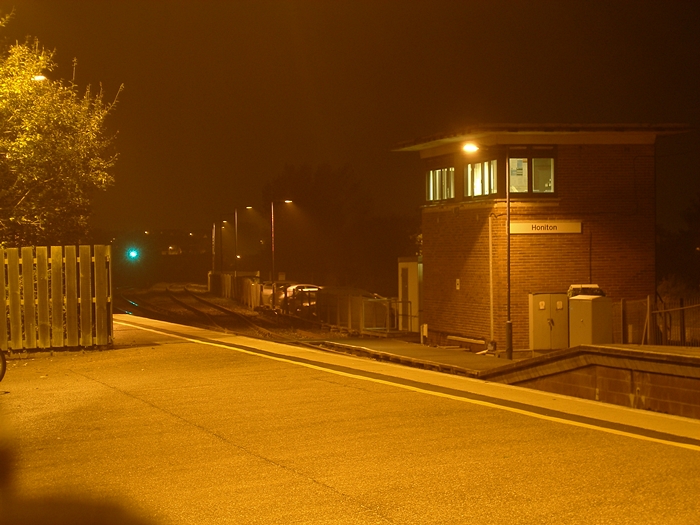 The signal box of 1957 remains in use at the western end of the layout, and borders with the cabin at Chard Junction in the east, and Exmouth Junction in the west. The remaining ''up'' engineers' siding can be seen curving to the right of the green light, and this is controlled from a single lever ground frame, rather than from the signal box. © David Glasspool