The first line planned for the area was that of the ‘’Ouse Valley Railway’’. This was to spur off the Brighton main line just south of Balcombe, and assume a south easterly heading through Uckfield, to meet the Hailsham branch (which was later extended northwards to form the ''Cuckoo Line''). The scheme had been instigated by the London Brighton & South Coast Railway, and although it was acknowledged from the outset that this would be a loss-making venture, it was nevertheless a necessary project. The company had watched with modest concern in 1864, as the LC&DR submitted a Bill to Parliament for the construction of a line into the heartland of the LB&SCR, Brighton, which was to spur off the former’s Dover trunk route at Beckenham. However, it was when the SER submitted a Bill to Parliament in the same year, for a line to Eastbourne, that alarm bells began ringing in the LB&SCR camp. On 23rd June 1864, the latter subsequently responded by acquiring Royal Assent for the building of the ‘’Ouse Valley Railway’’ (OVR): the line’s sole objective was to provide a shorter route for the LB&SCR between the capital and Eastbourne. The line’s success would not be measured by passenger receipts, but rather, whether or not it prevented the SER profiting from what was then a LB&SCR stronghold. Later in the same year, however, talks between LB&SCR and SER Companies had been productive, so much that the latter agreed not to go ahead with its Eastbourne plans; the OVR scheme was also now obsolete, at least in the eyes of the SER.

Regardless of the SER’s retrenchment, the LB&SCR had other ideas, and much to the annoyance of the former, Parliamentary Approval was received for the building of a line between Hellingly, again on the ‘’Cuckoo Line’’, and St Leonards. This was effectively an extension of the OVR, which was still very much on the LB&SCR’s agenda, and provided the company with a shorter route between London and Hastings. Construction of the OVR commenced in 1865, at the Balcombe end of the route, and in the meantime, the SER pondered its next move. The company responded to the LB&SCR’s actions in 1866, with the ‘’London Lewes & Brighton Railway’’, a scheme it promoted jointly with the LC&DR. Royal Assent was received on 6th August of that year, and the fifty-five mile line to the Sussex Coast was to leave the LC&DR’s Dover route at Beckenham, construction work costing a total of £3,000,000 (about £197,225,735 at 2007 prices). However, in June 1866, London Discount Wholesale Bank ‘’Overend, Gurney & Company’’ went into liquidation, with outstanding debts of £11,000,000. The bank had made significant investments in railway schemes, including those mentioned, and over ensuing months, these fell on stony ground. The LC&DR became insolvent, ending the joint line scheme with the SER, and the LB&SCR wholly abandoned the OVR, despite the beginning of works in the previous year.

A second railway scheme for this area of Sussex emerged a decade later. On 30th November 1876, a Bill was deposited to Parliament for the formation of the ‘’Lewes & East Grinstead Railway’’, promoting a line between the namesake locations. This proposal, which received Royal Assent on 10th August 1877, was wholly independent of the LB&SCR, and had instead been formulated by a group of local, and very wealthy, landowners. Chaired by Henry Holroyd, the Third Earl of Sheffield and once a Member of Parliament for the Conservative Party, the 20⅓-mile-long line was to be double-track throughout, and serve extensive estates at Sheffield Park and Newick & Chailey, the latter serving the residences of Reedens House and Newick. In total, four substantial stations were planned for the route, which passed through a sparsely populated area of rural Sussex: West Hoathly; Horsted Keynes; Fletching & Sheffield Park; Newick & Chailey. This was truly a line built for the convenience of a few select landowners, rather than local populations of villages and towns. Building of the line was started by the independent ‘’Lewes & East Grinstead Railway’’ (L&EGR), and the route was to be engineered by John Wolfe Barry, whom had earlier carried out work for the SER in 1866, on the railway bridge at Cannon Street. However, progress began to stall through lack of capital, and the company called on the LB&SCR to assist with the scheme. Whilst this may not have been a particularly profitable line for the LB&SCR to eventually operate, the company was desperate to avoid the SER becoming involved, perhaps in the aim of resurrecting its plans of 1866 for a line to Brighton. The L&EGR was formally vested into the LB&SCR on 17th June 1878, the latter assuming the construction task. By this time, two further stations had been added to the list: New Barcombe and Kingscote. Facilities at the intermediate stations were undoubtedly generous, particularly in light of the traffic levels the route later saw, but economical measures were indeed made. The decision was taken not to lay double-track between Horsted Keynes and what became Culver Junction (south of New Barcombe), but infrastructure, such as the track bed and bridges, would nevertheless be built to this profile to accommodate it, should a second line later be required. Completion of building works came in July 1882, and on 21st of that month, the line and stations were inspected to ensure the infrastructure was constructed to the required standard before the route was opened to passenger traffic. The first passenger services ran on 1st August of that year, and the line became known colloquially as the ‘’Bluebell & Primrose’’.

Of the stations upon the route, that at Horsted Keynes, located a mile to the north west of the village from which it took its name, was by far the most extensive. The site was worthy of a place on the main Brighton trunk line, rather than upon a countryside route built for use by a select few. Two islands and one side platform, making a total of five platform faces, were in evidence from the outset. Generous platform provision had been made here partly because Horsted Keynes marked the commencement of the double-track section to East Grinstead, but also in light of an impending branch from here to Haywards Heath, on the Brighton Line. The three-mile double-track line opened on 3rd September 1883, and diverged from the existing line to Fletching & Sheffield Park at the southern end of Horsted Keynes – crossovers between the two routes were also present immediately north of the platforms. One intermediate station was provided at Ardingly, and the northern section of the Bluebell & Primrose became a useful diversionary route to Brighton – the advent of the Ardingly branch at least meant that diverted services could avoid taking a circuitous route through Lewes, to reach the coastal resort.

Track Plan of the current layout at Horsted Keynes. Click the above image for the full size version. Please note that this is a large drawing of 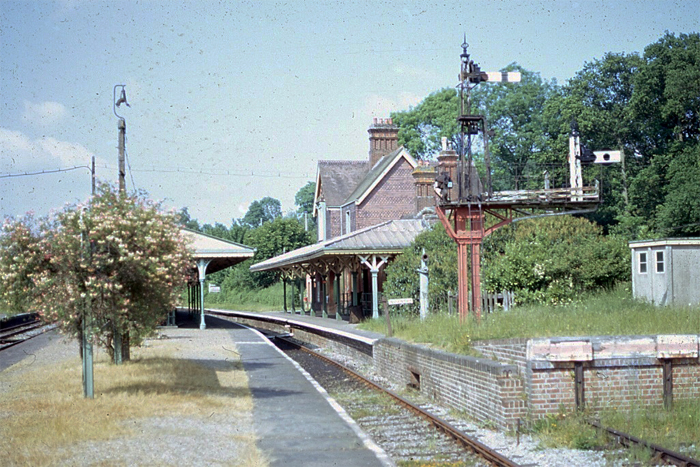 A northward view in 1967 shows the station to still be in fine fettle, the last BR train having left for Haywards Heath on 28th October 1963. The grass and shrubbery had for long been features of the platforms. The starting signals on the right-hand side were for the branch to Sheffield Park and had replaced an earlier timber-built arrangement. © David Glasspool Collection 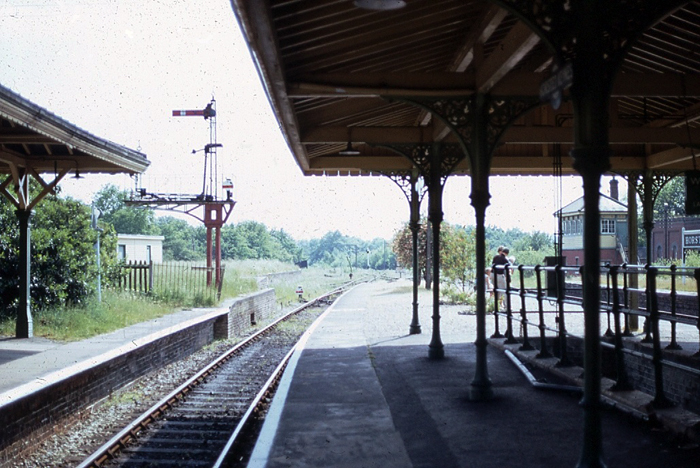 The fine ironwork of the island canopy's brackets can be appreciated in this southward view, which includes the ''dock'' line and starting signals seen in the previous photograph, in addition to the railings surrounding the subway entrance and the signal box. © David Glasspool Collection 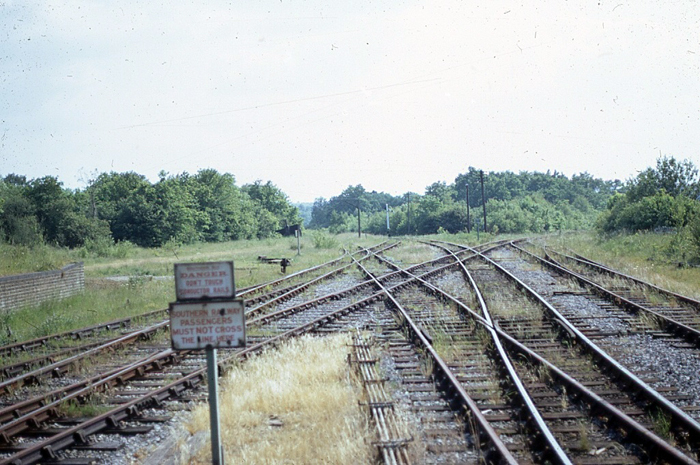 A southward view from what was originally the ''down'' island platform shows the former route to Lewes via Sheffield Park and Barcombe curving off to the left, whilst the branch which once led to Haywards Heath via Ardingly swings to the right. Of interest are the signs at the end of the platform, both dating from Southern Railway days; that on top warns about the third rail, which had gone by this time. © David Glasspool Collection