This was an interesting hybrid formation, which was part of the development programme for the Trans Manche Super Train (TMST) Channel Tunnel stock. On 18th December 1989, an order was placed with GEC-Alsthom for the construction of thirty TGV-style electric train sets, each twenty vehicles long, designed to operate from London to Paris and Brussels. These sets would take current from overhead wires rated at 25 kV through the Channel Tunnel and in France, and 3 kV in Belgium. However, on the British side of the operation, the trains would be traversing existing domestic lines equipped only with 750 Volts DC third rail.

In May 1989, Class 33 No. 33115 was withdrawn from service with a seized engine, but by June it had been dispatched to Doncaster for conversion into a Driving Van Trailer (DVT) in connection with TMST development. In the following year it emerged from Doncaster Works in InterCity "Executive" livery and had been renumbered 83301. The locomotive now sat upon TGV-type bogies, these of which were equipped with third rail pick-up shoes. It also kept its seized engine as a dead weight and latterly, branding which read "Test Vehicle For International Services" in capital letters, was added to the lower body sides.

At the same time Class 73 No. 73205 "London Chamber of Commerce", part of the pool of locomotives used for the Gatwick Express, was selected to pair with No. 83301. The two were semi-permanently coupled together, their raison d'être being to test the combination of TGV bogies and third rail pick-up gear at speeds of up to 90 MPH. Whilst No. 73205 was selected as the source of propulsion, power from the third rail came via the pick-up shoes of DVT No. 83301. 4TC (Class 438) set No. 8007 completed the ensemble: this four-car unit had been made obsolete in 1988 by the Bournemouth to Weymouth electrification and had subsequently been taken on by the Railway Technical Centre (RTC) at Derby. For this role, it was repainted into RTC red and blue.

The test train ran mostly between Waterloo and Eastleigh, but a South Eastern Division working for the set operated between Stewarts Lane and Dover Western Docks. For the latter, a Derby RTC-allocated Class 47/9 was attached to the formation. By summer 1991, two more Mk 1 vehicles had been added to the set, these being Network SouthEast-painted BR Mk 1s, again from ex-4TC stock. Over 6th/7th June 1992, both Nos. 83301 and 73205 appeared at the "Ashford 150" event at Chart Leacon Depot.

The first completed Trans Manche Super Train arrived in Britain via the Channel Tunnel on 20th June 1993 and on 14th November of the following year, "Eurostar" services from Waterloo International to Paris and Brussels commenced. Naturally, this brought to a close third rail pick-up testing and in 1994, No. 83301 was donated to the "Class 33/1 Preservation Group". The locomotive was moved to St Leonards Depot, where it was stripped for parts and, in summer 1996, the body shell cut up, most of the remnants having been removed from the site by the autumn. The bogies were not part of the deal and were subsequently returned to the RTC. As for No. 73205, it was returned to the dedicated Gatwick Express locomotive pool. This Electro-Diesel is still with us today, now being in service with "Great Britain Railfreight" (GBRf). 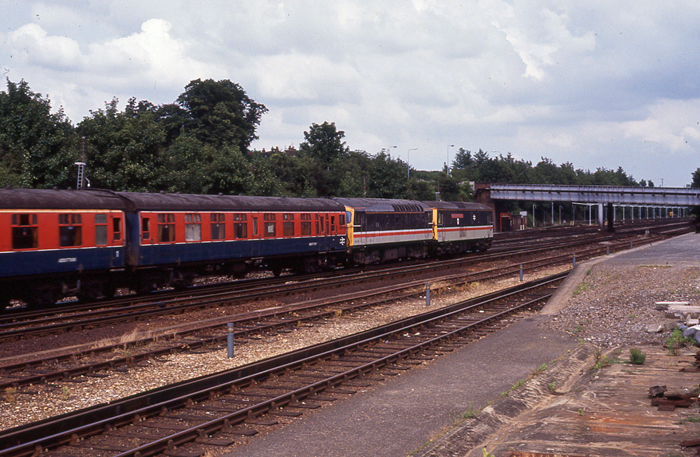 Both wearing InterCity "Executive" livery, Nos. 73205 "London Chamber of Commerce" and 83301 (ex-33115) are seen at Basingstoke fronting 4TC unit No. 8007, London-bound, on one of numerous test runs. © David Glasspool Collection 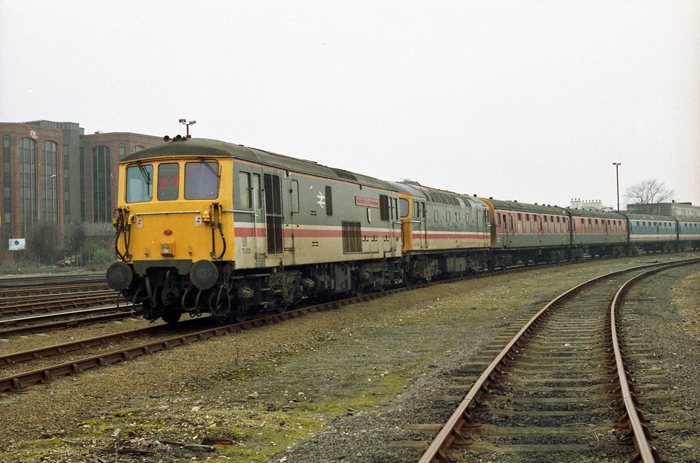 Now looking somewhat grubby, the test train is seen parked in the yard at Eastleigh, the chimney pots of the station building just being visible in the background, above the carriages. By this time, the formation had gained a pair of ex-4TC BR Mk 1 vehicles painted in Network SouthEast livery, and No. 83301 displayed the "Test Vehicle For International Services" legend. © David Glasspool Collection