This was a fairly sizeable ensemble of sidings, situated on the eastern side of the Thames Tunnels' southern portals, about ⅔-mile northwest of the Ebbsfleet International station construction site. The yard's primary role was to harbour those infrastructure trains used in connection with track laying at Ebbsfleet. This formally commenced on 10th May 2004, the first of these rails being laid on the elevated spur which would eventually connect the CTRL (High Speed 1) with the North Kent Line.

Closure of Kent Portal Yard occurred in 2006, track laying on Section 2 of the CTRL being completed in November of that year. The sidings, which stretched for 600-metres (656-yards) beside the tunnel approaches, were swiftly lifted and a large proportion of the site was subsequently cordoned off with palisade fencing.

Click the above for a larger version. © David Glasspool 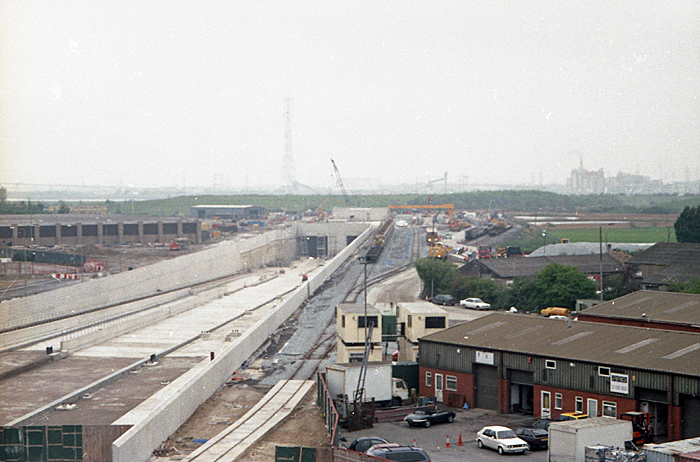 A view looking northwest shows the completed approaches to the Thames Tunnels, immediately before track laying. Kent Portal Yard can seen on the right-hand side of these. © David Glasspool 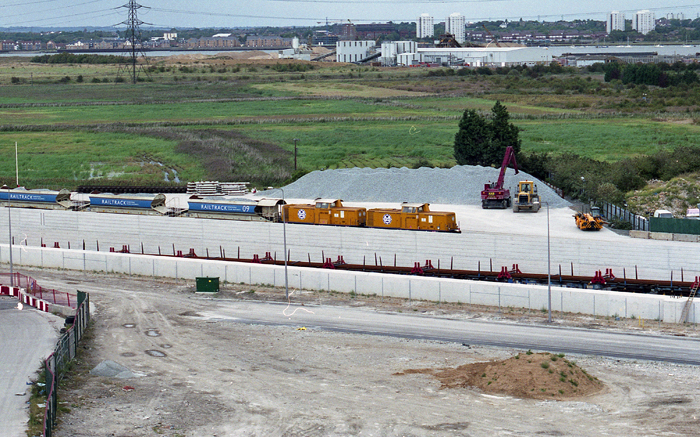 Two visitors from France are seen fronting a ballast train in the yard. On the continent, these are known as Class 212 diesel shunters, and the "TSO" stands for "Travaux du Sud-Ouest" ("Work of the South West"). The concrete retaining walls of the Thames Tunnels' approaches are seen in front of the locomotives; track laying had by this time started at the portals. © David Glasspool