North West Kent has an illustrious and varied industrial history, if not a somewhat complicated one. Of those cement-producing complexes which established themselves along the bank of the Thames between Dartford and Greenhithe, the Kent Works was the most recent. The Kent Portland Cement Company hired contractors P & W Anderson Ltd, just after World War I, to construct a large facility, sandwiched in-between the Thames and the SE&CR’s North Kent Line in the Dartford Parish of Stone. P & W Anderson had been involved in a number of industrial and railway projects. Notably, when construction of the Kent Portland Cement Works was completed in 1922, the company entered into another contract on 25th May of that year, this time with the ‘’North Devon & Cornwall Junction Light Railway’’. The building contractors had been called upon by this concern to construct a twenty mile-long Standard Gauge line between Torrington and Halwill. Colonel Stephens oversaw the construction of the route, the northern third of which re-used the track bed of a 3’ china clay-carrying industrial line, and the railway opened on 27th July 1925, being worked by the LSWR from the outset.

The main bulk of the Kent Works covered an area of approximately 945,000 square feet to the north east of the 1908-opened Stone Crossing Halt, but it was by no means the largest in the vicinity. The earlier 1877-opened Johnson Works, its easterly neighbour, covered an enormous area south of the North Kent Line, within the Parish of Greenhithe. The Kent Works, which took a three year period to fully complete, was operated under ‘’Kent Portland Cement Company’’ auspices until only 1923: in this year, both the concern and the works were absorbed into the larger Associated Portland Cement Manufacturers (APCM) organisation. In brief, the APCM had first emerged during 1900, after the amalgamation of thirty independent cement manufacturing concerns, the majority of which were based along the Thames and Medway Estuaries. The formation of APCM was followed in 1911 by the emergence of the British Portland Cement Manufacturers (BPCM), which was the fusion of no less than thirty-three independent concerns. However, the latter were nationwide, and not just exclusive to North West Kent. It was BPCM which the larger Johnson Works of Greenhithe became part of. The two organisations were, behind the scenes, connected, with APCM having an 80% shareholding in its BPCM counterpart, but the pair still operated as separate entities.

Although the Kent Works was on the bank of the Thames, chalk pit operations were instead started to the south of the North Kent Line. To connect the pits with the various sections of the cement works, a maze of Standard Gauge lines were in evidence from the outset, complete with locomotives. The latter were second-hand, having been built for contractors P & W Anderson around the turn of the century for earlier projects. The firm had subcontracted such work to a pair of Leeds-based concerns: Manning Wardle and Hudswell Clarke. Manning Wardle specialised in building steam locomotives destined for industrial and contract use. Hudswell Clarke’s locomotive range was of a similar ilk, although the company was not just in the railway game; rather, it was a general engineering firm. Four small tank engine locomotives, two from each company, were used by P & W Anderson during construction of the Kent Works, and these subsequently stayed on to work the rails here once building work had been completed. The contractors tunnelled under the SE&CR’s route just to the west of Stone Crossing Halt’s platforms, which permitted the insertion of a single-track line to connect the works with its first chalk pit excavations. The tunnelling exercise also allowed an immediate rail connection to be made with the adjacent 1885-begun Stone Court Chalk Works (more of later). In review, there were three operational cement works by 1922, which were all linked to each other by a Standard Gauge industrial railway:

The trio were also linked to the aforementioned Stone Court Chalk Works, and all cement operations had direct connections with the SE&CR’s North Kent Line. With reference to Stone Court, the operation’s raison d’être was purely to quarry and supply chalk for the cement industry, rather than to produce the final product itself. To the immediate south of the North Kent, opposite the Kent Works’ ‘’tunnel’’ underneath the SE&CR route, laid an area of land measuring some 550 yards down, by about 700 yards across, bordered at both its north and south ends by roads. Initially, the upper 380 yards of the land was occupied for its full width by two operations: the western ⅝ of the area was used by the Stone Court Chalk Works, whilst the remaining eastern portion became a large chalk excavation for Kent Works. The latter company had also opened a chalk pit some ⅔-mile to the west of this, it still remaining south of the SE&CR’s metals. Naturally, the cement maker’s domestic network stretched this far out, passing through two tunnels to reach the western-most excavation – this is later illustrated in diagram form. By 1938, the Kent Works had extended its nearest chalk pit for the remaining 170 yards southwards, meeting ‘’London Road’’. However, the obstacle of the elevated road was later overcome, and by 1960, a further pit south of this had been opened; the domestic railway line had once again been tunnelled through the soft chalk terrain. 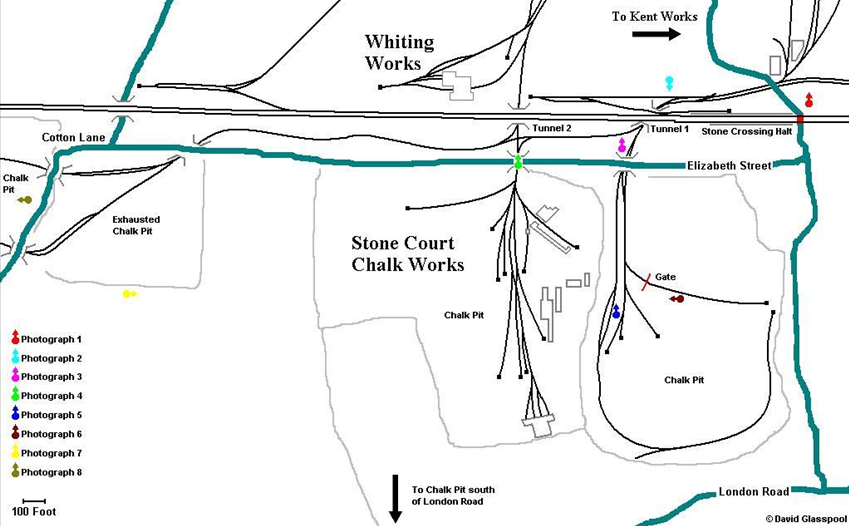 The above diagram is a guide to this complicated railway system, and indicates where pictures have been taken from, using arrows to indicate the direction being faced. Click the diagram for a larger view. Drawn by David Glasspool 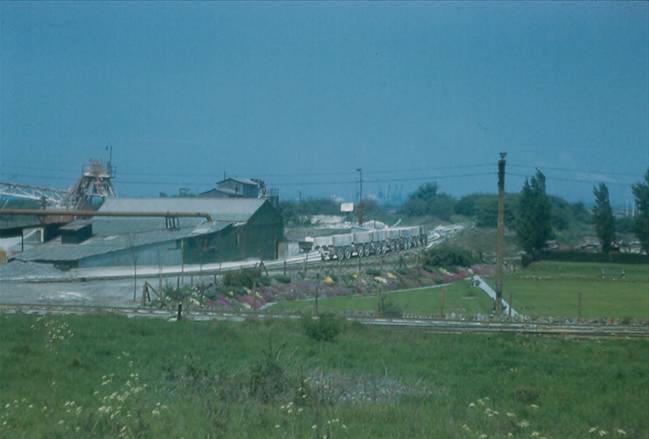 Photograph 1: Conveyance apparatus and chalk deposits are clearly in evidence in this northward view. The double track in the foreground is not that of the North Kent Line, but is instead the Kent Works' internal Standard Gauge network - the commuter route is behind the camera. Of note is the garden area of the main office, observed emerging from the right and sitting within the diverging tracks. In the centre of the picture, on the curve, can be seen a line of seven timber-built tipping wagons. Their white colour is not the product of a paint coat, but rather that of chalk dust. These wagons were of an interesting breed, featuring somewhat oversized-looking wheels. The wheels themselves were not plain solid types, but instead demonstrated spokes. The wagons were brakeless, wooden blocks being wedged in beside wheels to hold rolling stock still. © David Glasspool Collection 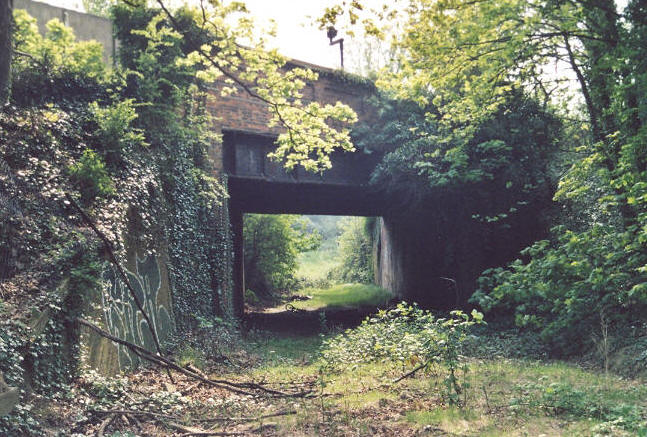 Photograph 2: In the previous picture, we were east of Stone Crossing Halt's platforms and looking north. In this second view, we have moved to the western end of the station and now have a southward heading, but we remain north of the railway. In view is what is marked on the diagram as ''Tunnel 1''. This took the Kent Works' rails under the SE&CR's route to the west of Stone Crossing Halt. Of course, the platforms were subsequently extended by BR over the tunnel, and the prefabricated concrete backing can be seen at the top left. Despite the ''Crossways Business Park'' development and the rapid office and warehouse emergence in the immediate environs in the last ten years, remarkably the track bed here still exists for a short distance behind the camera, and beyond the tunnel. © David Glasspool