The ‘’Lewes & East Grinstead Railway’’ Bill was deposited to Parliament on 30th November 1876, promoting the construction of a double-track line between the mentioned towns. The Bill received Royal Assent on 10th August 1877 and enshrined within it were the building of four stations: West Hoathly; Horsted Keynes; Fletching & Sheffield Park; and Newick & Chailey. This was a line proposed purely in the interest of a few local landowners, who required a railway to serve their extensive rural estates. The independent company soon found itself without the necessary finance to complete the route and as a consequence, the LB&SCR was invited to take over the project. This it formally did on 17th June 1878, and it appears that at this time, two more stations were added the list: New Barcombe and Kingscote. The line was completed in 1882; on 21st July of that year, all stations were inspected for fitness of use, and on the 1st of the following month, passenger traffic commenced.

Kingscote was a station typical of the route – indeed, at all sites along the Bluebell & Primrose Line, architectural features were standardised. Two platform surfaces, each 420-foot in length, came into use around a 39-chain curved double-track. Horsted Keynes and Kingscote stations were the only sites along the line to be fitted out with subways; enclosed footbridges came into use at all other locations except for New Barcombe, where only a single platform surface had been commissioned from the outset. Both platforms at Kingscote were equipped with ornate hipped roof canopies. The ''down'' side canopy was 170-foot in length and was supported at its rear by a timber framework, which incorporated a 70-foot long waiting shelter, in addition to a series of wooden stanchions. The ‘’up’’ side canopy was a shorter affair, measuring just over 100-feet in length, and at its rear backed onto the main station building. The latter was an impressive affair, but by no means unique: it comprised a main two-storey-high section, which housed the Station Master’s accommodation, and this was flanked on either side by single-storey appendices, one of which contained the booking office. The main building’s upper floor was finished externally with timber beams and plaster in-fill, but vertically-hung clay tiles were later added within the triangular pitched roof sections.

Goods facilities here were concentrated on the ‘’up’’ side and five sidings terminated behind the northern end of the platform surface. Three of these served a separate platform surface dedicated to the loading of livestock into wagons, and this was a feature of all stations along the route. Adjacent to these sidings was a small goods shed; this was a standalone structure that lacked a rail connection. There is little doubt that much goods traffic, at least in the earliest years, was generated from the nearby saw mill and timber yard, which shared the same site as the goods yard.

Finally, on the ‘’down’’ side of the running lines, north of the platforms, existed a single southward-facing refuge siding, just under 200-yards in length. One of the LB&SCR's signal cabins emerged at the northern end of the ‘’down’’ platform. This was a substantial structure, particularly in light of the station’s rural location and modest layout, and was based on a design originally pioneered by Saxby & Farmer. It was a slightly smaller version of Horsted Keynes’ ‘’South Box’’, and the signalman had the convenience of a barrow crossing across the running lines at this point. This was in addition to a track foot crossing, situated midway between the platforms, for use by station staff.

From the outset, the main building was prone to water leakages through its upper floor – this was suffered by all such structures along the route, which were finished externally with the same timber and plaster panelling. Thus, around the turn of the century, this finish was partially covered over with vertically-hung clay tiling, extending down from the roof sections. Further alterations at the site took place under Southern Railway auspices. Circa 1930, the ‘’down’’ side platform canopy was truncated at its northern end by 70-feet, to match the extent of that on the ‘’up’’ side. As a result, the canopy lost its sloping roof end on its northern side, and this was replaced with a plain vertical timber valance – exactly the same occurred to the remaining island platform canopy at Horsted Keynes. An additional gas lamp was installed upon the site of the demolished canopy section. Over the subsequent five years, Kingscote became host to numerous prefabricated concrete components, manufactured at the ex-LSWR’s concrete works at Exmouth Junction. Concrete fencing was installed along the rears of both platform surfaces, and new station name boards also appeared in this material. Finally, two goods sidings were lifted, one of these having once served the cattle platform.

Not long into the British Railways era, closure for the Bluebell & Primrose Line was looming. The route had for long been a light carrier and now with dwindling goods traffic, BR advertised the withdrawal of services between Lewes and East Grinstead Low Level, via Horsted Keynes, for 13th June 1955. As a result of upcoming strike action, however, the decision was taken to close the line even earlier, on 28th May of that year, without ceremony. When Kingscote closed, the platform lampposts still wore the black and white stripes applied during World War II; regulations required lampposts and vehicle mudguards to be so treated, to assist people walking during the blackout. The line was later given a brief reprieve, when a resident of Chailey discovered that the original Act of 1878 stipulated that a daily service of at least four trains each way had to be maintained in perpetuity. BR was forced to recommence services along the line on 7th August 1956 – to formally close the route for good, the 1878 Act had to be repealed. The re-launched meagre timetable excluded stations at Barcombe and Kingscote, since these were not mentioned within the 1878 Act, and consequently, these remained out of use. The track remained in situ for a decade after closure before lifting commenced. The entire ‘’down’’ side – platform, canopy, and signal box – was razed to the ground, but thankfully, the ‘’up’’ side structures remained, not suffering the same fate as those at nearby West Hoathly.

The station site passed into the ownership of the Bluebell Railway Preservation Society (BRPS) in January 1985, as the organisation embarked on a northern extension from Horsted Keynes. The ‘’down’’ side was rebuilt from scratch: upon the platform emerged a new canopy, built to the outline of the 1882 design, but to its post-SR shortened length. The ‘’up’’ platform was lengthened and both surfaces were longer than they had been under BR, SR, and the LB&SCR. The extension opened to passenger services on 23rd April 1994.

A ground level signal cabin, again a new-build, appeared 260-yards south of the platforms and was formally commissioned on 27th April 1996 to control the run-a-round loop formation. It was joined by a second signal box, positioned at the northern end of the ‘’down’’ platform. The latter comprised a timber cabin salvaged from Brighton Upper Goods Yard, set upon a newly-built red brick base, and assembly of this structure was deemed formally complete on 30th August 1996. The salvaged signal box was for a long time a "dummy" cabin, all movements being controlled from the small timber structure at the southern end of the site.

On 23rd March 2013, the long-awaited two-mile extension from Kingscote to East Grinstead formally opened. This was signalled for colour light operation, given the shortage of spare parts for semaphore signals. This was followed on 5th February 2016 by the commissioning of Kingscote North signal box, which took over control of the station's layout from the small timber cabin to the south. 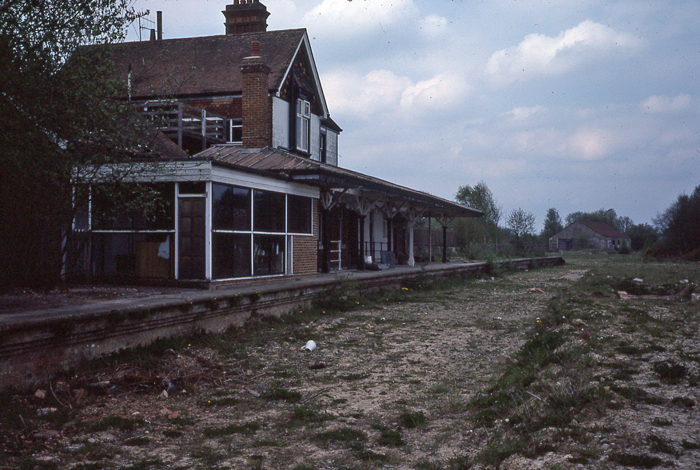 Looking in the East Grinstead direction in 1980, we can see that the "down" platform (right) was nothing more than a dishevelled mound of earth, but the former goods shed, in the background, had remained standing all this time. The main station building on the "up" side had kept its canopy, but gained a typically 1970s-design extension. A timber outdoor terrace had also been installed behind the canopy. © David Glasspool Collection 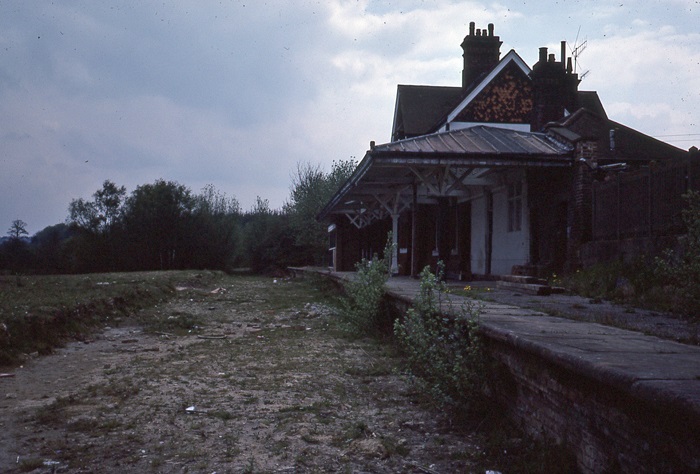 Some Southern Railway concrete fencing was still evident at the former station, on the far right. This view towards Horsted Keynes shows that the "up" canopy was in fine fettle and, bar the tree in the background, the track bed at this point was remarkably free of vegetation. © David Glasspool Collection