Today, this station serves as an important interchange point between Eurostar services from London and the European high speed rail network, allowing onward travel to those destinations not served directly by trains from Britain. Lille was one of three locations originally outlined to have a station upon a new high speed line, named LGV Nord, running from just north of the French capital, with branches to the portal of the proposed Channel Tunnel and the Belgian border.

The planned LGV Nord encompassed 333-KM (207-miles) of line, which left the existing SNCF approaches to Gare du Nord at Gonesse, 15.8-KM (9.8-miles) north of Paris. The route was seen as a necessity for Channel Tunnel operation, both to increase railway capacity between the Channel ports and the French capital and, of course, slash journey times. The double-track line, electrified with 25kV overhead wires, was approved by the French Government in October 1987 and construction began in 1989.

As mentioned previously, three stations were proposed to sit on LGV Nord. In addition to Lille, the other locations earmarked for platforms were Frethun, sitting about 3&frac14-KM (2-miles) south of the Chunnel portal, and a site near the town of Peronne in Picardy. Also, a branch from LGV Nord at Croisilles, about 150-KM (93&frac14-miles) north of Paris as the crow flies, would feed into an existing station at Arras.

The LGV station works at Lille cost 252,000,000 Francs and were wholly financed by SNCF. The site selected was 400-metres (437&frac12-yards) north of the existing SNCF Lille terminus and it was initially suggested that a travelator would provide a direct link for passengers between the two stations. Instead, an extension of the 1989-opened automatic "VAL" (Véhicule Automatique Léger) metro system was made from the SNCF terminus to the international station. Six parallel-running sub-surface tracks were laid at this stage of LGV Nord, around which two island platforms were built. The islands served the outer pairs of tracks, whilst the remaining centrally-positioned pair of lines allowed non-stop services to bypass the platforms. The platforms were linked to a "high-level" concourse by escalators, stairs, and lifts, and the site was covered by a distorted curved roof, this of which was intercepted about a third of the way from the Chunnel direction by a road. Glazed sides allowed the concourse to be subject to natural light.

Regular passenger services over LGV Nord commenced on 24th September 1993, running from Paris to Calais via the original terminus at Lille. On 6th May 1994, Waterloo International, the Channel Tunnel, and Lille Europe were formally opened, but "Eurostar" services between London, Paris, and Brussels did not commence until 14th November of that year. Eight trains to London, and an equal number from there, served Lille Europe from the outset. This was in addition to fifteen SNCF TGV services for Paris running each day in either direction, and a greater number of trains were available for locations in Southern France. The platforms adopted a peculiar numbering system, becoming Nos. 43 to 46, and these were not chronologically ordered, instead being paired by odd/even numbers. All four platforms were usable by European TGV services, but only Nos. 43 and 45 were equipped with the necessary security partitions to accommodate London services.

The original terminus became "Lille Flandres", the suffix being applied to avoid confusion with the international station. The site between both stations was reserved from the outset for redevelopment into a business/hotel complex. Opening in 1994 with Lille Europe station, this became known as the "EuraLille" and was host to high rise offices, a 200-bedroom hotel, shops, and a concert hall. It was thought that the Chunnel connection would encourage businesses based in London, Paris, and Brussels, to relocate to Lille, given that the new rail links placed it more or less in the middle of the three capitals. 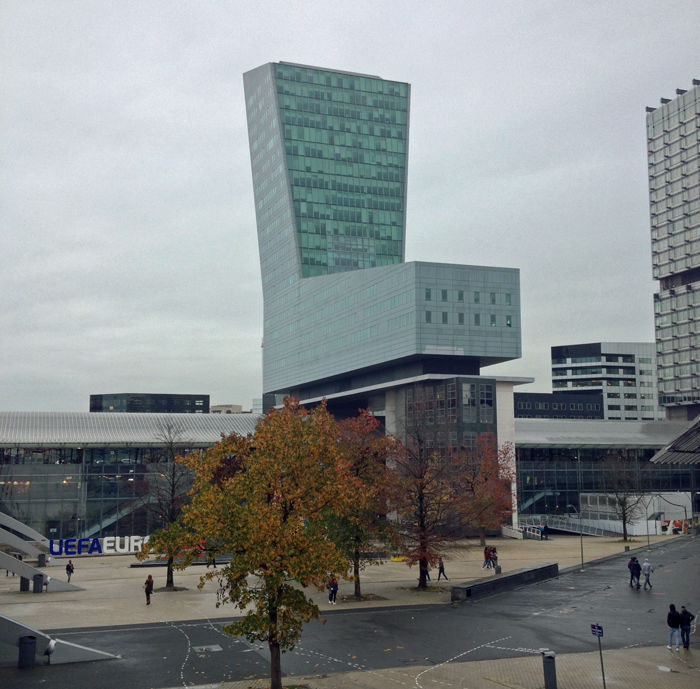 "L" for Lille and "Lyonnais". This 280-foot-high L-shaped tower was commissioned as part of the "EuraLille" development, which encompassed Lille Europe station. It was originally occupied by former French bank "Crédit Lyonnais" and was designed by French architect Christian de Portzamparc. © David Glasspool 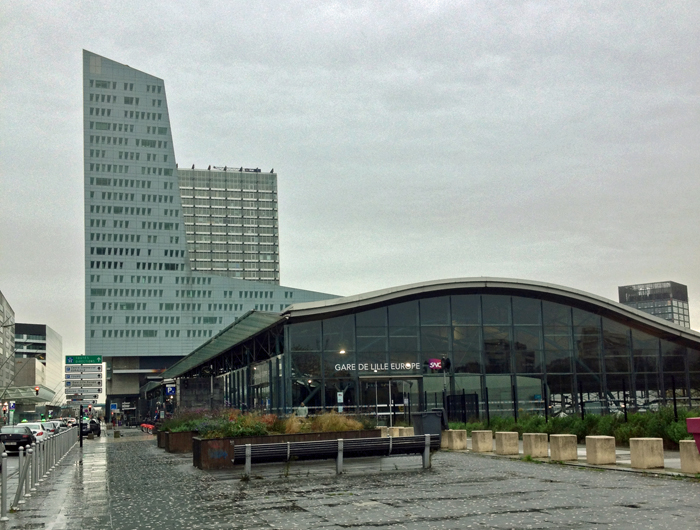 A southward view shows the distorted curved roof of the station, which is intercepted about a third of the way down by a road. A second skyscraper was incorporated into Lille Europe station, running along the site's southern edge. Designed by French architect Claude Vasconi, this can be seen behind the "L" office. © David Glasspool 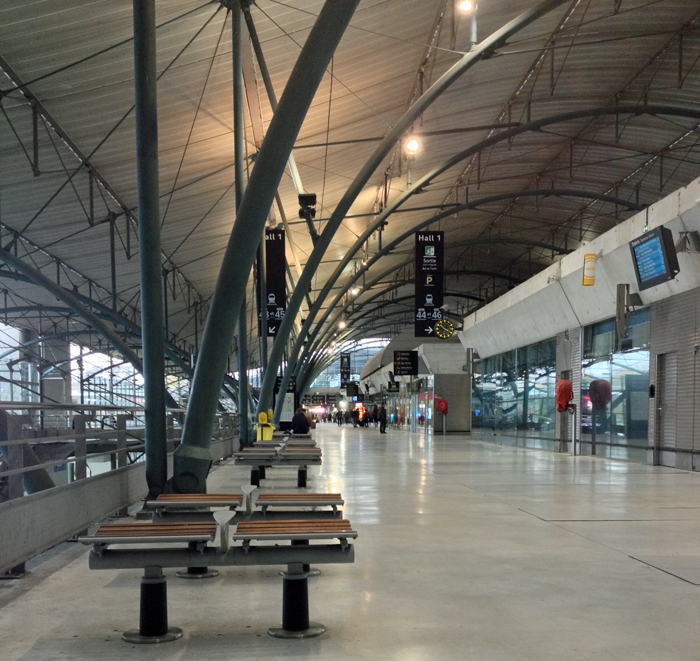 The "high-level" concourse is 275-metres-long (300-yards) and divided into four halls, numbered 1 to 4 from north to south. The concourse is renowned for being a cold, windswept location, given that the glazing which runs along the western side of the station does not extend all the way to the roof. At the far end of this northward view is the Eurostar lounge. © David Glasspool 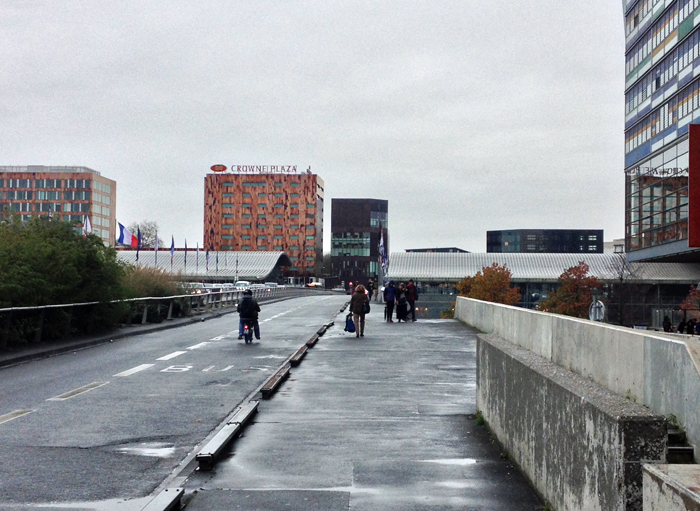 An eastward view from the direction of the town of Lille shows the aforementioned road bridge cutting through the station's roof - nevertheless, the concourse continues underneath. The SNCF terminus of Lille Flandres, behind the camera, is a 400-metre walk from Lille Europe station. © David Glasspool