On 10th May 1844, instigated by George Hudson, the Midland Counties, Birmingham & Derby Junction, and North Midland Railways amalgamated to form the ‘’Midland Railway’’. This brought important lines linking Birmingham, Derby, Rugby, Leeds, Leicester and Nottingham under a single managing committee, and progression towards the most important of them all – London – could begin in earnest. The company already had an indirect connection with the capital at Rugby, where the London & Birmingham Railway’s metals were reached. However, increasing train movements led to the inevitable overcrowding at the junction and naturally, independent access to London became somewhat more desirable. A southward extension from Leicester was begun, and on 8th May 1857, Midland Railway services reached Hitchin, Hertfordshire; thereafter, the company shared the lines of the Great Northern Railway into London. At this time, the Midland Railway was still predominantly a freight carrier, coal being the main product it conveyed. Whilst its passenger services travelled over the GNR lines into Kings Cross, its coal traffic was hauled from Rugby to Euston by the LNWR, which offered much cheaper travel tolls on this commodity than the GNR.

The use of the GNR’s lines transpired to be a rather unattractive venture for the Midland Railway; GNR services were given priority on both train paths and platform space. Furthermore, this company’s goods yard was not large enough to deal with the ever-increasing mineral traffic of the Midland and subsequently, the latter began planning its own goods depot. This was to be sandwiched in-between Regent’s Canal and the North London Line, feeding off the GNR lines which were positioned to the east of it. The GNR was only too happy to allow the Midland to build this complex: the company envisaged further toll revenues over the long-term, the Midland having no independent line to the capital. In light of this, the GNR began to throw its weight around. 1862 was the year of the Great London Exposition and for all those railway lines radiating out of the capital, there was considerable excursion traffic carried for the event. Line and platform capacity was already problematic at the Kings Cross end of the GNR system, not least as a result of sharing with the Midland, and the extra traffic each company carried for the occasion only made the whole situation worse. Consequently, additional trains had to be stabled in the GNR goods yard, only the most basic of facilities being provided for the disembarking passengers - even platforms were non-existent! Indeed, the policy of the GNR having the priority came into play, and this company demanded that the Midland used its own Agar Town goods yard, which was only partially open at this time. The Midland was not quick to react, it casting doubts over the practicality of doing this. Therefore, the company waited to be pushed, rather than jump itself, and subsequently, the GNR began removing Midland rolling stock items from its sidings. Naturally, this rattled the Midland, but the whole series of events had provided the needed impetus for the Board of Directors to initiate proceedings for an independent line and London terminus.

In the face of LNWR and GNR opposition, Royal Assent was received in 1863 for the Midland Railway to construct a 49¾-mile line from Bedford, down to the Euston Road. The latter represented the border of the Royal Commission and the Midland was fortunate enough to purchase some land off resident Lord Somers, immediately to the west of the GNR’s Kings Cross. In 1865, the Midland completed its original Agar Town goods depot alongside the GNR lines, but in the following year, the first earth was turned for the then new terminus. Even by this time, the area to the north of the Euston Road was heavily built up and the routing of the extension from Bedford would entail much demolition.

With the site of the terminus confirmed, mass destruction of houses began, their inhabitants being expelled without compensation and forced to re-settle in surrounding slums. Woeful this may have been to the residents, the Midland’s actions benefited the area as a whole, by obliterating a large area of foul and neglected housing. Demolishing slums was the least of workers’ worries: a large graveyard also required excavation. Human remains were re-buried in other cemeteries, but soon, the construction site was amassed with open coffins and bones, workers being surrounding by decomposing bodies.

Three years after the line’s authorisation, construction work actually began on the terminus. Whilst the routing of the line from Bedford was the responsibility of the Midland’s engineer William Barlow, so was the design of the terminus. Initially, this was to be akin to nearby Kings Cross, comprising of two arched spans, each 120 foot in width. The platforms were to be elevated some twenty foot above ground level - unlike the approaches to the GNR’s Kings Cross, which passed underneath the Regent’s Canal, the Midland line was routed over it. The terminus platforms could have potentially been built at a greater height above street level, but the approach lines were laid on a downward slope, thus reducing this. This elevation had a distinct advantage: it provided a huge area of storage space underneath the concourse and platform lines. This had originally been overlooked and considered more of an inconvenience when the issue first came to light. Initial suggestions proposed infilling the vast expanse with earth excavated from the construction site, but with unrivalled access to the area from street level, the storage opportunity was one too good to miss. The area was to be vaulted in construction, to maximise storage space. This decision also led to questions being raised over the original twin-span trainshed roof concept. A central supporting line of columns would be required, which would penetrate through the floor and negate the usefulness of the underground vaulted design. This, compounded by the fact that the rebuilding and re-arranging of platforms would be a future occurrence, gave rise to a new design. This more expensive idea outlined a single-span arched trainshed, 240-foot in width, which would provide unlimited flexibility for internal track layout alterations, and maintain spacious cellar space below. The design was unprecedented, but if successfully engineered, would certainly give the Midland Railway a significant presence in the capital, more so than the nearby GNR with its plain Kings Cross.

Barlow outlined the fundamental specification of the trainshed, then delegated the bulk of the framework design to engineer Roland M. Ordish, whom had a great deal of experience with using cast iron in major structures. The stage was now set: red brick walls were to line the eastern and western elevations, and a trainshed roof spanning 240-foot, with a length of 689-foot and a height above the platform lines of 100-foot, was to dominate the London skyline. The walls would have been far too weak in their present form to take the weight of the trainshed, thus the ironwork of this awe-inspiring structure was perpetuated to platform level, where it was secured in place by three-inch thick iron rods upon brick piers. The latter extended the twenty feet downwards to street level. Both north and south façades of the trainshed were to be fully glazed, as was the central longitudinal area of the roof, whilst the rest of the outer surface area was to be covered with slate tiles. The whole station weighed a staggering 6894 tons: the trainshed totalled 2894 tons; the floor plates, beams and girders some 2957 tons; and finally, the 720 cast-iron iron supporting columns underneath the platforms came to 1043 tons. This cumulative total equates to the weight of approximately forty jumbo jets. 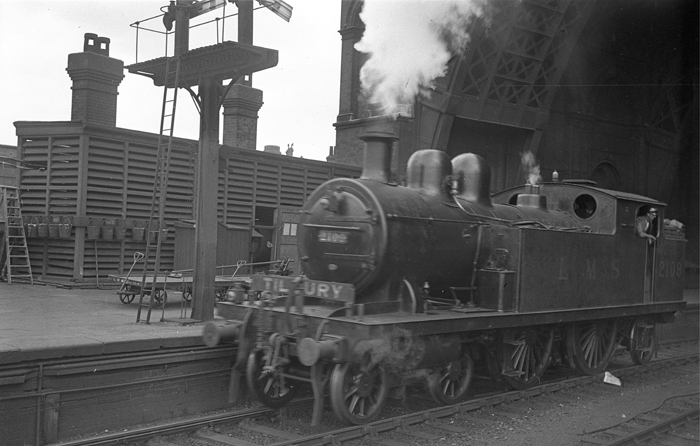 In 1912, the Midland Railway (MR) purchased the "London, Tilbury & Southend Railway" (LT&SR), the latter of which operated between Fenchurch Street and Shoeburyness. The MR became part of the London Midland & Scottish Railway (LMSR or plain LMS) at the Grouping in 1923 and it is in this company's colours we see "Tilbury Tank" Class 51 4-4-2 No. 2109 at the terminus, bearing a headboard for the Essex port. Direct trains ran from both Fenchurch Street and St Pancras to Tilbury Riverside, where passengers could transfer onto a ferry for a short trip on the Thames to Gravesend. S. H. Freese © David Glasspool Collection 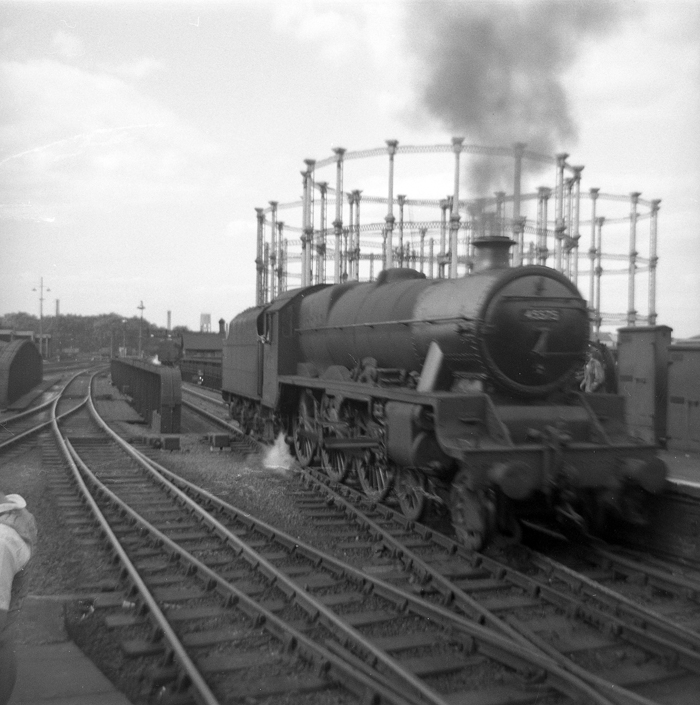 Ex-LMS "Jubilee" No. 45575 "Madras" is seen backing out of the terminus, the famous gas holders forming the backdrop. At this time, No. 45575 was allocated to Kentish Town shed (14B). © David Glasspool Collection 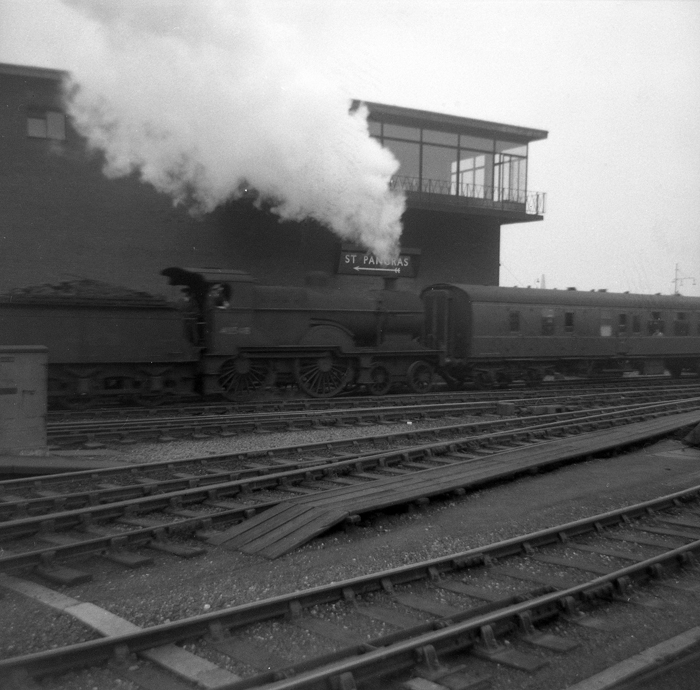 Ex-Midland Railway 2P Class No. 40548 is seen helping an express out of St Pancras, just two weeks before the engine was withdrawn from service. The signal box behind was opened in 1957, when colour light operation came into use. © David Glasspool Collection 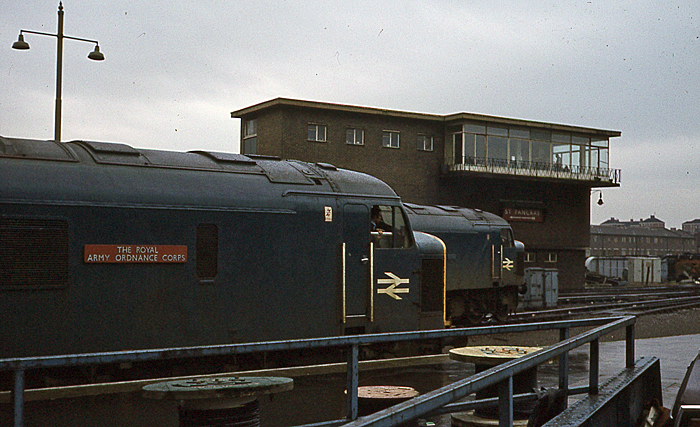 Two Class 45 "Peaks" are in evidence, the nearest being No. 45112 "The Royal Army Ordnance Corps". This locomotive had gained its TOPS number in August 1973 and was named in December of the same year. The signal box retained its red-coloured name sign at this time. © David Glasspool Collection 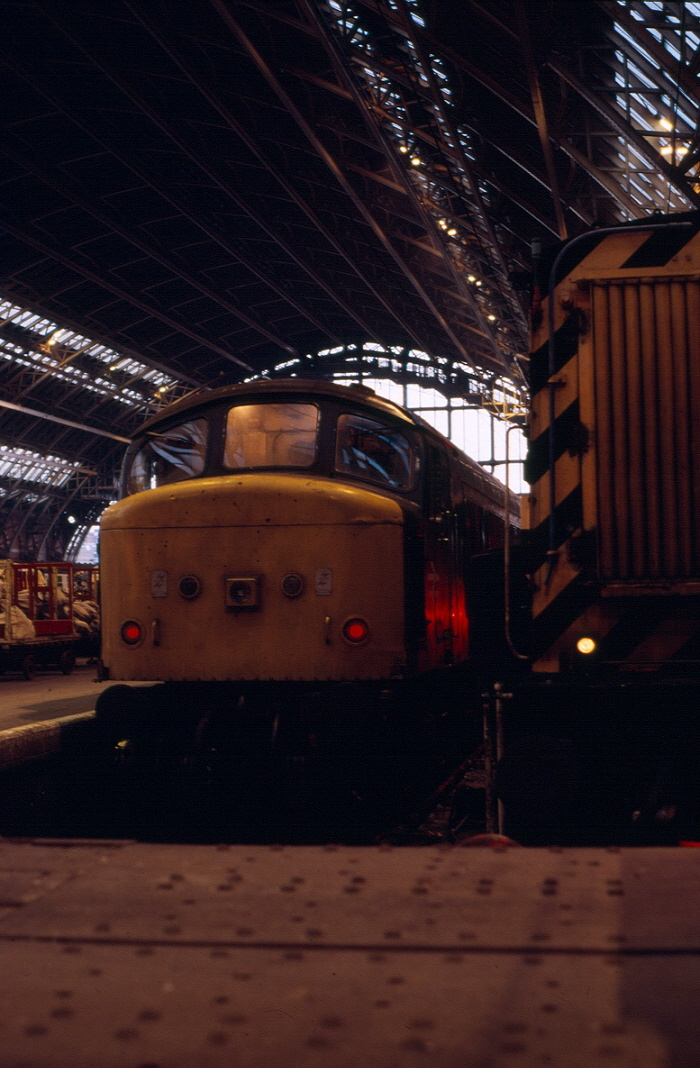 "Peak" No. 45111 "Grenadier Guardsman" is depicted at the buffer stops, alongside a Class 08 shunter and, on the left, plenty of mail bags. The locomotive was nearing the end of its British Rail career, and was taken out of service on 7th May 1987. © David Glasspool Collection