The size of St Pancras always made it seem a quiet station and indeed, the train schedules were not as intensive as those of neighbours Euston and Kings Cross. The lengthy periods of comparative tranquillity were compounded by the fact that the terminus, for quite some time, served only those long-distance services from the Midlands. The more frequent local services diverted off the extension and onto the Metropolitan Railway’s lines, passing through the tunnel under St Pancras and terminating at Moorgate. Of the long-distance trains, these were well served by four platform faces underneath the trainshed, some 800-feet in length and organised among a host of carriage sidings. At large termini such as this and the GWR’s Paddington, the area on offer was more than adequate to incorporate storage for rolling stock - this was especially true in the earliest years, with fewer trains. A fifth platform, considerably shorter than its ''main line'' counterparts, was available at the western extreme of the layout, this being used for suburban services. There were six carriage sidings in total underneath the western half of the trainshed, and at the eastern end was situated two platform faces incorporating a Hackney Carriage road in-between. Naturally, this surface area was considerably larger than that of a standard platform, being 25 foot in width. Three sidings were then abolished in the early 1890s to allow the provision of a further two platform faces. Wood instead of brick was used as a quick and cheap solution for the new faces, these again extending to 800-feet.

The signal boxes are indeed worthy of a mention. The best known example, at least from period pictures, is most probably the two-storey high all-timber cabin, positioned just beyond the end of the central platform faces. This seemed to blend well with the station, because it was also architecturally intriguing! It gave the appearance of two rectangular signal boxes having been fused together, to create one large square-based cabin, which still retained a pair of independent pitched roofs. Internally, the signal box also demonstrated the characteristic of being constituted of two separate cabins, for there were two lever frames on offer; one of which controlled the eastern side of the layout, and another which controlled the western side. These had 32 and 38 levers respectively, which had come into use in 1873, replacing a smaller cabin further north. This large structure was in the company of a second signal box from 1887 onwards: in this year, the Midland’s Somers Town goods depot opened. The size of this complex reflected the importance of freight traffic to the company, there being a mass of over thirty sidings on offer, far larger than the first depot which was beside the GNR lines. The second cabin was positioned at the apex of the junction between the station approaches and goods depot, controlling movements into and out of the huge freight complex by means of a 48-lever frame. It also controlled the station approaches at this point, before the 1873 cabin’s operational area was reached, using a second 84-lever frame.

St Pancras became a slightly busier place after the turn of the twentieth century, especially with the Midland’s acquisition of the London, Tilbury & Southend Railway in 1912, and the improvement and concentration of suburban services on the terminus. A connecting spur with the LT&SR had already been in use since 1894, with the commissioning of a link between South Tottenham and Woodgrange Park on 9th July of that year. It was a joint venture between the two companies and officially known as the ‘’Forest Gate Railway’’. Tilbury provided St Pancras with a direct connection with continental passenger boat traffic, but with the opening of the now famous docks there on 17th April 1886, there was income to be had from the lucrative goods traffic the site produced. Indeed, this fuelled the Midland’s takeover of the LT&SR in 1912. Moreover, Gravesend could now be reached via the Tilbury Ferry, but of course, this was far less important to the Midland than the freight traffic from the docks. Also operating out of St Pancras from 1870 onwards was the Great Eastern Railway, using the terminus as an additional hub for its boat traffic to the East Anglian coast. This arrangement was agreed on the terms that the Midland could have running rights over GER metals to gain access to the dockyards east of the Tower of London. The GER then reverted all its services from St Pancras, back to Liverpool Street in 1917; cost-cutting measures were required in response to World War I, which saw the inevitable reduction in services. Although these trains were not reinstated to St Pancras after the conflict, the terminus still served the continental traffic generated at Tilbury, the Midland then having full ownership of the LT&SR line.

The 1923 Grouping saw the LNWR and Midland Railway become part of the same organisation: the London Midland & Scottish Railway (LMS). This company now operated two large London termini which were no more than 450 yards apart, although of the pair, Euston would remain the more important. The Grouping aimed to amalgamate those smaller railway concerns which were virtually destitute as a result of World War I, and indeed, the largest of them all, the GWR, was the only one to survive the process. Under LMS ownership, St Pancras experienced a bout of neglect and decline. The most major case was that of the Grand Hotel, Scott’s Gothic masterpiece. When completed, the hotel was modern and completely up-to-date, incorporating luxuries in the form of hydraulic lifts, to features such as electronic bells and a revolving entrance door (the capital’s very first example). These aspects, combined with competent management, saw business thrive from the outset. However, by 1920 the complex was less of a novelty: the interior was considered dated and it lacked important contemporary facilities such as central heating, it still relying on open fires. Customers were also deterred by the sheer numbers of rooms which shared a single bathroom, or instead had servants running errands, bringing the most basic of washing apparatus to customers’ doors. Significant and expensive internal modifications would be required to remedy this and instead, the LMS decided to cut its losses and close the hotel to customers in 1935. Thereafter, it was converted into offices for the company, although the LMS headquarters remained at Euston. This entailed the crude boarding over of much of the hotel’s internal elegance, its intricate walls disappearing behind partitions, and the glamorous mosaics being carpeted over. The ‘’Midland Grand Hotel’’ subsequently became known as ‘’St Pancras Chambers’’, much of its glory now removed. 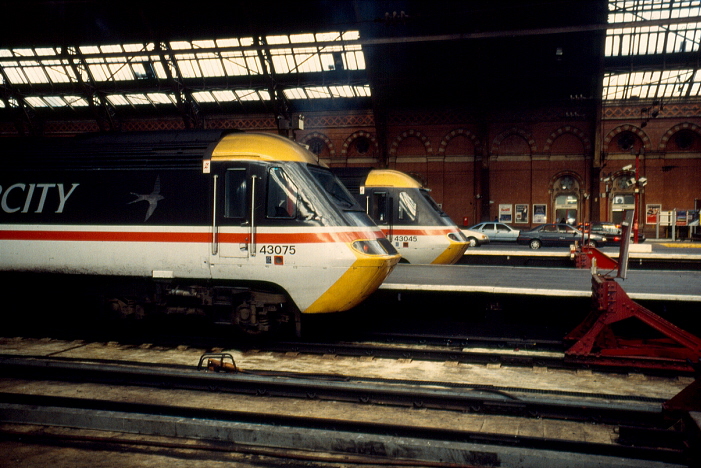 At the buffer stops are power cars Nos. 43075 and 43045, sporting the attractive InterCity "Swallow" livery. By this time, the former Hackney Carriage platform was in use as a car park. In the foreground is the third centre track, seen in the earlier 1985 view, which had been lifted by 2001. © David Glasspool Collection 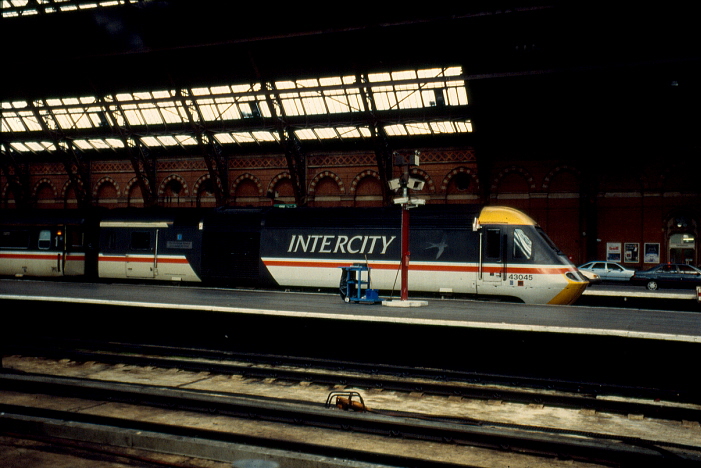 Following on from the previous view, No. 43075 has now departed, revealing a nameplate on No. 43045. This power car was at one time called "The Grammar School Doncaster AD1350" but the nameplates were removed during the locomotive's repaint into the first generation privatised livery of "Midland Mainline". © David Glasspool Collection 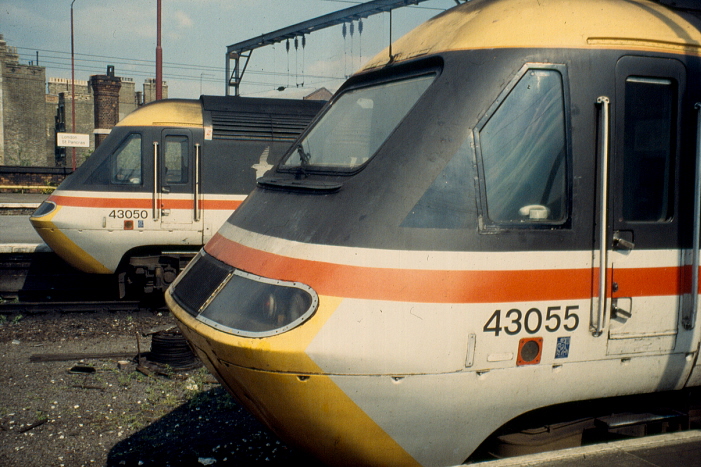 Also seen in May 1996 are power car Nos. 43055 and 43050, stabled out in the open at the platforms' northern ends. No. 43055 had been named "Sheffield Star" on 20th November 1993 at Sheffield station. The power car was latterly re-engined at Devonport Naval Dockyard, Plymouth, over November/December 2002. © David Glasspool Collection