As recounted in the Lymington Town section, a four-mile-long single-track branch from Brockenhurst was opened by the ‘’Lymington Railway Company’’ on 1st July 1858. This was worked by the LSWR from the outset, and steam ferries from the Isle of Wight docked alongside a landing stage within the Lymington River, immediately south of the Town station. This was not a convenient jetty for boats, for it required vessels to negotiate the mud banks of the meandering, shallow waters of the river’s estuary. This remained the situation for many years, since the LSWR concentrated its efforts on serving boat traffic at Portsmouth. However, the LSWR was given greater incentive to improve facilities at Lymington after the independent ‘’Lymington Railway Company’’ was vested in the former in 1878, and efforts began to provide a larger landing stage. The works involved extending the single-track line southwards from the Town station, for a distance of about 690-yards, and crossing Lymington River by means of a 220-foot-long iron bridge supported upon eighteen pillars. The latter was a low-level structure and, no doubt to the relief of the LSWR, did not require any lifting span – it was deemed that river navigation north of the railway was highly limited for tall vessels, as a result of shallow water.

The extension came into use on 1st May 1884, the first service using it being the 08:30 from Lymington Town. The ferry service to Yarmouth was operated by the ‘’Solent Steam Packet Company’’, and this concern was vested into the LSWR on 1st July 1884, the latter acquiring a fleet of paddle steamers. A completely new terminus station had been provided at the end of the line, comprising a single timber platform suspended above the water on a series of wooden piles driven into the mud. Upon the platform was a canopy of semi-circular cross-section, about 205-feet in length, comprising an iron framework clad with timber. This was built to a standard LSWR design, and a near identical canopy came into use on the ‘’up’’ island at nearby Brockenhurst. The latter was replaced during a partial rebuild of the site in 1936, but readers may be pleased to know that examples of this canopy design remain in existence at Tisbury and Barnstaple stations, to name but two. The Pier station comprised a simple run-a-round loop formation controlled by a two-storey-high all-timber signal box of LSWR design, the latter being located at the northern end of the site, opposite the platform.

Although under Southern Railway auspices, the Town station was little altered, the Pier was modified substantially. The introduction of the first car ferry in the late 1930s called for the construction of a slipway behind the platform, to permit vehicular access to vessels. At the same time, the opportunity was taken to extend the platform at its northern end, beyond the pier and onto the railway embankment, using Exmouth Junction-manufactured prefabricated concrete. As part of these works, a new canopy was erected on the lengthened surface, but the existing LSWR canopy was retained on the original section of the pier. The new canopy was an upward-sloping design hosting a simple timber valance; it comprised a metal frame fully clad at its rear with tongue-and-groove timber, to protect passengers from strong winds at this exposed location. A single northward-facing siding was laid behind the platform, leading onto the slipway, and a level crossing came into use at the northern end of the station. Worth noting is the fact that a second section of canopy, identical to the upward-sloping type mentioned, came into use on the slipway, alongside the aforementioned siding, and was not rail-served. The new slipway was commissioned on 24th May 1938.

The 1938 platform lengthening made it possible to run ten-vehicle-long through services from Waterloo to Lymington Pier in high season. Neither the Pier nor Town stations were hosts to turntables, so main line engines would run back to Brockenhurst, where a 49-foot 11-inch turntable was available. Cattle pens had been another addition during the 1938 works, these being installed beside the signal box. Further extension of the slipway took place in 1942, the cost being met by the Admiralty.

The greatest degree of layout rationalisation has, naturally, taken place under British Railways ownership, where the withdrawal of steam traction has permitted simplification of infrastructure. Modernisation commenced in 1956 when, on 11th November of that year, the LSWR cabin was replaced by a somewhat austere brick-built signal box. This was positioned about 60-yards north west of the level crossing and continued to control semaphore signals. Next came the Bournemouth electrification, approved by the Minister of Transport in September 1964, which included the installation of third rail along the branch line. The last steam-hauled train from Brockenhurst ran on 2nd April 1967 and thereafter, track layouts at both Town and Pier stations were swiftly simplified, eliminating sidings and run-a-round loops. By 1976, just half of the LSWR canopy of 1884 at the Pier was still standing. This had been cut back to accommodate new platform lighting and had been totally eliminated by 1982. It was replaced by a series of glazed bus shelters, but the SR canopy of 1938 was retained. The signal box of 1956 had a short life compared to its predecessor, being abolished in March 1968, and EMUs operated along the branch in accordance to the ‘’one engine in steam’’ regulation. Nearly six years later, in January 1976, the slipway ceased to serve the Isle of Wight Ferry, when a new terminal came into use on the eastern side of the Pier station; the level crossing was, nevertheless, retained. Later, in 1986, the station lost the last of its bygone charm when the remaining SR canopy was demolished, leaving an exposed platform surface playing host to a few glazed waiting shelters. The transformation of Lymington Pier was now complete. 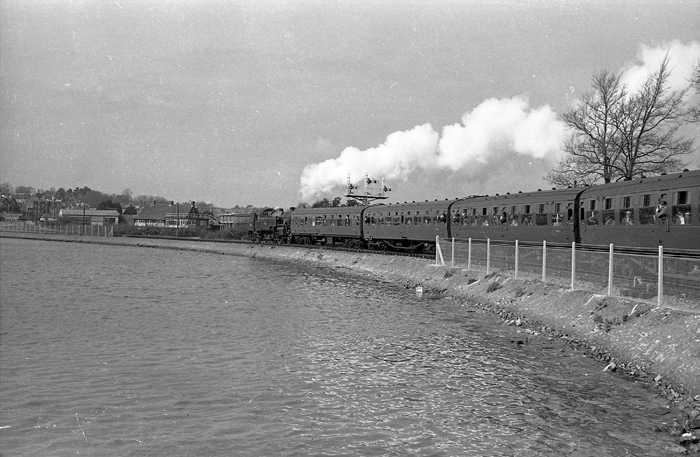 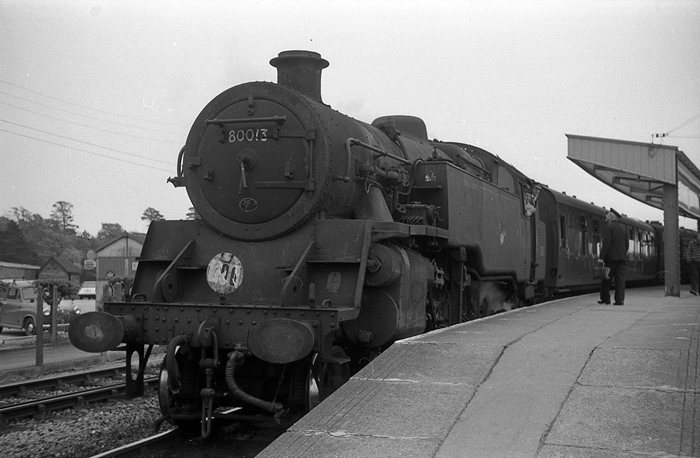 The end of steam on the line is imminent as BR Standard Tank No. 80013, shorn of a smoke box number plate, awaits departure with the return trip to Brockenhurst. The run-a-round-loop can be seen on the left. The main station name board can be seen on the extreme right, facing away from the engine, sandwiched in-between the first two canopy struts. © David Glasspool Collection 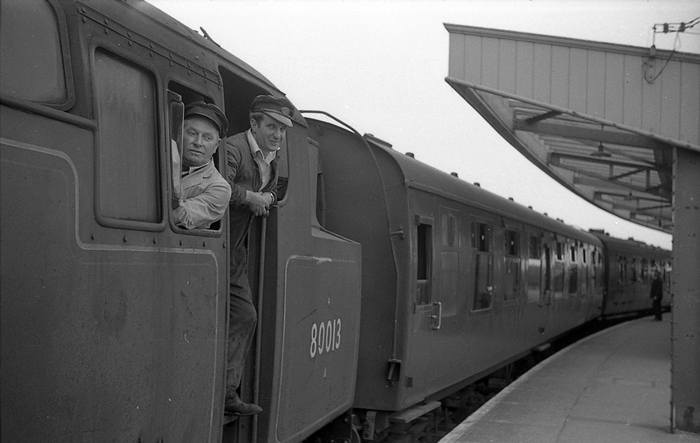 Driver and Fireman pose for the camera before setting off. In tow is a BR Mk 1, followed by a Bulleid-designed brake corridor coach. This shot shows to good effect platform curvature © David Glasspool Collection 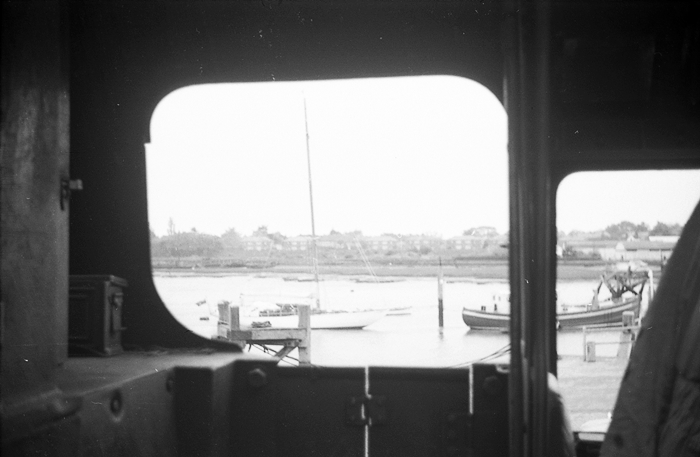 Now inside the cab of No. 80013, with the doors closed, we are afforded a bygone view over the splendid Lymington Harbour. © David Glasspool Collection