This station is merely a shadow of its former self, having been the subject of progressive degrading over the years, much of it comparatively recently. It opened later than the rest of the northern half of the Medway Valley Line, coming into use on 1st July 1874. It formed the SER's attempt to protect its Maidstone traffic from the LC&DR, which had reached the county town exactly a month previously by means of the independent ''Sevenoaks, Maidstone & Tunbridge Railway''. The rival's station was positioned closer to the town centre than the SER's Maidstone, thus the latter company was determined to level the playing field.

Barracks station merely consisted of two platform faces and a timber shelter, the latter on the ''down'' side. A footbridge was not provided here, the existing road bridge being suffice for linking the platforms. The LC&DR's route to Maidstone soon began to gather momentum and importance with the doubling of the line from Otford in August 1875, and the SER followed with enhancements to Barracks the next year by erecting a fairly sizeable single-storey tongue-and-groove timber station building on the ''up'' platform, complete with a canopy which extended to approximately double this structure's length. Although this structure did not have the grandeur which Maidstone East latterly had when the LC&DR provided a brick building at the station, straddling the tracks, it was still a pleasing classic countryside design - at least it had toilets for waiting passengers! More development occurred once again in the following year, four parallel sidings being laid on the ''down'' side, trailing off in the north eastern direction and terminating behind the platform. Two additional sidings were soon provided on the same side to serve the adjacent malt houses.

Direct electric services from London via Dartford were possible from 2nd July 1939 with the extension of third rail from Gravesend to Maidstone West. For this, the four sidings at Barracks station were electrified and provided with concrete walkways, capable of accommodating four-car EMUs. The Southern Railway rebuilt the platforms in prefabricated concrete, delivered from its works at Exmouth Junction, but little else at this intriguing station changed. The 12th June 1961 saw the remaining half of the Medway Valley Line between Maidstone West and Paddock Wood electrified, but this also marked a time when those stations on the northern half of the route, which had already received the ''juice'' in 1939, acquire completely new features, or replacements. Cuxton received a pressed-steel footbridge, but although Barracks did not require such a structure, it did see a replacement of the wooden staircases leading down from the road bridge. The then new equivalents were of prefabricated concrete construction. The aforementioned industrial sidings here also went out of use around this time.

In the early 1980s, the main canopy on the ''up'' side was truncated, it subsequently stretching only the width of the timber station building. The EMU sidings went out of use just before this occurred, but further station reductions were still yet to occur. The most major of these took place in 1991 when both the delightful ''up'' tongue-and-groove building and ''down'' waiting shelter were demolished, subsequently being replaced by far more inferior accommodation: the dreaded bus shelter. Thereafter, no ticket issuing or proper passenger facilities were in evidence at Barracks and a single semaphore signal, located at the northern end of the ''up'' platform, broke the boredom for waiting passengers. This was until its own removal in October 2005 as the whole Medway Valley Line switched to colour aspect light control. 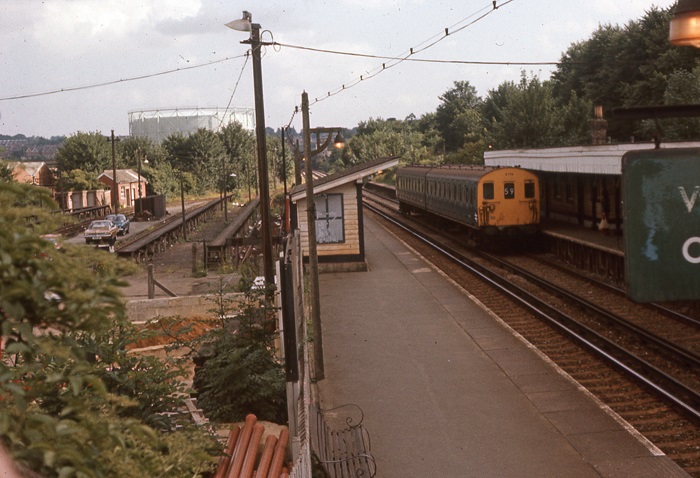 This southward view shows 2 EPB No. 5774 entering the station forming a Sevenoaks to Strood service. Note on the left the EMU stabling sidings, which received third rail in 1939 as part of the electrification scheme to Gillingham and Maidstone. Working electric lights upon BR(S) concrete bracket lampposts are in evidence, as are the SER timber platform buildings. Note that the "Way Out" sign, just creeping in on the right, is still in traditional green. © David Glasspool Collection 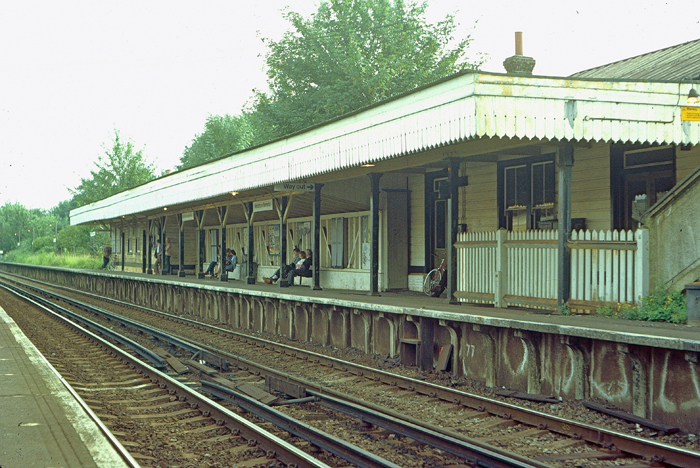 A view of the Strood-bound platform shows the SER main building of 1876, which was equipped with a generous 170-foot-long canopy. Note the downward-sloping ceiling within the central portion of the canopy, sandwiched in-between the tongue-and-groove timber offices. This structure was razed to the ground in 1991. © Tom Burnham

A northward view reveals the Southern Railway-built platforms, the bus shelters which replaced the SER buildings and, in the distance beyond the road bridge, the span carrying the Maidstone East line. The brick stacks on the right are positioned on the former site of the EMU sidings. © David Glasspool