Work on Fawkham Junction had begun on 5th October 1998, which involved lifting the remaining rails of the long-closed Gravesend West branch and excavating a new track bed. Probably the greatest engineering feat of what became ''Section One'' of the Channel Tunnel Rail Link, was the Medway Viaduct. Section One formed the backbone of the dedicated high speed line through Kent, stretching approximately 45 miles between the ''Chatham'' main line at Longfield and the tunnel portal. Construction of the viaduct initiated later than the aforementioned junction, instead beginning in the year 1999 to ensue concurrent with the widening of the parallel-running M2 Motorway. Fabricated from concrete, the viaduct runs for about ¾ mile across the Medway valley carrying a double-track - this and the widened road viaducts made use of 3,050 cubic metres of concrete between them. The approaches of the viaduct from the north westerly direction (therefore, for continent-bound trains) are permitted for 270 Km/h running (162 MPH), this speed being perpetuated over the Medway until the opposite embankment of the river, where the restriction is alleviated further for a 300 Km/h limit (180 MPH).

The viaduct's structure was complete by the end of 2002, and high speed test running of the Trans Manche Super Trains began in July of the following year. An important date in the history books for this line is 30th July 2003. On this date, the country's new rail speed record of 208 MPH was reached, this being attained on the section across the viaduct. This same date also marks the official opening of the parallel-running widened viaducts of the M2, which formed part of a ten mile-long widening programme emanating from the A2 / M2 junction. The opening of ''Section One'' to regular traffic occurred on 28th September 2003. It is interesting to note that on the northern bank of the Medway, there are now three separate routes in very close proximity, all built by different companies. The first on the scene was the extension of the Medway Valley Line from Maidstone West to Strood, completed by the SER in 1856, followed by the LC&DR ''Chatham'' main line, through running to London commencing for the latter in 1860. ''Union Railways'' built the double-track ''Section One'' of the Channel Tunnel Rail Link. 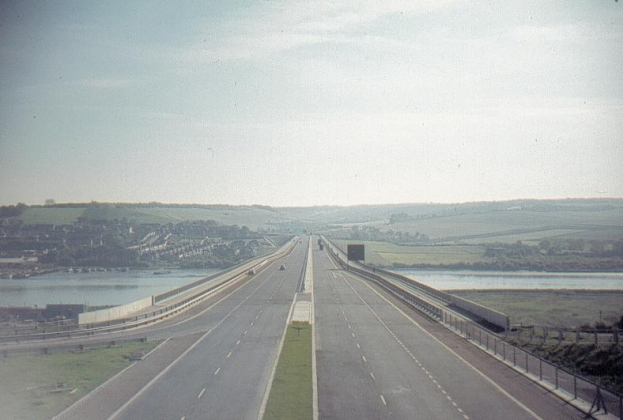 Derek Chard has very kindly submitted this picture for inclusion on the website. Taken by his father, it depicts the Medway Viaduct not long after its 1965 opening, looking south east. Before the M2 was opened, traffic used to be confined to the old A2 through the Medway towns. Even back in the 1960s, this was a considerable bottleneck and one could be held up in traffic for, quite literally, hours. © Derek Chard 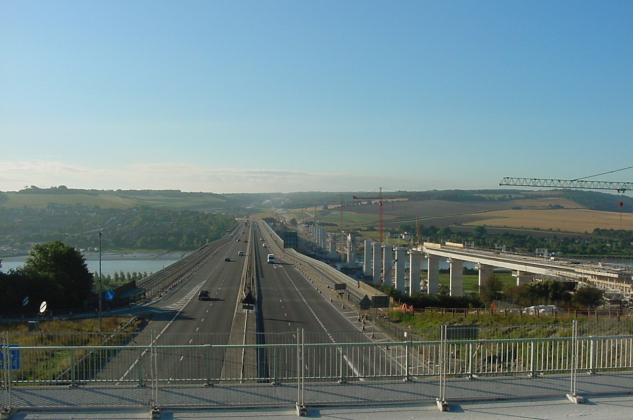 We now fast forward to 2000, looking from a similar viewpoint. The road bridge presents a virtually identical appearance, but construction of a new structure is in full swing on the right. This is the new high speed railway viaduct, and this view shows to good effect how high up the viaducts are. To coincide with these works, significant road improvements materialised in the form of a second road viaduct, positioned to the north of the existing one. This provided a much improved eight lane (four each way) trunk road at this point. © Derek Chard 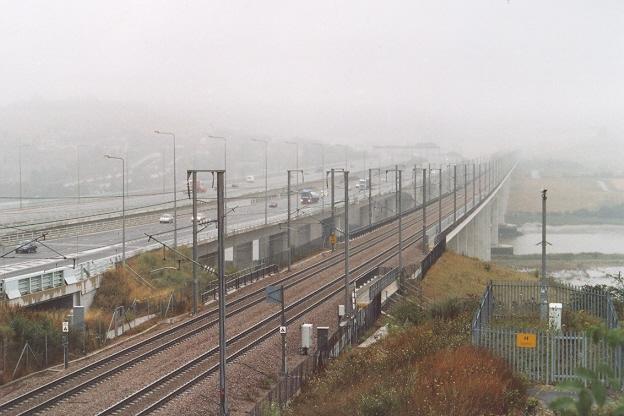 The 27th July 2005 was a very murky day, as this view of the Medway Viaduct from the northern bank of the river shows. The ''Chatham'' line passes under this structure in the foreground, where the railings of the underpass can be seen. © David Glasspool 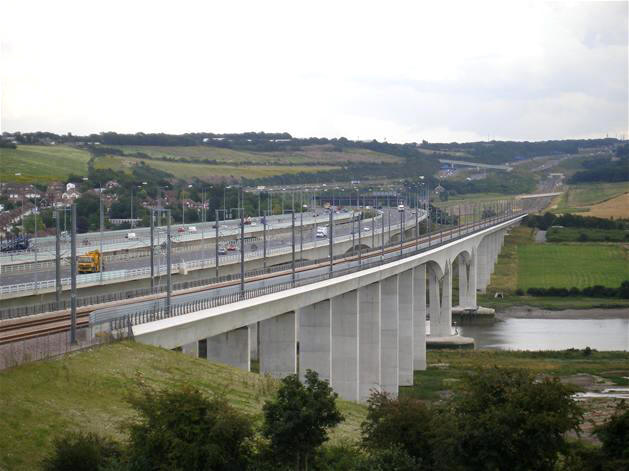 The viaduct is seen again, this time in better weather, which clearly shows the supporting structure of the track bed. In the background can be seen a significant gradient, on the approach to the North Downs Tunnel. © David Glasspool