In conjunction with the Waterloo International terminal project, it was deemed necessary to construct a tailor-made depot for the maintenance of the Class 373 Trans Manche Super Trains and Class 92 dual-voltage locomotives. Subsequently, an elongated area of unused land some 1½ miles long, sandwiched in-between the Great Western Main Line and Wormwood Scrubs, was earmarked for development. The land was also strategically important, for it gave direct access to both West London and North London Lines, the former of which joins with the Southern Region (hence links Waterloo) and the latter ultimately giving access to the three main North London termini: Euston, St Pancras and Kings Cross.

The individual depot project was priced at £75 million, which included two main shed buildings situated either side of the West London Line, powered by overhead wires, but with third rail in existence on the approaches. The western of the two sheds was to be located directly opposite Old Oak Common, separated only by the main line out of Paddington, and consist of six lines at a length of ¼ of a mile – long enough for a whole trainset at twenty vehicles. This was to be the general service shed, where daily maintenance would be carried out on whole train lengths, whether it be checking if all electronic systems were functioning, or washing sets and emptying toilet retention tanks. That shed located to the east of the West London Line was to be used for major repairs, but unlike the general service building, would only consist of four lines and be able to accommodate the length of one half set. One of the four lines would also feature twenty-six hydraulic jacks capable of lifting the whole weight of a Class 373 half set to a height of two metres. There were also two further significant, but much smaller buildings included in the depot plan: the Bogie Drop Shed and the Wheel Lathe Shed. The name of the former is fairly self-explanatory: it is here where bogies would be removed and refitted, by means of positioning a vehicle over a 40 foot drop and then hydraulically lowering the disconnected wheel set on the sectional piece of track (or the reverse for fitting). This shed would consist of two lines. The second shed, that of the lathe, was to be fed by a single line and house two centre lathes designed to shape trainset wheels.

Construction at the site began on 5th June 1991 and the first bolt affixed to the depot's steel framework was tightened by the British Rail Board's Chairman Sir Bob Reid. Building work took approximately one and a half years, the BRB's Chairman once again returning to the site to declare it officially open on 11th November 1992. The site was such a length that workers were apparently issued with bicycles to get from one end to the other more quickly! The depot was specifically optimised for the repair and servicing of electric traction, therefore any work on diesel traction was prohibited, because the site did not have the required environmental protection in the event of a diesel spillage. It is also worth mentioning that a second international depot was opened at Longsight in Manchester for light maintenance of short-formed Regional Class 373 formations. However, such services did not materialise and consequently, the site was sub-contracted to train builder Alsthom, which used it for commissioning new multiple units and modifying existing trains.

Since international train operations commenced from St Pancras on 14th November 2007, the maintenance and servicing operation moved from North Pole Depot to Temple Mills, in East London. The Government pledged to fund the construction of the new depot at the latter, the cost of which was estimated at £402 million. Temple Mills Depot transferred to the ownership of London & Continental Railways in return for both Waterloo International and North Pole being acquired by the Government. A week before the official opening of the CTRL's ''Section 2'' (now known as ''High Speed 1''), all stock was transferred from North Pole to Temple Mills, which left the former operating only in the capacity of general stock inspections. Heavy maintenance tasks on stock began at Temple Mills on 7th October 2007 (the depot having been formally commissioned on 2nd of that month), to allow engineers to become accustomed to the new site and its facilities. The lack of driver route knowledge of the North London Line saw the last five terminating Class 373 sets at Waterloo International move to Temple Mills Depot by a most circuitous route. The formations ran via Fawkham Junction, reversed at Southfleet Junction for access to ''Section 2'', then reversed again at Stratford International for access to the spur which leads to the new maintenance facility. It is possible that North Pole Depot could be reused for Crossrail stock maintenance, if this scheme ever gets underway. The project to build a depot at Temple Mills was met by formal Government approval in November 2004; it was initially planned for Eurostar sets to continue to use North Pole after 2007 by means of the North and West London Lines, but increased domestic movements on these routes has left too few available paths. The withdrawal decision was compounded by the fact that Eurostar also opted out of keeping Waterloo International as a secondary London terminus, original proposals suggesting the operation of approximately one third of services from there. 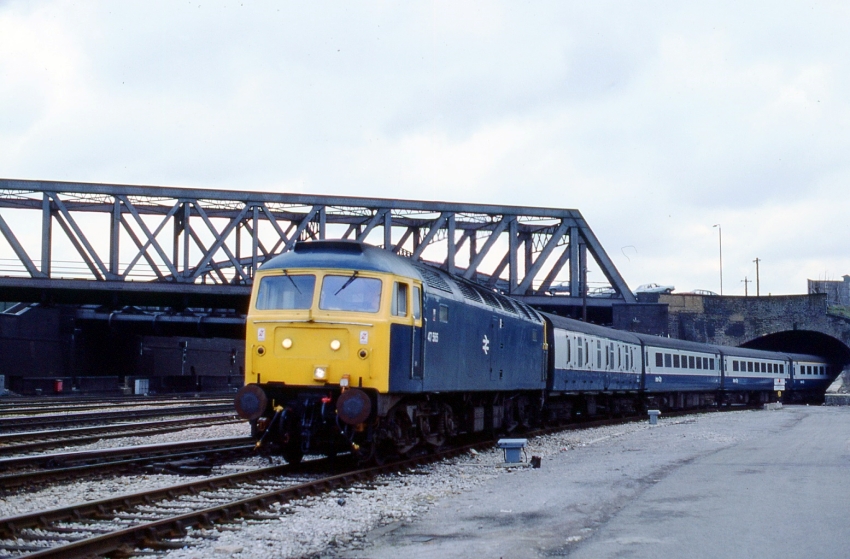 Before it was built. Class 47 No. 47565 is seen with a train of BR Mk 2 air-conditioned stock, plus Mk 1 full brake, which had originated from Gatwick Airport. The train is on the spur which connected the West London Line (WLL) via Kensington Olympia with the Great Western Main Line (GWML). The spur went out of use at the GWML end on 29th October 1990 and was diverted into the proposed North Pole Depot site. It was completely lifted in late 2013 and replaced by a road. The girder bridge in the background carries the double-track WLL over the GWML. © David Glasspool Collection 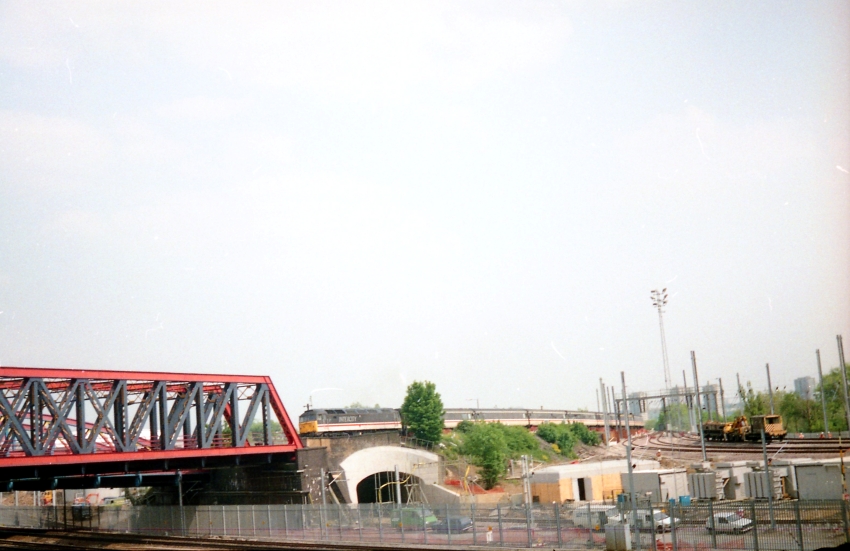 Class 47 No. 47838 is seen on the West London Line (WLL), about to pass above the Great Western Main Line (GWML) upon Mitre Bridge, forming the Brighton to Manchester InterCity Cross Country service. Compared to the previous picture, the tunnel under the WLL had received a new concrete fascia, the double-track through it had been reduced to single, and overhead wire masts were going up. The wagons and guard's van on the right were on a then new four-track incline from the western part of the depot to the WLL - by the time the tracks reached the latter, they had merged into one. © David Glasspool Collection 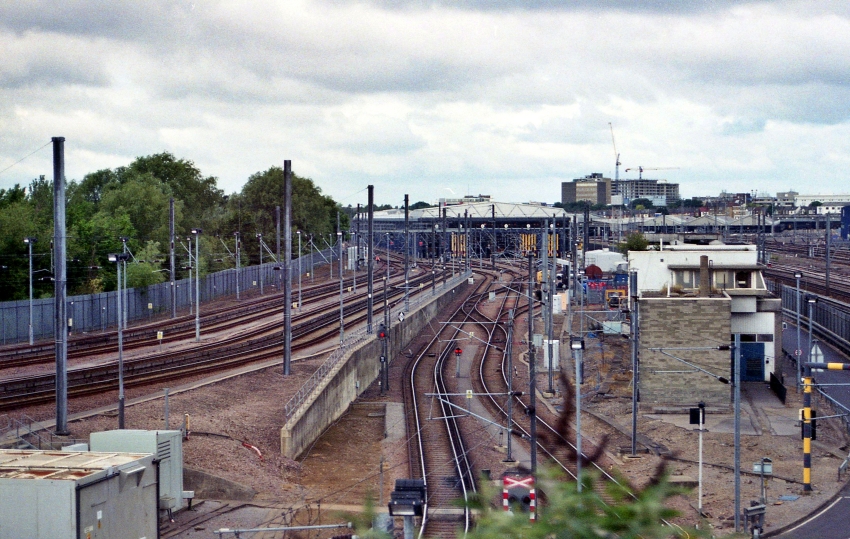 The western of the two main shed buildings can be seen in this view from the West London Line, three of the six roads being closed off by the wasp-patterned doors. All lines were wired for 25 KV AC power, although were initially fed by the third rail of the West London Line. On the right is the Great Western Main Line; the shed buildings in the background, on the right, were those of Old Oak Common. © David Glasspool 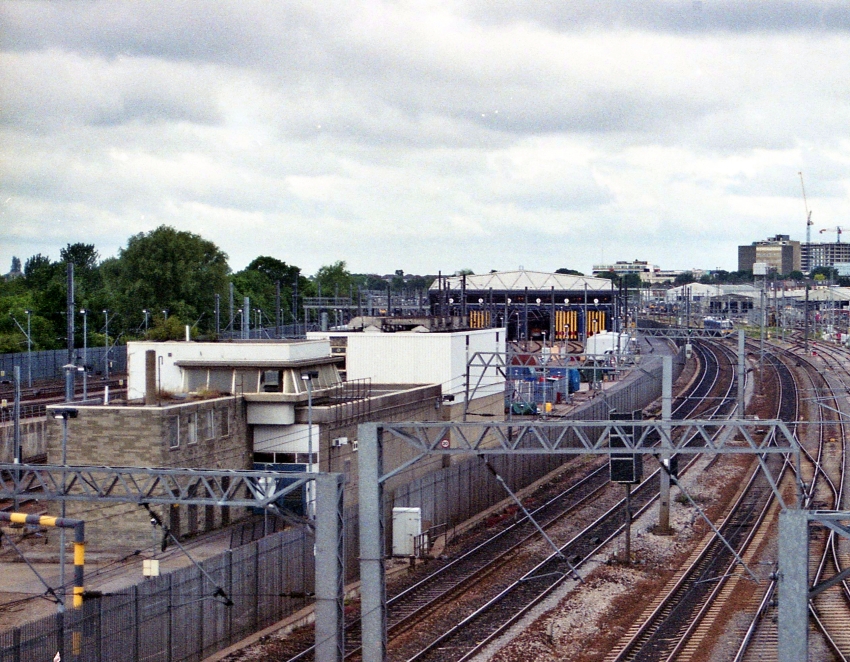 Moving just to the right of the previous photograph, the four-track Great Western Main Line is in evidence, separated from the depot complex by palisade fencing. The overhead wires went as far as Airport Junction and were used by the Heathrow Express. The peculiar structure at the bottom left (which looks like its design has been based on an industrial diesel shunter) is Old Oak Common signal box. This had been absorbed into the North Pole Depot site and had closed ten years before this photograph was taken, in May 1995. The building was sporting a smashed window, but remained standing until 2013, when it was demolished to make way for more tracks as part of the conversion of North Pole Depot to accommodate the Class 800 Hitachi electric multiple unit fleet. © David Glasspool