Today, this remains as a large and spacious layout, testament to the SER's far-sightedness of the need for fast trains to overtake stopping services. This same principle was borne in mind during the development of stations at Tonbridge, Ashford, and Canterbury. "Maidstone Road" station, as it was initially named, came into use with the SER's Tonbridge to Ashford extension on 1st December 1842. It was located within the Parish of Brenchley and resided 45½-miles from London and, when the final push to the coast was completed in February 1844, 41¼-miles from Dover. Two main platform surfaces were separated by a quadruple-track arrangement, an impressive affair given that the site was in decidedly rural, sparsely populated surroundings. Indeed, the raison d'être of the station appears purely as an interchange point on the main line for Maidstone traffic, the town of which resided ten miles distant to the north. By this stage, plans were already well advanced for the building of a single-track branch to the county town, replacing a horse-drawn coach service between there and the railway. The latter ran six times daily in each direction. It was reported in the SER's records that 21,790 passengers used Maidstone Road between 1st December 1842 and 28th February 1843.

The Maidstone branch, proposed to be 10-miles 2-chains in length, was authorised on 27th June 1843. The Bill allowed the SER to raise a capital of £112,000 (£9,360,000 at 2008 prices) for the line's construction, with the option of taking out loans amounting to an additional £37,300 (£3,120,000 at 2008 prices). Construction took little over a year, the route being inspected by the Board of Trade on 23rd September 1844, two days before opening. The completed line was marginally shorter than originally proposed, extending for 9-miles 65-chains. Resident Engineer was George Robert Stephenson, nephew of George Stephenson of "Rocket" fame. The single-track Maidstone branch was characterised by shallow gradients and easy earthworks, and the line followed the valley of the River Medway for its entirety. Indeed, the original Bill stipulated that the steepest gradient on the line be no more than 20-feet in the mile, and the tightest curve to have a radius of 1320-feet upwards. It was noted at the time that sufficient land had already been purchased for the laying of a second track, west of the existing rails. Should the route later be doubled, bridges and viaducts under the line would require widening, said at the time to be "a very simple process". Major General Pasley was the inspecting officer, and he was accompanied during his visit by Captain Coddington, engineer Stephenson, and Mr Benjamin Cubitt. Sleepers were fabricated from Baltic timber and the line was reported to be well ballasted, drained, and properly fenced. The branch line was recommended for opening on 25th of the same month, as had originally been proposed by the SER.

The main line station had been known unofficially by passengers as "Paddock Wood" since opening, taking its name from the woodland carved open to accommodate the railway. The station formally assumed this name when the branch to Maidstone was commissioned. Paddock Wood, like Tonbridge and Ashford, avoided the SER's economical approach to station provision, and brick, rather than clapboard, was used for the main structures. The Italianate style was the order of the day, and a splendid red-brick main building of this design appeared on the "down" platform. It was two-storeys high, was frescoed at its edges with stone, and was essentially an enlarged version of those Italianate main buildings commissioned along the Hastings line. The "up" platform comprised structures fairly modest in comparison: a two-storey-high red-brick clock tower, virtually identical to that which the SER commissioned at Tunbridge Wells, sat in the company of a single-storey brick building with a hipped slated roof. The latter was flanked either side by timber waiting shelters, which provided the only protection from the elements – indeed, neither platform surface was host to a proper canopy. The clock tower appears to have been incorporated purely to form the southern abutment of the footbridge erected to span all four tracks. The latter was of lattice construction, was roofed, and entered the upper floor of the "down" side building.

Goods facilities at the first station were concentrated at the western end of the layout, sandwiched in-between the road bridge and platform ends. The platform loops both featured small wagon turntables, installed in a straight line north to south, to link a westward-facing siding on the "up" side with a perpendicular-built goods shed on the "down" side. Thus, this link track cut across all four tracks at right angles, but the through lines did not feature wagon turntables. Further, lengthy sidings appeared at the eastern end of the station, around the time of the Maidstone branch's doubling in spring 1846. Indeed, the advent of the branch had seen the commissioning of an eastward-facing bay platform on the "down" side, which allowed trains not continuing onto Tonbridge to leave the "down" loop clear. The layout was controlled by a pair of SER-designed clapboard signals boxes, situated either side of the station. The first was positioned at the western end of the layout, suspended above a siding fed by the "down" loop, upon a series of wooden struts. The cabin, which featured trademark SER sash-style windows, became "Paddock Wood West Yard Signals", and its elevated position allowed the signalman a clear view over the road bridge to the west and the lattice footbridge to the east. The second signal box, to the east, was suspended upon a brick base above a siding which fed off the "up" platform loop. Again, its height afforded an unhindered view over the station footbridge. The cabins originally had signal arms sprouting from their roofs, but these were removed during a later re-signalling in 1898.

The passing of the "Maidstone & Strood Act" on 4th August 1853 allowed the SER to make a northward extension of its branch line. The Maidstone branch thus became a complete loop on the opening of this double-track section, which linked the county town and, indeed, the Weald of Kent main line, with the 1849-opened North Kent Line. The cost of the extension had been estimated at £340,000 (£24,500,000 at 2008 prices), the sum of which would be met by the issue of shares. The SER was also authorised to borrow a further £146,600 (£10,500,000 at 2008 prices). Of direct relevance to Paddock Wood station was the forming of the "Cranbrook & Paddock Wood Railway" on 2nd August 1877, the full details of which can be found within the Hawkhurst section. Fundraising for this scheme was painfully slow, and the first section of the branch line, between Paddock Wood and Hope Mill (Goudhurst), did not open until 1st October 1892. Passenger services reached Hawkhurst, 11½-miles from the main line, on 4th September of the following year. In contrast to the SER's Maidstone branch, the single-track line featured steep gradients and tight curves. A dedicated eastward-facing "up" side bay line was brought into use at the main line station for the branch.

Coinciding with the opening of the branch line to Hawkhurst in 1893 was a rebuild of Paddock Wood station. All existing structures on the "up" platform were obliterated, and the existing footbridge was also taken down. On both platform surfaces, proper canopies were erected. Each were 300-feet in length and covered the extent of the bay platform faces. The canopies were of semi-circular cross-section and sported the SER's trademark clover-patterned valance. A new single-storey red-brick station building, with hipped slated roof, came into use on the "up" side, its appearance, albeit somewhat plainer, being akin to the existing main structures at Ashford. To its immediate west, it was joined by a flat-roof timber waiting shelter. A new lattice footbridge, again roofed, came into use, and emerged through the middle of the canopies. As part of the same works, the wagon turntables and connection with the perpendicular goods shed at the western end of the layout were abolished; the number of sidings on the "up" side here were, however, increased. The large "down" side Italianate station building was retained, and this was joined by a collection of clapboard huts to its west. 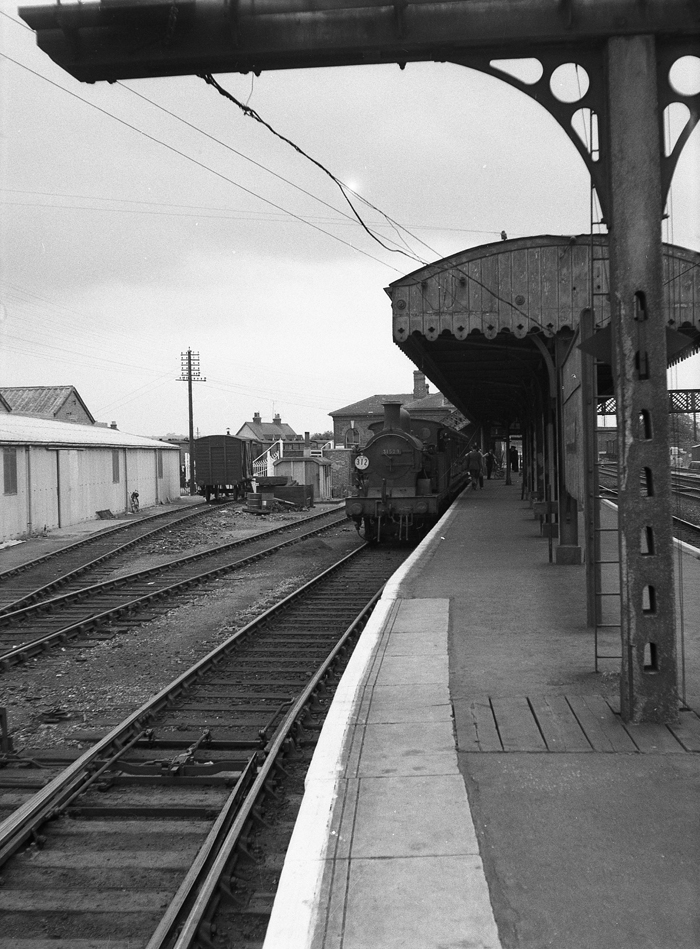 "H" Class No. 31523 is depicted in the "up" side bay platform forming a two-coach service for the Hawkhurst branch line. The platform canopy was looking rather grotty by this time, but by 1961 had received a fresh coat of paint. The back of the huge platform run-in nameboard is evident, as is the concrete post supporting the starting signals. The line upon which the van on the left sits was a loop, which continued over the station's forecourt. There were SE&CR-patterned gates either side of the forecourt which were opened when trains passed through, these of which can be seen behind the van. Although now gone, the same design of gates still survive along Harbour Street, Whitstable, as remnants of the Canterbury & Whitstable branch. © David Glasspool Collection 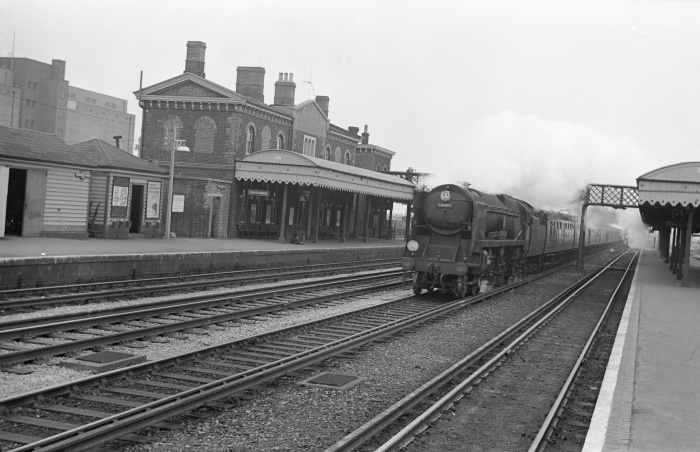 Rebuilt Bulleid Light Pacific No. 34013 "Okehampton" is seen steaming through non-stop from Dover, Charing Cross-bound, in a view which shows to very good effect the substantial “down” side Italianate-style building. This was the oldest part of the station by this stage, the "up" side buildings and footbridge dating from 1893. © David Glasspool Collection 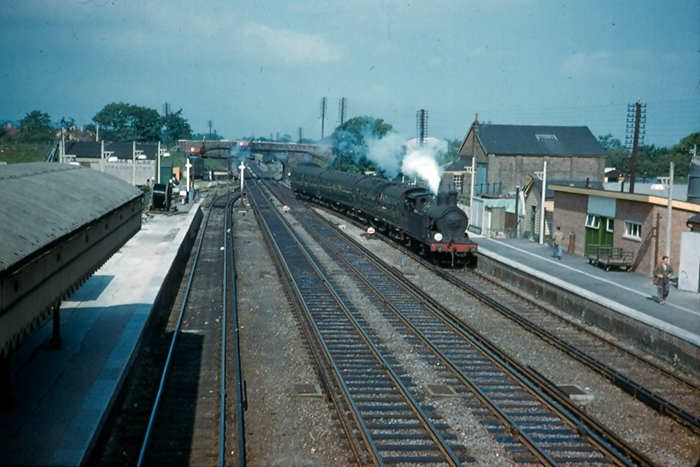 A westward view from the lattice footbridge reveals ''H'' Class No. 31305 entering the ''down'' loop with the 9:42 AM service to Maidstone West, three gleaming Bulleid vehicles in tow. On the right is the then new electrical control room, flanked by BR(S) concrete bracket lampposts. Just in front of the locomotive, we are afforded a glimpse of the prefabricated concrete extension, which has yet to have its run-in name board affixed (this of which can be seen resting on the floor). On the right again, but this time in the background, is visible the goods shed, clearly at right angles to the running lines. This, although still in railway use at the time, had for long lacked a rail connection. Further sidings existed behind the canopy on the left, the connection with these being visible beyond the semaphores. © David Glasspool Collection 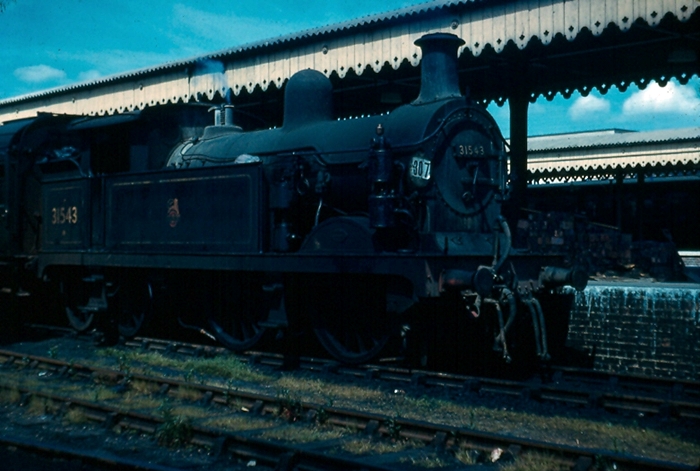 The end is nigh as ''H'' Class No. 31543 is seen in the ''up'' bay at Paddock Wood, fronting a Hawkhurst train. The clover-patterned SER canopy valances are seen to good effect here; the ''down'' side Italianate main building and lattice footbridge are hidden by the locomotive. © David Glasspool Collection 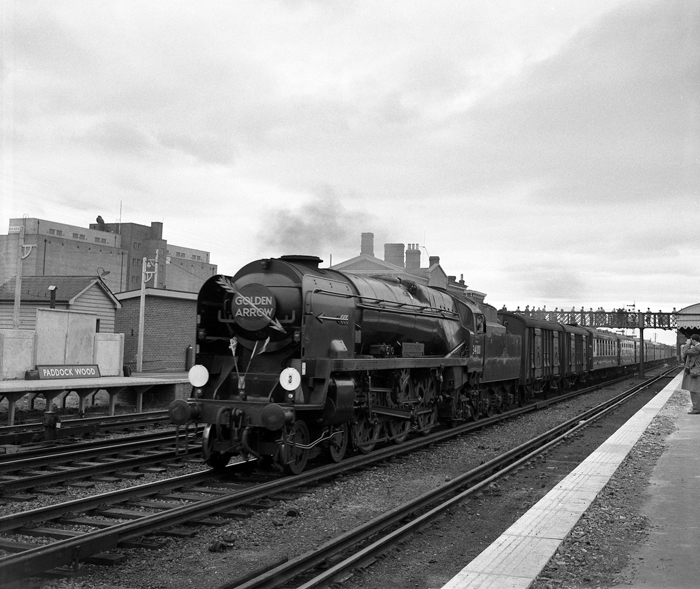 It is 7:00 PM and Rebuilt West Country Class No. 34100 "Appledore" is seen passing through with the last "up" steam-hauled "Golden Arrow", from Dover Marine to London Victoria. A prefabricated concrete platform extension on the "down" side, new platform edging on the "up" side, and conductor rails are evident, all procured for Phase 2 of the Kent Coast Electrification Scheme. © David Glasspool Collection