The second branch emanating from Queenborough was that to the potential seaside resort of Leysdown. Its construction was authorised on 3rd May 1899 with the formation of the independent ''Sheppey Light Railway'', which had been created to build the 8¾ mile long branch cutting through the centre of the island. The company enlisted the services of Holman (later ''Colonel'') Stephens as engineer of the line, a task he undertook concurrent with the development of the ''Kent & East Sussex Light Railway''. Holman Stephens was seemingly a connoisseur when it came to building Light Railways, and the branch across Sheppey was no arduous task to undertake, it crossing mostly flat land requiring the minimal of earthworks. The same man had also engineered the East Kent Light Railway at Shepherdswell, but sadly his lines had one thing in common: they were unprofitable ventures. Perhaps it would be unfair to apply such a verdict to the Colonel's Hawkhurst branch, which for a while did serve the plentiful passenger and goods traffic generated by the growing of hops in the surrounding fields. Through running to Leysdown began on 1st August 1901 and the line's ''Light Railway'' status limited trains to an unadventurous speed limit of 25 MPH, which was, however, perfectly adequate for the nature of the route. Including Leysdown, there were seven stations on this route, the first of which was ''Sheerness East'' - this was the third station named after the island's main town, the remaining two being ''Sheerness Dockyard'' and ''Sheerness-on-Sea''. A northward facing bay line was provided alongside the ''up'' platform at Queenborough station, for terminating trains from Leysdown.

Those stations which opened with the branch were of standard Holman Stephens architecture, being of corrugated iron construction, but their design remained traditional. Although a few more stations appeared shortly after the line's opening, the coastal resort of Leysdown never developed to the degree the original railway promoters had hoped it would. The branch became an early casualty of British Railways, closing to passenger traffic on 4th December 1950. With the ultimate decommissioning of the former Pier branch in 1956 from its ''goods traffic'' status, Queenborough merely became a basic intermediate station, but its goods yard remained open to traffic.

The Kent Coast Electrification heralded the end of mechanical signalling along the Sheerness branch. The signal box was decommissioned on 24th May 1959, when Sittingbourne ‘’power box’’ took control of the area. Sheerness-on-Sea’s mechanical cabin suffered a similar fate. It was also on this date that a significant route improvement was implemented: double-track working. The first scheduled electric services reached Sheerness on 15th June 1959 and for this, the platforms at Queenborough were extended at their northern ends with prefabricated concrete, to accommodate longer EMU formations. An electric sub-station was also constructed at the site to feed the third rail of the Sheerness branch, should the supply from the mainland be cut-off. The goods yard officially closed on 16th August 1971, but the siding remained in situ for the permanent way department, even though the shed was demolished. This closure was shortly followed by the removal of the ''up'' side timber waiting shelter, a soulless bus shelter being erected in its place. The single-storey brick section on the north side of the main station building was razed to the ground and replaced by a portacabin, whilst the ''pitched'' upper floor of the south end of the structure was also demolished, the remaining ground floor section simply receiving a tarmac roof. The exhausts of the chimney stacks have also been removed and sadly, the majority of windows boarded up.

Many thanks to Tom Burnham for providing further information on the historical connection between Queenborough and Lymington stations. 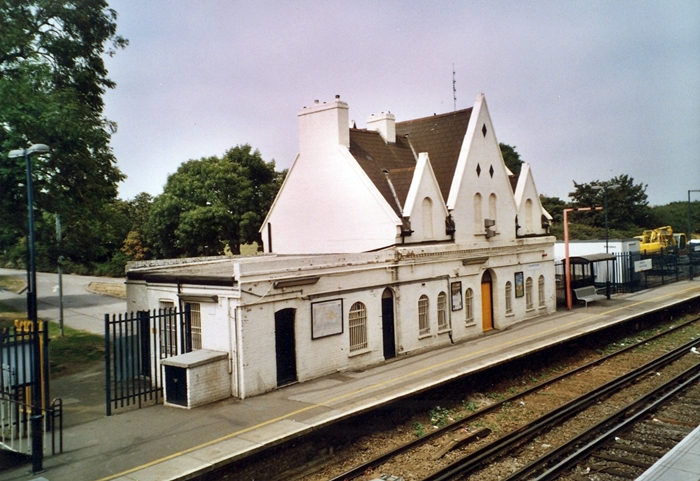 The station building does not look much better from the other side either. Once again, the upper windows are

boarded up and the lower ones have protective bars attached. The white paintwork looked decidedly grubby

in this 1st August 2004 view, but at least this important piece of architecture still stands. © David Glasspool 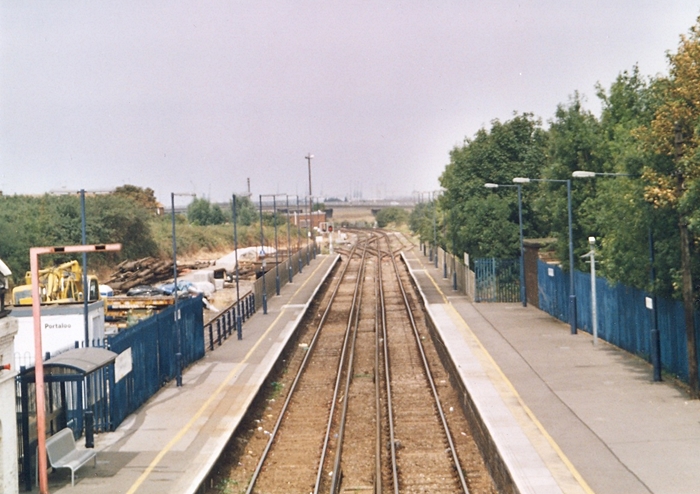 The 1959 concrete platform extensions are evident in this northward view. There are also signs of recent track 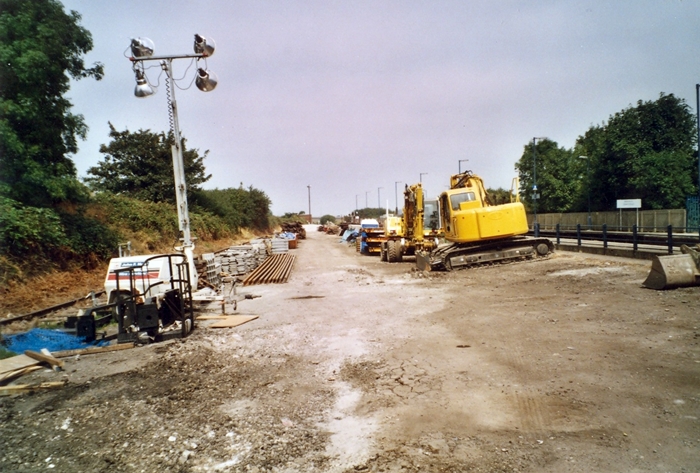 Only one track remained in the goods yard in this northward view. From February 1996, the yard was used by

English Welsh & Scottish Railway and indeed, their sign still proclaimed the company's presence at the site when

this picture was taken. © David Glasspool