The first paper mill in the Sittingbourne area was that of Edward Lloyd, which opened in 1867 as part of his newspaper business. From the outset, this had been supplied by timber delivered by barge along Milton Creek, a small inlet which linked Sittingbourne with the Swale. The creek was also used by barges to convey lime for the cement works in the area, and to deliver sand for the brick-making industry. Furthermore, finished goods were again shipped out on this waterway, and along it, small yards were opened, these of which built the actual barges. As these industries grew, along with their production, the demand for material imports and exports began to outstrip the capacity of the creek. This was compounded by the fact that the waterway had progressively been clogging up with silt, in addition to the pollution dispensed into it by the adjacent factories. Thus, in early 1913, plans were finalised for what became known as ‘’Ridham Dock’’. This complex resided just under two miles north of Milton Creek’s mouth, on an area of land bordering with the Swale, about ⅔ mile east of the SE&CR Sheppey branch. The plans included an internal narrow gauge network of 2 foot 6 inches and a standard gauge connection with the SE&CR’s Sheppey line.

Construction began late in 1913, but this was soon halted the following year with the beginning of World War I. Completion of the dock finally came in 1919, but for the first three years of existence, the complex was used by the Royal Navy. The dock went into Merchant Navy use in 1922 and a year later, Europe’s largest paper mill opened at Kemsley, which saw both standard and narrow gauge networks extended southwards from Ridham to the then new complex. The narrow gauge line connected with the existing system of Lloyds Paper Mill, creating a run of some three and a half miles.

On 31st January 1953, Ridham Dock received considerable damage during the East Coast gales and floods. This saw both standard and narrow gauge locomotives submerged underwater, as well as the domestic rail network. The Bowater Corporation, which had taken charge of Kemsley and Sittingbourne paper mills in 1936, swiftly rented a wharf half a mile north of the former to land goods. The owning company of the jetty was Charles Burley Limited, a cement manufacturer based in Sittingbourne, and its facilities were used until the water subsided and the dock complex could be repaired. An additional section of narrow gauge track was laid between Kemsley and the wharf for the conveyance of materials. The repaired Ridham Dock retained an interesting mix of varying railway gauges until 1969: in this year, the narrow gauge line stretching to Kemsley and Sittingbourne was taken out of use and the length between the latter two locations was preserved. Customary at the time, the transportation of goods was switching to the road. However, it was not the end for the dock and in the same year of the narrow gauge line closure, plans emerged for Sheerness Steel Works. Opened in 1973, the steel works on Sheppey leased part of the dock site. Here, scrap metal was landed from barges which had brought the loads down the Thames from a riverside scrap merchant at Erith. Class 08 and 09 shunters could be found shunting on the remaining track work, taking loaded wagons over the Kingsferry Bridge and on to Sheerness. In the late 1990s, however, Sheerness Steel owning company ‘’Co-Steel’’ was falling foul to poor finances and in December 1998, the sale of the works to ASW Holdings Limited was agreed. Fortunes continued to decline and ASW went into receivership in July 2002, which resulted in scrap metal traffic via Ridham Dock being killed off, the rails going out of use. The dock’s rail complex remained unused for three years, but there was light at the end of the tunnel. In August 2005, the lines were brought back into use by freight operator EWS. The company had secured a contract to transport building materials of German origin, which had come through the Channel Tunnel, to Ridham Dock, where they were to be redistributed. This was divided into five trains a week, which were hoped to replace 1200 lorry trips over a six month period. The track work at the dock was renewed for this purpose. 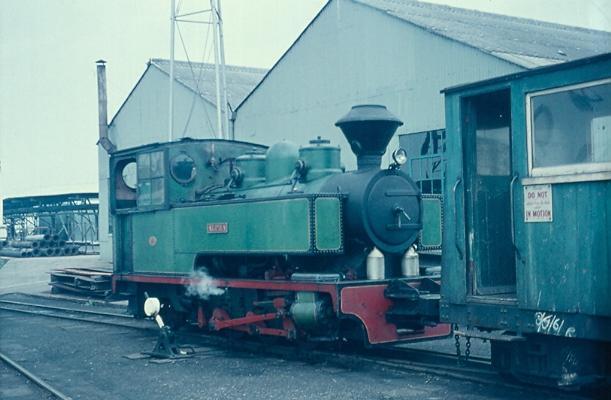 1961, coupled to the passenger stock used by paper mill and dock staff. When the narrow gauge

network went out of use in 1969, this locomotive became part of the preserved fleet of the 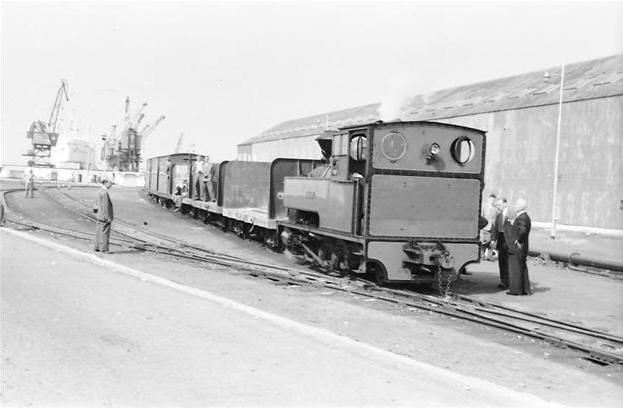 W. G. Bagnall 0-6-2 ''Alpha'' is seen once again at the northern extremity of the Bowater Corporation's

narrow gauge network, this time on 19th July 1958. In the background can be seen the cranes of Ridham