Although the Isle of Wight Railway (IOWR) had originally received Royal Assent in 1860 for a line which extended as far north as Ryde Pier, the company never took their route beyond St Johns Road. The pier was an all-timber affair, authorised in 1812 and erected in 1814 to a design by J. E. Connor, and from the outset extended into the Solent for a length of 1740-feet. Its raison d’être was to serve the Portsmouth steamer ferries, and as the latter grew in size, the pier was extended in piecemeal fashion. In 1842, the pier reached a maximum length of 2250-feet, on completion of a new head. When the IOWR was commissioned for public traffic between Ryde St Johns Road and Shanklin on 23rd August 1864, passengers disembarking from the ferries were, as the crow flies, a mile from the nearest station. In the meantime, a second timber pier was under construction immediately east of the existing framework, and ran parallel with the latter for its entirety. The new structure came into use on 27th August 1864, and its opening was timely, for upon it was laid a double-track horse-drawn tramway. Thus, holidaymakers bound for the town could forgo the trek on foot, but those heading for St Johns Road station still had a further ⅔-mile to travel beyond the pier. Indeed, horse and cart could fill the breach, but this was out of the question during the summer season, when crowds flocked to the island.

The same scenario presented itself on the opposite side of the Solent, whereby LSWR and LB&SCR trains terminated at Portsmouth Town station, a mile from Clarence Pier, where the steam ferries for Ryde departed. This was greatly improved upon by extension to a new site at the edge of the water, Portsmouth Harbour station, on 2nd October 1876, which gave passengers an immediate interchange between train and ferry. On the island, the IOWR had taken no similar action in the name of convenience, and the gap between pier and train at Ryde presented a bottleneck unfavourable to the growing traffic of this increasingly popular holiday resort. Consequently, both LSWR and LB&SCR companies sought to resolve, and on 23rd July 1877, the pair jointly obtained an Act of Parliament to construct a railway pier at Ryde. A double-track line, 1 mile and 19 chains in length, would connect the Pier Head with St Johns Road station, and arrangements would be made for the line to be worked by the independent Isle of Wight companies. Construction of the pier took place during 1879, using cast-iron components. The structure ran parallel with the eastern side of the tramway pier, and was brought into use for rail traffic on 5th April 1880.

At the end of the pier was established a three platform terminus of mostly timber construction, to keep weight to a minimum. Steam cranes were in existence at the head to load and unload the ferries. The platforms were arranged in the form of one island and a side surface. These were built from longitudinal timber planks, extended to 425-feet, and were protected by canopies of equal length. The latter comprised a triangular cross-section, spiked timber valances, and were supported upon an attractive cast-iron framework with ornate brackets. At the northern end of the platforms, a covered concourse was provided, and again, offices were of timber construction. The side platform was located on the western elevation of the pier, and running along its rear edge was a timber windbreak: this rose up to meet the canopy valance, and featured sash-style windows at regular intervals. No such windbreak was erected on the eastern side of the station, and instead, the platform track here was lined on its sea-facing side by iron railings. These same railings flanked both sides of the railway pier between the platforms ends and Ryde Esplanade. 70-yards beyond the ends of the platforms, the triple-track converged to a double formation, at which point a signal box overlooked the line. This was a quaint, LSWR hipped roof design of all-timber construction, located on the western side of the running lines and rising up from the water upon its own cast-iron subframe.

Rebuilding of the earlier two wooden piers, of 1814 and 1864 origin, commenced in 1884, cast-iron being used throughout in the new structures. A substantial two-storey-high pavilion was erected at the heads of the new piers, and the latter became physically joined with the head of the railway pier. The tramway had become an electrically-powered operation in 1886, replacing horses – a brief period of using steam traction had occurred between 1881 and 1884. 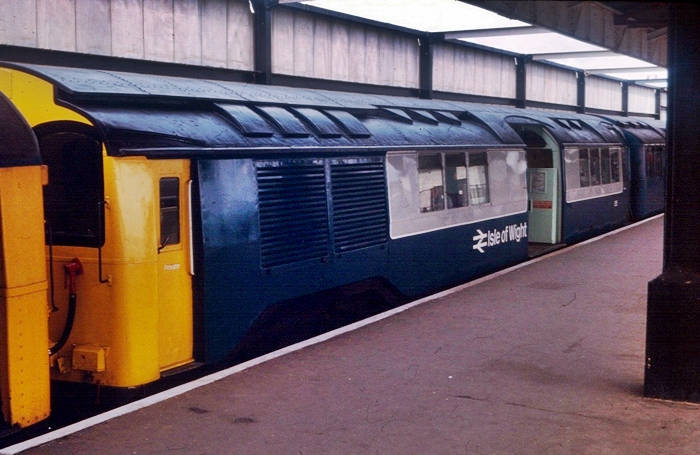 Former Northern City Line stock in evidence at the Pier Head, sandwiched in-between platform 3 and the

station's windbreak. Once a station of four platforms, only the face pictured above is regularly used today. 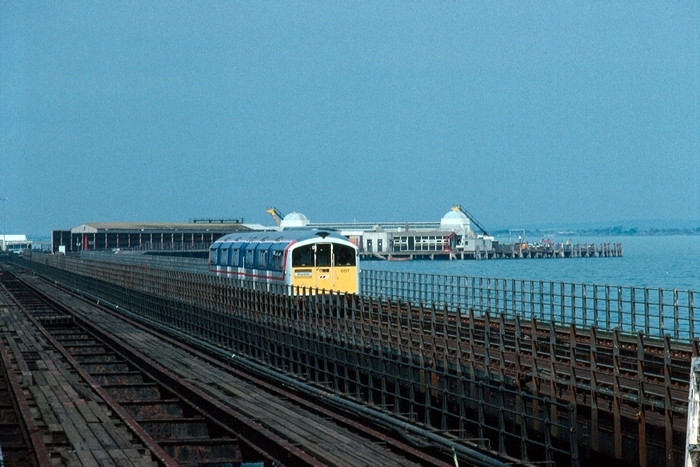 All at sea: Class 483 unit No. 483007 is seen trundling down Ryde Pier at the beginning of its journey to Shanklin.

In the background can be seen the ''Wembley Towers'' of the SR's station building at Pier Head, which replaced

primitive timber offices. In the foreground is the framework of the former tramway pier, whilst in the background 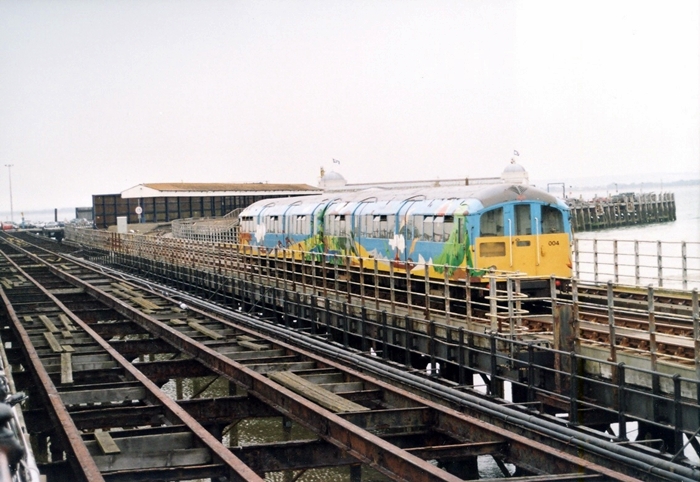 Fifteen years later, the ''Wembley Towers'' had gained flagpoles and the station canopy had been repainted. The

rolling stock was even more colourful than before, as evidenced by Class 483 No. 483004 trundling towards the

end of the line. David Glasspool