Since this station became the headquarters of the Isle of Wight Railway, it seems appropriate to provide a little background to the company of this name. On 23rd July 1860, the ''Isle of Wight (Eastern Section) Railway Company'' (IWR) was incorporated to build a railway from the pier at Ryde, to Ventnor, with branches to Brading Quay and Sandown Bay, creating a network of 12 miles 3 chains extent. The concern was initially authorised by Parliament to raise a capital of £125,900 by the issue of £10 shares, in addition to taking out loans amounting to £41,600. Six Directors were appointed, and as of 1864, the Board appeared in the ‘’Bradshaw’s Railway Manual for Shareholder’’ as follows:

In addition, Officers of the company were:

The given address of the company’s London office was that of its solicitor, George T. Porter. In June 1864, Joseph Bourne was appointed Resident Engineer, Locomotive Superintendent, and General Manager of the Isle of Wight Railway (IOWR). The first section of line between Ryde and Shanklin, 6-miles and 1342-yards in length, came into use on 23rd August of the same year. Intermediate sites were opened at Brading and Sandown, and the single-track line was laid using 70lb flange rails of 4¼-inch height and 5¼-inch base. In the meantime, on 28th July 1863, the company had received Parliamentary approval for a new line, 15¾-miles in length, between Newport and Wroxall. At the latter, a junction would be made with the line from Ryde, and for the project, the company was authorised to raise £105,000 of new capital in shares, plus £68,000 in loans.

The southward extension of 4 miles 16 chains to Ventnor opened to passenger traffic on 10th September 1866. In that year, the IWR recorded a total profit of £5,229 (£357,407 at 2008 prices), £4,070 of which had been generated during the last six months alone. In the second half of 1866, passengers carried between Ryde and Shanklin totalled 162,860, and goods traffic handled amounted to 11,178 tons, all of which generated a gross income for this period of £6,631 (£453,235 at 2008 prices). In the following year the company’s Deputy-Chairman, F.H. Atherley, became Sandown-based, and so begins the story of this interesting station, formally the head of the IOWR.

The site opened with just a single platform, although as at Shanklin, the main building provided from the outset was substantial. This resided on the eastern side of the line, and was two-storeys-high, complete with a gabled pitched-roof. The building was of yellow brick construction throughout and incorporated the Station Master’s house, booking hall, and ticket office. In fact, the structure was a carbon copy of that at Shanklin, featuring sash-style windows and single-storey appendices. However, as will be touched upon later, these buildings were enlarged in very different ways. Both Brading and Shanklin stations were commissioned with passing loops, such being essential at the latter when it was the southern terminus of the line, but it is unclear whether such a facility was in use at Sandown from the outset. Indeed, no goods yard was present in the early years, but the layout eventually developed into a form worthy of the railway’s headquarters.

Of importance to this station’s history was the incorporation of the ‘’Isle of Wight (Newport Junction) Railway’’, by Act of Parliament on 31st July 1868. The company aimed to link the island’s capital, Newport, with Cowes to the North and, to the east, with the existing IOWR from Ryde to Ventnor. Parliament authorised £80,000 (33,353,187 at 2008 prices) capital to be raised through a shares issue, with the power to borrow a further £28,000 (£1,873,615 at 2008 prices) by mortgaging property. The Act also required the provision of a joint station at Sandown, and gave running powers over part of the IOWR. From the outset, the Newport Junction scheme was on a shaky financial footing, but eventually a section of the intended line, between Sandown and Shide, came into use on 1st February 1875. The line was finally extended the remaining 71 chains to Newport on 6th October of the same year, which eventually bankrupted the original company and took the railway into receivership. Services over the route were subsequently taken over by both the ‘’Cowes & Newport Railway’’ (incorporated 8th August 1859) and the ‘’Ryde & Newport Railway’’ (incorporated 25th July 1872).

The 1875 opening of the Shide line brought a second, but seemingly separate, platform into use at Sandown, located to the west of the existing infrastructure. This surface ran parallel with the IOWR line, but appears to have only served the incoming single-track of the Newport Junction railway. Covered waiting accommodation was provided on the new surface, and early maps indicate that a footbridge, at the northern end of the site, linked it with the main IOWR station platform. From the outset, there was no direct connection between Newport and Ryde lines; for trains to move between networks, a reversal manoeuvre was required into the Newport bay line.

Joseph Bourne, the IOWR’s General manager since June 1864, left the company’s service in the summer of 1885. His replacement was James Conner who, like his predecessor, assumed the roles of Resident Engineer, Locomotive Superintendent, and General Manager simultaneously. During Conner’s tenure, the IOWR’s Chairman was Joseph Bravo. Eight years later, in 1983, major improvement works were enacted at Sandown, in conjunction with re-signalling of the IOWR as part of a shift to block post working. The existing platform arrangement was completely eliminated, the main building of 1864 retained but enlarged, and the layout designed to permit through running from Ventnor to Newport. Three 340-foot-long platform faces came into use, two of which formed an island surface sandwiched in-between Ryde and Newport lines. Huge canopies, 200-feet in length, came into use, demonstrating splendid timber valances of an ornate appearance – the design was standardised along the route. The island canopy comprised a roughly triangular cross-section, supported upon a timber framework, and underneath could be found timber offices with sash-style windows. Perhaps the most striking feature of the island canopy was the fact that a three-storey-high signal box emerged through the roof! The layout had been re-signalled by contractor Saxby & Farmer, and the company provided a cabin of all timber construction, set upon a shallow brick base and complete with slated pitched roof. Platforms were linked by a subway.

Alterations to the ‘’down’’ side structures were just as radical as those made to the ‘’up’’ side of the layout. The single-storey appendices of the main building received an upper floor, and the platform became host to a new upward-sloping canopy (as per that on the island platform, this was 200-feet-long and was fitted with the same type of timber valance). This was not all, for a completely new building was also constructed on a site immediately south of the existing station structure. This was a substantial building, of yellow-brick construction throughout, which rivalled the station structure of 1864 in size. It comprised a complicated array of slated pitched roof sections, and its design was akin to that of a church, for it incorporated a tower and steeple. This did not have the appearance of being a new, and very large, house for the Station Master, and it is likely it housed offices for the IOWR. Again, windows were of the sash-style type, and many of the frames were lined at their edges with stone. The then new building sprouted its own small canopy over the platform: this was about 20-feet long and, in contrast to the main canopy, was downward sloping. At its southern end, this small canopy ended in a windbreak, and its downward-sloping nature, combined with the fact that it was about ⅔ the width of the main canopy, made it look like an afterthought of the rebuilt site.

The 1893 works transformed the Newport platform line into a continuous loop, which in turn created a direct connection between the two railway systems at southern end of the station. The new layout saw that all three platform faces could be used by Ryde services, and as the accompanying track plan illustrates, the station acquired a collection of sidings and a recognisable goods yard. The goods facilities were concentrated on the ‘’down’’ side, north of the station, and included a quaint dock line which terminated underneath a loading gauge, with a platform face either side. The small section of platform which served the dock line also had its pitched roof canopy!

The continued growth of summer holiday traffic during the tenure of the Southern Railway led to this company doubling the single-track between Brading and Sandown. This aimed to improve timekeeping on the line, and works included rebuilding numerous overbridges and widening a cutting. Double-track working formally commenced between the two stations on 23rd June 1927. With reference to the station, major alterations at Sandown were not forthcoming under the Southern Railway, for on the company’s advent in 1923, the station was still a comparatively recent rebuild of an earlier primitive affair. By 1940, distinctive Swan Neck gas lamps had appeared on the platforms, and the run-in name boards had frames of prefabricated construction, but this site remained very much an IOWR affair.

Sandown at its zenith, including maximum number of sidings and the Newport connection. Drawn by David Glasspool 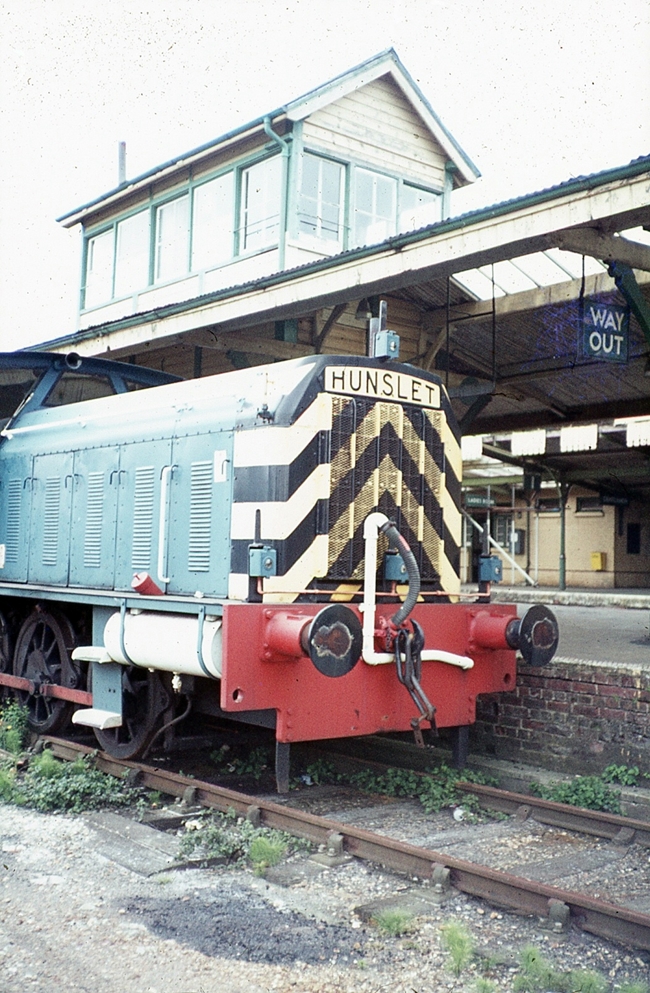 Class 05 No. 05001 is seen stabled alongside platform 3, upon the loop which once gave access to the

Cowes and Newport line. It had arrived on the island in May 1973 as D2554 and received its BR TOPS

number in August of the following year, the only member of its class to do so. It became departmental

No. 97803 in January 1983 and was withdrawn in September of the same year, being replaced by Class

03 No. 03179. The shunter now resides on the Isle of Wight Steam Railway. © David Glasspool Collection 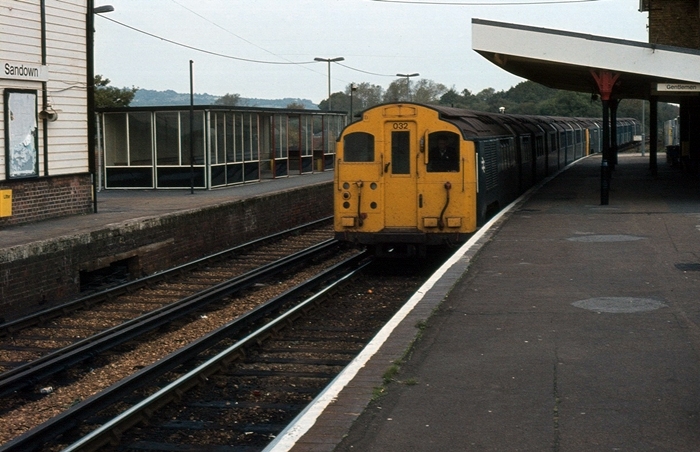 far left, we are afforded a glimpse of the huge timber signal box, complete with its shallow brick base. Notice

the gap in the platform side, where signalling wires emerge. Also in view is the large glazed shelter that replaced

the island platform's canopy. The removal of the canopy permitted a new line of electric lights to be installed

along the surface. On the right can be seen the spruce, albeit severely shortened, ''down'' side canopy, with 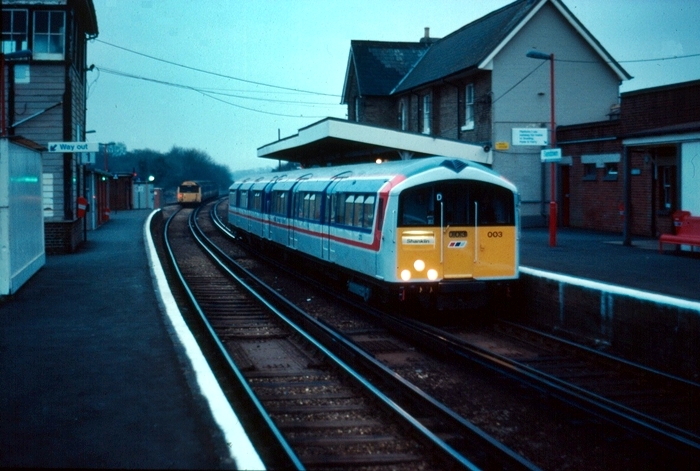 485 disappearing towards Brading, a class of unit which was in terminal decline at this stage. This view better

shows the signal box, which was by this time out of use and soon to be dismantled, after nearly a century of use.

the rails. Finally, on the right, is the original station building of 1864, which appears to have been fitted with