Now the bustling southern terminus of the preserved ‘’Bluebell Railway’’, this was once a quiet intermediate site upon a decidedly rural line. The station was one of four mentioned within the ‘’Lewes & East Grinstead Railway’’ Bill, which was submitted to Parliament on 30th November 1876 and received Royal Assent on 10th August 1877. The L&EGR was headed by the Third Earl of Sheffield, Henry Holroyd, once a Member of Parliament for the Conservative Party, and the line had been promoted by a small group of wealthy local landowners. It was a scheme entirely independent of the LB&SCR, financially and in name, and its raison d’être was to provide a few large country estates with a railway connection. Between Lewes and East Grinstead, double-track was to be laid throughout, and stations were to be as follows (south to north): Newick & Chailey; Fletching & Sheffield Park; Horsted Keynes; and West Hoathly. The construction programme began to stall through lack of capital, even the wealthiest of the line’s promoters being unable to provide the necessary funds for the route’s completion. The LB&SCR was given the opportunity to take over the project, and this the company did without hesitation, for fear of the rival SER jumping in to fill the breach. The L&EGR was formally vested into the LB&SCR on 17th June 1878, and two further stations were planned for the route: New Barcombe and Kingscote.

‘’Fletching & Sheffield Park’’ opened with the colloquially named ‘’Bluebell & Primrose Line’’ on 1st August 1882, the station having been inspected for fitness of use on 21st of the previous month. Fletching was a small village 1½-miles to the east of the station, whilst Sheffield Park was the estate of Henry Holroyd, positioned ¾-mile to the north east of the railway. Single-track had been implemented south of Horsted Keynes as an economy measure, but the track bed and bridges were built to double-track standards, should an additional line be later required. Two 400-foot-long platform surfaces were in evidence from the outset at Fletching & Sheffield Park, situated around a passing loop formation. Each surface was host to a 90-foot-long platform canopy, supported upon wooden stanchions: these followed a standard design, complete with pyramid-shaped roofs and ornate timber valances. The ‘’up’’ side canopy was backed at its rear by a timber framework, in addition to incorporating a wooden-built waiting shelter which extended beyond the rear of the platform edge (a virtually identical arrangement also came into use on the ‘’down’’ platform at Kingscote). The ‘’down’’ canopy was attached to the main building: this was an impressive affair, but as per the canopies, was based on a standard design which was used throughout on the ‘’Bluebell & Primrose Line’’, the delightfully named ‘’Cuckoo Line’ between Eridge and Polegate, and on the route between Chichester and Midhurst. The main constituent of this structure was the Station Master’s house, which comprised two-storeys and a pair of gabled pitched roof sections. The upper floor of the house was finished with exposed timber in-filled with plaster panelling, as per all stations along the line, and the triangular pitched roof sections were covered with vertically-hung clay tiling. Single-storey appendices flanked the house on either side, and that to the south incorporated the booking hall. Finally, both platforms were connected by an imposing 50-foot-long enclosed footbridge, of all-timber construction, positioned immediately north of the canopies. Identical footbridges had come into use at Newick & Chailey and West Hoathly, and in addition to this structure, a pair of track foot crossings existed about midway along the platforms, for use by staff. A barrow crossing was also in existence at the southern end of the layout, to allow trolleys and carts to be wheeled down the platform ramps and across the running lines.

Goods provision here was quite extensive, as a consequence of adjacent local industry. The station’s goods yard was positioned on the ‘’down’’ side, south of the platforms. Not only was the architecture along the line standardised, but so too were the track layouts: goods yards at Newick & Chailey, Sheffield Park, West Hoathly, and Kingscote, were virtually identical. Three southward-facing sidings surrounded a single cattle dock platform surface, and were accompanied to the east by an additional pair of sidings, approximately 130-yards-long, and of similar orientation. A small goods shed was in evidence, but as per others along the route, this lacked a rail connection. Varied freight traffic was also handled behind the ‘’up’’ platform, in the form of two alternate track gauges. As per Kingscote, nearby the station was a sawmill/timber yard, positioned just to the north west of the platforms. This received an indirect single-track connection with the ‘’up’’ line, which required a head shunt manoeuvre into a 200-yard-long refuge siding (another featured shared with the aforementioned stations along the route). A unique characteristic of Sheffield Park was the presence of a 2-foot narrow gauge line, which terminated behind the southern end of the ‘’up’’ platform. This originated from the ‘’Mid-Sussex Creamery’’, which existed about 270-yards south of the station and provided much traffic for the line in the form of milk churns.

Finally, the layout at Sheffield Park was signalled by the LB&SCR itself, and the company erected two signal boxes at the station: North Box and South Box. The former was positioned upon the East Grinstead end of the ‘’down’’ platform, whilst the latter could be found at the opposite end of the ‘’up’’ surface. Both cabins were scaled-down versions of the signal box still in existence at Horst Keynes, and were built to a style reminiscent of those contemporary Saxby & Farmer products – indeed, this design of signal box was standardised not only along the Bluebell & Primrose, but also along the ‘’Cuckoo Line’’ and the Midhurst to Chichester route. 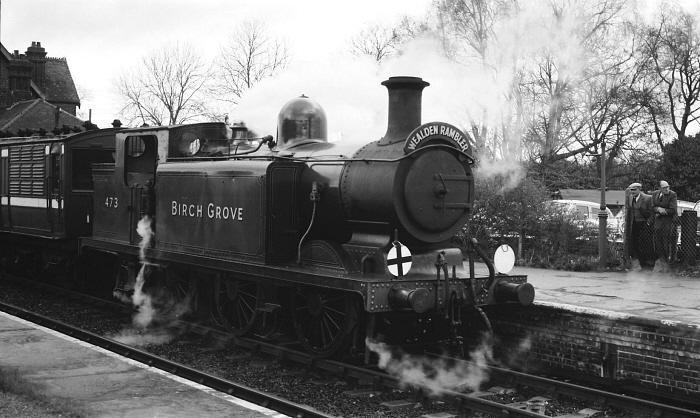 at Sheffield Park, after arrival from Horsted Keynes with the ''Wealden Rambler'' excursion. The locomotive had

been purchased directly from British Railways in 1962, in working order, and was swiftly repainted from BR Black

to Lined Umber livery, complete with name. In tow are four ex-London Transport vehicles, once in use on push-pull

workings on the Chesham branch in Buckinghamshire. © David Glasspool Collection 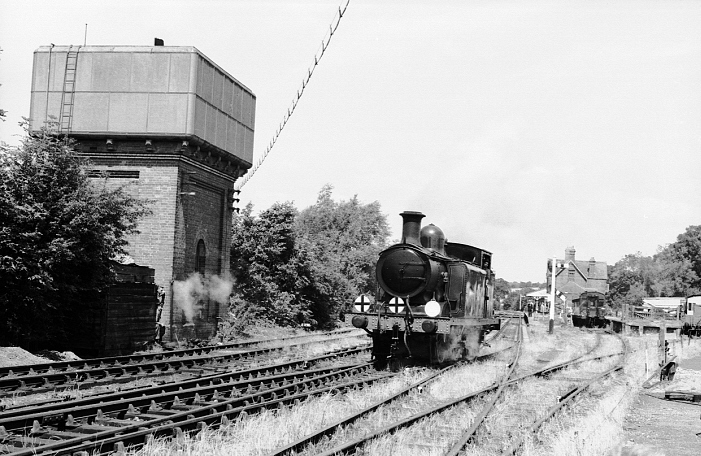 A northward view, including ''Birch Grove'', shows the former goods yard on the right, complete with cattle

loading platform. Of interest is the double-arm signal post and the lack of a footbridge between the platforms.