Slade Green owes its whole existence to the presence of the North Kent Line - it is truly a railway suburb. When the South Eastern Railway opened its route from London Bridge to Strood via Blackheath, Woolwich and Dartford, the area of Slade Green was just bleak marshland with no inhabitants. Not surprisingly, no form of station or any recognisable railway facilities (apart from the track!) were provided here from the outset. The locality's significance increased slightly with the opening of the Bexleyheath line on 1st May 1895, a triangular junction being installed, but the general area still had no official title assigned to it. It was then in 1897 that the South Eastern Railway drew up plans for a large engine shed in the area, utilising a proportion of the vast unused land out on the marshes. The development of the depot is recounted in the Slade Green Depot section, but it is suffice to say that the shed, built for the suburban tank engines of these intensively-used commuter lines, was officially completed on 27th October 1899, the first allocations coming in the following month. The area subsequently became ''Whitehall''.

On 10th November 1898, in its final months of independence, the SER authorised the construction of ninety-one terrace houses on land to the west of the engine shed. To be occupied by the shed's workers, the company subcontracted the building work to ''Messrs Perry & Co'' of Bow, at an approximate cost of £32,500, to be constructed in fifteen rows consisting of six houses. The ninety-first house, which was left isolated, subsequently became the level crossing gate keeper's residence. In the following month the SER authorised yet more house building, this time for a reduced amount of fifty-four terraces, sub-contracted to ''Messrs Smith & Sons'' of South Norwood. The building costs of the houses all came under the overall project cost of the engine shed, which went far over budget! The workers were not to be without local social facilities and at a cost of about £8,500, the same contractor selected to build the first batch of houses was also authorised to construct the ''Railway Hotel''. It would at first appear strange for a hotel to be built in a small conurbation which existed just for the railway workers, but the structure's primary role would naturally have been a pub, with perhaps a few bed and breakfast rooms for visiting management, contractors, or workers from other depots.

More land was purchased, this time by the SE&CR, on 1st March 1899 for the building of a station, to the west of the engine shed, immediately adjacent with the junction of the Bexleyheath line. This was officially opened on 1st July 1900 as ''Slades Green'', the name superseding ''Whitehall'' in the area. Two platforms were provided either side of the double-track and what seems unusual is the incorporation of a single-storey brick-built structure on the ''down'' side, complete with a large ornate canopy. By this time, intermediate stations were generally wholly of clapboard construction - this was certainly the case on the Bexleyheath line, which predates Slades Green by five years. On the ''up'' side was a more typical feature, this being a timber waiting shelter with a sloping roof angled at approximately forty-five degrees. A signal box was positioned at the Dartford end of this same platform, built to the exact same design as that at nearby Barnehurst, ‘’Evans, O’Donnell & Co’’ being the contractors. Despite there being a level crossing, which at a number of other stations acted as an adequate link between platforms, a subway was instead provided, the entrances being to the familiar SER design found at Bexley, Northfleet and Greenhithe. No goods facilities or sidings were ever installed alongside the station, these instead having been incorporated within the engine shed.

Over the years there were no significant changes at this station, mainly because it lacked any of the major facilities which its counterparts had, thus did not experience any closures of large areas of railway land. ''Slades Green'' became ''Slade Green'' on 1st August 1953 and in June of the following year, the platforms were extended with concrete at their London end to accommodate the ten-car EMU formations then being introduced. Big change, decidedly for the worse, came in 1968, when virtually the whole station was razed to the ground and rebuilt using the dreaded CLASP modular system. The only recognisable parts of the original SE&CR station which remained was the brick surround of the ''up'' subway entrance. The signal box closed with the commissioning of the Dartford Panel and colour light signalling on 1st November 1970, both this and the gate keeper's house being demolished. The level crossing was replaced with a footbridge at the same time. 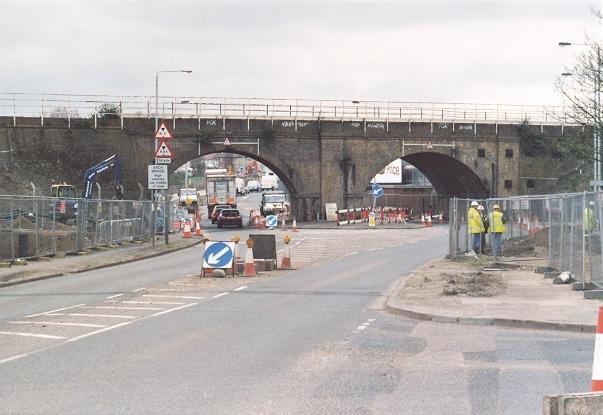 Exactly one mile out from Dartford station, beyond Dartford Junction, the line crosses this two

arched viaduct over Thames Road. Soon after this, the Bexleyheath / Woolwich lines junction

presents itself. The viaduct is seen on 20th April 2006. David Glasspool 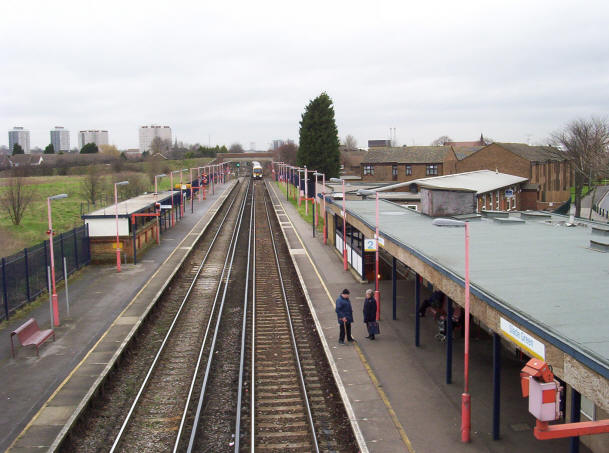 station is the brick surround of the subway entrance, seen on the left. The main station building

site is now occupied by the CLASP monstrosity on the right, and those houses which can be seen

behind it are only recent builds, not original railway workers' residences. David Glasspool