Since the earliest days of an operational Channel Tunnel, motive power native to France has surfaced in Britain, such as the SNCF Class 22200 electrics at Dollands Moor in 1994/1995. Indeed, even a classic SNCF TGV set in the form of the IRIS 320 High Speed Measurement Train, came through the Chunnel and traversed High Speed 1 (HS1) in the dead of night in May 2011 (albeit diesel-hauled). The fraternity of French stock to visit these shores was significantly augmented when, on 21st March 2012, another example of what is arguably the most recognisable train on the continent - a classic SNCF TGV - came to visit St Pancras International in daylight hours.

A consortium of Eurotunnel, SNCF, La Poste, FedEx, Air France/KLM, and Geodis, operating under the name of "EuroCarex", ran a public relations exercise demonstrating the scope for operating a high speed parcels service between the continent and London, for which a TGV set was hired. This departed Lyon-St Exupéry airport on the evening of 20th March 2012 and, after travelling via Paris Charles de Gaulle Airport, the Chunnel, and HS1, arrived at St Pancras International the following morning.

The stock used was not a standard passenger unit, but instead a full "Postal TGV" set. As part of the project to build the Paris Sud-Est (PSE) high speed line between the French capital and Lyon, the first section of which came into use in 1981, a fleet of five half-sets were produced, dedicated to carrying traffic for the French Post Office. These half sets, which together formed two complete TGV units with one half set spare for maintenance, were wholly funded by the French Post Office and introduced on the PSE line on 1st October 1984, superseding an existing air service. Eight trailers were sandwiched in-between two power cars, the whole formation being painted into Post Office yellow and grey livery, and units were capable of a maximum operating speed of 168 MPH (270 KMH). From a technical viewpoint, these units were identical to standard TGV passenger sets, but naturally lacked windows and seats. A further two half sets were later added to the fleet size by converting an existing passenger TGV formation.

Through the Chunnel and along HS1, the TGV was hauled by a pair of Eurotunnel's Class 0001 diesels, given that the postal unit did not have clearance for operation under its own power. For Chunnel working, the diesel locomotives are fitted with exhaust filters. The formation arrived at St Pancras' platform 5 in the early hours of 21st March 2012, the TGV being pushed into the platform by the diesels. This move was achieved by the formation traversing the little-used triangular junction between HS1 and the North London Line, to reverse direction. The diesels were detached and stabled in the siding situated in-between the approaches to platform Nos. 7 and 8. The pair then hauled the TGV out of St Pancras at approximately 11:45 AM, the platform being needed for standard Eurostar services, and for the afternoon the formation was parked in the "up" loop at Singlewell. A facing crossover between the running lines, north west of Singlewell Loops, allows trains heading in the "down" direction to switch over to the "up" line; similarly, a trailing crossover south east of the loops allows a train to rejoin the "down" line from the "up" track. The formation returned to the Chunnel in the evening.

Although the PR run went through to St Pancras, the passenger terminus was not going to play a further part in any potential EuroCarex operation. Rather, a proposed new-build depot at Ripple Lane, Barking, was identified as a rail hub for parcels traffic by high speed rail. The initial extent of the operation outlined high speed parcels services linking Amsterdam, Frankfurt, Liege, London, Lyon, and Roissy, with a possible start date of 2017. However, at the time of the PR operation to St Pancras, the consortium did not own any rolling stock, but was reportedly in talks with Alstom and Siemens over the construction of a dedicated fleet for the service. The carrying capacity of the demonstration TGV postal unit was 120 tonnes, which is the equivalent of seven articulated lorries, or the same number of Boeing 737 aircraft. 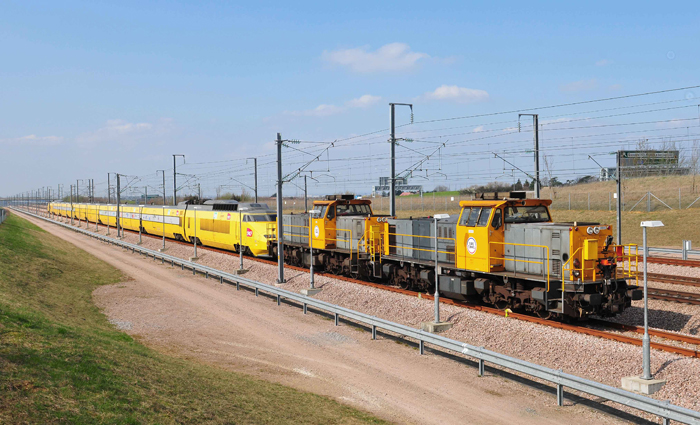 Eurotunnel "Krupp" rescue diesel locomotive Nos. 0004 and 0005 are seen parked in the "up" loop at Singlewell, after the PR trip to St Pancras, coupled to "La Poste" TGV set No. 951. A decline in traditional mail traffic in France resulted in the withdrawal of the dedicated French Post Office TGV fleet in 2015, road transport taking over thereafter. © Ian Cuthbertson