Sole Street is probably the best example of the distinctive LC&DR intermediate stations which still survive today - it is certainly in excellent condition. The station opened shortly after the through route to Victoria via Chatham, on 1st February 1861, and its layout more or less replicates that at nearby Farningham Road. Unlike Meopham, which also opened later than the main line (6th May 1861), Sole Street maintained a wholly brick-built structure on the ''up'' side, which combined the Station Master's house and ticket / waiting facilities - that at the former was a mixture of clapboard and brick. The ''down'' side at Sole Street comprised of the standard timber waiting shelter, the valance of which differed to that of the main ''up'' building; the only brick constituent of shelters such as these were the twelve to sixteen inch high foundations. In common with many of the station's counterparts along the route, no footbridge was provided here, a track foot crossing instead being utilised. A footbridge did finally appear in about 1937 and interestingly, this was of lattice design, very similar to the architecture employed by the SER. However, it is distinguishable from this SER's structures by the curvature of the top flight of stairs and by the width of the lattice pattern - the Southern Railway example is decidedly thinner. It is worth comparing with the example at East Farleigh. The signal box here was also a later addition, of the railway company's own in-house design, and opening in around 1876, concurrent with nearby Meopham's cabin.

A typical single-track goods shed was a usual LC&DR feature, situated at Sole Street on the ''up'' side, just to the west of the station building. This was in the company of an additional siding, which laid immediately parallel to it. Two lengthy rolling stock sidings were also situated directly opposite the goods complex, on the other side of the running lines. Although the SR's suburban electrification reached Gillingham in July 1939, Sole Street remained little changed over the years. For the 1959 Kent Coast electrification there were a couple of modifications which are worth addressing here. Firstly, the platforms had to be lengthened with concrete extensions at their London ends to accept twelve-car EMU formations. In turn, this meant that the second goods siding here, sandwiched in-between the shed and the main ''up'' line, had to be decommissioned in order to vacate its site for the platform modifications - it had terminated right at the end of the original brick face. Although goods traffic ceased in April 1965, the layout here would appear to have witnessed the least amount of rationalisation over the years, compared with its counterparts in the westward direction. The goods shed was demolished, but the single track which fed it was retained, as were the pair of lengthy rolling stock sidings on the north side of the running lines. This still remained the situation in spite of the signal box's closure in July 1972, when control was transferred to Rochester ''Power Box''. Today, the former goods shed siding retains a physical link to the ''up'' line, but those rolling stock sidings on the ''down'' side were disconnected in the 1990s - their rails and sleepers remain in situ, however.

Meanwhile, there have been some other detail differences to the station. Modern metal lamp posts replaced concrete examples of Southern Railway origins in the early 1970s, but more noticeable is the change to the waiting shelter. Formerly, it boasted two windows on its front elevation, either side of the shelter's entrance, these of which were each surrounded by the structure's timber, and at their lower edges, by the brick foundations. Since, the windows and structural surrounds have been totally removed, leaving the shelter accommodation wholly exposed from the front. The five canopy supporting struts still remain, however, as does the original valance design. 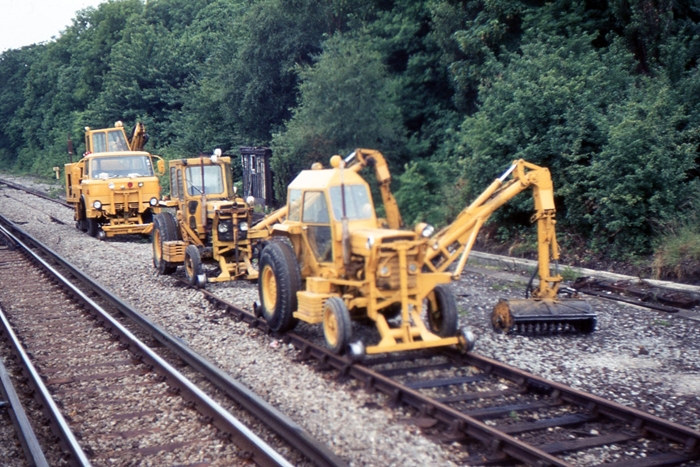 This is the old ''down'' siding, upon which can be seen a couple of tractors and, unusually, a Ford lorry fitted out with hedge cutters on rail wheels. © Roger Goodrum 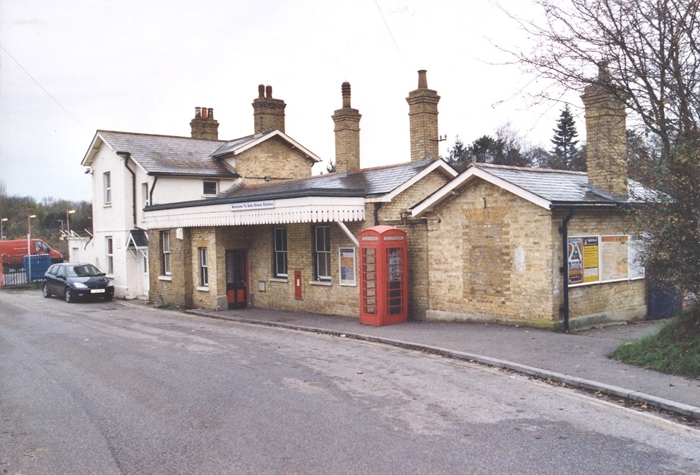 The main station building was looking immaculate when viewed on 20th November 2004. It still retains its tall chimney stacks, a feature which many stations lost during the 1960s. The application of white paint on LC&DR intermediate stations seems to be on random parts of the building, but this is a practice which dates back to the building company itself. Some stations did not receive the white coat from the outset, the LC&DR instead applying it a number of years down the line, whilst others (e.g. Meopham) did not feature it at all. © David Glasspool 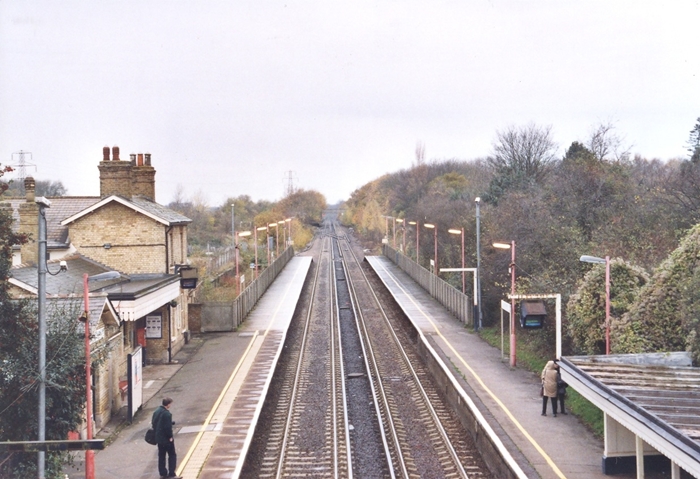 The concrete platform extensions are obvious in this westward view from 20th November 2004. The station building and waiting shelter are not situated directly opposite each other here. The remaining siding is sandwiched between the platform extension on the left and the edge of the car park, but has been little used in recent years. © David Glasspool 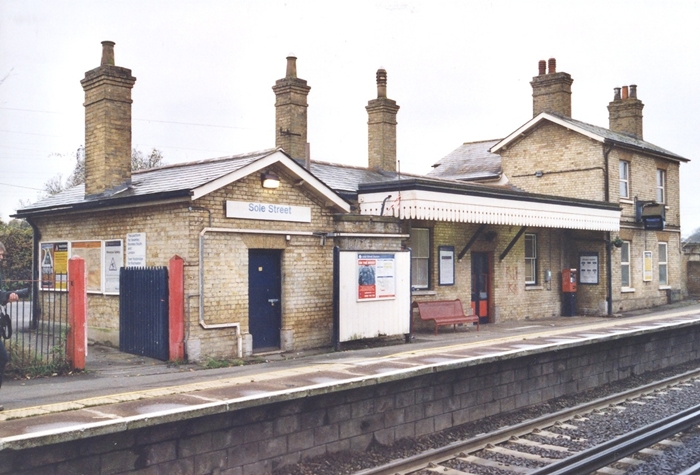 A look at the station building's platform façade reveals that the white paint is not continued from the rear. The absence of the paint allows a clear view of the typical LC&DR cream brickwork, still in evidence at many of the company's surviving stations. Note that the canopy here only protects the immediate surrounds of the building entrance. © David Glasspool