This junction forms the point of convergence of two alternate routes from the capital, directly linking London termini north and south of the Thames with "High Speed 1". However, a policy of cost reduction and concentration of resources on one entry to London has seen Southfleet Junction lose importance. Lately, it has offered little more than an access point from HS1 to a mothballed spur, which most recently has acted as a graveyard for redundant "Eurostar" Class 373 stock. However, after the publishing of the "Kent Route Study" in early 2017, this former entry to HS1 may have a brighter future ahead of it in the capacity of the Ebbsfleet Southern Link.

By 1992, the route of the proposed Channel Tunnel Rail Link (CTRL) had been finalised. This would start at the Euston Road, cut through London's eastern suburbs and a small corner of Essex, before plunging into a tunnel under the Thames. Thence, the line would emerge from beneath the Swanscombe Peninsula, follow the A2/M2 corridor to the Medway Valley, after which it would dive south towards the eastern fringes of Maidstone. From Hollingbourne, the line would run parallel with British Rail's existing Maidstone - Ashford - Dover route, ending just short of the Chunnel portal. This CTRL route was advantageous, for it used much under-developed land in East London - avoiding mass property demolition - and adopted tunnels and existing road/rail corridors where possible, to reduce environmental impact. Additionally, an existing terminus station, St Pancras, was selected to form the main London railway hub for international passengers. However, the commissioning of this new line would occur years after the opening of the Chunnel which meant, until that time, international trains would have to use existing routes between London and the Kent Coast.

The CTRL project was divided into two main parts: Sections 1 and 2. Section 1 encompassed 46-miles (74-KM) of double-track line from Cheriton (Folkestone) to Southfleet, in addition to freight loops at Singlewell and Lenham, and a loop to serve the international platforms at Ashford station. Section 2 was the northern portion of the route, 24-miles (38½-KM) in length from Southfleet to St Pancras, incorporating stations at Ebbsfleet and Stratford, long stretches of tunnel, and a connecting spur to a maintenance depot at Temple Mills. Section 1 was prioritised: its completion would come some years before the northern portion of the line, which meant that until St Pancras was ready, international trains would need to access London by another passage.

The solution of what to do in the intervening years between the opening of Sections 1 and 2 lied with the course of a disused railway line which saw its last scheduled passenger trains in the 1950s. This was the Gravesend West branch, formerly 5-miles-long (8-KM), which ran from Fawkham Junction (¾-mile west of Longfield) on the ‘’Chatham’’ main line, to a pier on the edge of the Thames. The line had opened to passenger traffic on 10th May 1886, with intermediate stops at Southfleet and Rosherville. Always the poorer relation of the SER’s earlier North Kent Line through Gravesend Central, the branch closed to passengers on 3rd August 1953, but freight lasted on the route until 24th March 1968. A truncated section of the line remained in use between Fawkham Junction and Southfleet until 1976, to serve a coal bunker at the latter. Thereafter, the line was abandoned, save for a High Voltage Cable link (33,000 Volts) which followed the course of the track bed and connected the National Grid at Northfleet with a British Rail substation at Fawkham. 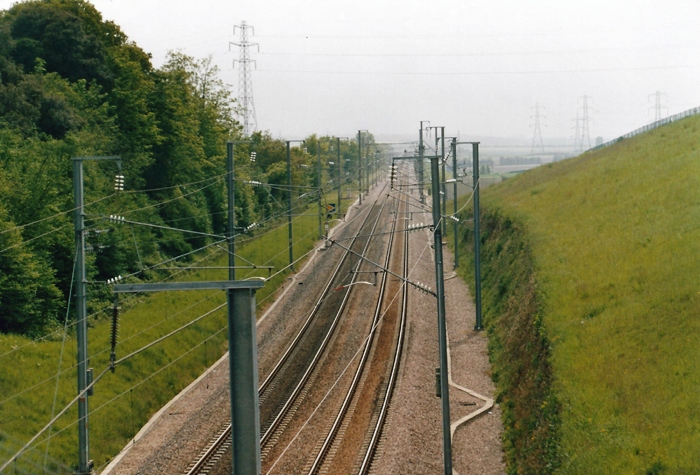 This view looks back towards Fawkham Junction and is from the bridge indicated on the above map, below the words "Station Site". Note that the track begins to deviate in the immediate foreground from the original course of the Gravesend West branch. © David Glasspool 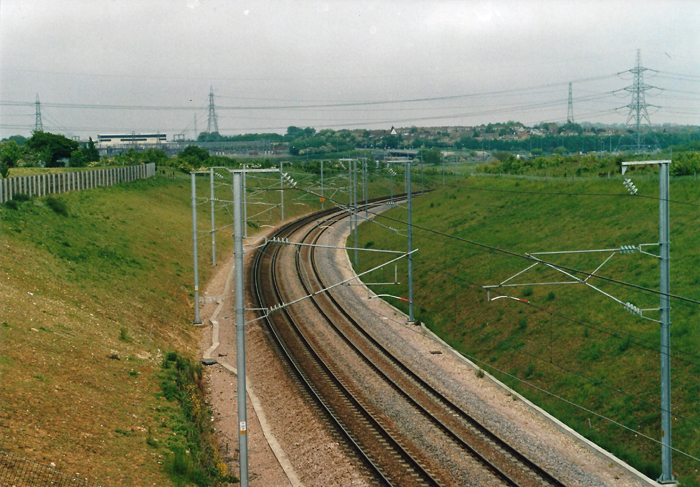 Another view from the same over bridge, this time looking in the Gravesend direction. The line now takes a sharp turn eastwards to meet with the CTRL (HS1) at what is now known as "Southfleet Junction". New earthworks were required to create this curved cutting, and the soil excavated was used to infill the former Southfleet station site. © David Glasspool