On 2nd November 2017, a surprise visitor turned up at St Pancras’ platform 10, an area which typically only sees Eurostar services. The terminus became host to a guest formation which, in a previous era, carried passengers across the borders of multiple countries as per its modern day counterpart. Six gleaming 1920s Pullman passenger cars, in addition to a brake van, owned by SNCF and bearing the legend “Compagnie Internationale des Wagon-Lits”, were brought to the terminus in connection with the London film premiere of “Murder on the Orient Express”.

GBRf’s Class 92 No. 92035 hauled the formation through the Channel Tunnel from Calais Fréthun to Dollands Moor. At the latter, No. 92035 was replaced by Eurotunnel’s “Krupp” diesel locomotives, which departed with the carriages at 23:00 on Wednesday 1st November 2017, bound for St Pancras via “High Speed 1” (HS1). On the approaches to the terminus, a triangle exists, formed by connections between HS1 and the North London Line. The Pullman train first ventured onto this triangle, so it could be reversed and subsequently propelled by the two diesels into the platform, which kept the locomotives out of the Barlow trainshed. The “Krupp” pair were then stabled for the day in the siding which is situated in-between the tracks feeding platform Nos. 7 and 8. The return journey to Dollands Moor was made at 00:20 on 3rd November, and then onwards to Calais Fréthun at 03:30.

In evidence at St Pancras at the same time, opposite the statue of Sir John Betjeman, was a presentation by Belgian chocolate firm “Godiva”. Within individual glass cabinets could be found a model of a steam locomotive and Pullman carriage, both crafted entirely of chocolate. Also used for film promotion, they could later be found by the jukebox seating area, near the escalators leading to platform Nos. 11 to 13. 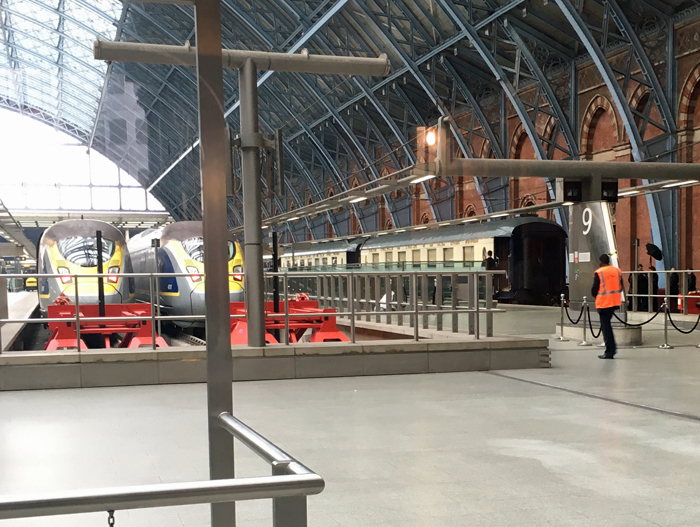 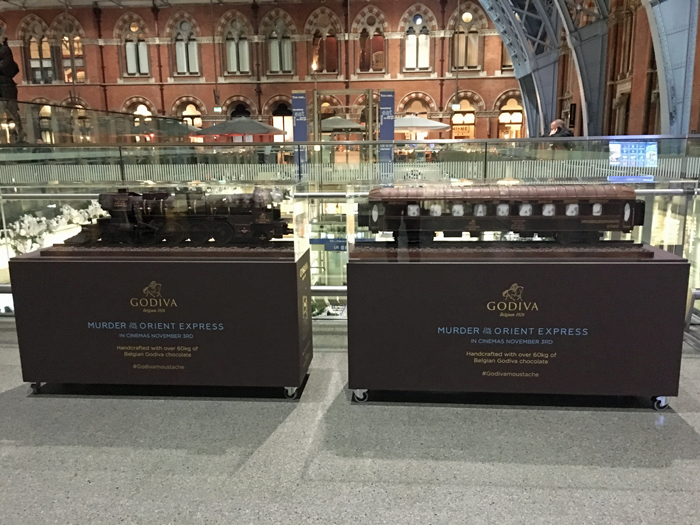 All the chocolate you can eat! A splendidly detailed model of a steam locomotive (minus tender) and Pullman carriage accompanied the real thing at St Pancras. The movie was due to open on 3rd November 2017. © David Glasspool