On 19th December 1995, “Stagecoach Holdings” became the first private company to be awarded a franchise to operate services on part of the former British Rail (BR) network. This encompassed those lines which emanated from London Waterloo, promoted under the title “South West Trains”, and the franchise commenced on 4th February 1996.

Stagecoach’s foray into the privatised railway had, however, begun some years earlier. On 6th May 1992 the government, through the Queen’s Speech, announced the privatisation of BR. Perth-based Stagecoach had been quick off the mark to test the waters of running a private passenger service on BR metals, to parallel its existing road coach operation. Having learnt of BR’s announcement in March 1992 that normal seating accommodation would be discontinued on the Euston to Aberdeen combined sleeper/Motorail/Royal Mail trains (meaning passengers could now only travel on the services if they booked sleeping berths), Stagecoach decided to step into the breach. The company leased six carriages from BR, and the proposal was to attach two of these to each sleeper train run by the latter between Euston and Aberdeen, to provide seated non-sleeping accommodation on the service.

The carriages selected by Stagecoach were BR Mk 2D vehicles from the pool of the InterCity business sector: Nos. 6201, 6202, 6210, 6224, 6228, and 6232. These were repainted into Stagecoach’s colours - a white background with large orange, red, and blue stripes - emblazoned with “Stagecoach Rail” in capital letters across their sides. The work was undertaken at Derby by BREL Ltd, which included laying new flooring and abolishing a W/C in each carriage. The new vehicles were officially launched at Derby on 7th May 1992.

Services containing Stagecoach’s carriages commenced on 11th May 1992. There was one sleeper departure in each direction daily, seven days a week, with the following stopping pattern:

At Edinburgh Waverley, passengers could make connections with Stagecoach road transport to reach Perth, Aviemore, and Inverness. The London-bound working was scheduled to leave Aberdeen at 21:20 and arrive at Euston at 07:02 on weekdays. An "Ordinary Return" for the full extent of the railway trip between Euston and Aberdeen was priced at £130 (£264.20 at 2018 prices), an "Ordinary Single" being half that figure. The cheapest return ticket on offer had to be booked at least seven days in advance and was priced at £54.

The original contract drawn up was for a period of three years, BR receiving an annual payment of £860,000 (£1,748,000 at 2018 prices) for the pleasure of accommodating Stagecoach on the sleeper trains. This was soon found not to be viable and, after the start of the new sleeper timetable on 27th September 1992, revisions to the contract were made. This culminated in a reduced number of tickets being offered by Stagecoach for the service and an early termination of the company’s lease of the six Mk 2 carriages at the end of October 1992. Seating accommodation remained on the sleeper service in spite of the lease coming to an end, but the scenario changed to Stagecoach reserving seats in BR-operated carriages (not necessarily those six which had originally been leased).

In early 1993, the six “Stagecoach Rail” Mk 2 vehicles were repainted into InterCity "Swallow" livery. Although Stagecoach branding had disappeared from the train, the company continued to promote the service under their name until the venture was discontinued on 3rd October 1993. 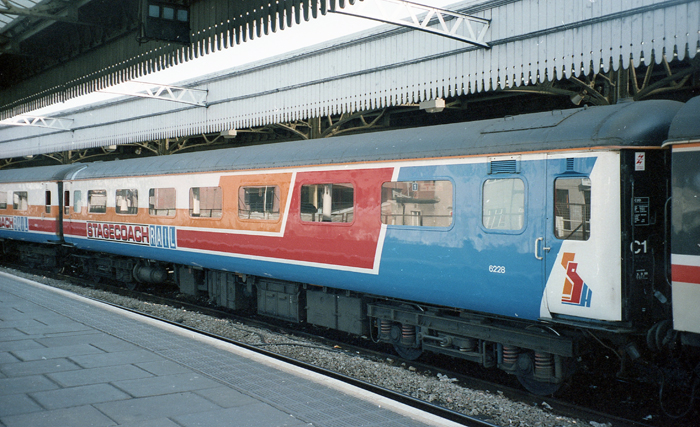 BR Mk2D No. 6228, one of six carriages leased from BR's InterCity (West Coast) business sector, is seen at Aberdeen sporting the short-lived "Stagecoach Rail" livery. When in the sleeper formation, the vehicles were arranged in a way which ensured that the upward stripes of the livery were at the outer ends of the pairing, for a symmetrical appearance. BR was responsible for maintenance of the Stagecoach Mk2 fleet. © David Glasspool Collection