Today, this is a station which shows virtually no trace of its SER heritage, save for a few brick sections of the platforms. Once, however, it was the epitome of a countryside stop along this company’s railway network, combining economy with character. The station came into use with the Tonbridge to Ashford section of the SER’s trunk line from Reigate Junction (Redhill) on 1st December 1842. As outlined within the Pluckley pages, quite often the SER merely provided wooden planks at so-called ‘’stations’’ from the outset; these bridged the gap between ground level and the carriage floor, making embarking and alighting from trains easier. It is likely that such a system was implemented at Staplehurst in the earliest years, recognisable station structures being erected after the commencement of through running to Dover on 7th February 1844. Eventually, a staggered platform arrangement around a double-track emerged. The main building featured on the ‘’up’’ side and was a standard single-storey affair used extensively on SER lines: it was fabricated from tongue-and-groove timber and had a slated pitched roof (complete with protruding brick chimneystacks). The ‘’down’’ platform, which passed under a road bridge, received a diminutive timber shelter at its western extremity; this was near identical to the example which has appeared in much more recent years on the Hastings-bound platform at Appledore, even though the latter has a more or less flat, rather than sloping, roof. Structures on both ‘’up’’ and ‘’down’’ sides were devoid of canopies, and a track foot crossing joined the platforms. With reference to the latter, the staggered surfaces were arranged in positions which ensured that passengers using the foot crossing always passed behind a train stabled alongside either of the platforms. Thus, the risk of accidents was reduced. Finally, both platform surfaces were backed at their rear by solid wooden fences, a practice still in evidence at Pluckley.

As at many stations, goods facilities were enlarged over time. By 1875, a goods yard and coal depot had emerged on the ‘’up’’ side, to the immediate west of the station building. A dedicated siding for the coal depot was laid, alongside a row of coal stacks, and the goods yard itself consisted of four sidings (two of which were loops), complete with a goods shed (a through affair), a small wagon turntable, and a storage warehouse. All sidings considered so far were westward-facing: an eastward-facing freight siding also existed on the ‘’down’’ side, to the west of the platform surface, serving a pair of cattle pens. This layout was greatly improved upon circa 1885; during this year, the station site was generally enhanced. This included considerable lengthening of the existing ‘’down’’ freight siding, but also the creation of further goods facilities to the immediate east of the ‘’up’’ platform. Subsequently, a peculiar arrangement came into use: a single-track was laid on the site of the passenger track foot crossing between the platforms, perpendicular to the running lines, and at either end of this short section of line was a small wagon turntable. With reference to the latter, that north of the running lines received a direct connection with the lengthened ‘’down’’ cattle pen siding, whilst that to the south gave access to a short northward-facing siding and a north-eastward-facing dock line. Finally, a lengthy siding was laid to the east of the road bridge, alongside the ‘’up’’ running line – long sidings such as this were also installed at Headcorn and Pluckley during the same period. The enlarged layout was controlled by a proper signal box, this being a slim, two-storey-high all-timber SER-designed affair. Complete with sash-style windows, the signal cabin was positioned on the ‘’down’’ side, sandwiched in-between the aforementioned siding and the running line.

Indeed, during the 1885 alterations, the station itself was modified. Both ‘’up’’ and ‘’down’’ platforms were lengthened at their western and eastern ends respectively. Furthermore, the main ‘’up’’ side station building received clapboard appendices on both sides, whilst the ‘’down’’ platform received a completely new waiting shelter. The latter was to the same basic design as that which still exists on the London-bound platform at Pluckley, being constituted of vertically-aligned timber planks, demonstrating a backward-sloping roof, and incorporating casement windows. The shelter was placed just to the west of the nearby road bridge, and despite its presence, its predecessor remained in use. Lastly, the ‘’down’’ side also became host to a two-storey-high water tower, which was formed of a brick base, featured a curved roof, and was situated upon the platform surface, immediately adjacent to the road bridge’s western elevation. 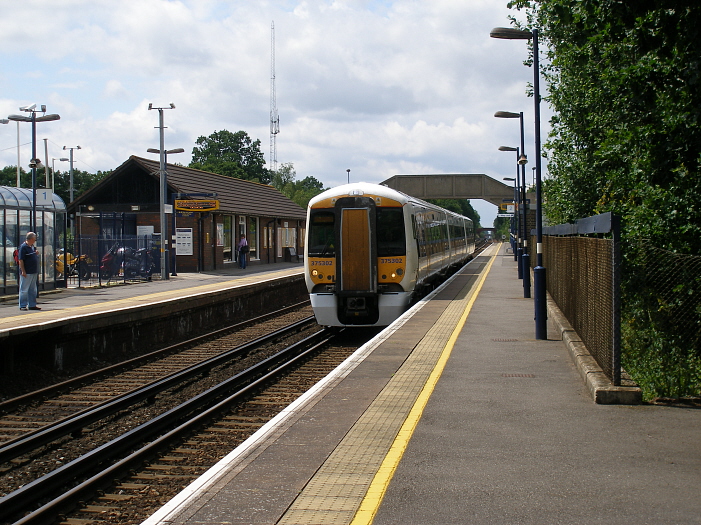 Class 375 No. 375302 is observed passing non-stop to Ashford, through a station which shows virtually no trace

of its SER heritage. Staplehurst is now a modern affair, having changed beyond recognition since the Kent Coast 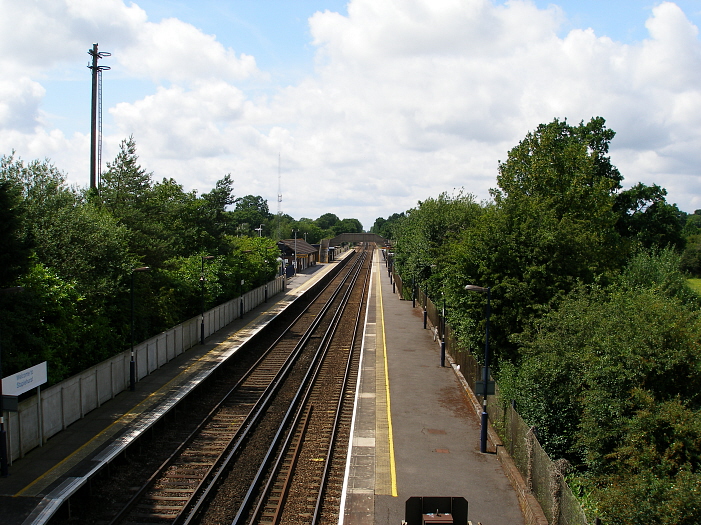 A westward view from the road bridge reveals that the staggered arrangement has been lost over time, as a result

of platform extensions. In the foreground, at the end of the ''down'' (right) platform is the former site of the water

tower mentioned in the main text. This platform formerly continued underneath and beyond the road bridge, but

an extension at its western end allowed this section to be taken out of use. David Glasspool