Starcross must have one of the best views to be seen from any railway station, but alas, virtually all traces of the ex-GWR site have been swept away, and only in comparatively recent years. Just the former atmospheric pumping house, a reminder of those early pioneering days of Brunel, remains as a monument to the site’s illustrious past. The history of ex-GWR stations is often made complex by the fact that many started life serving Broad Gauge lines, only to undergo considerable upheaval during conversion to standard gauge (or at least shortly afterwards).

The line between Exeter and Teignmouth was opened by the South Devon Railway as a single-track 7-foot 0¼-inch line on 30th May 1846 (or 29th May, according to some period sources). Services reached Newton Abbot on 30th September of that year, Totnes on 20th July 1847, and Plymouth (Laira) on 5th May 1848. Starcross came into use with just a single platform, on a stretch of line which ran parallel with the Exe Estuary. The platform was fed by an ‘’up’’ side loop off the main line (as was the case at Dawlish). Upon it was situated a 100-foot-long single-storey tongue-and-groove timber building. A pitched overall roof, extending the same length as the building, covered the platform and loop. This was supported on its eastern side by a line of iron columns. Undoubtedly, the most imposing building at the site was the atmospheric pumping house, built from sandstone matching the South Devon Cliffs, and positioned south of the platforms. It was one of eight pumping houses situated between Exeter and Newton Abbot, built to an Italianate design with an imposing chimney. These pumping houses contained engines supplied by Cornish engineers Boulton & Watt and Messrs Rennie, and these ranged from 12 HP to 45 HP. The atmospheric principle is covered in greater detail in the Exeter St David’s section.

The Exminster to Starcross stretch of line, some 3¾-route miles, was doubled in September 1860 – that part between Exeter and Exminster was doubled in two separate stages during the following year. Widening of the line also occurred south of Teignmouth station to Newton Abbot, but between the former and Starcross, single-track operation remained, save for the platform loop at Dawlish. Eventually, this section was also widened, double-track working between Starcross and Teignmouth commencing on 16th February 1874. As part of the works, additional platforms came into use at both Dawlish and Starcross. At Starcross, a very thin timber ‘’down’’ platform was opened upon the sea wall, and the train shed extended to cover both tracks. A signal box was opened south of the station, on the River Exe side of the double-track, roughly opposite the pumping house.

From the outset, Starcross had been the rail hub for Exmouth, until that town received its own branch line on 1st May 1861 (courtesy of the ‘’Exeter & Exmouth Railway’’). This involved a ferry trip of about 1¼-miles across the Exe Estuary, which ran all seasons and, by 1870, attracted a fare of 6d per couple (£1.87 at 2010 prices).

In the meantime, atmospheric propulsion had permanently given way to locomotive haulage on the SDR on 10th September 1848. Starcross pumping house had experienced a short life in its original form – ten years later, a siding was laid into the building, when part of it became home to a coal merchant. Maps from 1890 still show this siding in situ, although it had been truncated by the turn of the century and no longer entered the building. From 1869, part of the former pumping house also took on a new role as a Methodist chapel. Near the turn of the century, the chimney of this structure had to be reduced in height due to fear of collapse, as a result of storm damage. 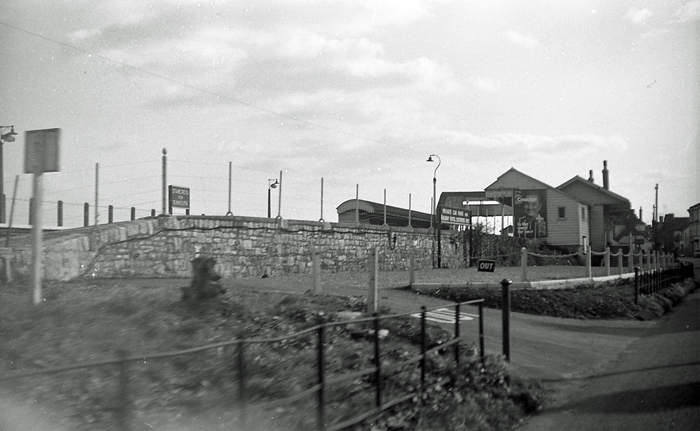 A Dawlish-bound view includes the original Broad Gauge-era timber buildings of the South Devon Railway (SDR). The standard canopies date from 1906, when the trainshed roof was taken down. With reference to the latter, the angle of this is represented by that part of the "up" building's roof which is sloping upwards towards the rails, and was a structure much like that which remains at Frome. The waiting shelter on the "down" platform is also partly of SDR origin; the timber sides and rear are of the original company's design, having formed part of the dismantled overall roof. The station name board read "Starcross for Exmouth", trains here making a connection with a foot passenger ferry across the River Exe. The car park in the foreground was that of the nearby Railway Hotel, on the opposite side of the road, and not that of the station. © David Glasspool Collection 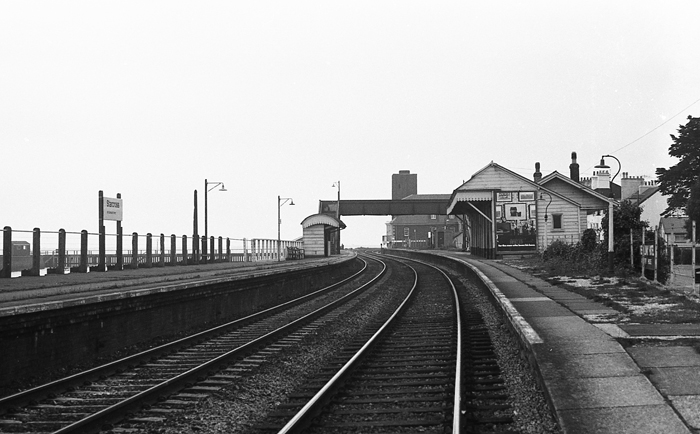 A southward view shows the truncated chimney of Brunel's former atmospheric pumping house in the background. In the distance, behind the railings on the left, can be seen the jetty for the ferry to Exmouth. The station name boards had been switched to the plain type by this time and the footbridge had lost its roof. C. L. Caddy / © David Glasspool Collection 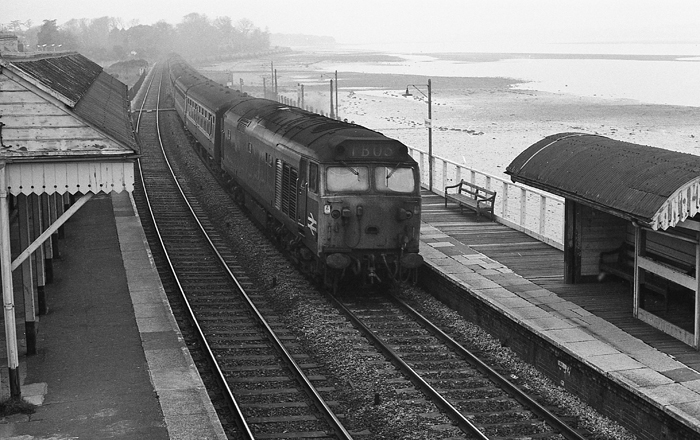 A filthy Class 50, No. 50032, is seen passing through with BR Mk 2a stock in tow, Plymouth-bound. This diesel class had been displaced from the West Coast Main Line in 1974, after electrification between Crewe and Glasgow was completed in May of that year. Compared to the picture from 1965, it is evident that the "down" waiting shelter had been considerably shortened and was missing a timber panel. C. L. Caddy / © David Glasspool Collection

Heading in the opposite direction is Class 50 No. 50044, just as grubby as No. 50032 seen previously, but with small "Arrows of Indecision" logo on the main body side, rather than below the cab window. The pathway to the Exmouth Ferry jetty can be seen beyond the end of the "down" platform on the left, the latter of which has a surface comprising a mixture of timber and stone slabs. C. L. Caddy / © David Glasspool Collection