As early as 16th January 1995 in the Commons, mention was made of ‘’an emergency crossover and evacuation facility and a connection to a possible depot at Temple Mills’’. Indeed, this was referring to the ‘’Stratford Railway Lands’’, which had been earmarked for redevelopment as part of the Channel Tunnel Rail Link (CTRL). This was at a time when the provision of an international station at Stratford had yet to be confirmed, and the retention of both Waterloo International and North Pole Depot was still very much on the agenda. On 29th February 1996, it was officially announced that ‘’London & Continental Railways’’, a consortium of eight companies, had won the bidding process for the contract to build and operate the CTRL. Crucially, the consortium’s plans included the provision of a Stratford International station and the operation of both St Pancras and Waterloo terminals concurrent with each other – the future was indeed bright, or so it seemed.

It was proposed that maintenance would remain at North Pole Depot after the completion of both phases one and two of the CTRL, and Eurostar formations would reach St Pancras from there by means of the North London Line. By 2004, this had been plunged into doubt, partly because the retention of Waterloo International as a second London hub had become increasingly unlikely, but also as a result of capacity issues on the North London Line. This was already a congested route, which without major and costly infrastructure works, would be unable to accommodate enough paths for Eurostar movements between station and depot. The possibility of a new maintenance facility in the Stratford area had for long been on the cards, and the building of a brand new depot at Temple Mills was deemed as the most cost-effective solution to these capacity issues.

Temple Mills was an extensive marshalling yard that resided in Leyton, to the north of the maze of lines radiating out of Stratford. The yard’s construction had been formally approved in January 1954 at an initial cost of about £2,513,000, and was completed five years later as part of the British Transport Commission’s Modernisation Plan of 1955. Incorporated within the yard was a traction maintenance depot, and L&CR's acquisition of the land was much to the concern of freight operator English, Welsh & Scottish Railway (EWS).

L&CR and EWS: A House Swap

EWS had been using Temple Mills as an East London base for its locomotive maintenance activity and was required to vacate the yard/depot in 2007. The loss of this facility reduced the number of locations within the capital where the company could maintain and service locomotives, and placed much importance on the company’s leasehold on its remaining West London freight base at Old Oak Common. However, by October 2007, it became clear that this location, too, would have to be surrendered. Land occupied by EWS at Old Oak Common had been selected as the location for a Crossrail depot, and the existing buildings and turntable were scheduled to be swept away. Originally, Romford in Essex was to host the depot for Crossrail stock, but these plans received significant opposition due to their impact on Green Belt land. Consequently, alterations saw that the proposed Crossrail depot would be built on a redeveloped Old Oak Common site, the main advantage of this decision being that it reused existing railway land. Unfortunately for EWS, the relinquishing of this facility also meant the loss of very important connections to the major trunk lines radiating out of the capital, which had serious implications for its freight and charter businesses. With reference to the latter, it was stressed by EWS that a London locomotive base with connections to the capital’s major termini was an absolute must.

To solve the EWS conundrum, the possibility of a ‘’house swap’’ with L&CR was brought to the fore. Thus, L&CR would take over redeveloped land once occupied by EWS at Temple Mills, whilst the latter company would move its East and West London locomotive operations into a vacated North Pole Depot. On paper, the move seemed quite simple, but in practice, it would be less than ideal. The North Pole land comprised a thin, elongated area stretching for 1½-miles alongside the Great Western Main Line, whilst its Old Oak Common counterpart was a short, fat site. EWS claimed that the very nature of the North Pole premises would require a greater number of staff, whereas the existing Old Oak Common depot was ideally tailored to locomotive maintenance and could be managed more easily. EWS’ move from Old Oak to North Pole was originally projected to cost £73 million: provision had to be made to maintain a diesel locomotive fleet, stable carriages for charter services, and house maintenance vehicles such as the Network Rail crane and rail grinding train. Furthermore, cleaning facilities at the site would have to be tailored to the type of locomotives and vehicles which constituted the EWS fleet, rather than being geared towards complete Eurostar sets. North Pole was already equipped with shed roads electrified with 25kV overhead wires, in addition to 750V D.C. third rail being present on the depot approach tracks. These were features, however, which were viewed as nonessential by an unconvinced EWS, but since they were already there, the company could perhaps make future use of them. New rail connections would also be required between the depot and the parallel-running GWML.

A further review of the costs of moving EWS from Old Oak to North Pole – including the compensation payable to that company – saw the price tag rise to £93 million. The rating liability on the North Pole lands was also somewhat greater than that of Old Oak and, consequently, the entire move seemed unlikely. Nevertheless, the mass exodus of stock from the EWS-occupied section of the Old Oak Common site was completed in the Spring of 2009 and by July of the same year, much of the site had already been cleared. Sadly, the redevelopment of the grounds has led to the destruction of a number of historic ex-GWR red brick structures, but the surviving turntable is reportedly destined for the National Railway Museum, York. Current proposals still outline EWS at least using the eastern half of the North Pole site and for the time being, much ex-Old Oak Common rolling stock has gone into storage at Eastleigh. 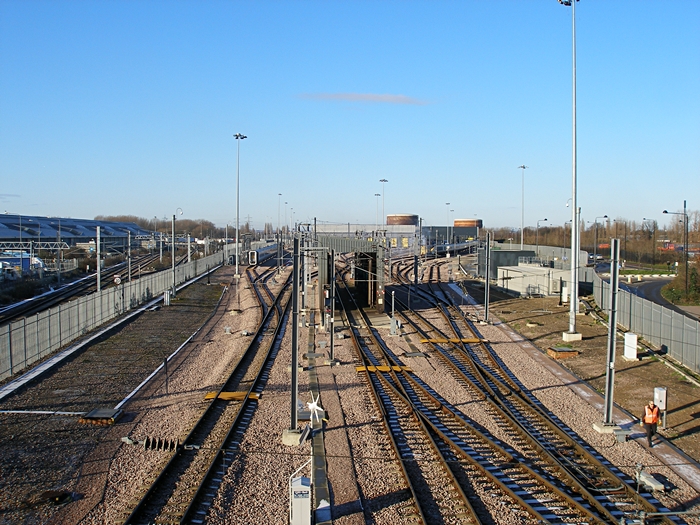 A westward view of the main depot complex reveals, on the left, the double-track Stratford to Tottenham Hale line. In the centre is the automatic carriage washer which, as mentioned in the main text, is used as Class 373 formations enter and leave the maintenance building. © David Glasspool 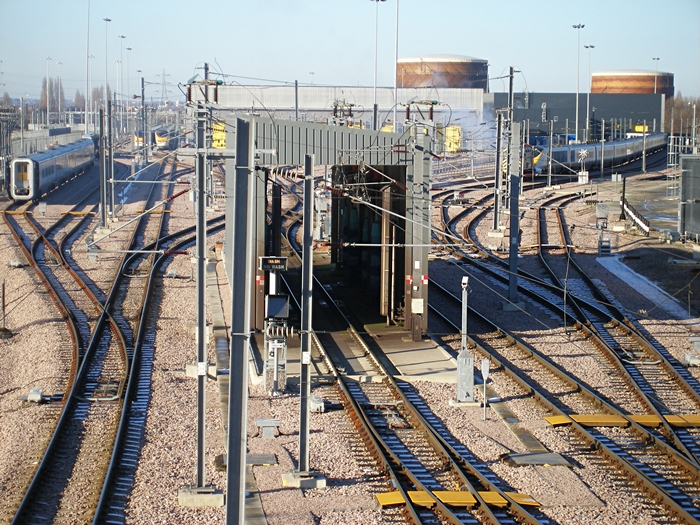 Zooming in reveals much detail. On the left can be seen a Eurostar ''half set'', whilst beyond this, in the background, are a further pair of Trans Manche Super Train formations. To the right of the carriage washer can be seen smoke emanating from a Class 08 Shunter which had just that minute started up (more of later). © David Glasspool 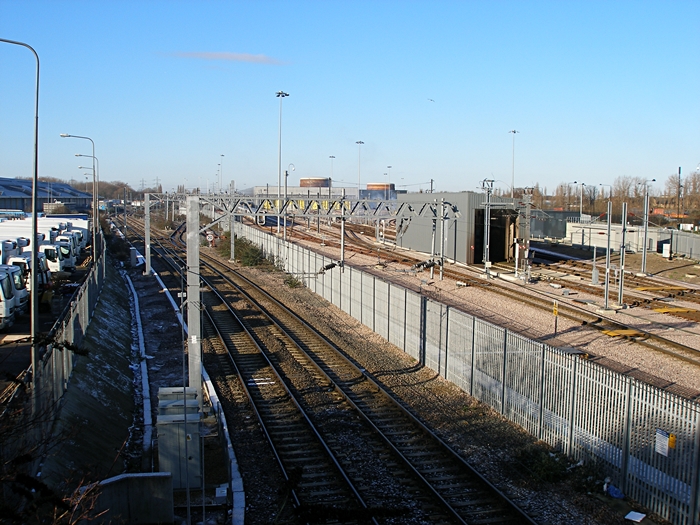 A third westward view better shows the length of the carriage washer and also reveals all eight yellow doors of the heavy maintenance building. The double-track from Stratford, in the foreground, leads to twelve new sidings used to berth rolling stock for Liverpool Street services. © David Glasspool