In 1845, the Brighton Lewes & Hastings Railway (BL&HR) received Parliamentary approval for the construction of a coastal route from Lewes to Ashford, via Hastings and across the Romney Marshes. Alarm bells began ringing for the SER, because the rival London & Brighton Railway (which would ultimately operate the line) now had the opportunity to penetrate deep into heartland of the former. Thus, the SER immediately countered the proposals, instead putting forward an inland route to Hastings, leaving the existing Weald of Kent main line at Headcorn and passing through Tenterden. Despite being a quickly drafted reaction, the SER’s line had the potential to be profitable for both goods and passenger services, for at the time, Tenterden was one of the largest towns in Kent. Parliament preferred the original route of the BL&HR, due to its strategic positioning in light of invasion from the Continent. However, the SER did not wholly lose out, and it was agreed that the company should be responsible for the construction and operation of the Ashford to Hastings section of the route (in fact, the SER’s scope extended just west of Hastings, to what later became ‘’Bopeep Junction’’). Indeed, the loser was Tenterden, and the town was soon overtaken in size by those locations in the county that were early recipients of a railway connection.

No less than six independent attempts since 1845 were made to open lines through Tenterden, which were to leave the Weald of Kent main line at either Headcorn or Paddock Wood. None of these proposals were backed by the SER, and all fell on stony ground. However, there was light at the end of the tunnel when new plans were brought to the fore in 1896. These outlined a branch to Tenterden that, again, made a connection with the SER, but this time at Robertsbridge, upon the ‘’Hastings’’ line via Tunbridge Wells. This had opened to through running on 1st February 1852, and provided the SER with a much shorter route to the Sussex coast, as opposed to that which had earlier opened in 1851, through Appledore and Rye. The 1896 proposals also coincided with the passing of the ‘’Light Railways Act’’, which brought a number of advantages to the building of local, rural branch lines. Crucially, this enabled numerous minor railways, Standard and Narrow Gauge, to be constructed without the need for an Act of Parliament. Furthermore, such lines could be built to lower standards than those ‘’main’’ routes, and the requirements of line side fencing, signalling, and track curvature, were also relaxed. Thus, the costs and time of setting up a branch line were far reduced, but in addition to the advantages, the Act also brought with it restrictions. Severe limits on speed were imposed, and only locomotives and stock below a certain weight were permitted to run. The low construction standards from the outset also meant that infrastructure would wear out more quickly than those railways built to pre-1896 standards, but promoters of Light Railways relied on future profits accrued to finance major replacements. A rail connection for Tenterden started becoming a reality on the incorporation of the ‘’Rother Valley (Light) Railway’’ in 1896.

The Rother Valley Railway (RVR) was engineered throughout by Holman F. Stephens, whom had earlier gained experience as an assistant engineer on the ‘’Cranbrook & Paddock Wood Railway’’. This initially opened between Paddock Wood and Hope Mill (Goudhurst) on 1st October 1892, followed by an extension of services to Hawkhurst on 4th September of the following year. The RVR was brought into use between Robertsbridge and Tenterden on 29th March 1900, initially for goods traffic. Single-track from the outset, passenger traffic commenced on 2nd April of the same year, and unlike the aforementioned Hawkhurst branch, the RVR was run independent of the SER. As the crow flies, the station at Tenterden was 1⅓-miles from the centre of the town it purported to serve, but matters were later improved upon by a snaking, eastward extension to a more conveniently sited terminus. This opened on 16th March 1903 to ‘’Tenterden Town’’ station – the existing ‘’Tenterden’’ station was renamed ‘’Rolvenden’’, even though the village it purported to serve existed 1½-miles to the west. In the same year, a Light Railway Order was obtained, permitting the extension of the line 9½-miles northwards from Tenterden Town to Headcorn, where a physical connection with the SE&CR’s Weald of Kent main line could be made. This opened to traffic on 15th May 1905, but would turn out to be the route’s undoing, for it later became the first section of the line to incur a loss. The RVR was renamed the ‘’Kent & East Sussex (Light) Railway’’ in 1904.

Tenterden Town was, initially, a typical Holman Stephens station, comprising a main building fabricated from corrugated iron. The structure demonstrated a mild downward-sloping roof, from front to rear, and was positioned upon a single platform surface built on the south side of the incoming single-track from Rolvenden. Significant improvements were made on the opening of the Headcorn extension in May 1905: the corrugated iron building was moved to Headcorn (despite having a physical connection here with the SE&CR line, the K&ESR maintained its own single platform alongside the main line station, and called it ‘’Headcorn Junction’’), and in its place was built a far more substantial red brick structure. This was a single-storey affair, measuring about 50-foot long by 20-foot wide, and demonstrated a gabled pitched roof. Attached to the structure was a 30-foot-long upward-sloping timber platform canopy, supported by three wooden stanchions. Although the main building was a brick affair, it is worth noting that substantial sections of timber panelling were evident within every elevation of the structure. Tenterden Town was the only station upon the K&ESR to be constituted of brick, reflecting the importance of the area it served: those station structures westwards, to Robertsbridge, were built from corrugated iron throughout, whilst those commissioned with the Headcorn extension were of clapboard construction (except, of course, that at Headcorn Junction, which as mentioned earlier, was a corrugated iron building formerly in use at Tenterden Town). It also appears that in 1905, Tenterden Town became host to a second platform surface, situated across a double-track from the original platform (a passing loop had been commissioned). This had two faces: one served a loop, which allowed trains to pass in the station, whilst the second face served a Headcorn-facing bay line. The platform was partially offset from the original surface, and was completely exposed to the elements, lacking any form of waiting shelter. Both platforms were, however, hosts to diamond-shaped gas lamps, and were linked at their Robertsbridge ends by a track foot crossing. 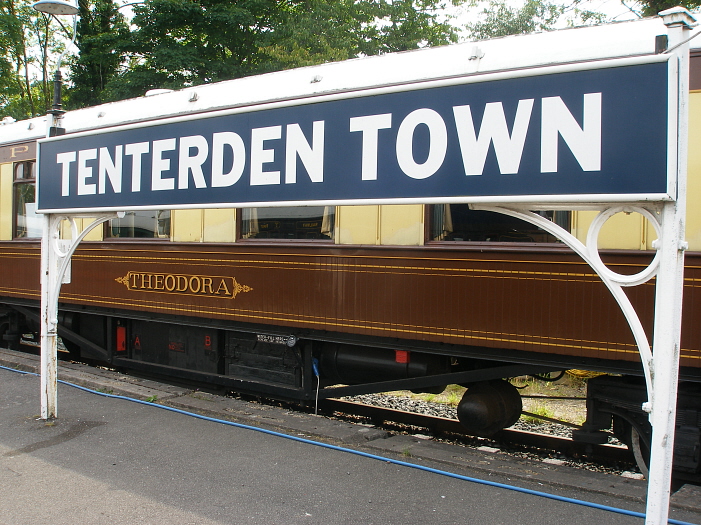 The headquarters of the preserved K&ESR: Tenterden Town. David Glasspool 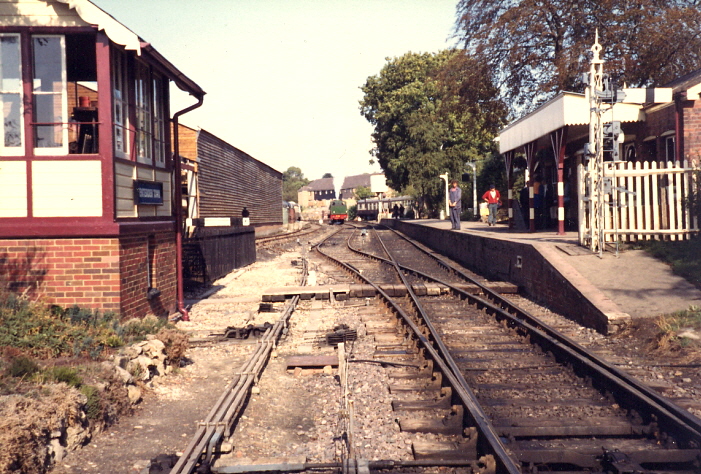 at Chilham until 1968, on the left, and, on the right, the brick-built station building of 1905 origin. Beyond the

signal box, on the left, can be seen the recently-built carriage and wagon repair shed, this of which was still 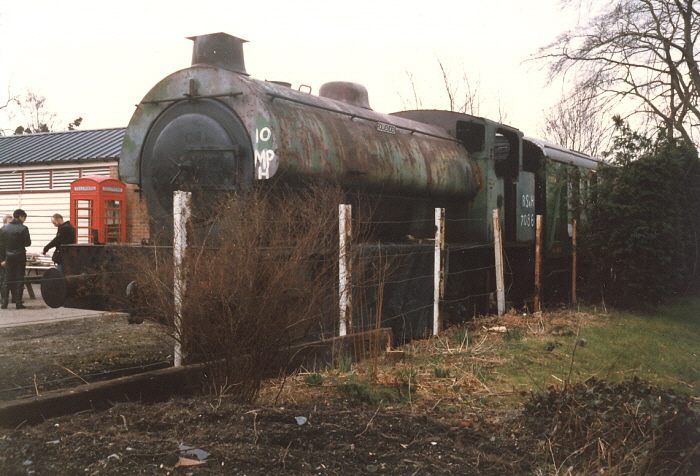 A resident at Tenterden Town for a number of years was this sorry looking ''Austerity'' 0-6-0 Saddle Tank,

War Department 75050. It arrived at Rolvenden from the National Coal Board at Doncaster in September

1979, and was later transported to Tenterden Town in about 1983. In the above view, the locomotive is

seen upon the siding which runs behind the remaining platform surface, complete with provisional name