In connection with the opening of the Channel Tunnel, combined with the commissioning of new high speed lines in France and Belgium, a new range of TGV (Train à Grande Vitesse) services were proposed. These were to link Paris with Brussels, Amsterdam, and Cologne (Köln), an interchange with Eurostar services from London being available at the former two. A dedicated brand name for these services, "Thalys", was unveiled at press conferences in Paris and Brussels on 17th January 1995. Thalys is not an acronym, but it was thought that the name would be easy to pronounce by passengers in the four countries where these trains were planned to run.

Thalys was a joint venture between SNCF (France), SNCB (Belgium), DB (Germany), and NS (Netherlands), but crucially, only the first two were shareholders. To promote and operate those services under the Thalys brand, SNCF and SNCB created a limited liability cooperative by the name of "Westrail International", which formally came into existence on 31st May 1995.

To operate the Thalys services, a dedicated fleet of TGV sets were procured, which met the technical requirements of the lines of the four partner countries. In 1991, SNCF placed an order with GEC-Alsthom to build ninety TGV "Réseau" (French for "Network") sets. Fifty of these were to run on SNCF lines only, so were equipped with dual voltage capability for 25 kV AC and 1.5 kV DC overhead wires. Forty sets were built as three-voltage units which, in addition to the power supplies mentioned, could also run on the 3 kV DC lines in Belgium. Of this batch of forty, ten were allocated to the Thalys train pool, for which they received Dutch signalling equipment to permit operation to Amsterdam. Externally, these sets looked like the earliest TGVs which were deployed on the Paris-Sud Est LGV in September 1981, between the French capital and Lyon. They comprised two streamlined detachable power cars, between which were sandwiched eight articulated carriages.

In addition to the "Réseau" sets, a further order was placed in January 1993 with GEC-Alsthom to build twenty-seven "PBKA" TGV formations. The PBKA abbreviation stood for "Paris-Brussels-Köln-Amsterdam" and these sets were equipped to run on four voltages: 1.5 kV DC, 3 kV DC, 25 kV AC, and 15 kV AC 16⅔ Hz. These trains also consisted of eight articulated carriages, designed as per the "Réseau" sets, but the power cars were completely restyled, being based on those of the contemporary TGV "Duplex" formations then being built. The latter were double-decker trains, ordered from GEC-Alsthom in 1995, intended to boost capacity on core routes between Paris and Lille, and the former and Lyon/Marseille. Formal introduction of the TGV Duplex between Paris and Lyon occurred on 19th December 1996. A centrally-positioned control console in the newer-style power cars provided the driver with improved visibility for left and right-hand running, and left enough space for in-cab signalling equipment for the four countries through which Thalys trains would operate. Ownership of the PBKA units was split as follows: nine SNCF; eleven SNCB; four NS; three DB.

The viability of Thalys relied on two high speed lines: LGV Nord and the Belgian Western High Speed Line (WHSL). LGV Nord ran from Paris to the Chunnel portal at Calais, via Lille, a distance of 333-KM (207-miles), and formally opened to through traffic on 24th September 1993. That was followed by the opening of the Chunnel on 6th May 1994, but the Belgian WHSL, from the French border to Brussels, was still years off. The Belgian Government had published plans for a high-speed railway network in 1990, but it was not until 1992 that the WHSL was formally approved. As a result, it was impossible to coincide the opening of this line with that of the Chunnel and, in the interim, those Brussels-bound Eurostar services from London (and the return workings) ran over the existing SNCB route via Tournai and Mons.

The first section of the Belgian WHSL, between Lille and Antoing, opened to traffic on 2nd June 1996: this marked the beginning of Thalys services between Paris and Amsterdam via Brussels. Full high-speed running through to Brussels was possible on completion of the WHSL in December 1997, the first public services using the entire route from 14th of that month. On the same day, Thalys services began running through to Cologne. This had been preceded by a special "Royal" Thalys run on 10th December, in which the King and Queen of Belgium made a return trip from Brussels Midi to Paris Gare du Nord.

Paris to Amsterdam Thalys services were booked to make the run in 4 hours 46 minutes. When the Belgian WHSL opened throughout, this journey time was reduced to 4 hours 9 minutes. Prior to the opening of the high speed lines, the fastest Brussels to Paris train journey took 3 hours, but on introduction of the Thalys TGV services, this was cut to just 1 hour 25 minutes. From Paris to Cologne, the Thalys journey time was 3 hours 14 minutes. Marked in grey is the Eurostar connection from the Channel Tunnel. Lille Europe was not part of the Thalys network at this time. © David Glasspool 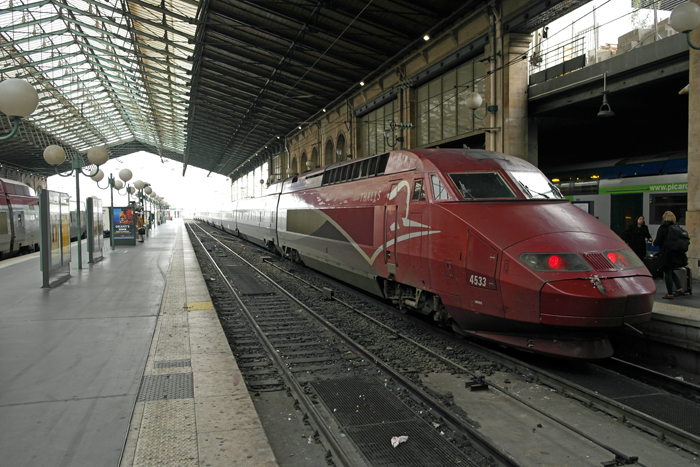 TGV "Réseau" set No. 4533 is seen at Paris Gare du Nord, wearing the red and silver livery which dates back to the first days of Thalys. Detail differences aside, the general appearance of these sets is as per that of the first TGVs which were introduced on LGV Paris Sud-Est in 1981. The logo (notice the capital letters for "THALYS") was designed by Dutch firm "Total Identity", and supposedly depicts a human outline travelling at high speed, pushing through the air. © David Glasspool