Over half of the 24-mile long ''Phase 2'' of the Channel Tunnel Rail Link runs underground from the capital, but on reaching Dagenham in the east, the double-track emerges from a 6½-mile long tunnel and runs on the surface to Thurrock. Here, the line was required not only to cross the London, Tilbury & Southend line and the Dartford Tunnel exit lanes, but also dive under the northern wing of Dartford Bridge, before plunging almost immediately into a tunnel. The entire section of line sandwiched in-between the Dagenham and Thames Tunnel portals was built under contract by a collaborative effort between UK-based ''Morgan EST'' (Early Solutions Together) and French firm ''Vinci Construction Grands Projets''. This eight mile stretch of line, which was planned to run parallel with the existing Tilbury route for much of its length, was priced at £178 million, and 1.4 miles of its extent would be elevated by struts. Construction of this section of line commenced in January 2002, which included the 0.68-mile long Thurrock Viaduct. Indeed, the latter would by no means be as imposing as that which spanned the Medway in Kent, but Essex's viaduct was of a different kind. Whilst the Medway structure was designed to carry the line over a sudden drop - thus remaining flat for its entirety - the viaduct at Thurrock was instead required to gradually lift the line over obstacles, beginning and ending at ground level (hence its arched profile). The structure of Thurrock Viaduct was formally finished on 31st October 2003, and on 26th September of the following year, the whole Dagenham to Thurrock section of  CTRL's ''Phase 2'' was deemed complete. The final parts of the contract work had included track layout revisions and re-signalling at Ripple Lane, where the sidings of the Ford Motor Company were met. The entire construction of this portion of line utilised some 215,000 m³ of concrete. The 23 spans of Thurrock Viaduct are constituted of separate sections – which were fabricated onsite – measuring between 36 and 40 feet in length. Each weighs in at approximately 300 tonnes, and produces a track bed 40 foot wide. 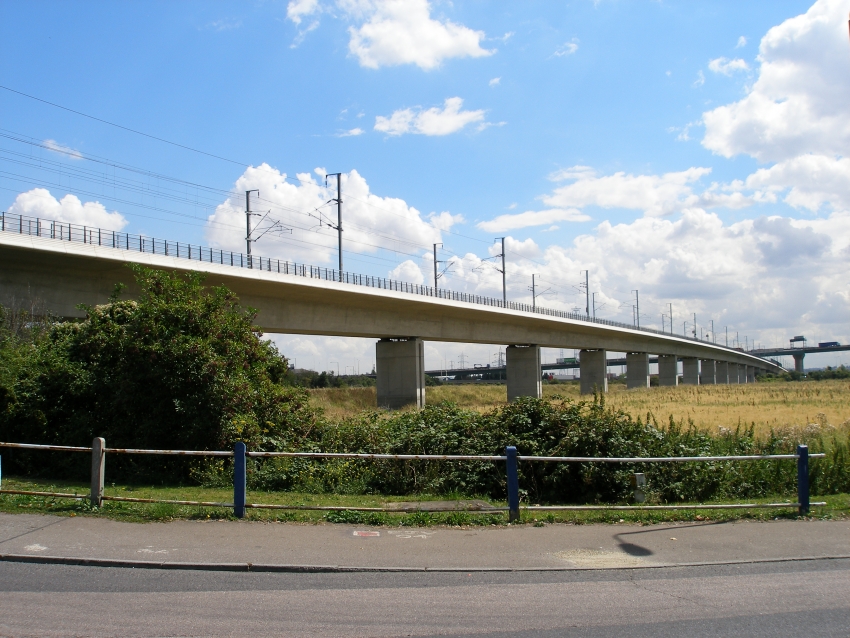 A south easterly view shows the viaduct spanning the marshes, complete with Dartford Bridge in the background. In the distance can be seen a quite severe dip, where the railway flies over the tunnel exit roads, but passes under the Dartford Bridge approach. Immediately after the descent from the viaduct is complete, the line plunges into the Thames Tunnels. © David Glasspool