Greenwich received its first train service on 24th December 1838 when the London & Greenwich Railway was opened fully to London Bridge. The South Eastern Railway took out a 999 year lease on the line in 1845 and four years later, completed its London to Strood North Kent Line, via Dartford. Unfortunately for the SER, the original Greenwich line could not be extended eastwards at this time due to objections from the Royal Observatory, thus a circuitous route via Lewisham, Blackheath, and then back up to Charlton, was taken. Bridging the gap between Greenwich and Charlton began with the opening of a double-track extension from the latter to Maze Hill on 1st January 1873, followed by a final single-track link thence on 1st February 1878. Westcombe Park opened the following year, although the station was initially known as "Coombe Farm Lane". This was merely an intermediate stop on the outskirts of Greenwich, but nevertheless, two platforms were each host to virtually identical single-storey brick buildings. Up to this time, the SER had been providing latterly conceived stations with economical clapboard structures, but brick appears to have had a renaissance at a number of locations (Halling, the rebuilt Yalding), Westcombe Park evidently being included within this. The reason behind this is possibly to keep the station in sympathy with others along the route: at the time, all stations on the Greenwich line and indeed, through to Dartford via Woolwich, had a substantial brick content. Indeed, Maze Hill did demonstrate a significant amount of timber, but this was merely cladding upon brick buildings. Westcombe Park’s structures were each treated with a generous canopy, replicating the design and style of those which had previously appeared at Plumstead in 1859. Passengers also had the luxury of a subway between the platforms, this being accessed via the idiosyncratic SER roof-protected entrances. These had been pioneered on the company’s original North Kent Line, the Dartford Loop Line, and the Dover & Deal Joint Railway.

By the turn of the 20th Century, the station had become "Westcombe Park", but little else, if anything, had so far changed. Its namesake had been demolished in 1900 to make way for housing. No additional facilities, such as goods or stabling sidings, were ever provided from the outset. A signal box of SER design, complete with sash style windows, had opened with the station in 1879, being positioned at the London end of the "up" platform, but even this closed just prior to the Southern Railway’s 1926 electrification, going out of use in February of that year. This company rebuilt the platforms in prefabricated concrete, but significant alterations were not to be seen until under British Rail (BR) auspices. In the early 1980s, BR demolished the "down" side building and canopy, replacing it with just a single bus shelter. The "up" side building lost a chimney stack, but thankfully this, its canopy, and the subway entrances survived.

During 1991, stations within the South Eastern Division’s London suburbs were given concrete platform extensions to accept twelve-vehicle formations. This was a project pioneered by Business Sector "Network SouthEast" to alleviate overcrowding on peak time services. Strangely, Westcombe Park was the only station within the aforementioned parameters not to be so treated, instead remaining with its ten-car platform capacity acquired in June 1954. Limiting factors resulting in this decision are perhaps the close proximity of roads either side of the platforms, compounded by the fact that the station’s immediate environs are a nature reserve. Despite this, 1991 did see the procurement of platform television screens for drivers and in 1999, electronic indicator boards for passengers appeared. More recently, in 2005, a new bus shelter appeared on the "down" side. 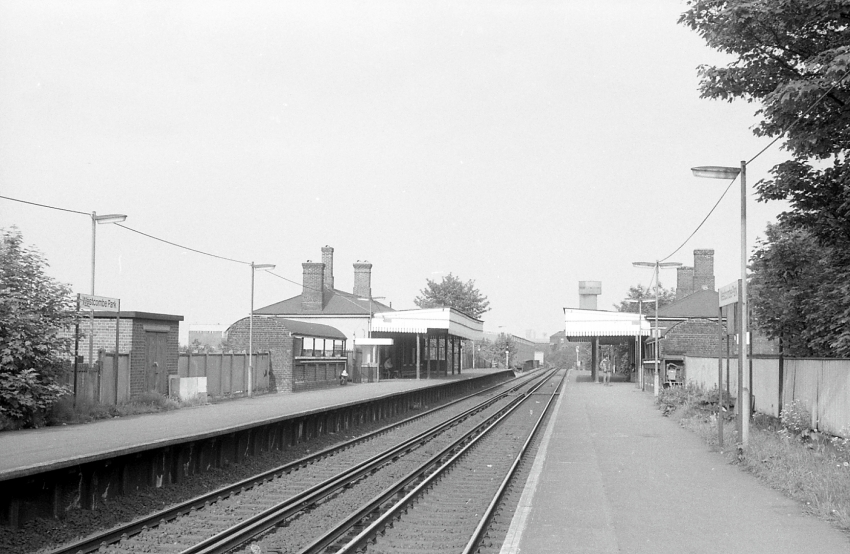 An eastward view shows that "up" and "down" platforms at one time had near identical buildings to each other. The curved subway entrances are characteristically SER, with examples still being evident at Bexley and Northfleet. A track foot crossing for staff still existed between the platforms at this time - note the break in the conductor rails on each track. A chunk of the canopy valance of the "down" side had been taken out so as not to obscure the signal at the end of the platform. © David Glasspool Collection 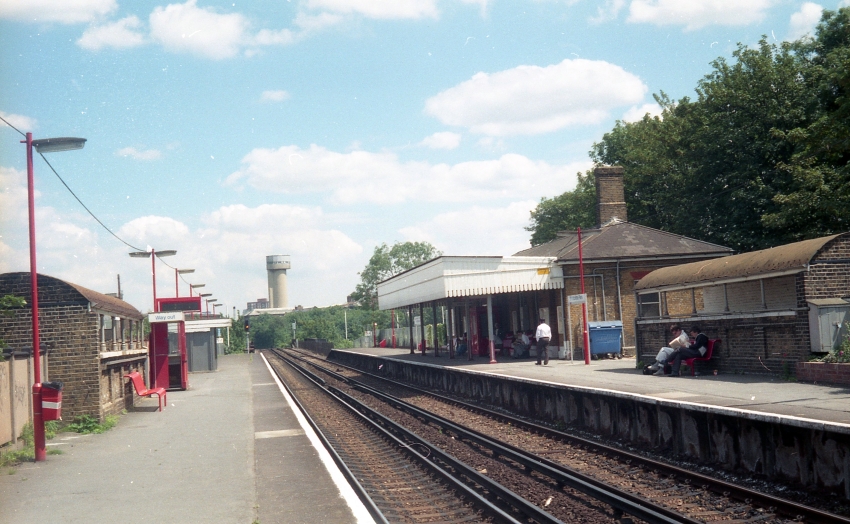 Looking east ten years later, the "down" side building is no more, having been replaced by a CLASP waiting shelter and ticket booth. The "up" side building had lost a chimneystack and the staff track foot crossing between the platforms had gone, but the gap in the conductor rails remained. © David Glasspool Collection 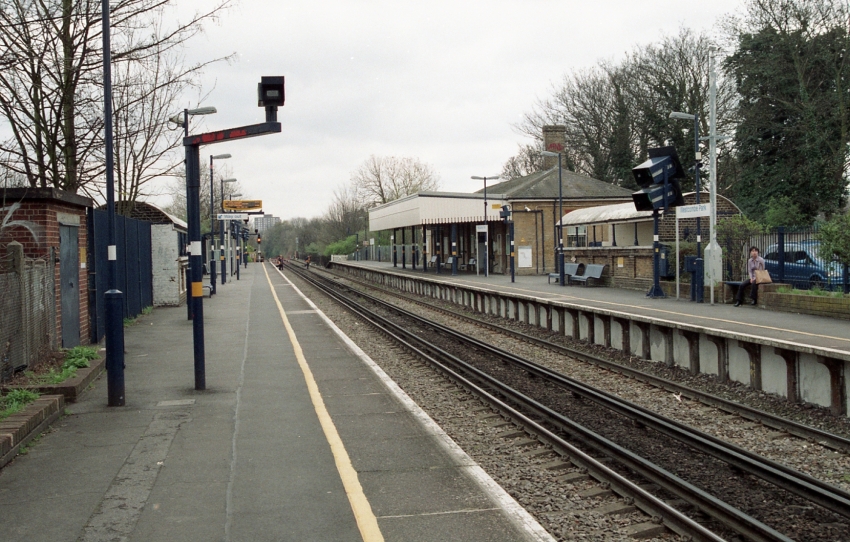 A third eastward view, now in the 21st Century, shows that the "down" side CLASP waiting shelter of the 1980s had already gone, a smaller glazed structure now sitting in its place. The concrete face of the "up" platform had been cleaned and the surfaces were now equipped with television screens for driver-only-operation train dispatch. © David Glasspool