Winchelsea has suffered greatly from rationalisation. Now comprising just a single platform face, equipped with a rather soulless rectangular bus shelter, the station is a rather bleak outpost of the former South Eastern Division. Winchelsea came into use with the SER’s Ashford to Hastings line on 13th February 1851, and the architecture here was indeed familiar. There had been a degree of standardisation along the route, with similar buildings coming into use here, at Ham Street & Orlestone, and Appledore, with perhaps Rye being a rather grand exception. Further structures to virtually identical designs appeared at those stations along the Tonbridge to Hastings route, via Tunbridge Wells, which opened in the following year, and all were products of architect William Tress. Winchelsea was virtually a twin of its Kentish sister at Ham Street. A pair of staggered platforms came into use around a double-track and these were linked by a track foot crossing. As per SER practice, the platforms were arranged in a way that ensured passengers using the foot crossing always passed behind a stabled train, to reduce the risk of individuals being struck. The main building was positioned on the Hastings-bound (‘’down’’) platform, and was an impressive example of Tress’ work, worthy of the Cinque Port. It was red brick in construction, with yellow brick lining the building’s edges, and featured a pair of perpendicular pitched roof sections. Like its twin at Ham Street, the structure boasted an attractive three-piece pagoda-style canopy, and both this and the main roof were slated. Both platforms were backed at their rears with solid timber fencing, like that still in evidence at Pluckley, and at this time, the ‘’up’’ platform lacked any form of waiting accommodation.

The presence of a level crossing at the Ashford end of the station saw that an independent residence was provided for the Crossing Keeper. This was a single-storey bungalow of yellow brick construction, built to a standardised design. Virtually identical examples can still be found in existence at Appledore and Rye. Sandwiched in-between the level crossing and ‘’down’’ platform was the station’s sole goods siding. Freight capacity was improved upon slightly in about 1893: in this year, the primitive signalling at the site was replaced by a more advanced system installed by contractor Saxby & Farmer. One of this company’s attractive signal boxes emerged at the Ashford end of the ‘’down’’ platform; this itself was built to a standardised design, identical cabins emerging in that year along the SER’s Canterbury line. A second siding at Winchelsea was commissioned just beyond the Hastings end of the ‘’up’’ platform, and this had a trailing connection with the adjacent running line.

The SE&CR installed one of its trademark timber waiting shelters on the ‘’up’’ platform. This measured about 20-feet in length, and comprised a backward-sloping roof and an attractive clover-patterned valance, and a similar, albeit marginally larger, example can still be seen at Rye. Throughout the tenure of the Southern Railway, the station remained virtually unchanged from its SE&CR ownership, except of course for alterations affecting name board design and colour (the sign for the Gentlemen's toilets, however, retained its white-backed SE&CR signage). In contrast, however, the British Railways era marked severe cutbacks and economies for Winchelsea, relegating the station’s attractive appearance to one of a mere halt. The Ashford to Hastings route was initially part of the February 1956-approved Kent Coast Electrification Scheme, but it was then abandoned in 1960, and the DEMU service which had commenced two years earlier was retained. Track foot crossings had gone out of use at Rye and Appledore at this time, but both Ham Street and Winchelsea retained this feature between the staggered platforms. Goods traffic at Winchelsea was withdrawn on 1st May 1961, and the signal box probably went out of use soon after this. Eight years later, the Government formally approved British Rail’s plans to close the line across the Romney Marsh. Winchelsea station was rather unloved by this time; derelict inoperable gas lamps remained on the platforms, and thereafter, the station was without any form of lighting for waiting passengers. Much public protest was successful in maintaining a DEMU service along the route, but economies were later made on the line, and it was these that hit Winchelsea hard. On 29th April 1979, singling commenced of the Appledore to Ore section of the line. Winchelsea’s ‘’down’’ platform was taken out of use and the adjacent track lifted – not even a passing loop was retained here. Sadly, the ‘’down’’ side was host to the attractive station building, and this went out of railway use, subsequently being converted into a private house. The ‘’up’’ side waiting shelter lost its attractive canopy at the same time, and the level crossing became equipped with automatic warning lights, albeit without barriers. As a result, the Crossing Keeper became redundant, and his bungalow was swiftly demolished. The remaining platform was re-lined at its rear with mesh fencing, and the station became a bleak affair, particularly at night, since there was no lighting! A pair of illuminated indicator posts, one either side of the level crossing, were, however, installed, to mark the site of the station for train drivers. In about 1984, the timber waiting shelter finally succumbed, and in its place emerged a dreary rectangular bus shelter. A decided improvement was, however, made by the installation of electric lighting upon the remaining platform surface. 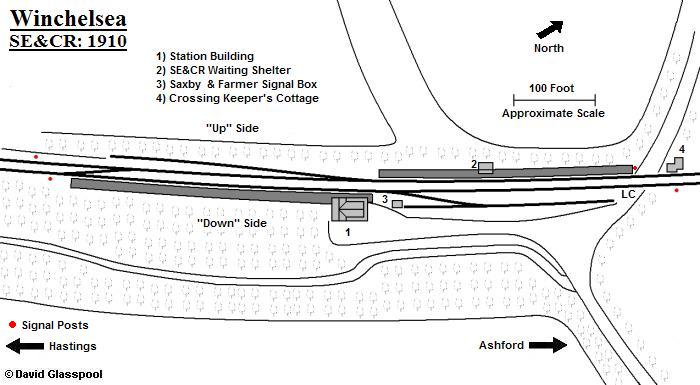 The track foot crossing was located between the platforms where the number ''3'' is marked. The ''up'' siding

had been lifted by 1955. Interestingly, wagon turntables were a feature of Ham Street & Orlestone, but the

sidings at Winchelsea had standard connections with the running lines from the outset. Drawn by David Glasspool 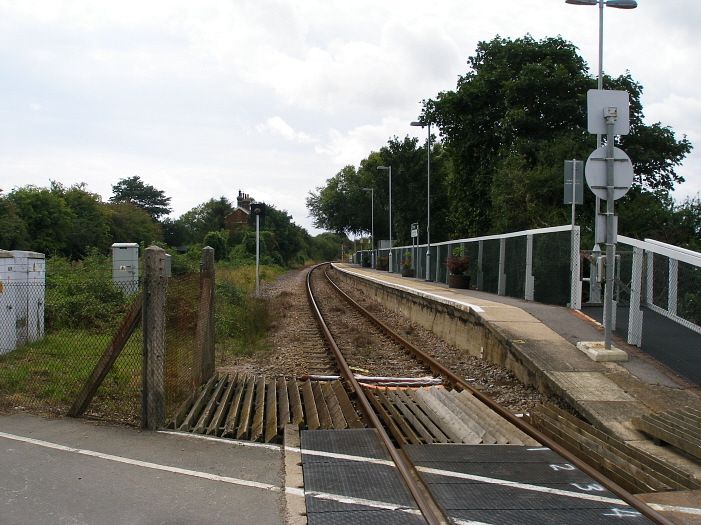 A Hastings-bound view reveals the sole remaining platform surface, formerly designated the ''up'' side. The

original ''down'' side station building is still in existence, and can just be seen emerging from the vegetation

in the background, on the left. David Glasspool 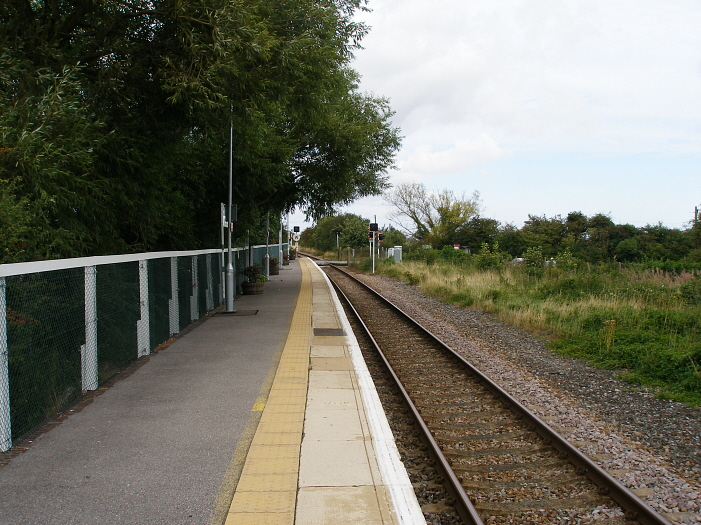 An Ashford-bound view reveals, on the right, the grassed area which was formerly host to a single siding. In the

background is the level crossing, which is equipped with automatic warning lights, but lacks any barriers. In close

proximity to the level crossing are a number of lamps upon poles, which indicate the position of the road and 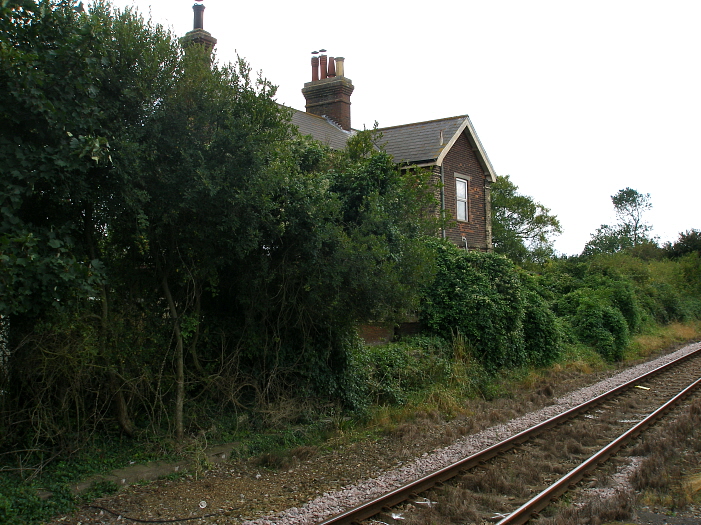 Emerging through the shrubbery is the station building, virtually identical to that still in use at Ham Street. The

station is situated at milepost 84 from London Bridge, via Redhill and Ashford. David Glasspool