The first company to serve Yeovil was the ‘’Bristol & Exeter Railway’’ (B&ER), which had been incorporated on 19th May 1836 to raise a share capital totalling £2,000,000 for a line between Bristol and Exeter. £1,500,000 was to be raised through a shares issue, whilst the remaining £500,000 would be borrowed. Subsequent Acts permitted a further £500,000 of share capital to be raised and an additional £166,000 to be borrowed. Opening of the 75½-mile Broad Gauge line between the two cities occurred on 1st May 1844; by 1849, the B&ER had 86 route miles of line, branches to Clevedon and Tiverton having come into use, in addition to a spur to Weston-Super-Mare. In 1846, the company submitted a Bill to Parliament for the construction of lines from Taunton (Durston Junction) to Castle Cary and Yeovil, combined with a branch from the latter to Crewkerne. This scheme received Royal Assent in 1848, and the 19-mile branch through to Yeovil came into use on 1st October 1853, the line terminating on the town’s western peripheral at Hendford. The Crewkerne proposals were taken no further, and the Somerset town was latterly swallowed up into the empire of the LSWR.

Second to arrive in the area was the Great Western Railway, by means of the ‘’Wilts, Somerset & Weymouth Railway’’. The latter had been incorporated as an independent concern on 30th June 1845, to create a Broad Gauge rail corridor through to the Dorset Coast. This was to branch off from the GWR’s Bristol trunk route at Thingley Junction, just south of Chippenham, and take a course through Westbury, Frome, Castle Cary, and Yeovil, terminating at Weymouth. A branch between Westbury and Salisbury was also included within this scheme, which was dogged by money troubles and delayed construction from the outset. So dire were the independent company’s finances that it prompted the GWR to take over the incomplete project on 14th March 1950 and provide all of the funding. Piecemeal line openings finally took place as follows:

Inroads were soon to be made within GWR territory: on 7th August 1854, the ‘’Salisbury & Yeovil Railway Company’’ (S&YRC) was incorporated to construct a single-track line between its namesakes. In 1857, it was agreed that the LSWR would run the line exclusively, and although the route would initially be single, all bridges, tunnels, and cuttings had to be made to double-track standards. The LSWR nominated two directors to sit on the S&YRC Board, and the former had the option of taking the latter out on a 1000-year lease. Furthermore, after three years had passed since the opening of the extension, the LSWR would have the opportunity to absorb the S&YRC by purchasing all shares and paying off remaining debt. The Salisbury to Sherborne section of the route was the first to open, coming into use on 7th May 1860; extension of services to Yeovil occurred on 1st June of the same year. During 1859, the S&YRC had submitted an additional Bill to Parliament to permit connections to be made with the B&ER at the western end of the line. A northward deviation from the east to west course of the route, south of Yeovil, was sanctioned, to allow the S&YRC to meet the B&ER’s Taunton branch. The LSWR, which operated the Yeovil extension from the outset, terminated at the Hendford station of the B&ER.

The LSWR was swift in its efforts to take the railway beyond Yeovil, and in under two months, services had been extended to Exeter, trains terminating at Exeter Queen Street from 19th July 1860. The 1860 works produced an independent station for the LSWR on the southern fringes of Yeovil, upon the Salisbury route, and new connections were made with the B&ER’s line. A triangular junction east of the LSWR’s new station site, which had been christened ‘’Yeovil Junction’’, was formed (later shown in diagrammatic form). The layout afforded trains travelling towards either Exeter or London direct access to the B&ER’s Hendford terminus, which itself was replaced by a new joint passenger station, Yeovil Town, on 1st June 1861. A maze of lines presented themselves here, for the triangular junction created between Salisbury and Taunton lines also straddled the single-track Broad Gauge route between Castle Cary and Weymouth. The layout was complicated further on the advent of the ‘’Clifton Maybank’’ branch, a short single-track Broad Gauge spur off the Pen Mill to Weymouth route, which terminated on the southern side of the LSWR’s Junction station. Powers for laying this branch had been secured on 25th May 1860, and the branch came into use on 3rd June 1864, its raison d’être being for the transfer of goods traffic between GWR and LSWR systems. The spur took its name from a small Dorset parish, located south of the LSWR main line, and ascended to the Junction station at a gradient of 1 in 85.

In 1870, the Salisbury to Exeter route became a double-track affair. As a prelude to the works, the eastern side of the triangular junction between the main line and Yeovil Town was eliminated on 1st January 1870, the track bed subsequently becoming a footpath. The western side of the triangle was retained for a dedicated shuttle service between Junction and Town stations. At this time, Yeovil Junction comprised an unusual layout of two island platforms separated by just a single-track: thus, a train stabled between the platforms could be accessed from either side. The central track was dedicated to the Yeovil Town shuttle service, whilst through trains were routed on the outer platform lines. The latter followed the severe curvature of the platform edges, requiring a 20 MPH to be enforced on all trains passing through. Such restrictive operating practices eventually led to inevitable station rebuilding in the following century (more of later). A trio of LSWR sidings existed immediately below the southern island platform, beyond which were the Broad Gauge tracks of the GWR’s Clifton Maybank branch. The sidings also provided a feeder to a 50-foot 1-inch turntable, positioned at the western extremity of the site, on the ‘’down’’ side of the station. Situated just to the east of this was a 50-foot-long brick-built shed, a GWR structure, which was used to transfer goods between the railway systems. Physical connections with the incoming GWR Clifton Maybank branch were possible when the line was converted to Standard Gauge over the weekend of 18th to 22nd June 1874; the branch could only be used in the daylight hours. North of the station, on the ‘’up’’ side, existed a trio of eastward-facing sidings, in addition to loop line which avoided the platforms. These were accompanied by an attractive pitched-roof goods shed, about 40-feet in length, fabricated from local stone.

Track plan of Yeovil Junction as of 1925. Included are the connections with Yeovil Town and the Clifton Maybank branch. Click the above for a larger version. Drawn by David Glasspool 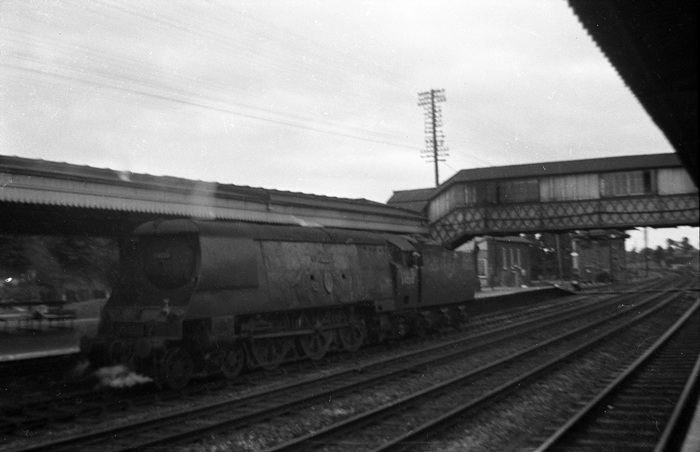 This view of an Unrebuilt ''Battle of Britain'' Class, looking in the Exeter direction, includes the ''down'' side canopy and the southern half of the footbridge, both of which are now long gone. Beyond the footbridge, which was shortened in 1973, can be seen the water tower (marked on the above diagram), a barrow crossing across all four lines, and the ex-GWR transfer shed, the latter of which survives today. © David Glasspool Collection 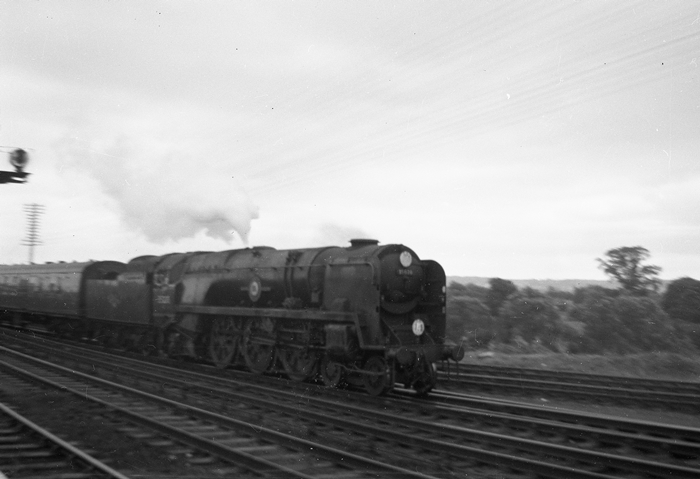 A rebuilt Merchant Navy Class, wearing a Plymouth head code, is seen approaching the platforms from the London direction. The disc above the train, to the left, is sitting upon the signal gantry at the eastern end of the ''up'' island. © David Glasspool Collection