The first route through Catford was that of the ''Mid-Kent & North Kent Junction Railway's'', a concern which had been formed in 1855 to connect the SER's North Kent Line with the metals of the ''West End of London & Crystal Palace Railway''. A four mile line was laid between Lewisham and Beckenham: this came into use on 1st January 1857, with intermediate stations at Ladywell, Catford Bridge, and Lower Sydenham, and Lewisham received a ''Junction'' suffix. The route was worked by the SER from the outset. The LC&DR (or, rather, ''East Kent Railway'') did not even have a section of operational track by this time, and it would be another thirty-five years until the company was to pass through the district with its own suburban line. It was in 1884 that the LC&DR began lobbying Parliament to obtain powers to construct a connecting route between Nunhead and Shortlands, which could become a relief line for the existing trunk route through Sydenham Hill. A station at Nunhead itself had come into use on 1st September 1871 on the company's 1865-opened branch to Crystal Palace (High Level). This was in preparation for the commencement of a then new branch line operation through to Blackheath Hill (which eventually extended to Greenwich), the first trains running on this route on 18th September 1871. It took half a decade for Royal Assent to be granted for the construction of the 4.7-mile long double-track relief line, and the project was to be undertaken by the nominally independent ''Shortlands & Nunhead Railway Company'', which had been formally created on 12th August 1889. Completion of the line came in 1892, the first scheduled passenger services running on 1st July of that year. The LC&DR leased the line from the original building company until 1896, when the larger organisation absorbed it. A second station to serve Catford had opened with the route.

The relief line of 1892 crossed over the older SER route of 1857 at Catford, but no physical connection between the two was made. The former was perched above the high street upon an embankment whilst, conversely, the SER line resided below street level. Catford and Catford Bridge stations were positioned on the sections of the lines which laid virtually parallel with each other: the sites were no more than 250 feet apart. Whilst the SER site was an imposing one, demonstrating a substantial yellow-brick two-storey high Station Master's house on the ''up'' side, complete with similarly-constructed single-storey structures on the ''down'' side, the LC&DR arrangement was, in comparison, modest. The fact that the latter station was perched upon an embankment limited the range of buildings which could be accommodated. Furthermore, the requirement to save weight also resulted in those structures up at rail level - the waiting accommodation and platforms - to be fabricated wholly of timber. Catford was unique along the loop line, for it was the only site to feature high-level platforms. Such a design feature also ensured that it was the only station on the route to lack a footbridge, and any traversing between platforms was done by walking underneath the running lines. The main station building here was located on the ''up'' side, conforming to the positioning of other such structures along the route, but it was the only example to lie below the running lines. Excepting some minor detail differences, the main building was virtually identical in design to its counterpart at Ravensbourne: it was single-storey, of red brick construction, and demonstrated pitched roof sections and square window frames. Regrettably, neither buildings still exist, but thankfully, their design traits – the pitched roof sections and window frame design – can still be observed on the surviving station building at Beckenham Hill. Another feature shared by all Catford Loop Line stations were the pitched-roof canopies of identical design, every example being 125-foot long. At all stations except for Catford, these canopies were backed at their rear by red-brick walls, but the fact that the platforms at the line's namesake were upon an embankment, weight-saving measures decreed that the canopies would instead be wholly backed at their rear by timber. Each platform was reached from ground level via an enclosed staircase, the cross-sectional shape of which was identical to that of the footbridges found at the Loop Line's other stations.

The elevated position of the station ensured that no goods facilities were ever present here, but nevertheless, the site still had claim to its own signal box. Contractors Saxby & Farmer were drafted in to signal the Catford Loop, and one of this company's attractive cabins appeared at the northern extremity of the ''down'' platform. The design of the cabins along this route was identical to the examples still in existence along the ex-SER line to Thanet, at Wye and Sturry. However, whilst those at ground level along the Loop demonstrated a timber upper-half with a brick base, that at Catford was a wholly wooden affair, again in the name of weight saving.

The first major changes at the site occurred under SE&CR ownership. This company replaced the existing pitched-roof canopies at Catford with equally attractive upward-sloping types, the latter being to the design still in existence at Ravensbourne. The Southern Railway subsequently made a significant mark on the entire route, as part of its electrification scheme of ex-SE&CR suburban lines. The Catford Loop was incorporated into the electrification of the route from Holborn Viaduct to Orpington via Nunhead, which saw EMU crew training begin along those lines on 1st April 1925. A full suburban EMU service began on 12th July of the same year. Typically, stations witnessed their platform surfaces being lengthened, but Catford's elevated position posed a challenge. The 450-foot platforms here required extending at their northern ends by a further 120-feet (including end ramps), but naturally, there was no terra-firma underneath on which to support them. Consequently, the SR constructed an iron girder frame alongside each of the railway arches here, which raised up to track level to support the prefabricated concrete platform extensions. The existing wooden platform surfaces at this time were also replaced with concrete cast components, matching the extensions. The traditional diamond-shaped gas lamps of the SE&CR were replaced with the now familiar SR concrete bracket posts. As a result of the platform lengthening, the Saxby & Farmer cabin ended up in a mid-platform position, as so often happened to such structures at sites which were later the recipients of such works.

The British Railways era proved to be one of total transformation for the site. Such change was initiated as part of Phase 1 of the Kent Coast Electrification: new colour aspect light signalling saw the abolition of the Saxby & Farmer signal cabin's functions at Catford on 22nd March 1959. Whilst the full ''Chatham'' line EMU timetable came into use on 15th June of that year, the Catford Loop continued to experience steam-hauled workings on diversion until the full electrification of the ex-SER trunk line in June 1962. By the late 1960s, a new series of cheap modular building designs began gathering momentum: CLASP (Consortium of Local Authorities Special Programme). Sadly, several stations were rebuilt using this dreadful system, and such occurred at Catford during 1971. The ''up'' side station building of 1892 was demolished and its former site allowed to return to nature, whilst a dreary single-storey CLASP ticket office appeared beside the ''down'' entrance. At platform level, the picture was similarly bleak, and all structures were razed to the ground, only to be replaced by featureless waiting accommodation comparable in appearance to a portakabin. The staircases leading up to the platforms remained enclosed, but the original timber design of 1892 was dispensed with, and in its place came square-shaped corrugated metal covered footways, these being identical in appearance to the enclosed flights of stairs of Dartford station's 1973 footbridge. A third rebuilding of the station, this time only partial, occurred during 1994. This included the removal of the staircases' covering, subsequently leaving them exposed to the elements, and the demolition of the depressing 1971 portakabins on the platforms. The latter were replaced by equally uninspiring bus shelter-style structures, thus keeping Catford as one of the South Eastern Division's somewhat depressing ''modern image'' stations. Finally, during the 1980s, the station was subject to closure for a number of months due to embankment subsidence. During closure, both platform surfaces were completely rebuilt upon strengthened terrain, utilising concrete struts. 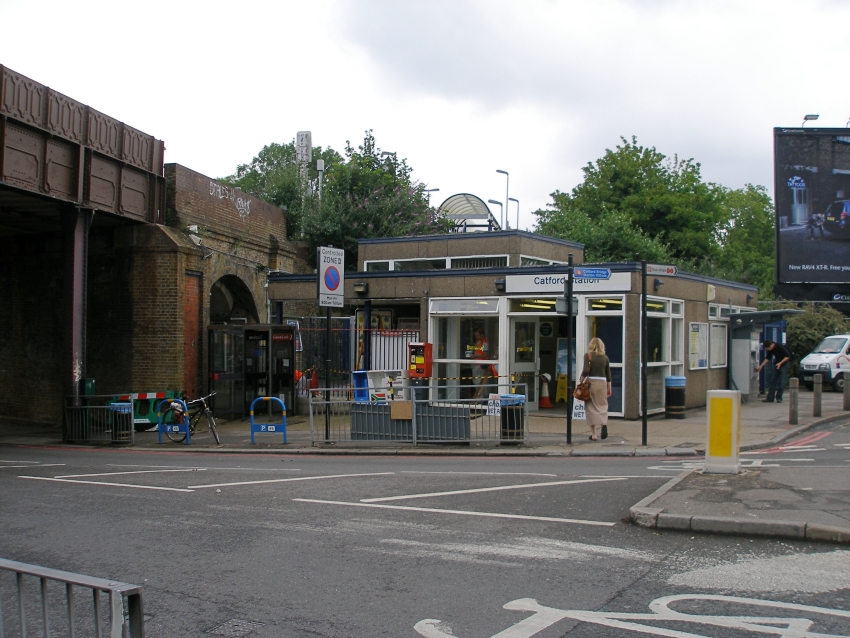 the brick arch and the railway bridge. The dreary CLASP structure of 1971 is all too apparent, and above it,

in the background, can be seen the curved roof of the platform shelter of 1994. David Glasspool 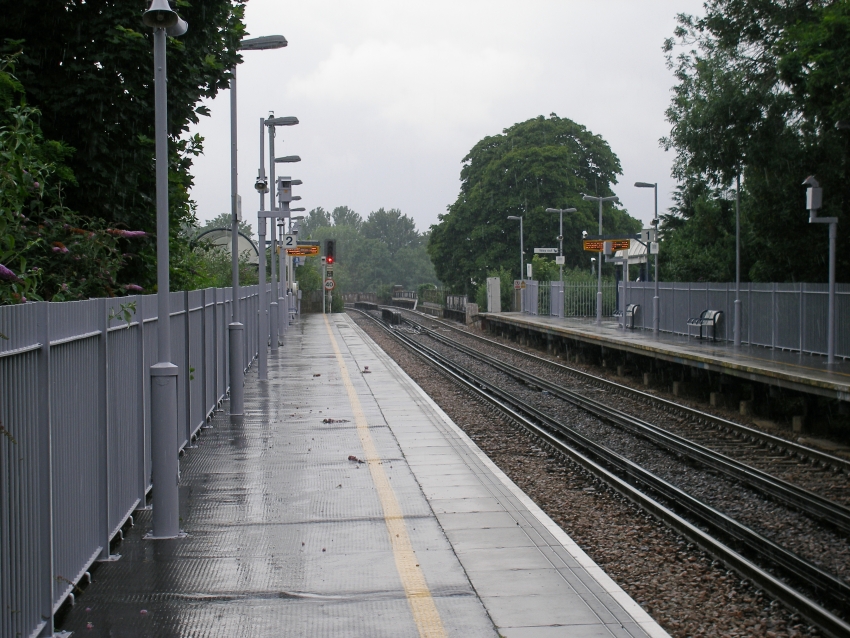 This southward view, taken during a downpour on 18th June 2007, shows the high-level platforms during a

programme of repainting. Both waiting shelters are just about visible, and the line here is subject to a 40 MPH 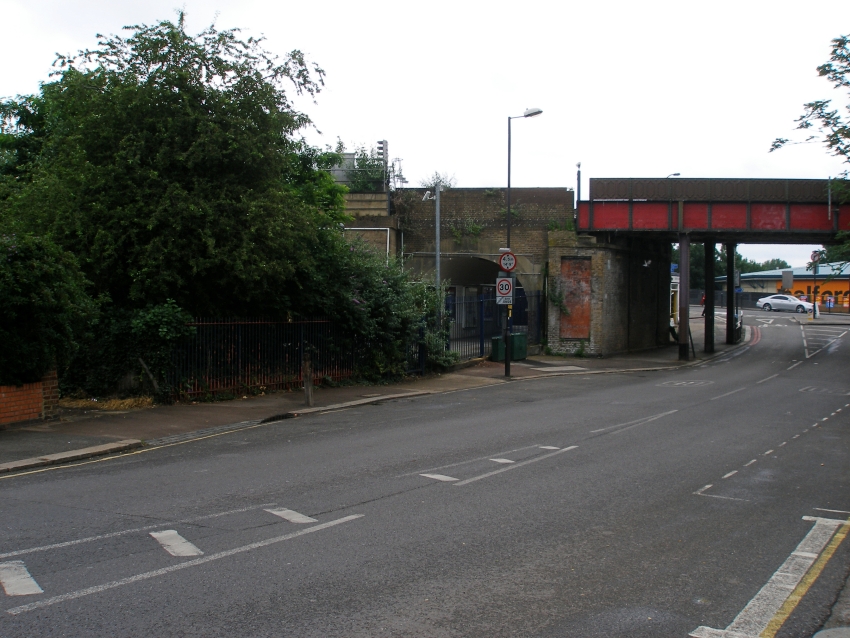 This eastward view on 18th June 2007, from the opposite side of the railway bridge, reveals the former site of

the station building of 1892: it is now occupied by a multitude of bushes. The arched underpass between platforms

is also clearly visible: an enclosed ground-level walkway was once evident between the original station building

and the arch. David Glasspool